The Blizzard 90-27 is one of the most exciting bikes in Rock Machine lineup. Thanks to its 170-160 mm suspension travel and aggressive geometry it can descend anywhere with confidence, and isn’t humiliated when the trail changes into a climb. 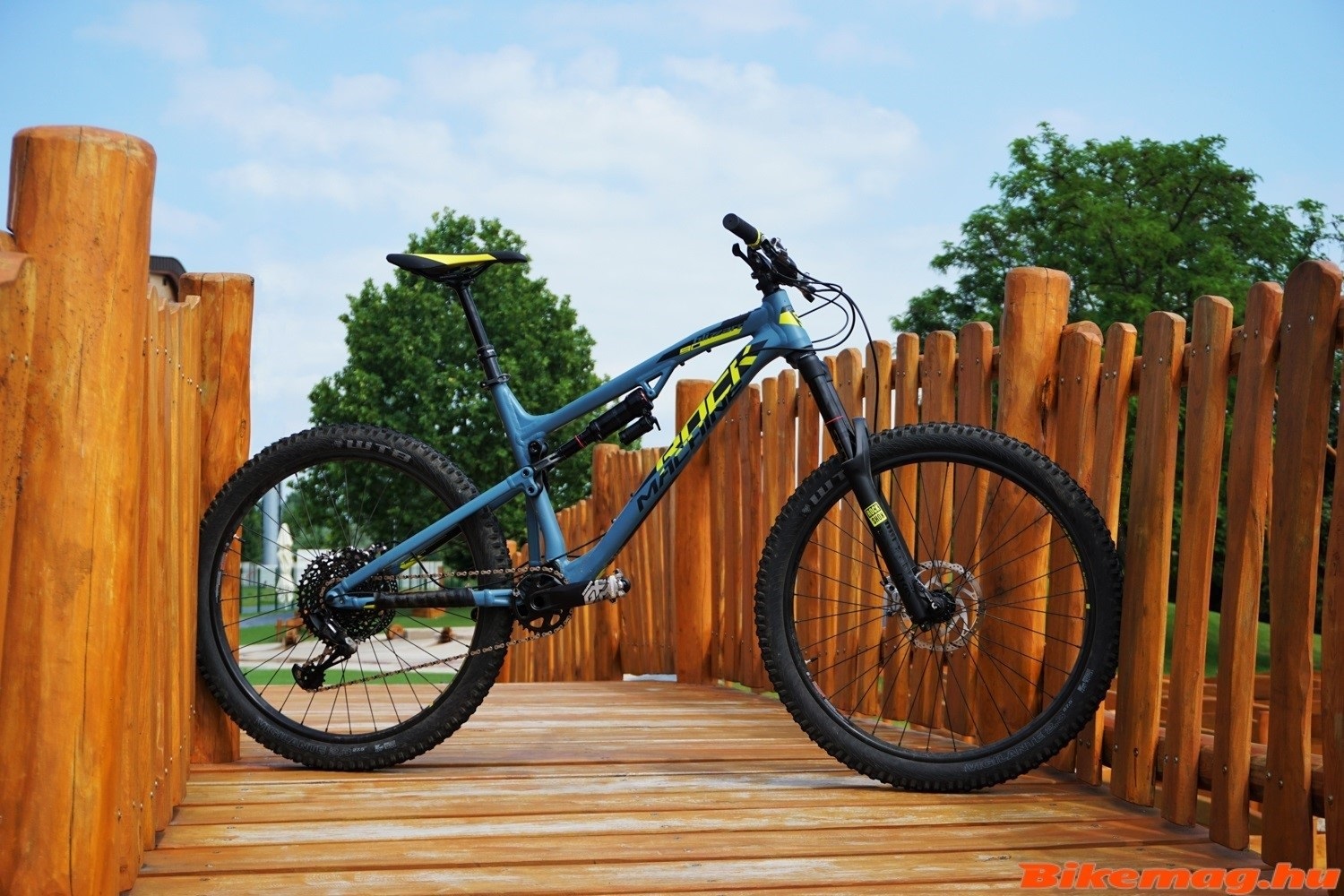 It’s no blunder this bike is called a “blizzard”: Rock Machine likely to have given this name since it tackles challenging slopes with such tempo, that the snowfall would simply be blown away by the bike’s scud. I guess the name “avalanche” would have been just as perfect!

As you may remember, last year we reviewed another Rock Machine Blizzard to our greatest satisfaction, it was also a top-of-the-range 90, but a 27+ tire size version with less suspension travel. The present Blizzard sibling has longer travel with conventional 27.5 wheels, and so we were eager to find out not only how it compares not only to the competition, but also to the “little brother” we have ridden last year. 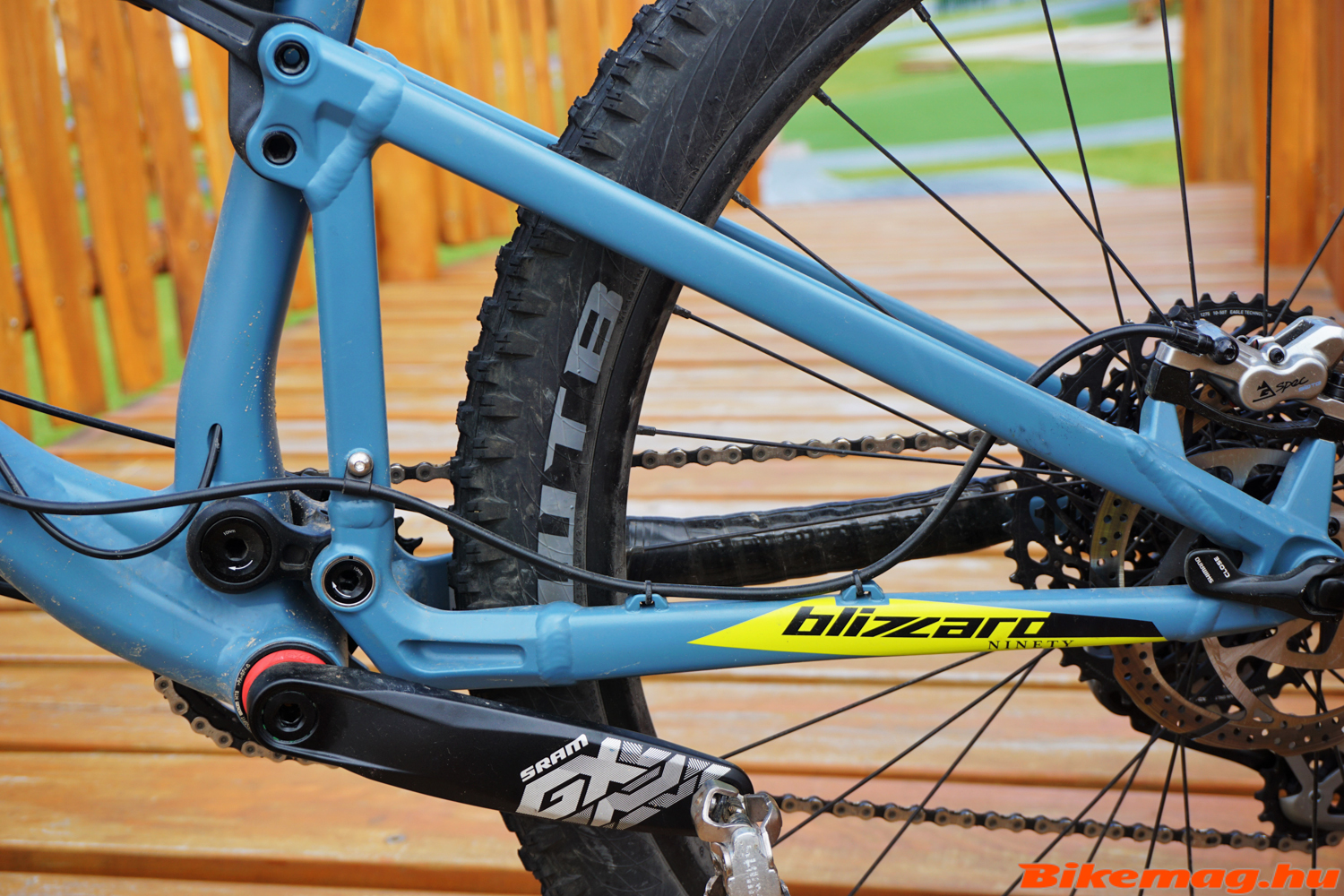 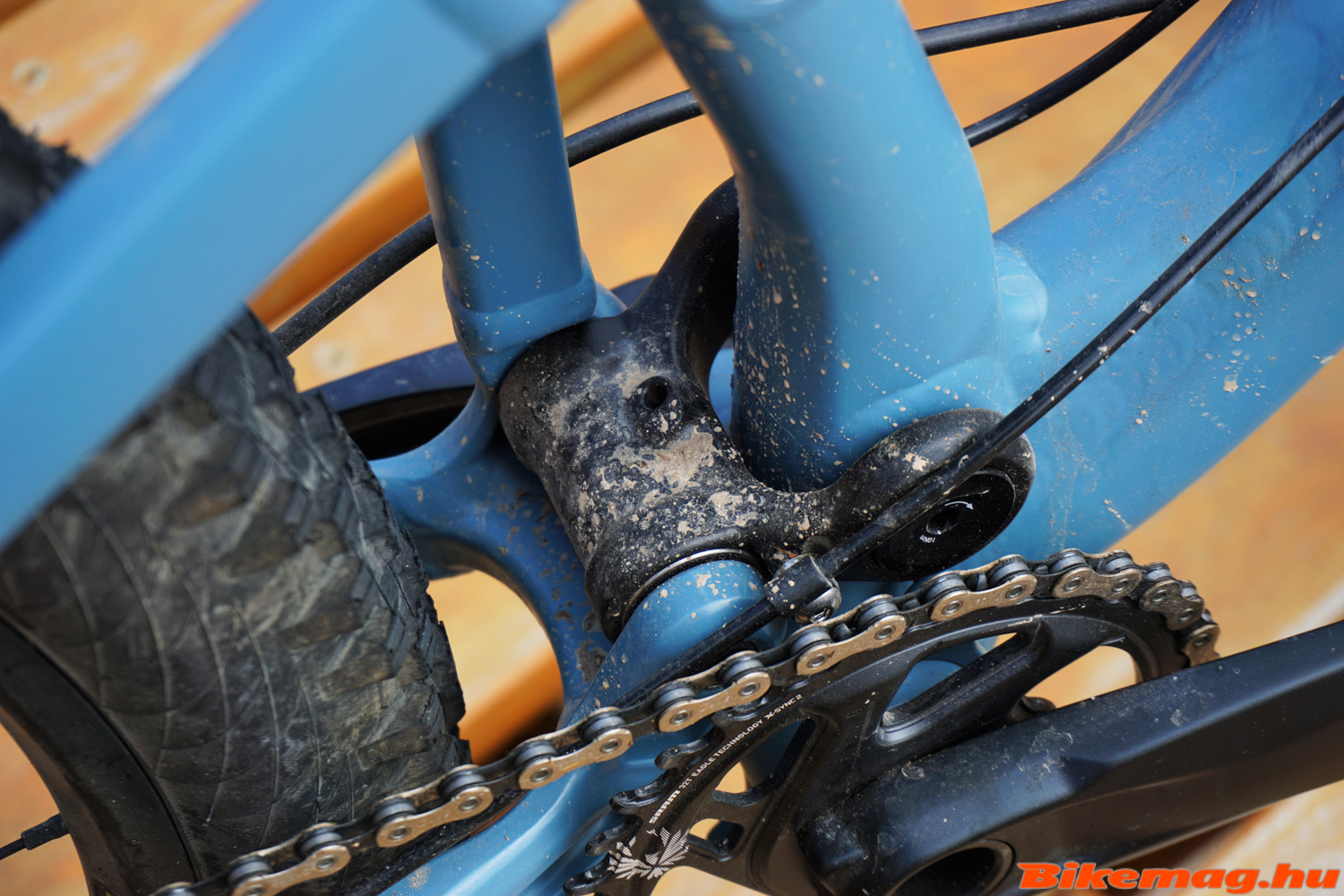 Blizzard 90-27 showcases all Rock Machine’s trademark technical features, such as the Floating Pivot Suspension (FPS) system, which — with the addition of Smart Link — responds to impacts coming from the ground with exceptional sensitivity, while still managing to avoid blocking the rear suspension under hard braking. The Sharkspine EVO top tube design is also a trademark of Rock Machine bikes, and the Blizzard makes use of this advanced frame construction. The tube shape resembling the shark’s back provides lower standover for the frame to aid changing position over the bike, consequently it allows a rider of shorter statue to choose a larger frame size with a longer cockpit. You can read about this design in greater detail following this link. 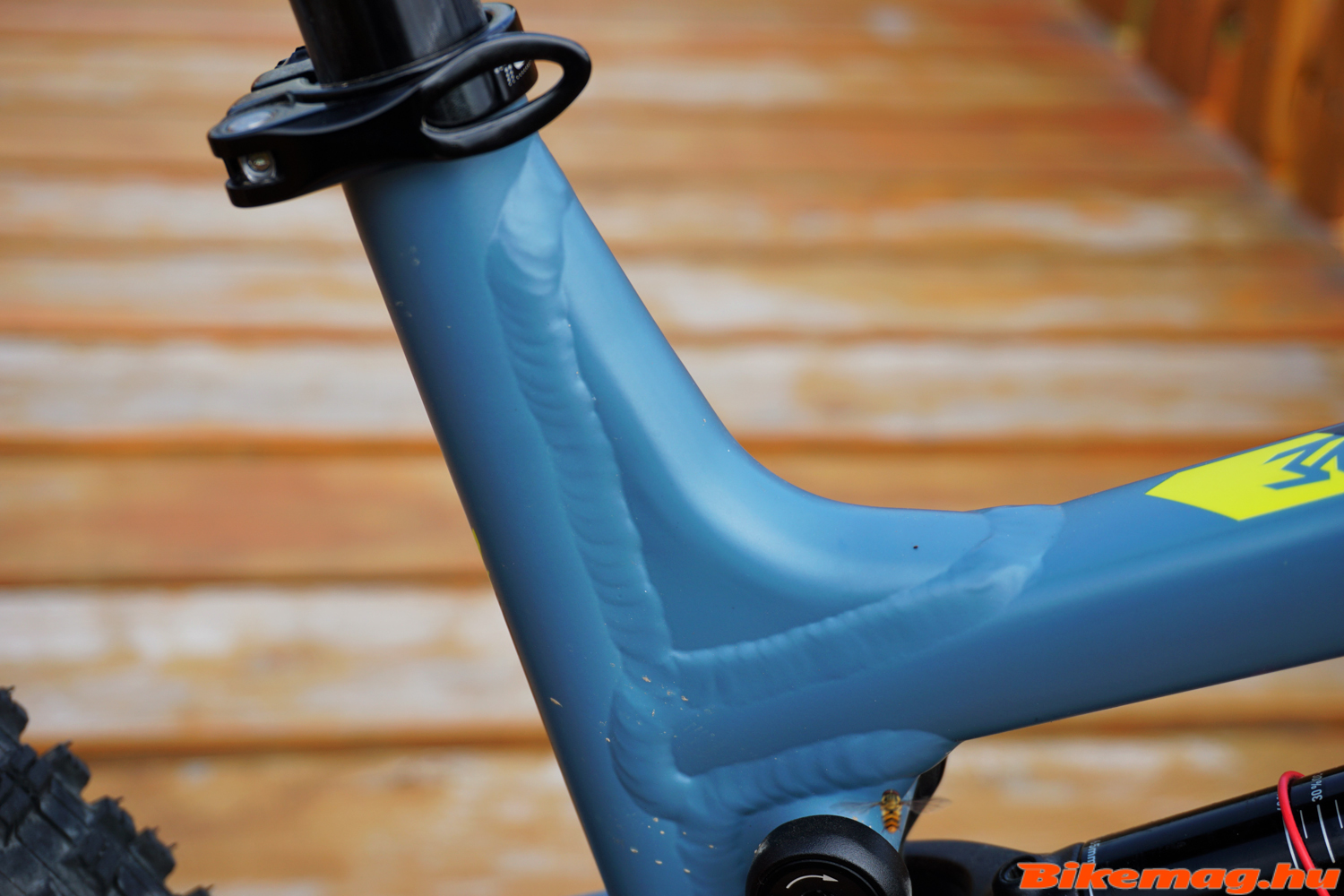 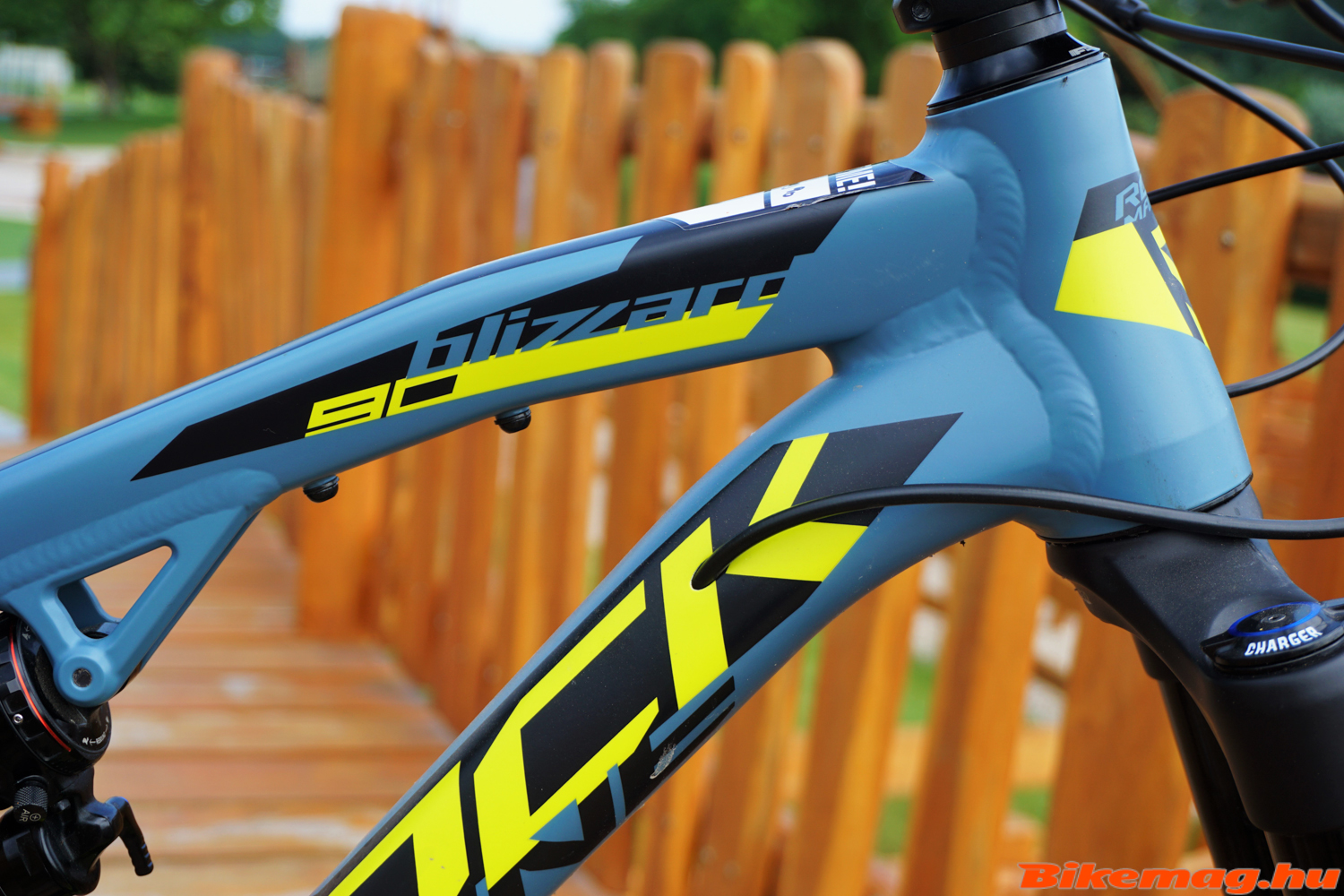 According to current trends, the Blizzard 90-27 features concealed cable routing and a tapered head tube along with a BOOST 148 × 12 mm thru axle at the back for a stronger rear wheel interface. 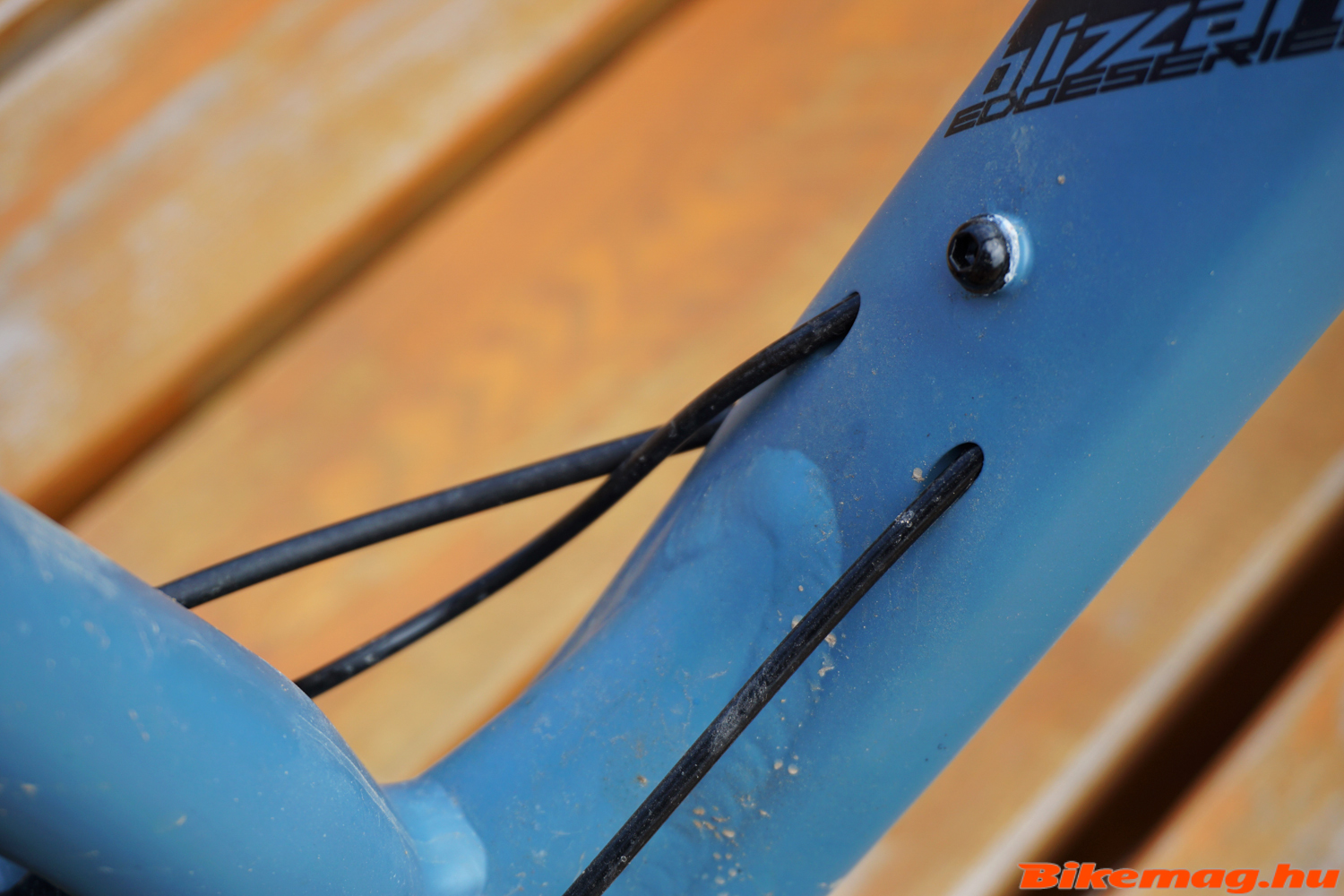 The 160 mm travel and FPS system provide excellent downhill performance for this bike, and the suspension range puts the Blizzard right in the middle of the enduro bike category. Rock Machine also defines the bike for this type of riding, so the intended application is a clear cut. The heart of the system is top class rear shock, the Rock Shox Super Deluxe RC3 DebonAir, providing a multitude of adjustment possibilities, hence allowing the Blizzard to be set up perfectly for the given terrain and condition. The 3-stage compression dampening adjustment is ideal if you not only want to roll on descends, but also pedal. In the so-called “pedal” and “lockout” modes, the rear suspension moves much less under pedaling, wasting much less energy from rider input. The lower attachment point of the shock is also unique: instead of the conventional pivot mounting, it is bolted first to a “Y” shaped piece, which in turn is fixed in two points to the rear swing arm. The so-called Smart Link transmits forces from the rocker with maximum utilization of the suspension travel without the undesirable „shutting off” in the last third of its travel. The 2019 Blizzard model will come with the Super Deluxe Coil RCT, featuring a steel spring instead of air, thereby further enhancing sensitivity, and cutting down on overheating issues on extreme long slopes under heavier riders. 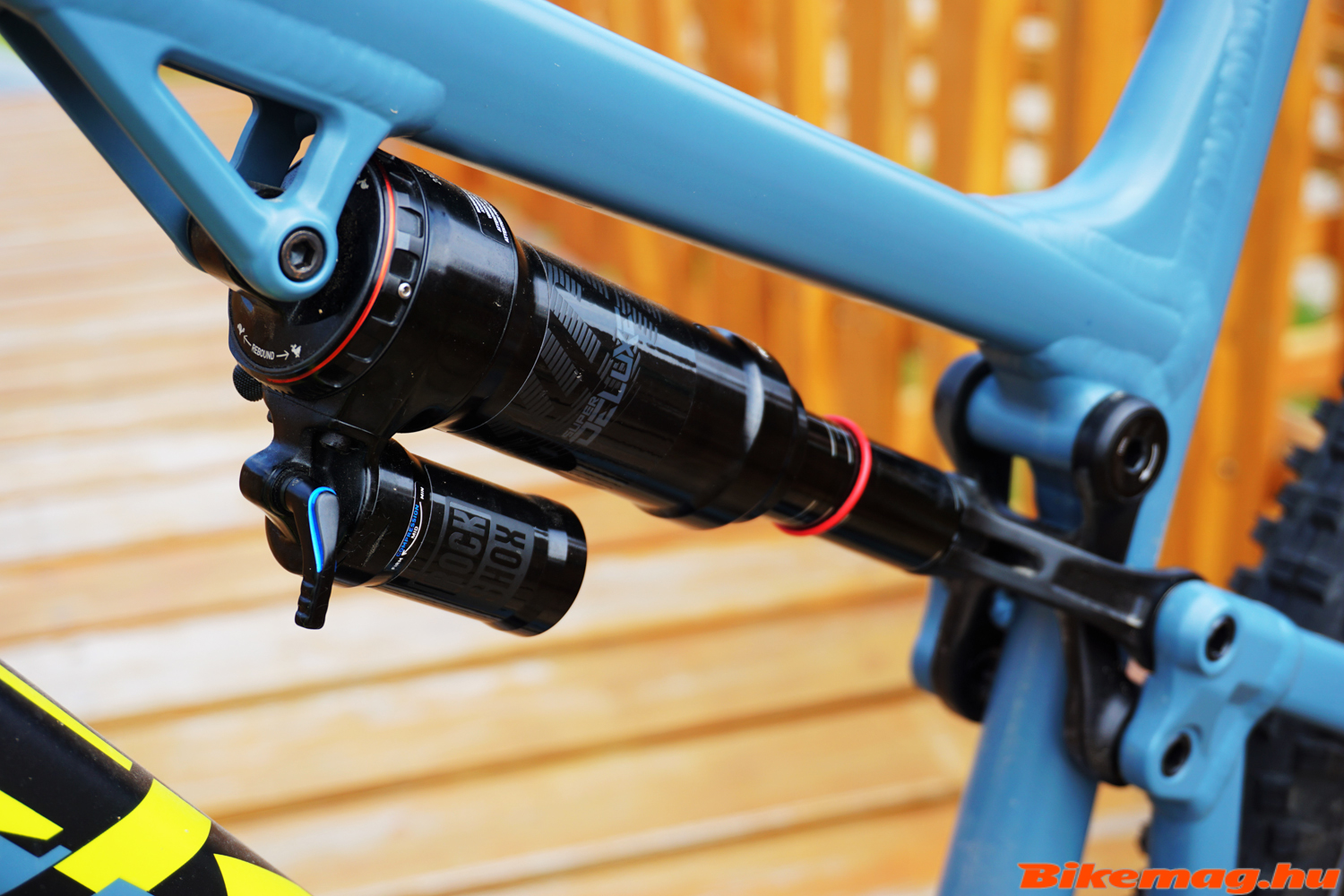 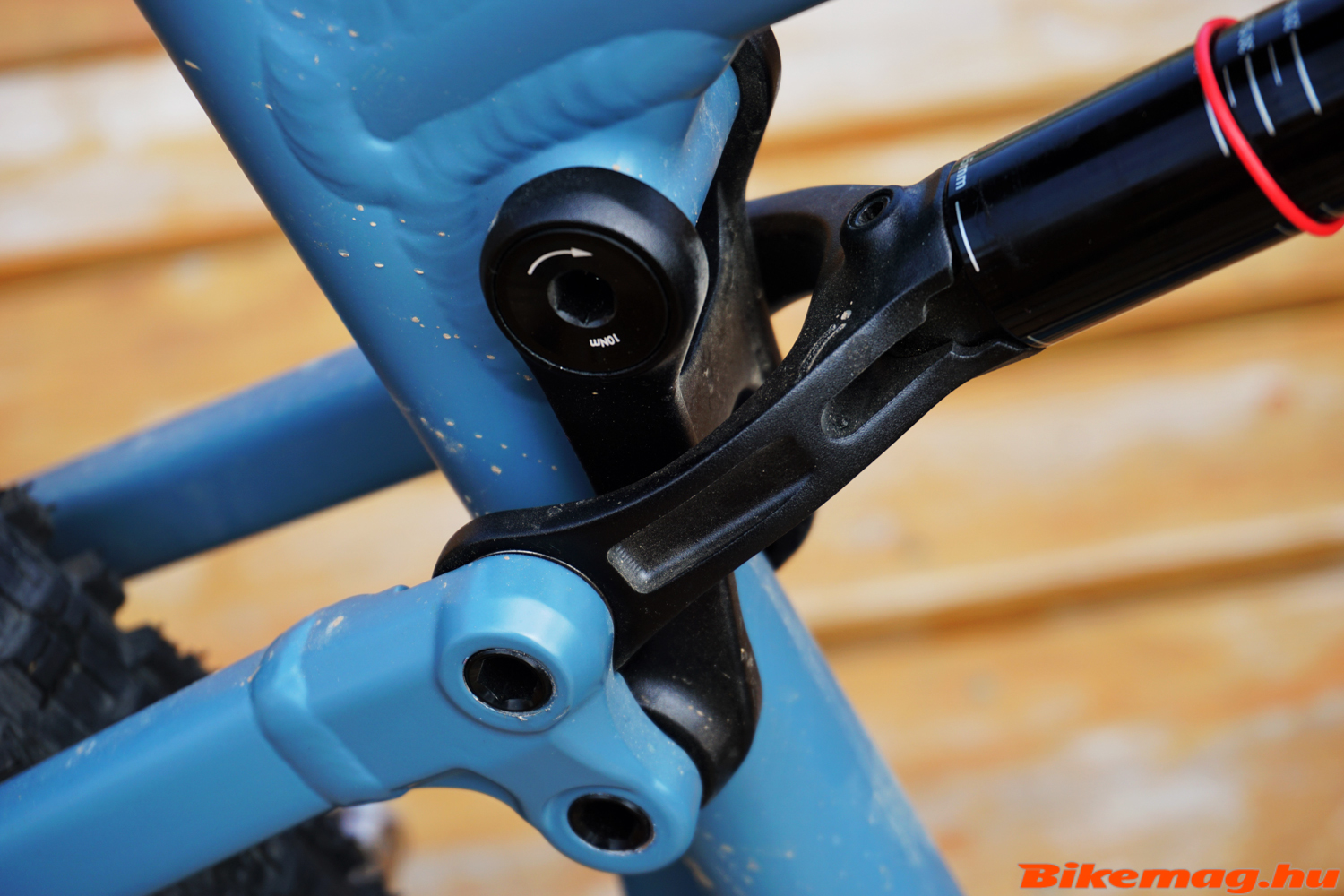 A Rock Shox Lyrik RC with a 170 mm travel performs the suspension duties in front, which is the perfect choice for Enduro riding. It’s plenty strong, stiff, has adjustment for rebound and low-speed compression dampening, in a word it’s everything one could ask from a fork designed for this application. 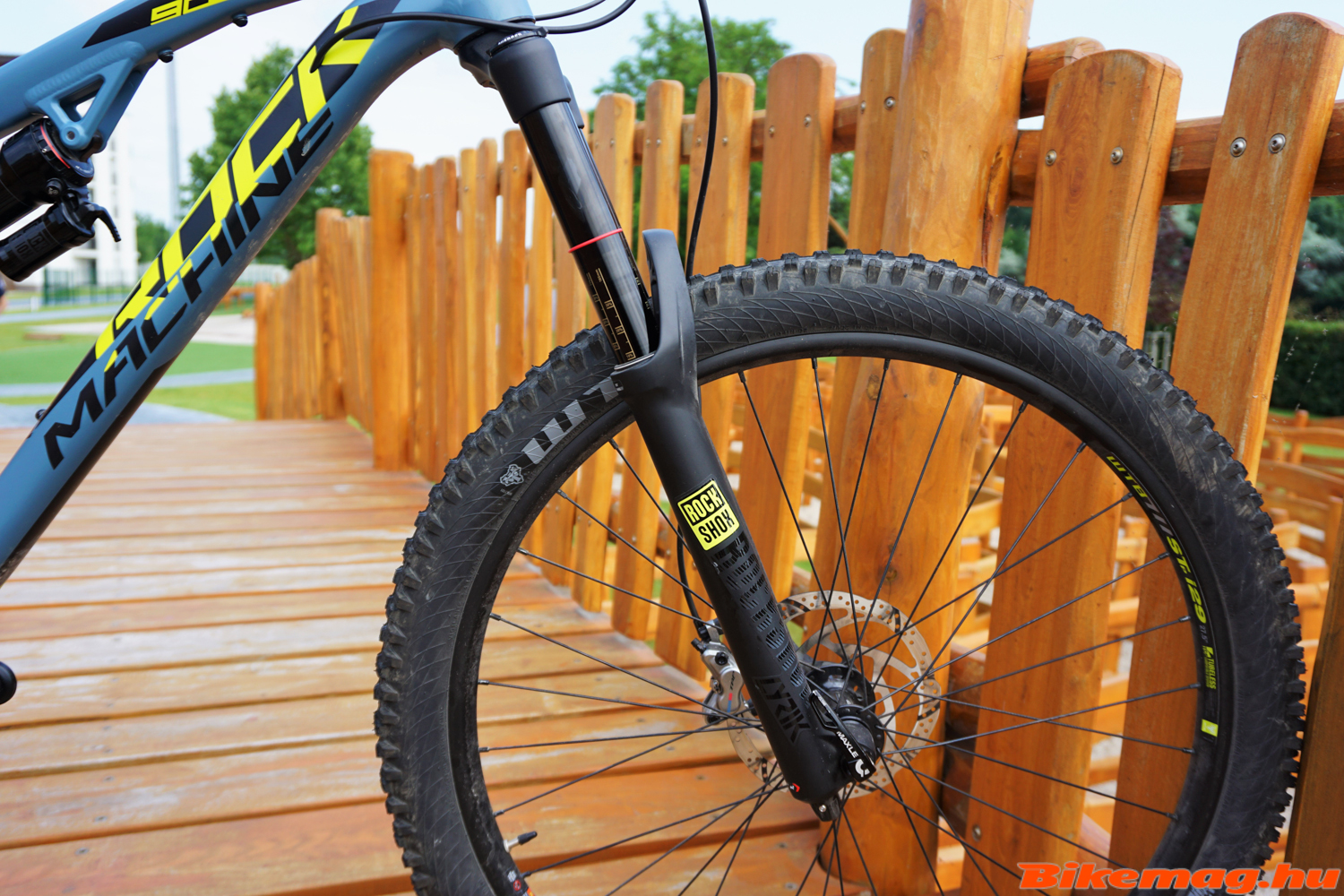 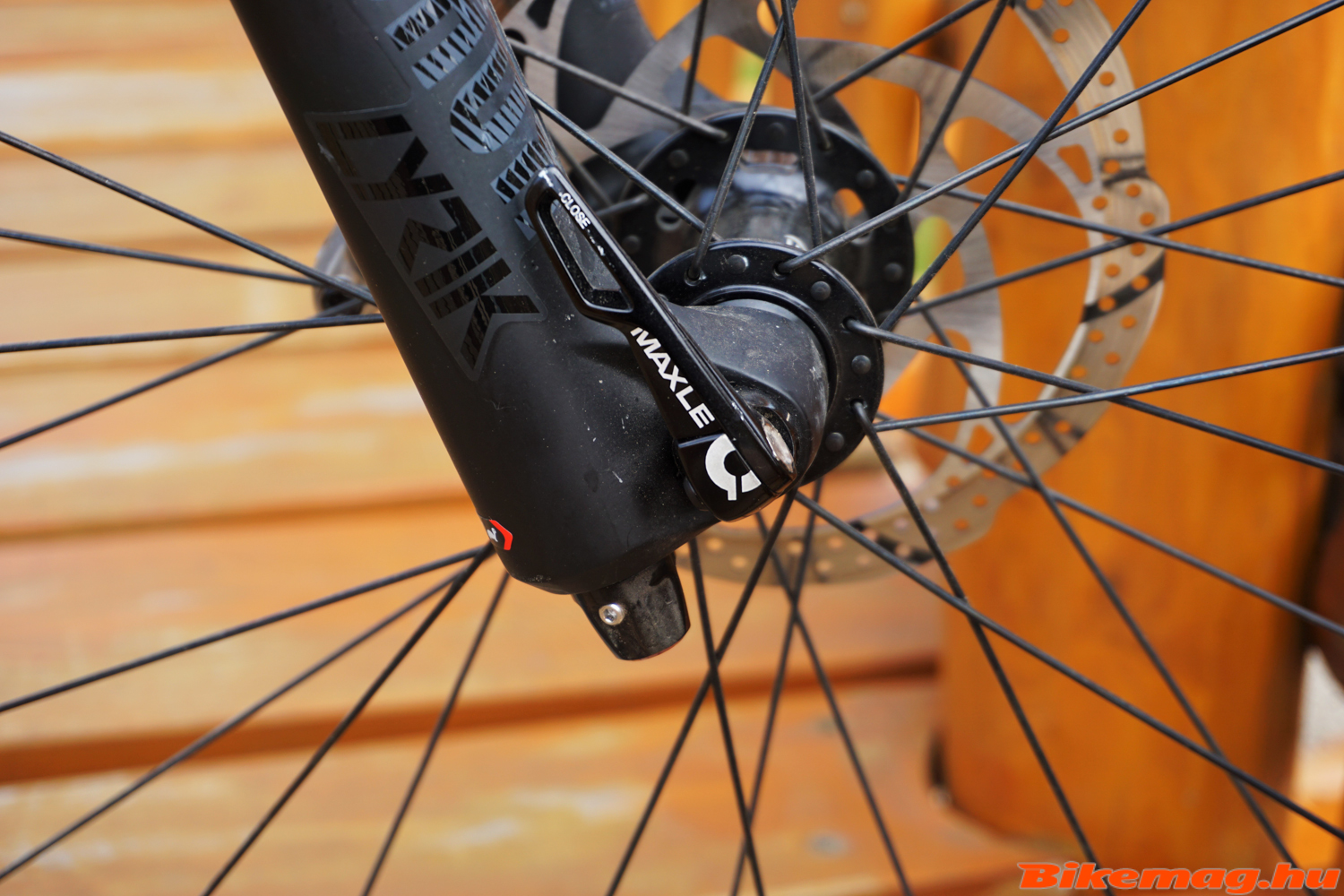 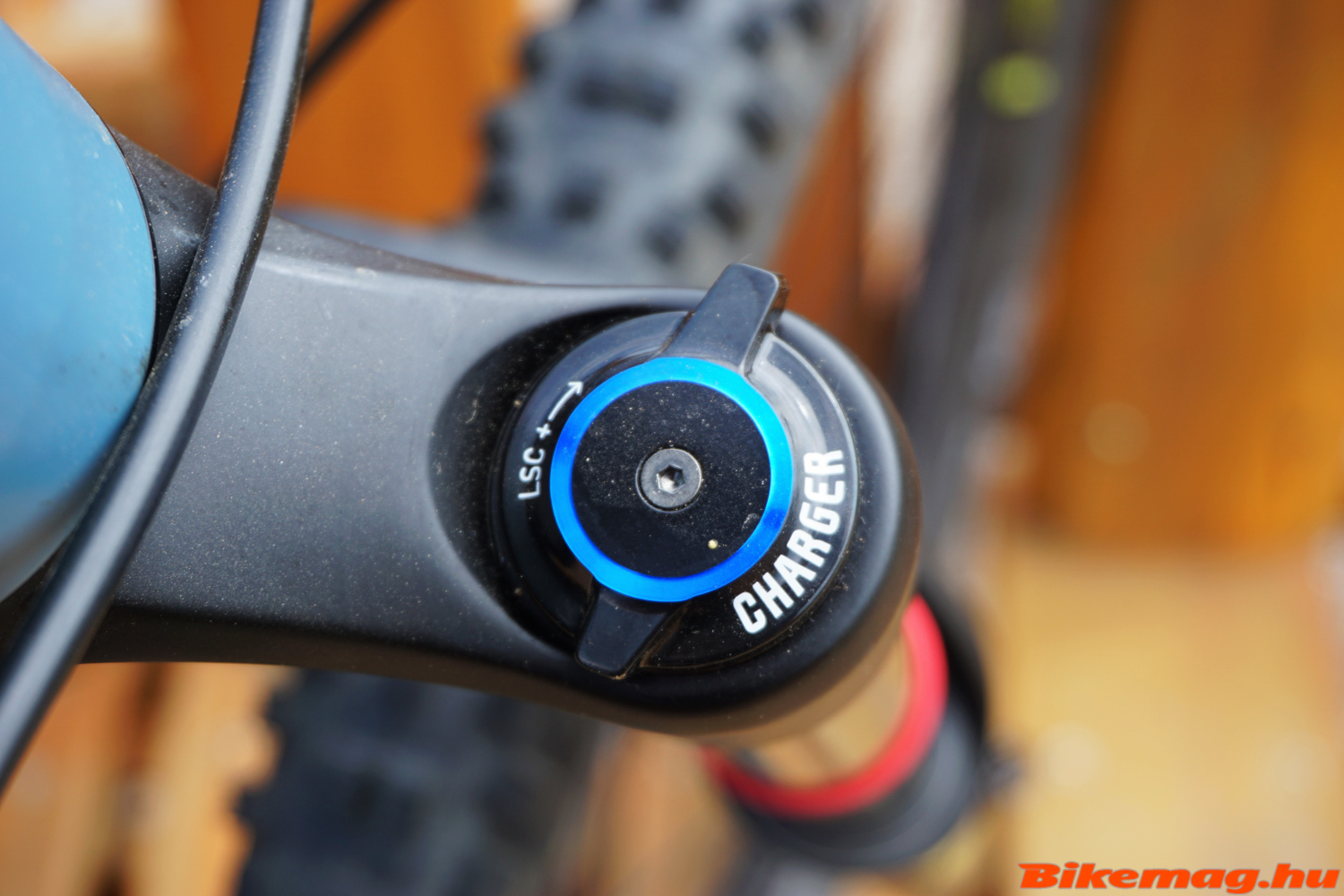 Shifting duties are handled entirely by the SRAM GX set, it’s a 1×12 system with a 32T BOOST crankset and a 10-50T rear cassette. This gearing is more or less adequate for most riding conditions, the low range is perfect for the bike allowing it to tackle any uphill gradient, but since it can be ridden so fast on the descents, you may sometimes run out of gear flying downhill. Mind you, this only happens at insane speeds! It is also possible to modify the gearing by replacing the front chain ring with something bigger, something I would recommend if the riding involves more downhills. 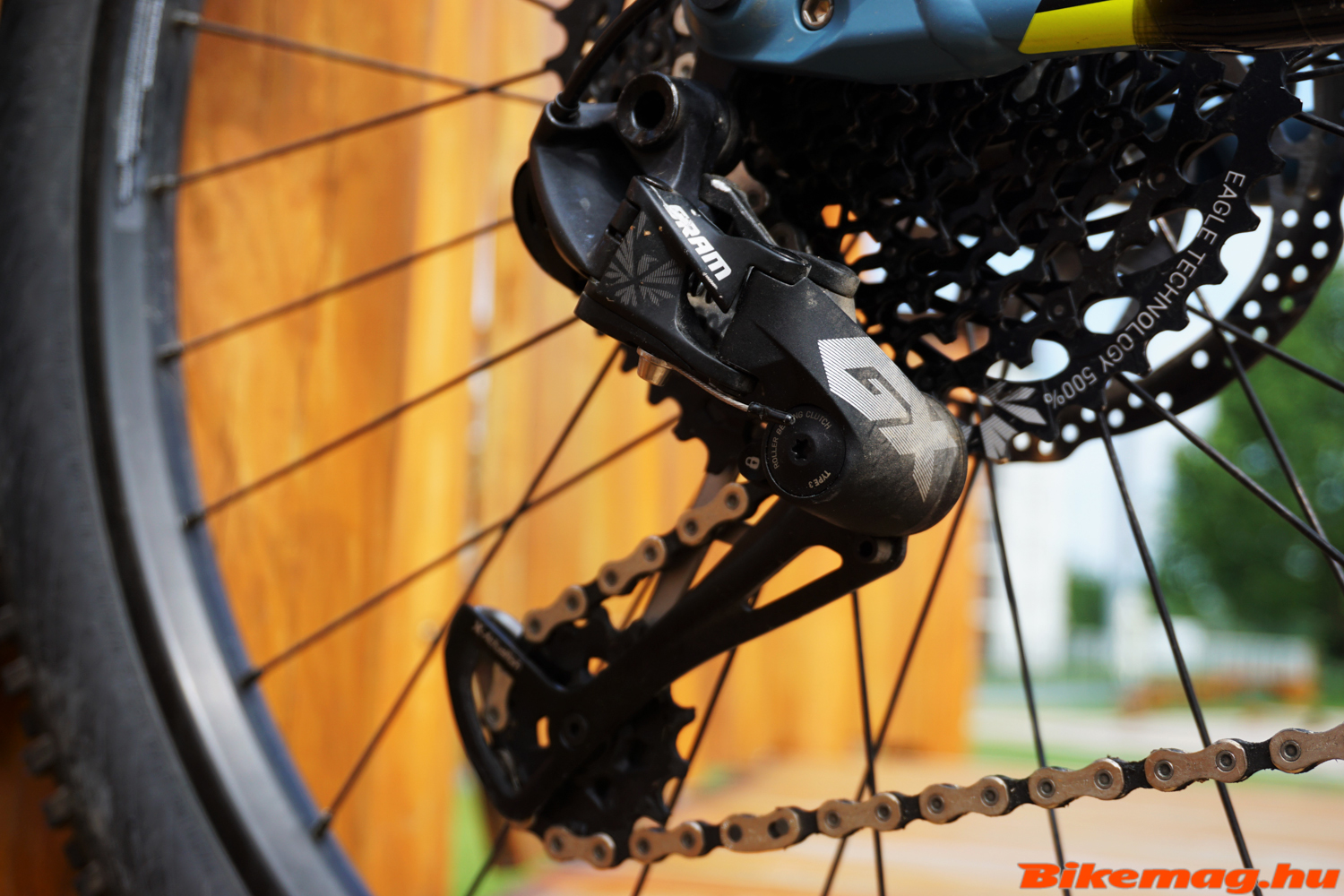 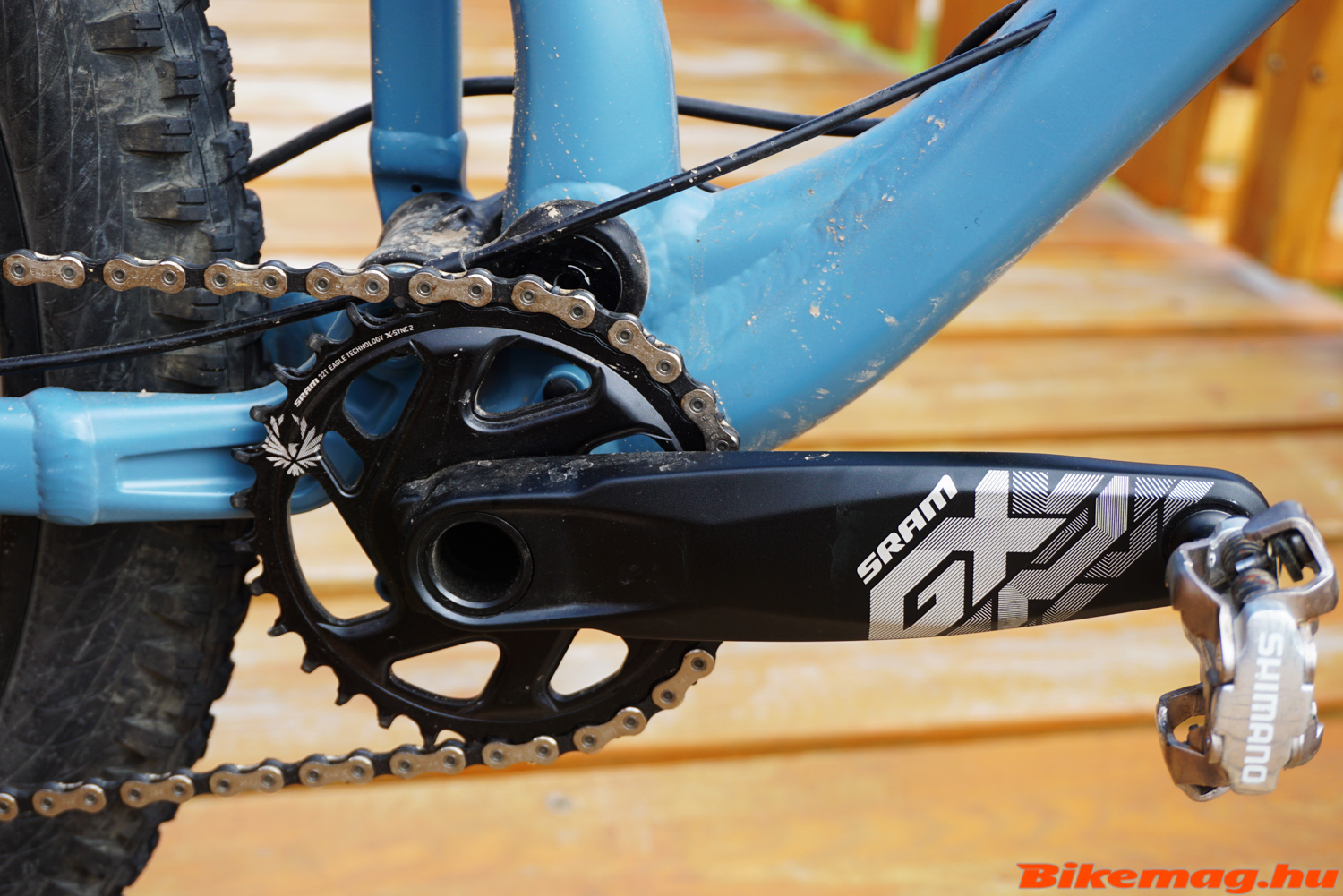 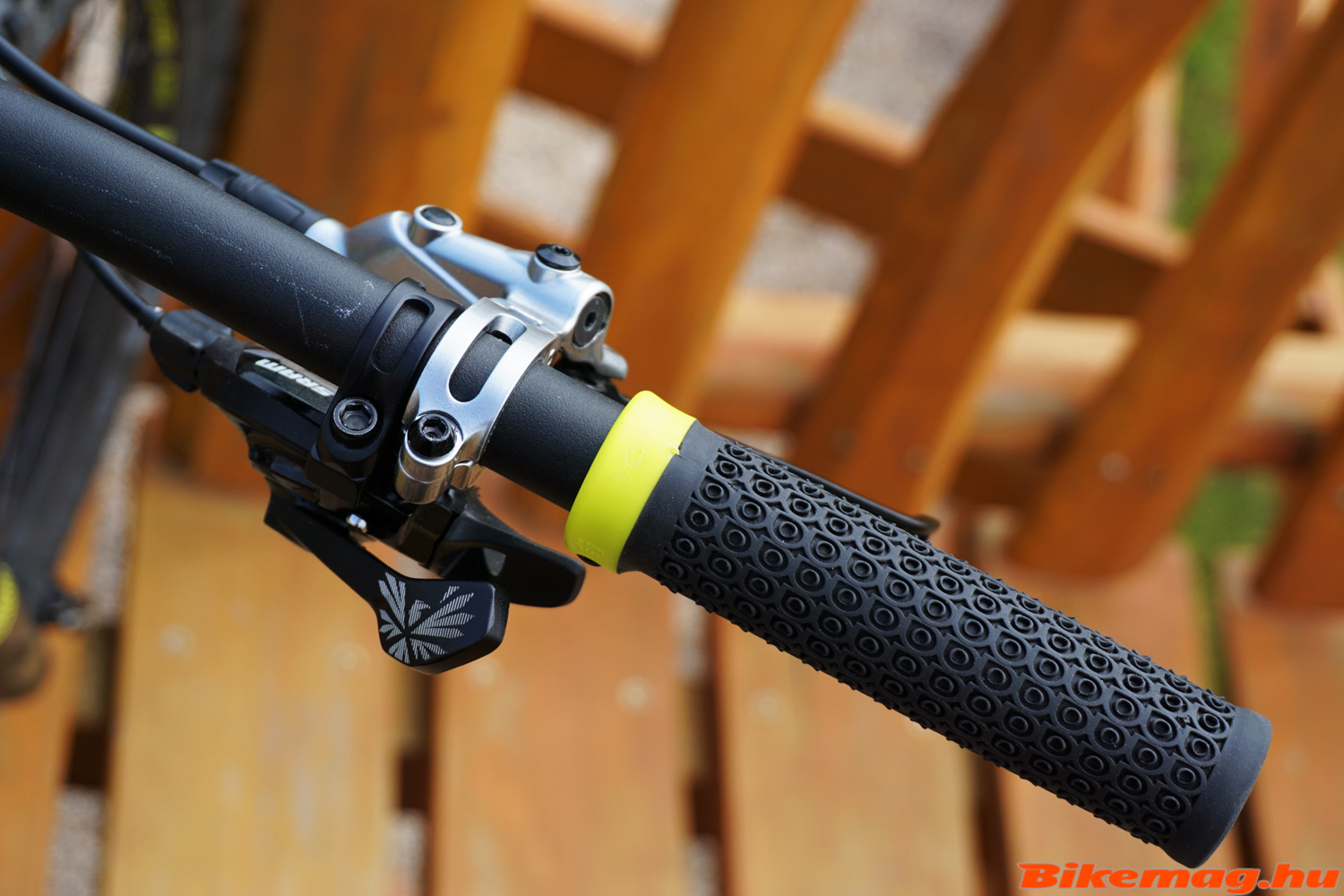 I consider the brake choice for the Blizzard 90-27 to be a bit from left field, since TRP hydraulic disc brakes on production bikes is a rare sight these days. Moreover the TRP Slate G-Spec HD-M820 is specifically designed for extreme MTB use, demonstrated by its 4 piston construction and the 200 mm front, 180 mm rear discs. I also have to mention that they look darn good! 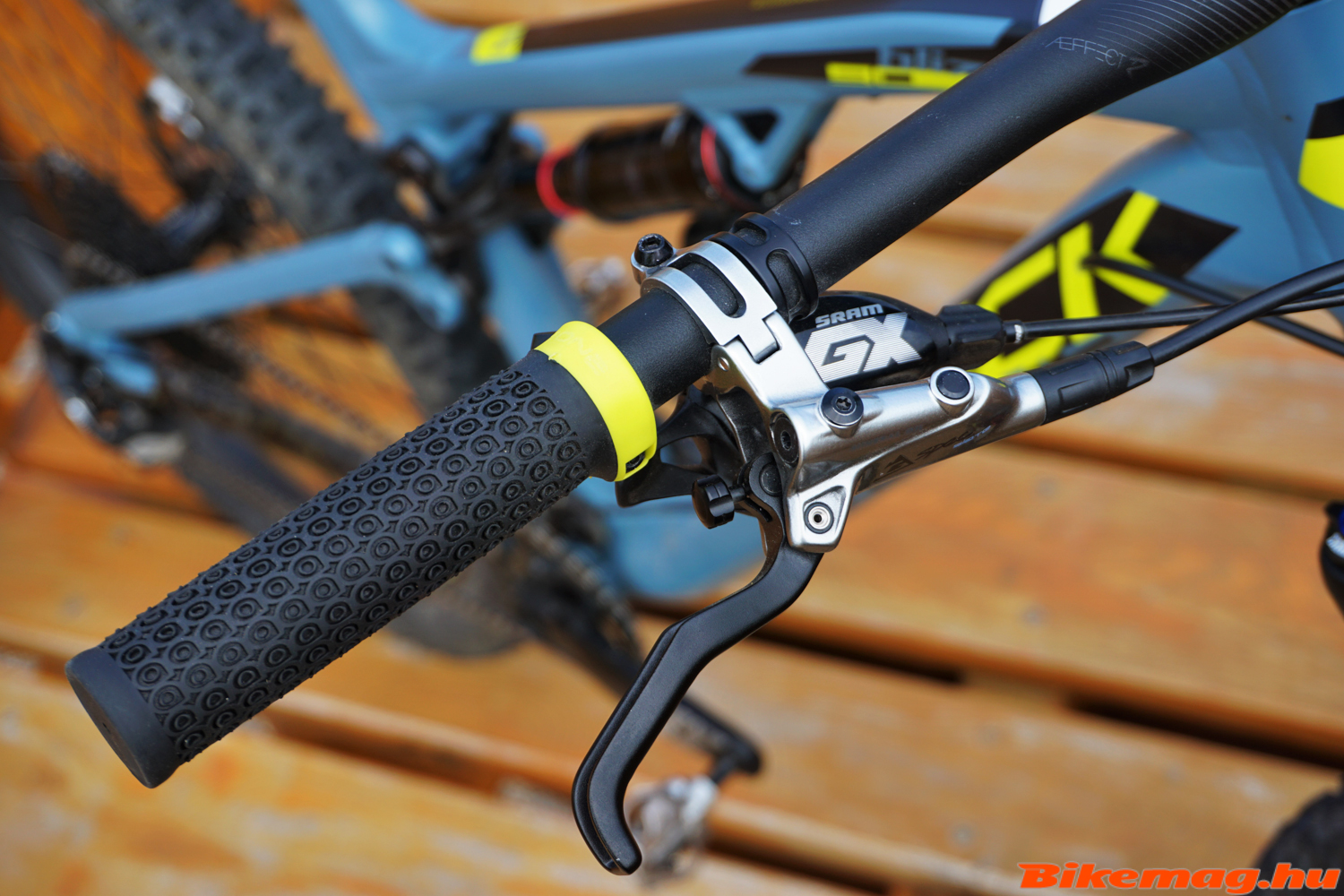 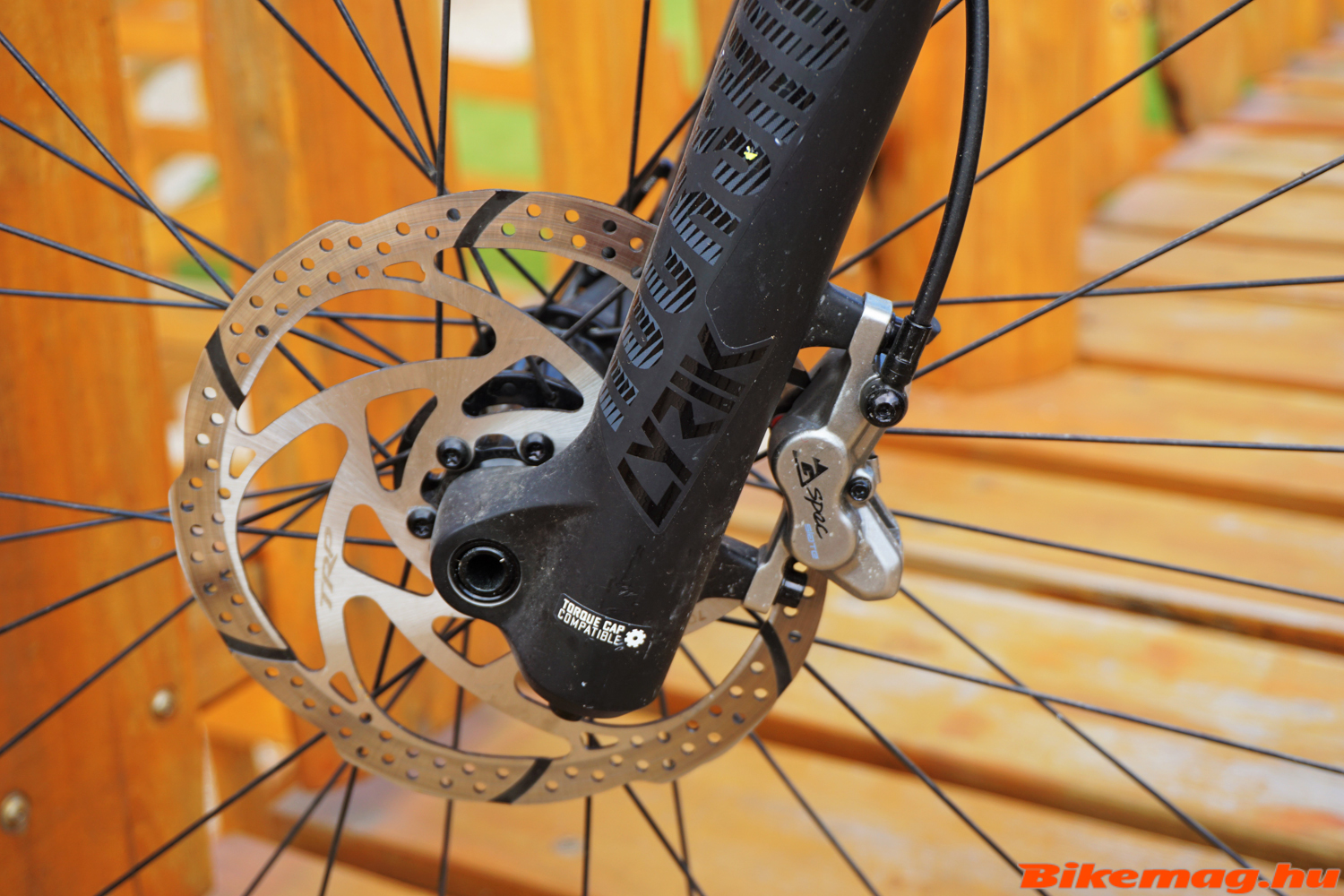 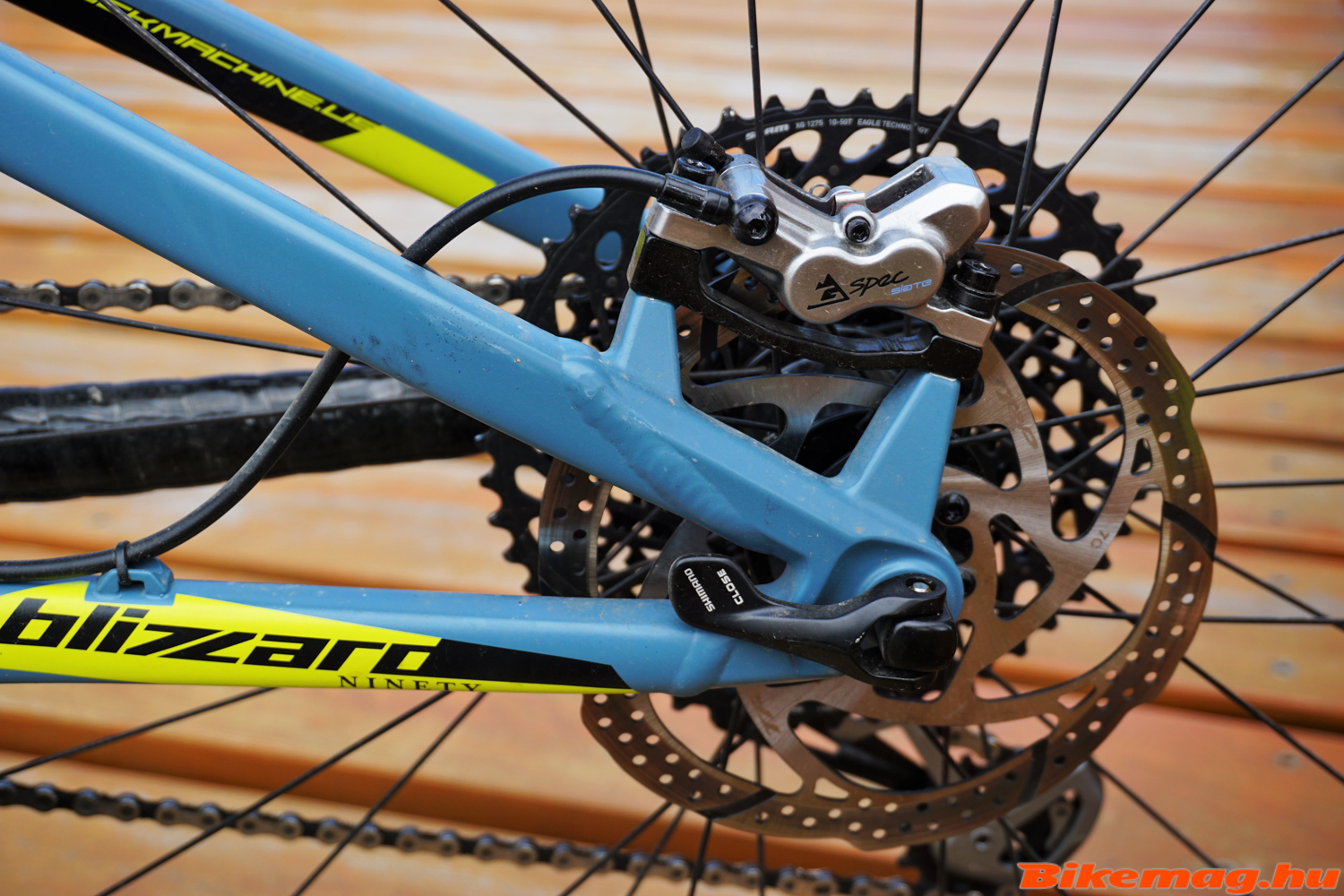 Concerning the wheel set, WTB STP i29 rims are laced to Bitex hubs, resulting in a sturdy construction, making it an ideal choice from Rock Machine designers. The tires are also from the WTB range, the Vigilante offers an aggressive tread pattern and full tubeless compatibility. 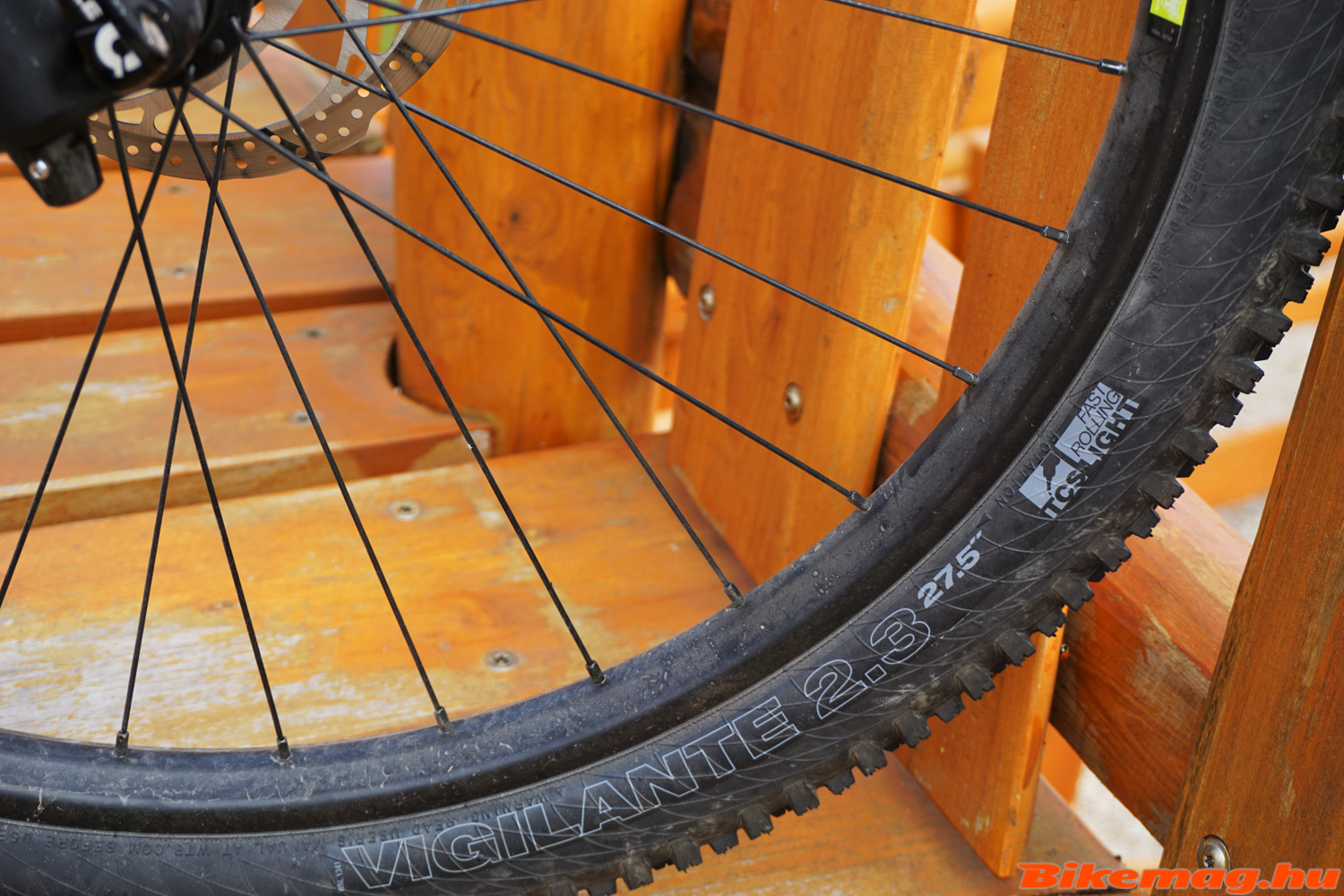 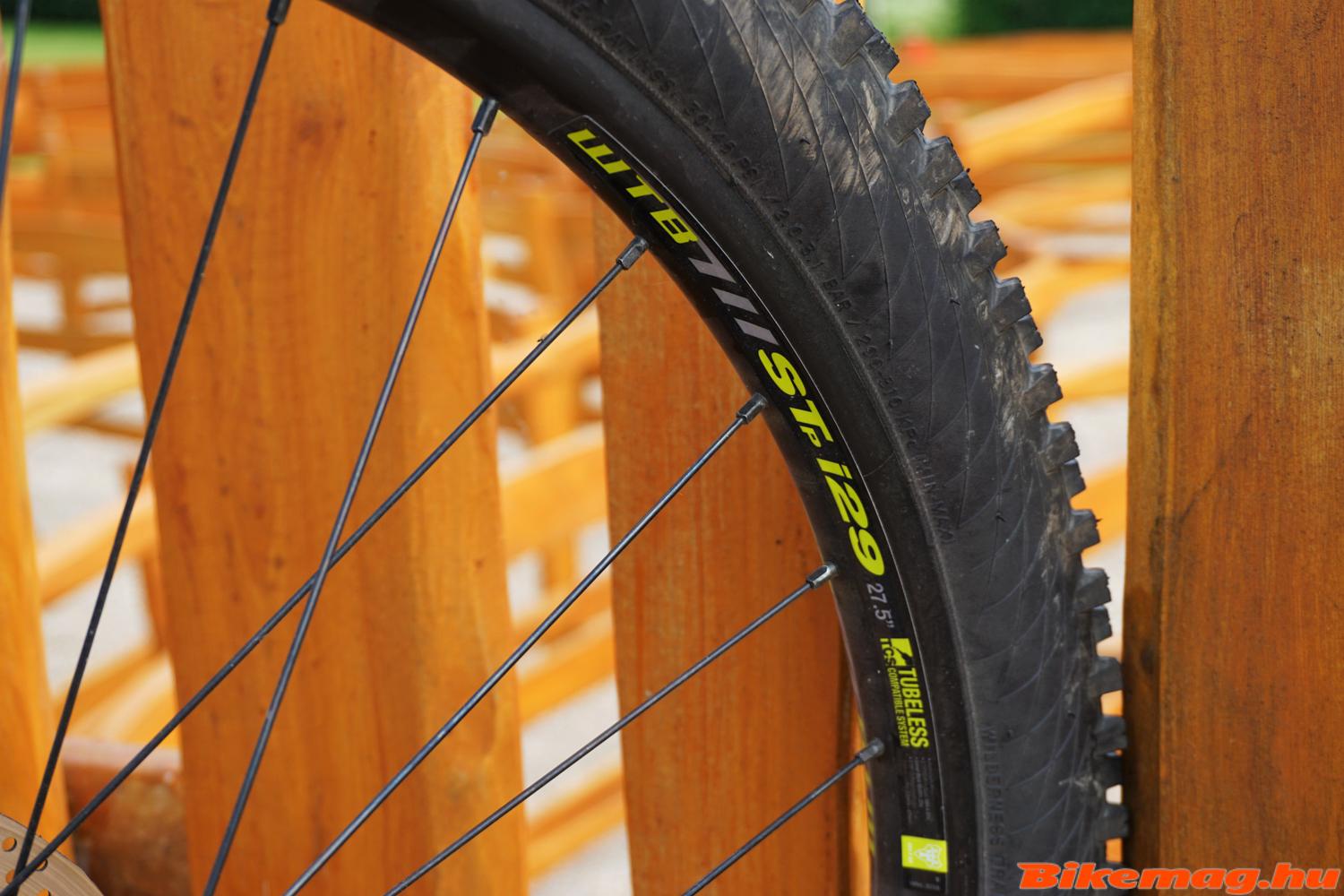 With the exception of the saddle, all accessories – seat post, handlebar and stem – come from the Race Face Aeffect series. The stem is a mere 35 mm long, handlebar rise is also 35 mm, along with a 35 mm clamp diameter. The dropper seat post breaks with this magic number, since it can be lowered by no less than 125 mm from the handlebar. 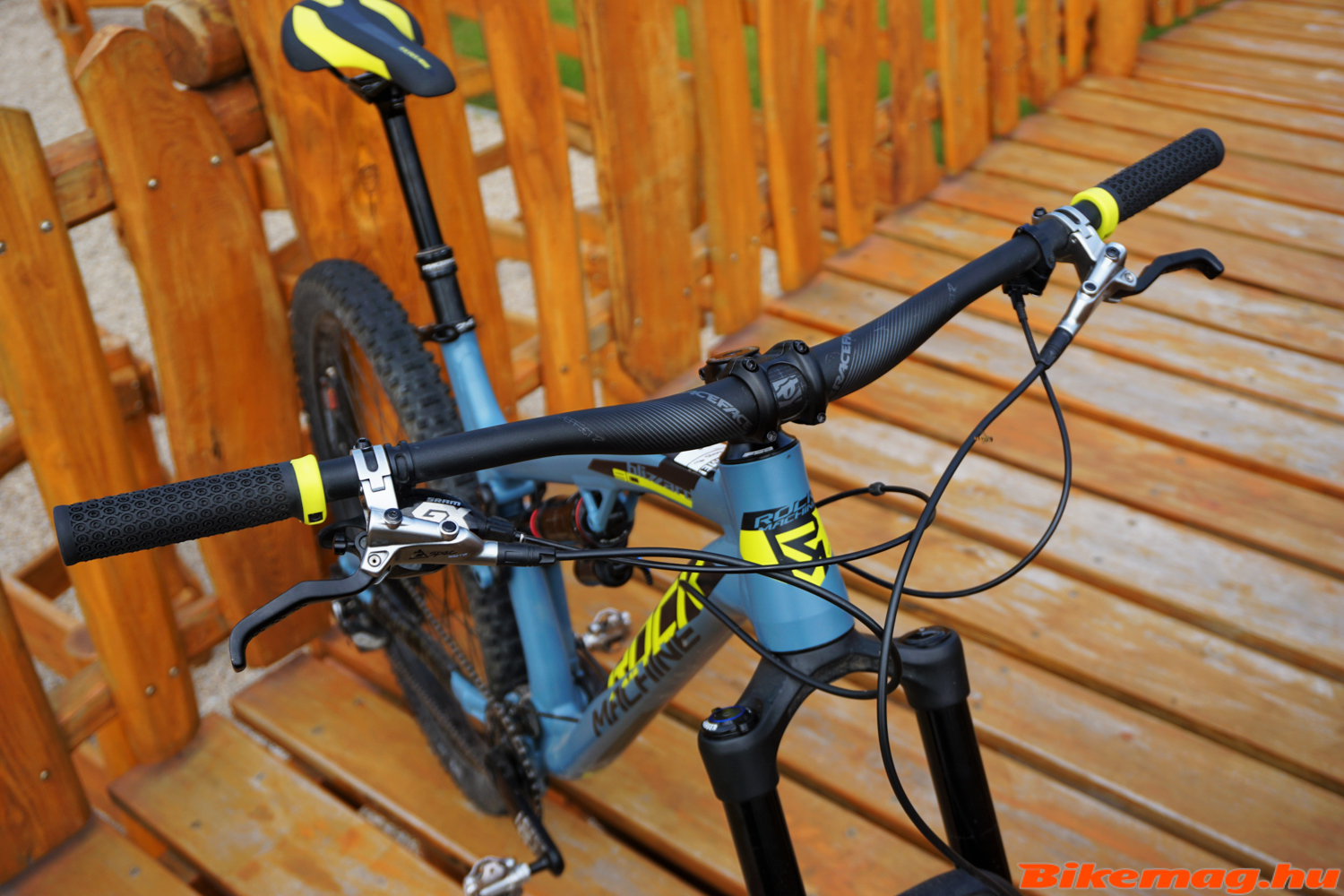 After all this technical information, it’s time to look at what is the Blizzard 90-27 like on the trails. The design and appearance is always a subjective, but no one I spoke to has yet to say that this bike is ugly. The appearance is certainly unique, I personally love the striking color scheme, which demonstrates the bikes awesome power.

After having spent enough time inspecting the bike, Rock Machine engineers set the pressure of the front and rear suspension elements, so I’ve finally had the chance to test ride the bike. It did not take long for us to shake down, I felt at home in the Blizzard’s saddle right from the very first moment. This was certainly a promising sign, since it’s generally hard for me to get accustomed to the frame geometry and handling of endure bikes. I quickly realized that the Blizzard 90-27 enjoys tough, challenging terrain, which is not at all surprising, since it was designed primarily for enduro riding. It commands steep descends, downhill slopes with plenty of obstacles, on these, it demonstrates all its prowess. The Blizzard 90-27 will tackle everything thrown in front of it, gets rid of obstacles, essentially making the rider feel like he is on a flying carpet. This is partly due to the fact that the rear suspension is very sensitive, it starts easily and moves sensibly through its not inconsiderable stroke. The front fork and the frame are well-matched, they can easily be set up to work in perfect harmony. The frame has more or less the same linear motion as the Lyrik fork, they are a match made in heaven! I have no reason to complain about the steering either: the Blizzard has a well thought-out geometry, it is easy to turn in tight corners. Fortunately I did not experience my usual caveat concerning long travel full-suspension bikes: the rear’s reluctance to carry out the turn due to frame flexibility. Before the test ride, I was very curious about the TRP brakes, so I intentionally tried to find its boundaries during the ride. I did not succeed, since they did their job without any problems on trails at the bike park. I even made a hair-raising descend on an extremely steep, world-class downhill course, and I still could not make the brakes fade or heat up excessively. Intended to be a top-end Enduro MTB, the Blizzard 90-27 was designed to cope with not only steep and long descents, but also rolling efficiently on flat land and tackling uphill sections on the trails. Climbing is aided by a 3-position compression dampening on the rear shock, but its Floating Pivot Suspension with a floating shock position also makes seated climbing as efficient as possible. It’s made specifically for the bike’s long rear travel, so even in open position it does not induce too much movement at the back. Once the compression dampening is increased, all suspension bob can be avoided when standing out of the saddle. Naturally the Blizzard 90-27 does not climb like a XC bike (it was not designed for fast pace uphills), but it allows the rider to get to the top of all but the steepest, longest and technically challenging climbs. The 500% range offered by the SRAM 1×12 transmission system also plays a major role in the Blizzard’s climbing prowess. The low end of the gear range may even be too much of a good thing, since the 50T sprocket is only needed when the rider is about to fall on his back. 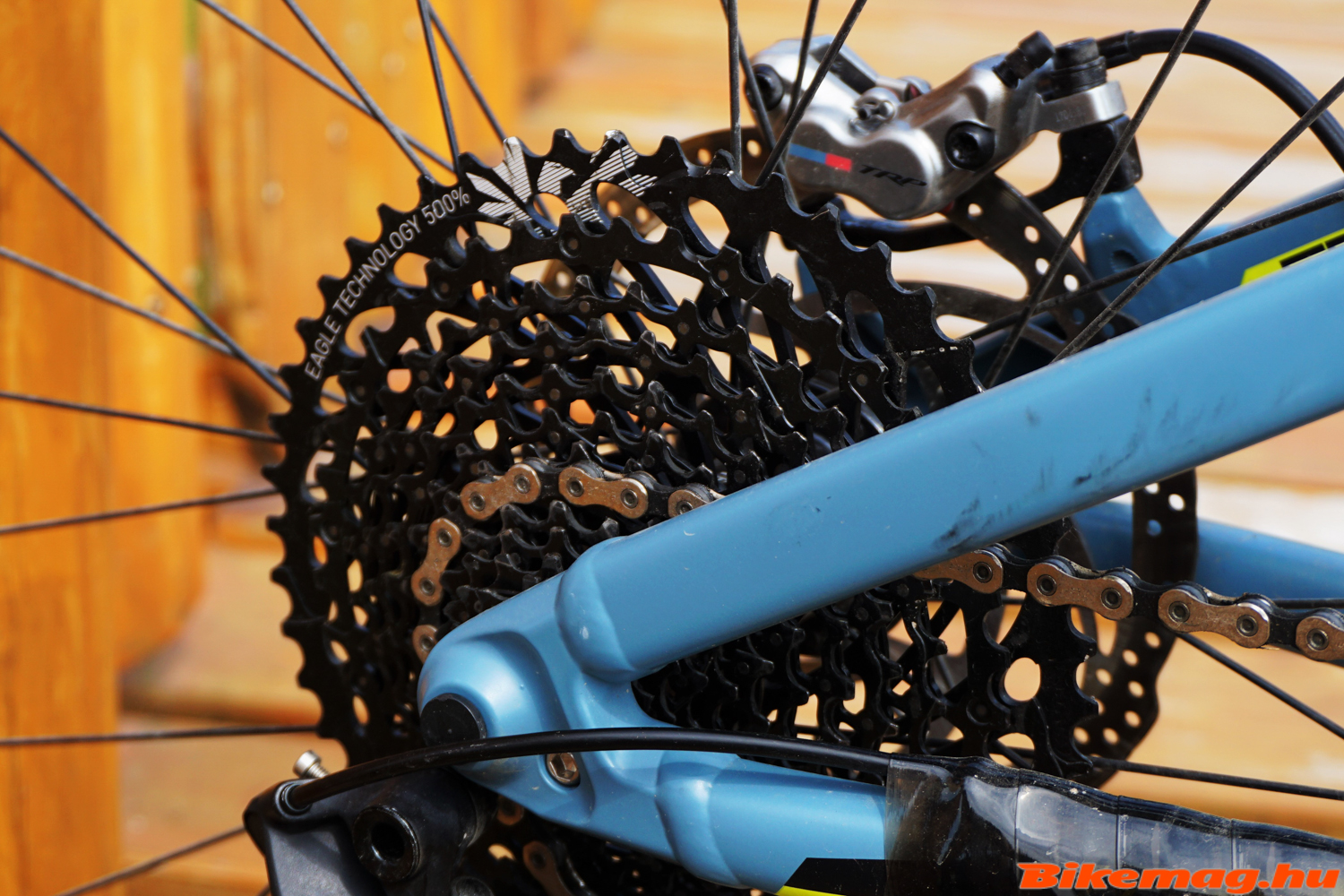 If I was forced to put the Rock Machine Blizzard 90-27 in a “shoebox” category, I would chose enduro, just as the manufacturer had done. But this bike has more cards to play. It could just as well serve as a competitive downhill bike, at least here in Eastern Europe. I presume the new 2019 model version with the rear coil shock will be apt handling any DH course, and the rider would not be stranded at the bottom in case the lift broke down! So if you’re looking a bike which can perform both as an enduro machine and DH rig, the Rock Machine Blizzard certainly fits the bill.