If you about to test a renowned standout product in its category, your anticipation is over the roof. It goes without saying what kind of expectations I had on Feedback Sports Pro Elite Work Stand. I read all the reviews and user feedback, and on paper this work stand was exactly what our tech support crew needed at the races. It arrived just in time for the cyclocross race season, where the stand could prove its resilience and functionality the constant traveling and harsh race conditions entail.

By its portability, stability and durability it’s been tailored made for such environment. Before its duty, I checked its “credentials”. It’s made of red anodized aluminum with a clamp height of 1067mm – 1800mm. We could fit in up to 66 mm thick tubes, which is normally an overkill. It took a reasonable space in the car, since its folded size took a meager 140 x 203 x 1168mm. standing it the pit took 1450mm.

And its total weight of 5.9 kg was loadable up to 38.6 kg. Unless you put a heavy-weight DH rig on it, you will never cross this weight threshold. Just in case, a damage occurs, a 3-year ‘piece-of-mind’ warranty will cover you greatly. At times, mostly in hurry, between rounds, our mechanic clamped the bike frame on different spots, not only on the seat post. The procedure was always a quick affair by way of “Secure-Lock” which is ratchet-action closing and push-button release. 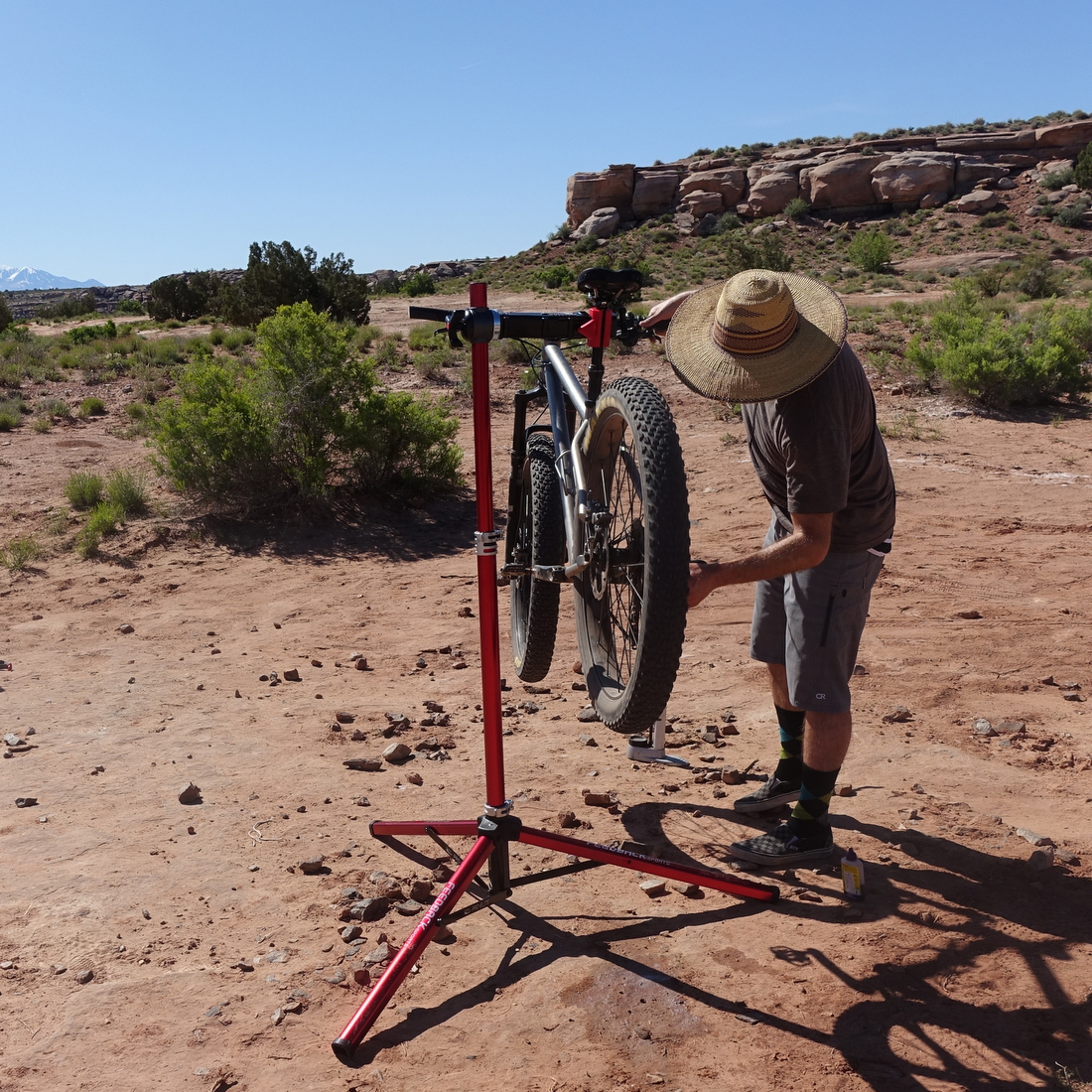 Given an uneven, grassy and muddy ground in the pit-stop area we were grateful for its stability trough a tripod design. It battered the elements bravely: we had plenty of sub-zero temperatures to deal with, sometimes it was set up in pouring rain and snow, but no sign of rust and harm was seen.

I know that Feedback Sports are dedicated to keeping and producing on their status they achieved with the product, and to cut it short, we briefly realized through firsthand experience that Feedback Sports has one of the best repair and storage product in the industry.

Cleaning the stand was a brief procedure, the anodized red alloy doesn’t take harm. Only minor scrapes had been obvious after so much [mis-] use. You can get your bike at almost any angle or position. The quick release is just the hit of a switch, which comes in handy once your hands are busy.

A much easier task had the stand in Spain while our trainings camp, mostly sunshine and mild temperatures. There was its portability and handiness on demand. By its weight the transferability was reasonable. Be it in the parking lot, workshop, hotel room, as a makeshift service course, it’s been a breezy operation. 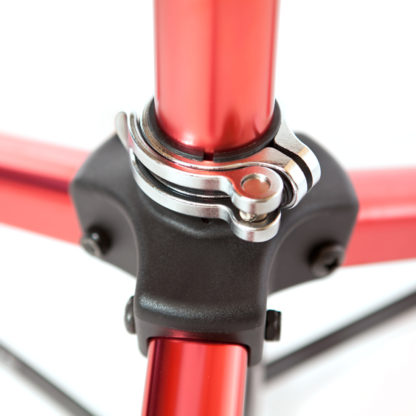 Considering the initial investment, one will have to ponder in regard to where or not the return of investment is quick enough or if it is given at all. There is no denying the purchase price is on a higher scale compared to its competitors. So my advice would be to weigh up the long term usage as well as how frequently are you using it.

I have got to bear in mind, too under which conditions it is supposed to be used. Another trump cards of the Feedback Sports Pro Elite Work Stand its immense versatility. By the look and usage of, there are barely any limitations. One can literally apply for BMX up to a sizable tandems that really demands the most sturdy and handy stands. 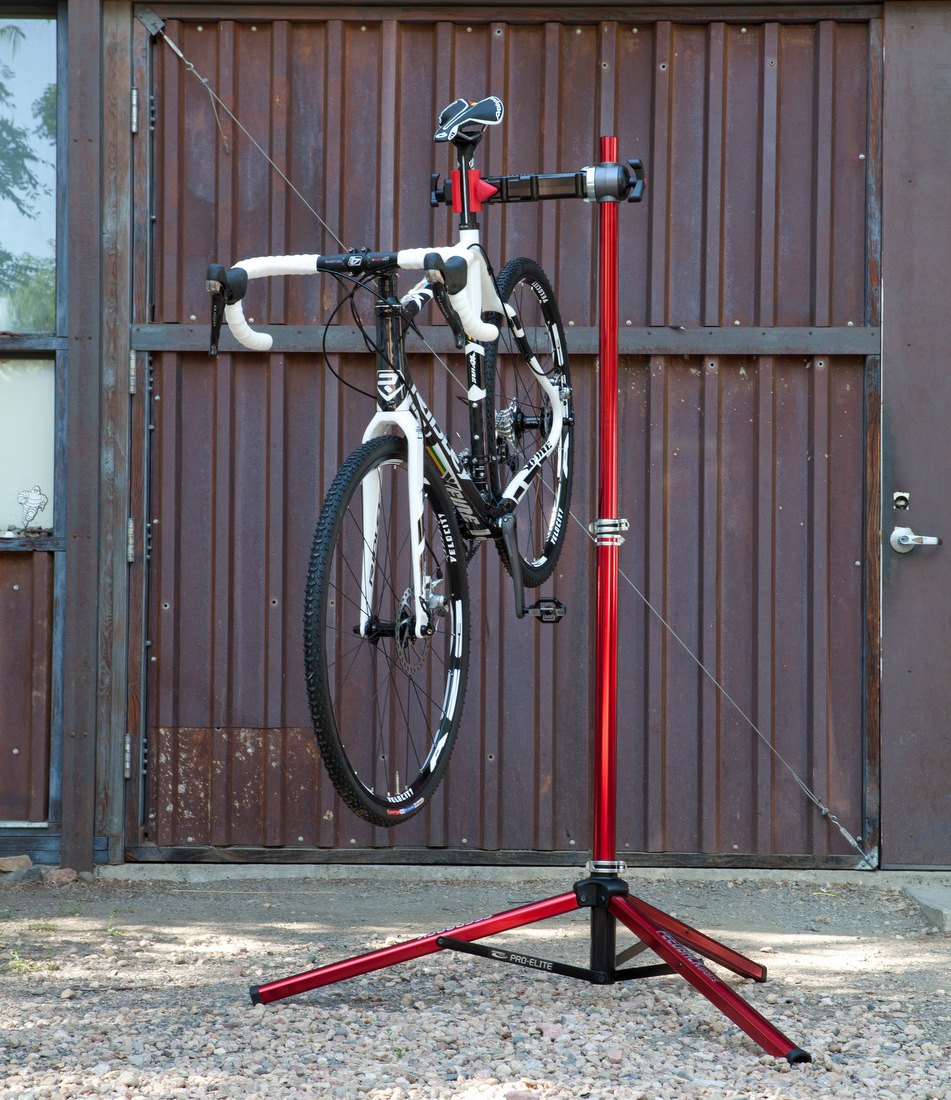 So if you take all this aspects [and much more] into account, this stand ought to be short listed. As always, the initial purchase price fades away in no time once you work on it regularly. Sure, Feedback Sports has similar stands in its portfolio, in case the demands rent that high. Their quality and execution is on the very same level, only the features aren’t as numerous. I had to pleasure to work on it on plentiful occasions. At time I don’t feel like tinkering on bikes, so this stand has been the only motivator to get repaired or set up the bike.

It will be interesting to see the long term durability. Talking with people who have been using the stand for ages, their statements are almost 100% unison: “It will outlast you, your bike, and all your gizmos in your workshop”. 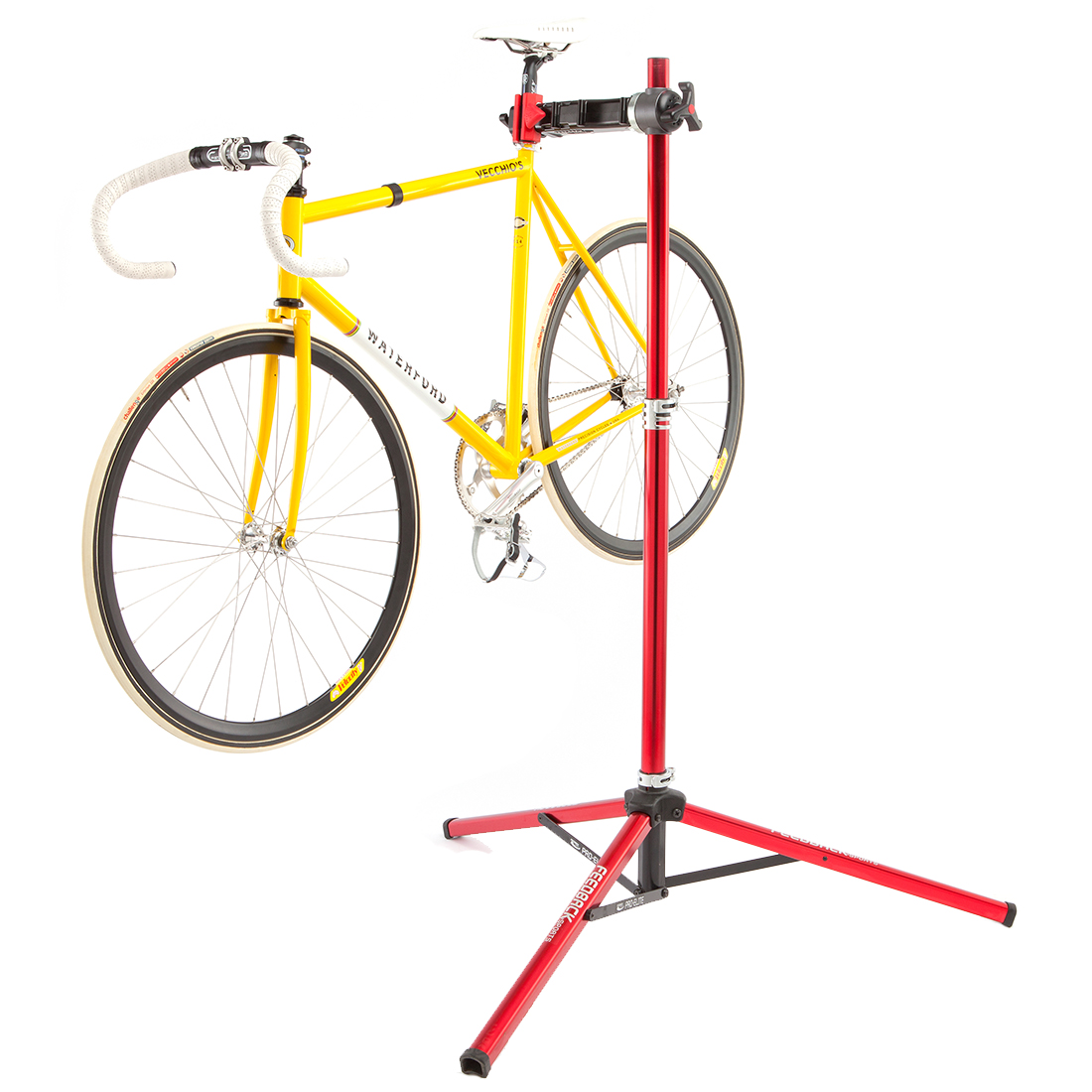 Our mechanic, team riders, I and all those how have worked with this stand are having a hard time to find some chink in its armor. The above mentioned purchase price is the mere gripe comes to mind, but again, bear in mind the traits the Feedback Sports Pro Elite Work Stand brings to the table outweighs all financial pondering.

Kudos to Feedback Sports for this masterpiece of engineering, which even though provides a ton features, simultaneously keeps the handling minimalistic and simple. It is hard to envisage our workshop landscape without this stand from now on.

To lock the clamp, just push closed, and tighten. To release, push the release button and the clamp opens fully. Simple, fast, secure and safe.

The Feedback Sports Pro-Elite Repair Stand was designed to be a professional mechanics stand: used by race mechanics the world over. The Pro-Elite is fully portable and stable on rough ground, but quicker to use than any portable or shop stand.