MET’s relentless effort to produce sophisticated helmets for 30 years is well-manifested every time they launch a new product. The Italian producers tries to live up to its reputation being an innovator in helmet segment, thus its team pays attention not only to develop its technical features but also to outpace their competitors by refined design and appearance. Certainly, protection and comfort are up there in the requirement specifications as well. 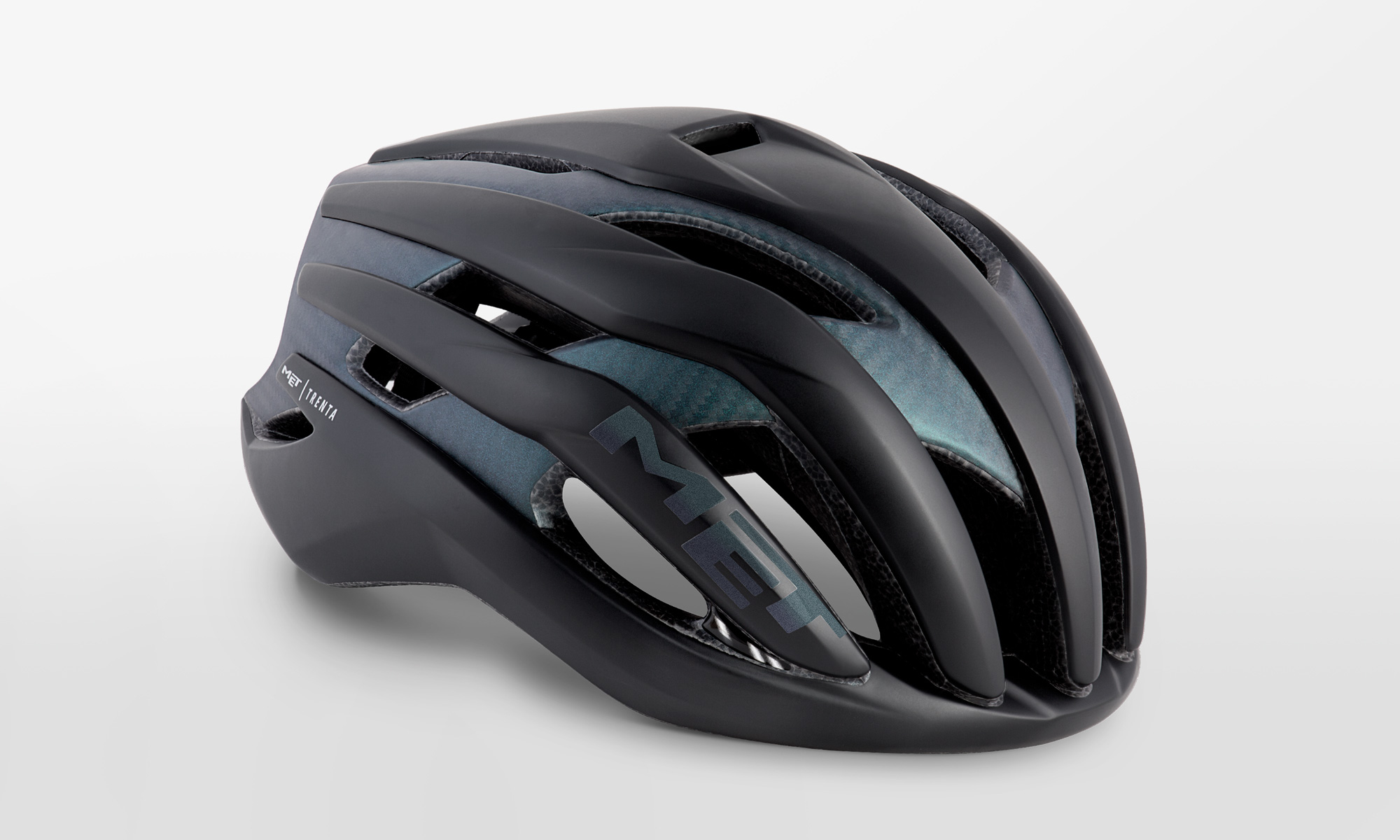 The MET Trenta Carbon Helmet has been made to mark the brand’s 30th anniversary. At the same time MET meant to put on display with Trenta some imbedded features and advanced technologies. MET’s ambitious goal to set new standards in quality and design begs the question; what are those features that makes the MET Trenta Carbon an outstanding helmet? It is obvious for an Italian helmet maker that the design “per se” is crucial. Nowadays it a challenge to combine pragmatic technical advantages like, lightness, comfort and aerodynamic with an appealing appearance. And it remains subjective, hence it’s pointless to judge it by its look. 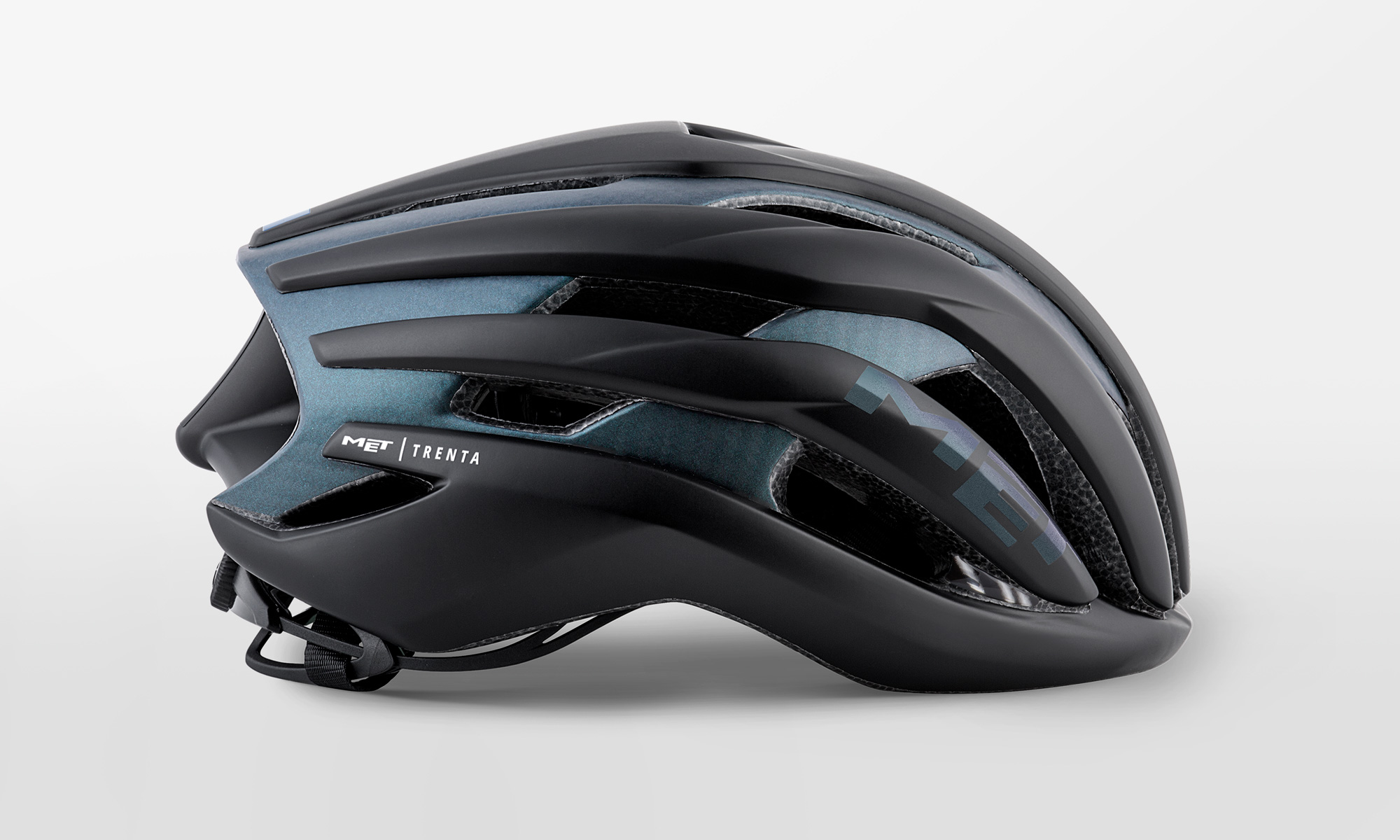 Counting myself a climber, I tend to prefer rather light weight, reasonably ventilated helmets. As a result, aerodynamic aspects are a welcome side effect but not the highest priority. MET Trenta Carbon by its feather-weight of 202 grams, size S managed to surprise me greatly. I was incredulous at first because its construction and shape indicated something else. But it doesn’t stop there. When I was trying to find some short-cuts in order to for MET to lower the weight, my try ended unsuccessfully. Quite the opposite! 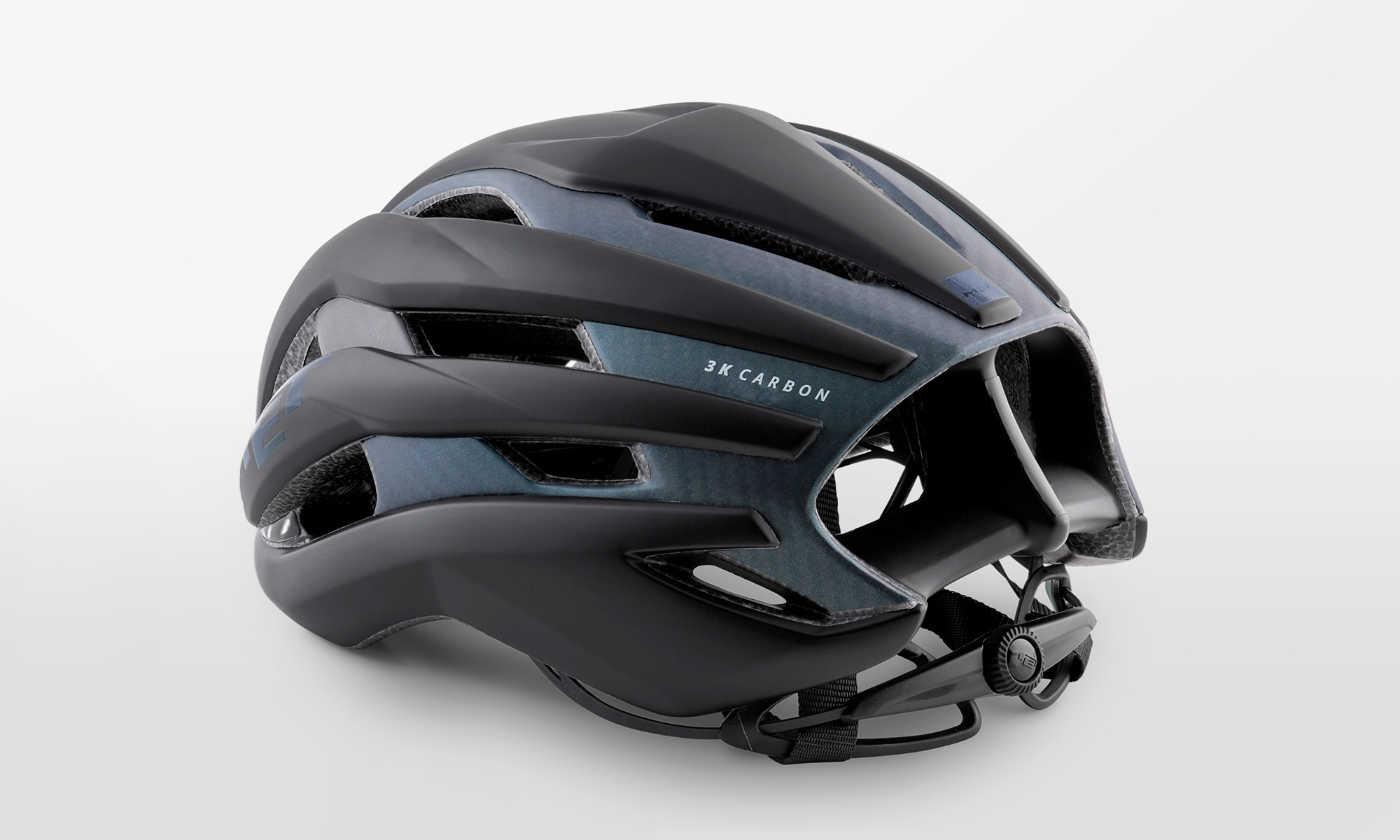 All usual and added ‘ingredients’ that make up a good helmet are there. A cushy Air Mesh comfort padding which is hand washable is integrated just like the Air lite straps and adjustable divider that are easily adjustable. It doesn’t even need to be fastened it too much to get it snug a secure. It ‘hugs’ your head firmly without any feel of constriction. MET calls it Safe-T Orbital fit system. As for the security standards, I expect every helmet maker to be certification CE AS/NZ, US compliant, let alone those manufacturers whit high reputation. So that’s the case here too. 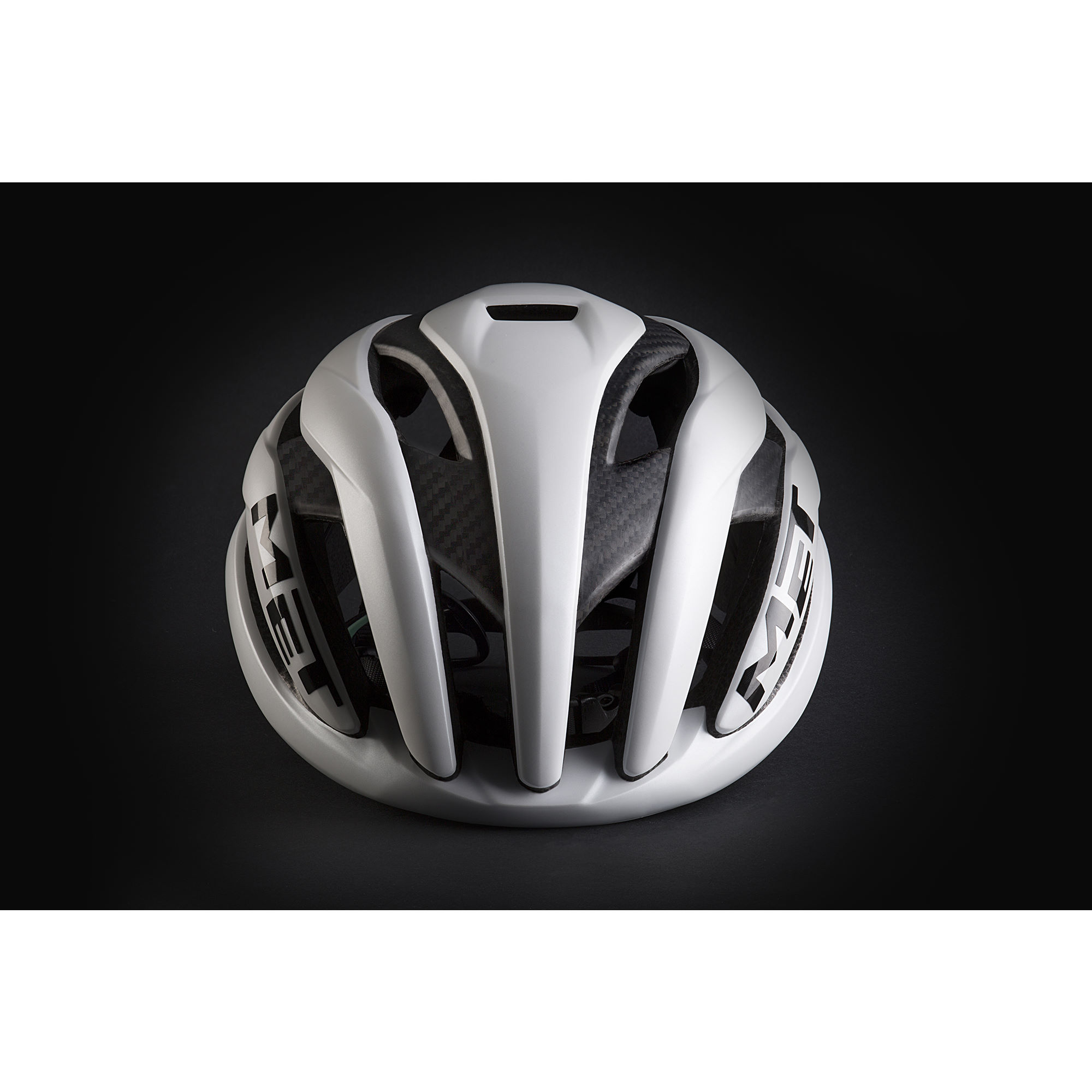 MET applies an In-mould polycarbonate shell with EPS liner in conjunction with carbon cage which is embedded into liner as inner structure. To up the ante, the MET Trenta Carbon is delivered with reflective rear stickers and as an option a well-appreciated MET USB LED light. If you wish to swap your worn front pads for new one, a DualGel front pad is to be had separately as well. 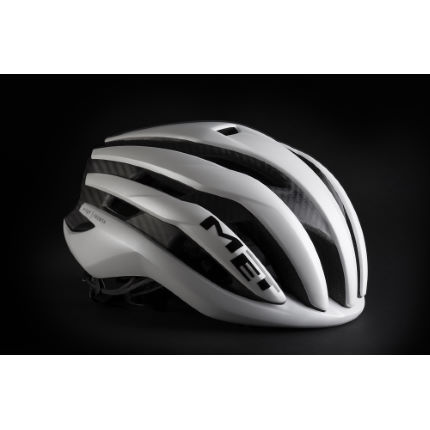 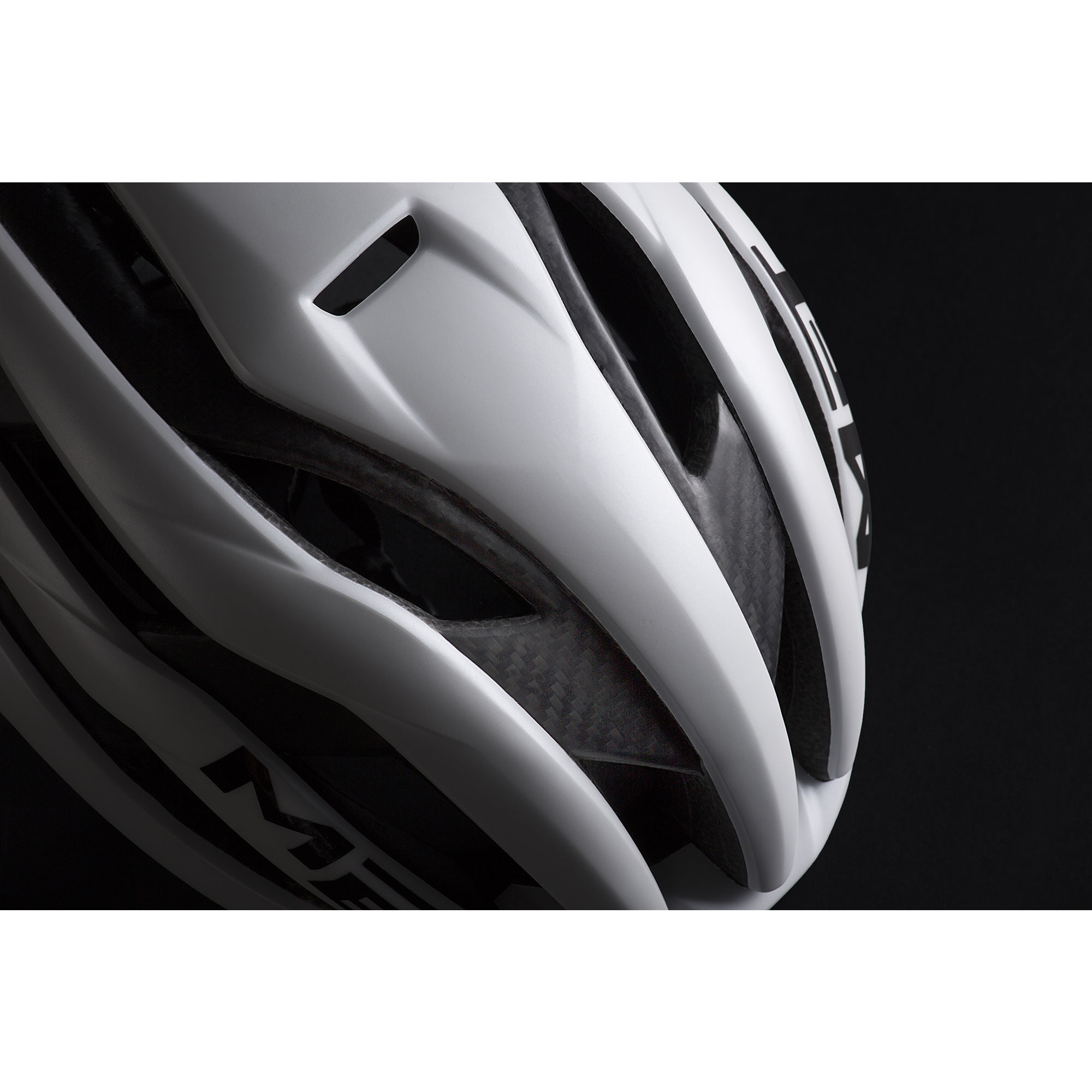 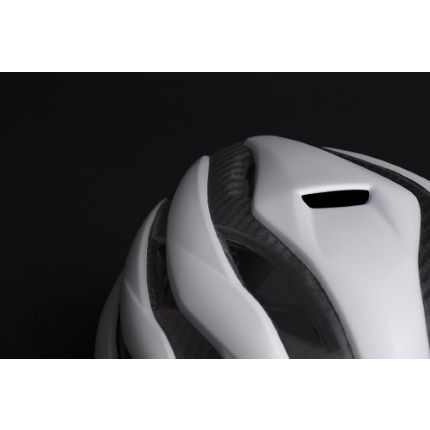 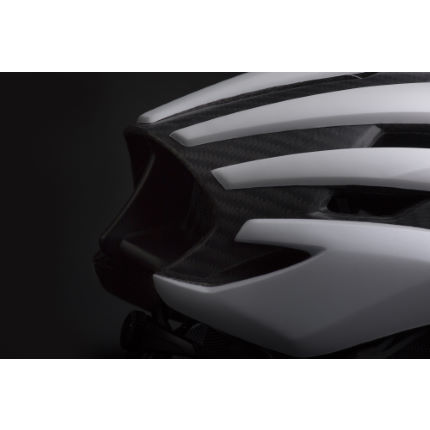 The above mentioned lightness is just one of those attributes that started my affection for MET Trenta Carbon. Its minimalistic non-bulbous design is a very pleasing one in my books. No flashy wings and ridicules curves just for the sake of being different. Yes, MET built in a tube-shaped tail and internal channeling that promises to create up to 7% less drag compared to a more conservatively shaped road helmet. But it did a way that doesn’t compromise its general look. To meet other aerodynamic attributes, the Trenta has designed its front in a rather open way, compared to some aerodynamic designs on the market. But that’s fine with me as it features a measured blend of air cooling effect, and air-efficient features.

Overheating was rarely an issue. That’s probably because I used this road helmet at MTB races too, where very slow uphill speed is more the case than on the road. Add to that high air temperatures beyond 35 centigrade with almost zero wind speed and you wish you could stay away from a helmet for a while. A totally different scenario on the road though. Even on steep uphill where speed is laughably low, the ventilation with 19 vents was more than enough – let alone at higher speeds, despite at times very high Southern-Europe temperatures.

MET’s own Safe-T Orbital adjustable fit system contributed to the comfort factor even more. It allows an on-the-fly two-step, and so called occipital, four-step vertical adjustment. I wasn’t fussing around with it too much. I pre-adjusted it once prior to the ride, and if there was a need to fine tune it during the ride even more, there was still an additional micrometrical dial for fine adjustment. 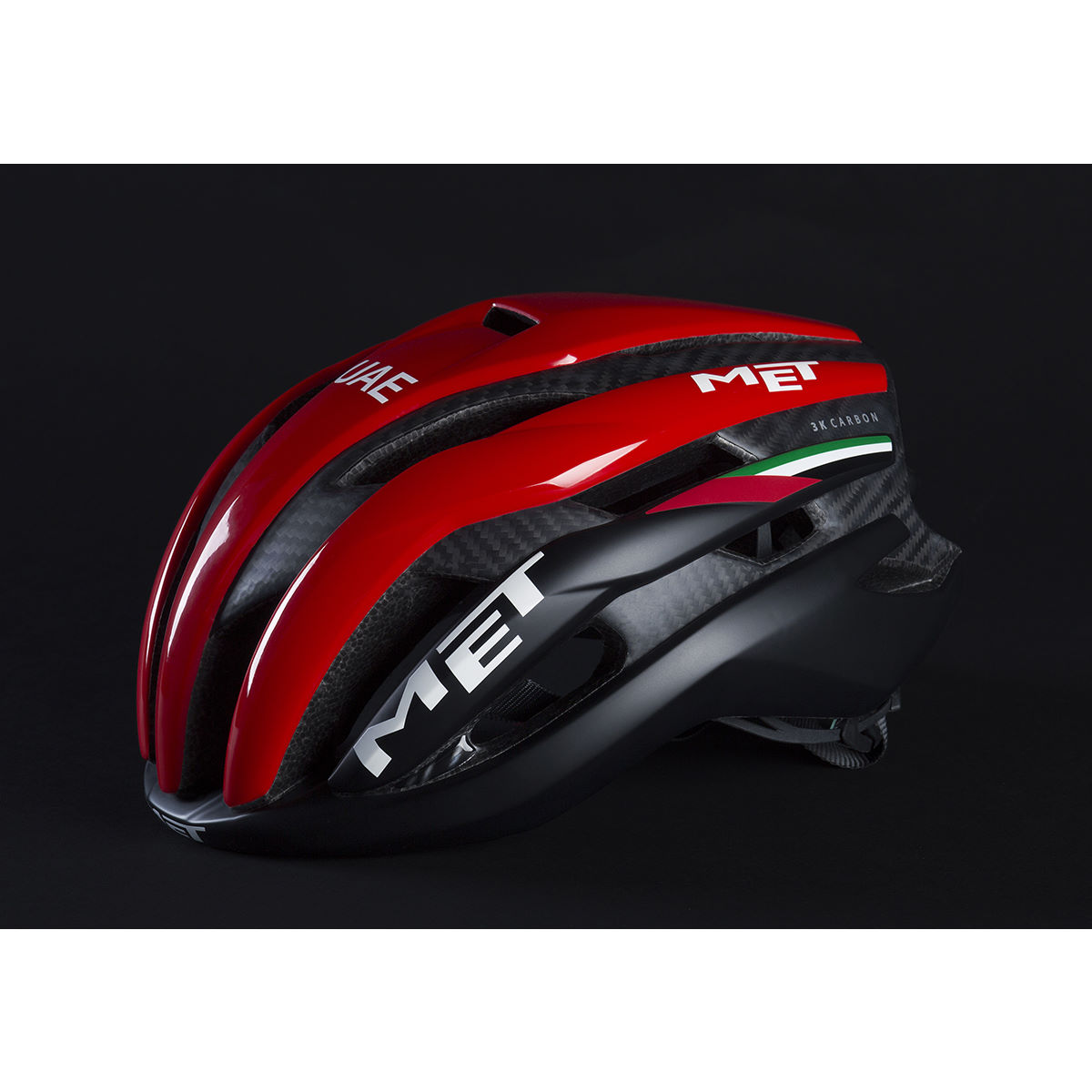 MET’s flashiness is further heightened with its 3K carbon composition. MET’s goal was to reduce the EPS foam liner by 20%. That would suggest that the safety would been reduced as a consequence. Meaning a compromised impact energy absorption. I ought to believe MET’s statement that no compromise had been made. Verifying this, MET embedded an in-mould polycarbonate shell in order increased strength and durability. Again, it is a matter of trust and achieved test results this helmet was subjected to. 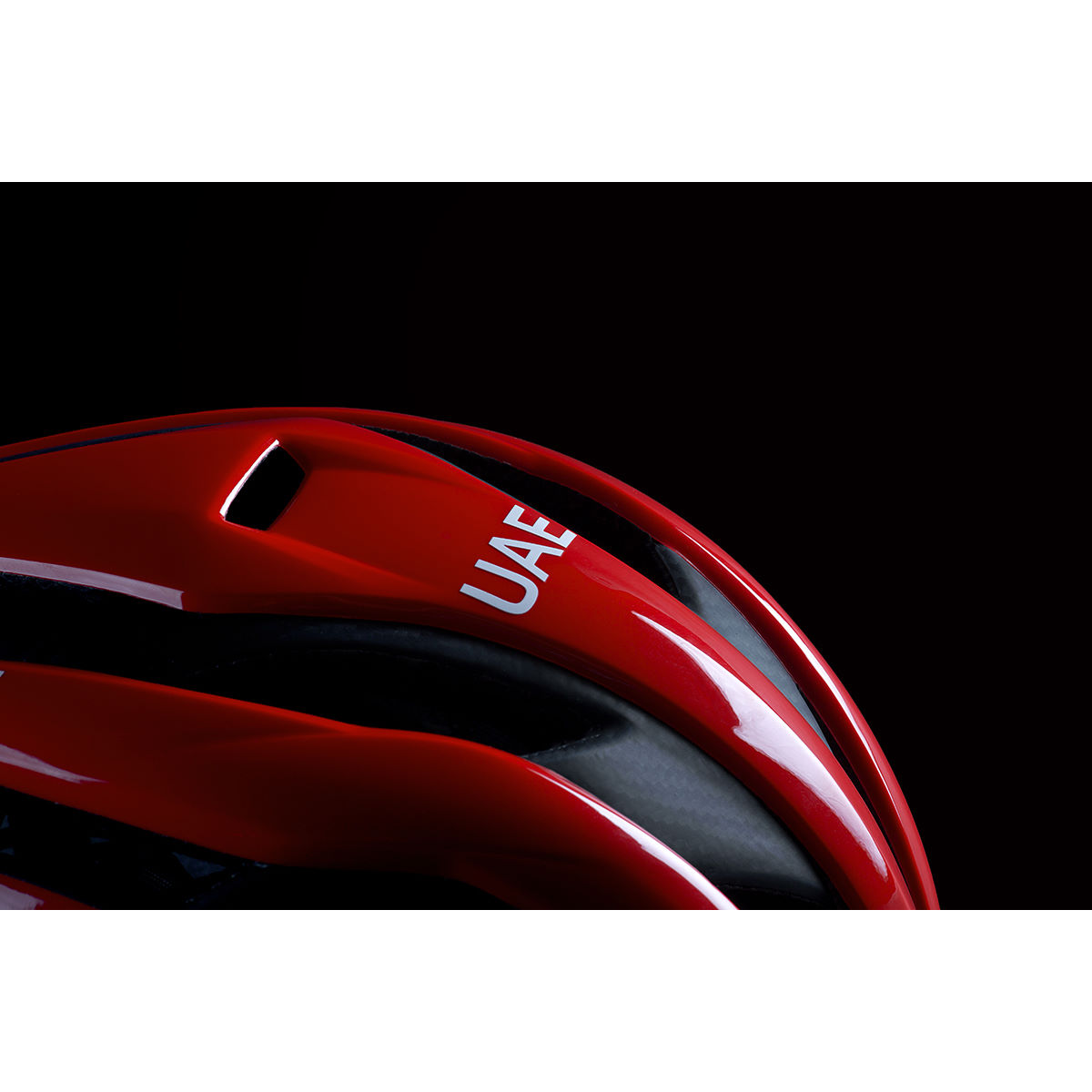 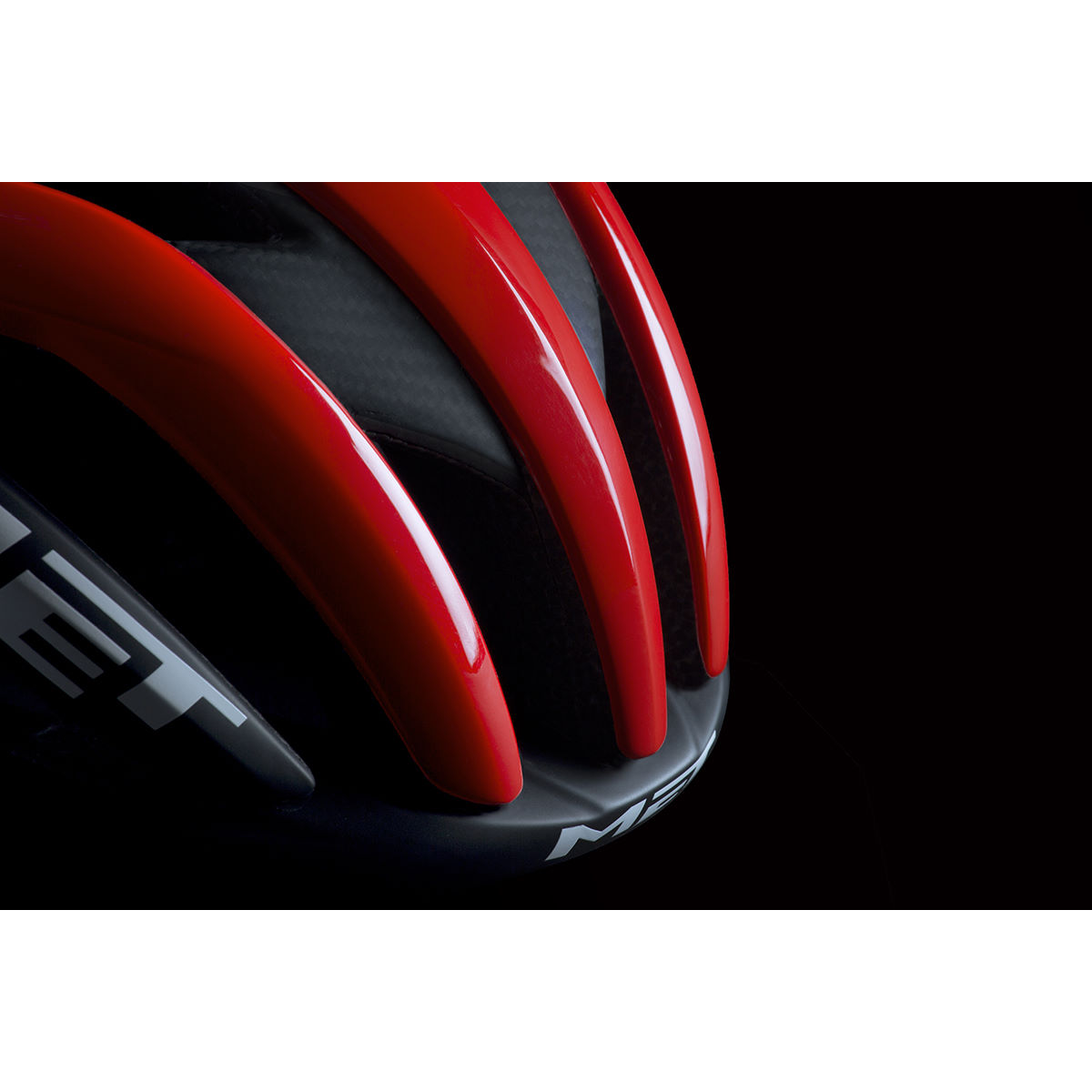 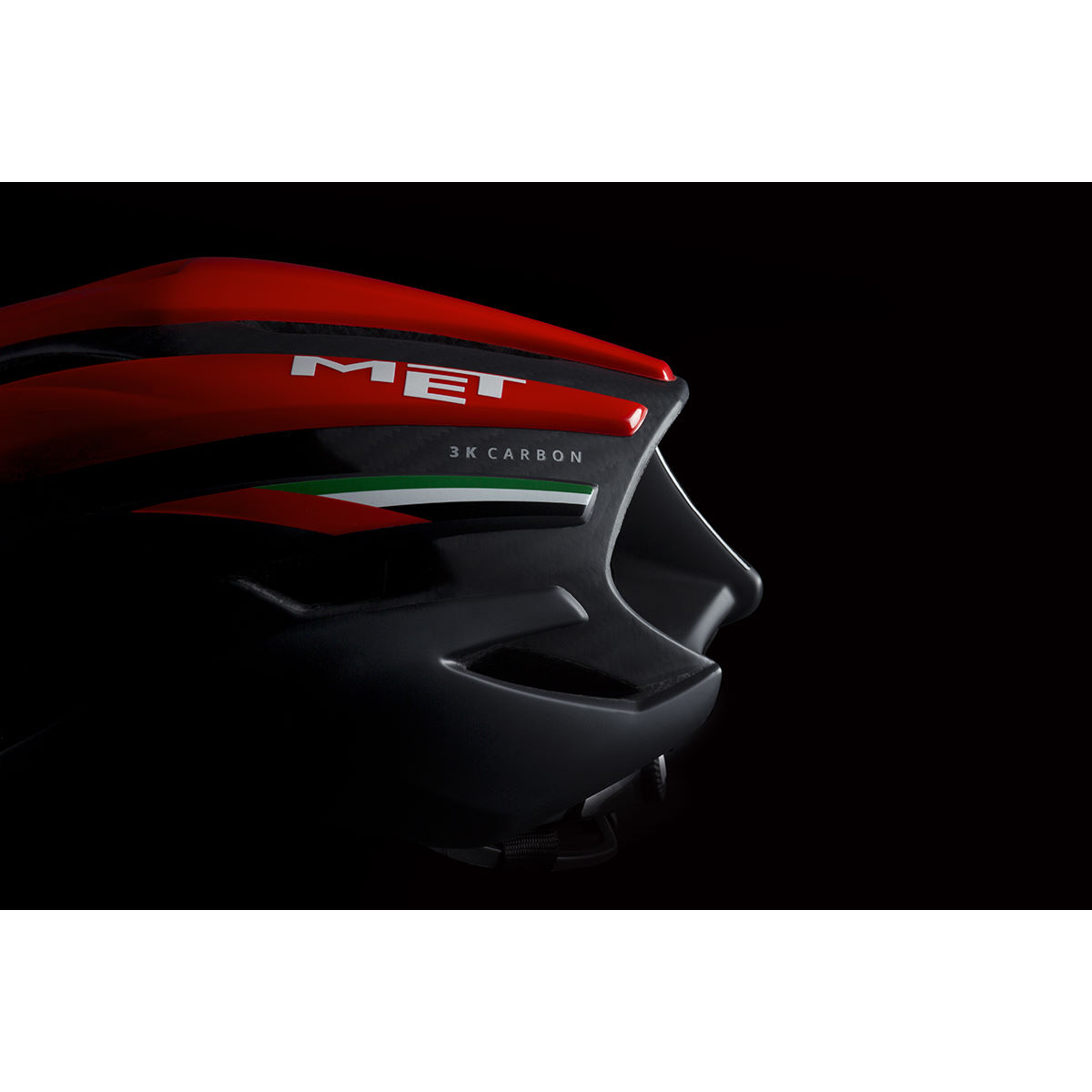 In the past I tested similarly equipped and sophisticated helmets, but much to my regret the lion part of them left a lot to be desired. There were a plenty short-cuts to be found in terms of final execution, quality and long term durability. Thus far MET didn’t let me down. I longer term test is needed to see whether the MET helmet has any chink in its armor though. 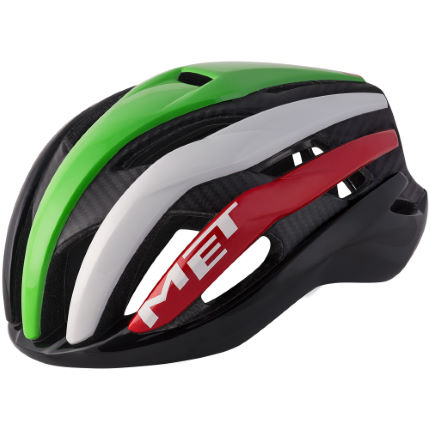 As hinted above, the MET Trenta Carbon Helmet is engineered for road usage in the first place. As often the case, mind you I tested it in dirt too, to showcase its multipurpose capabilities. What’s more, I come to love it even more while using it at MTB races, mostly due to its lightness, comfort and fresh appearance. Heat management was only a problem if a mix of high temperatures, wind-still, and slow speed came about. 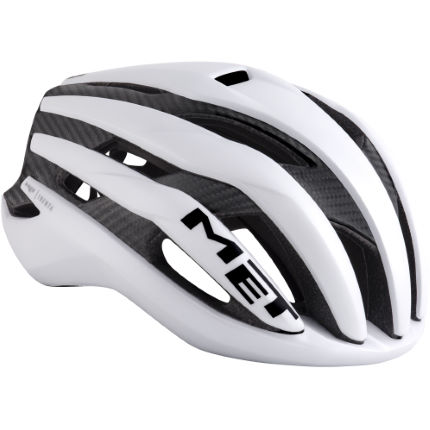 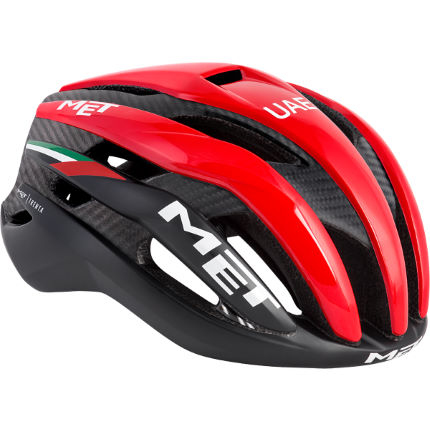 The MET Trenta Carbon Helmet has plenty of characteristics that stands out of the crowd, admittedly though, one aspects that grown on me the most was its compact shape combined with lightness, without giving in regarding to comfort, safety and claimed aerodynamic. Would I recommend the MET Trenta Carbon Helmet? For long term, and frequent usage definitely yes. That way you would quickly forget the initial costs and enjoy the experience without regret.