This spring a new KROSS enduro bike has been launched called the Moon.
The bike was delivered and presented by two-time MTB trials word champion David Cachon. Taking part in the event, we were very impressed by what we saw, and now we finally had the chance to ride and test the 3.0 model, which represents the pinnacle of the extreme segment in the KROSS range. 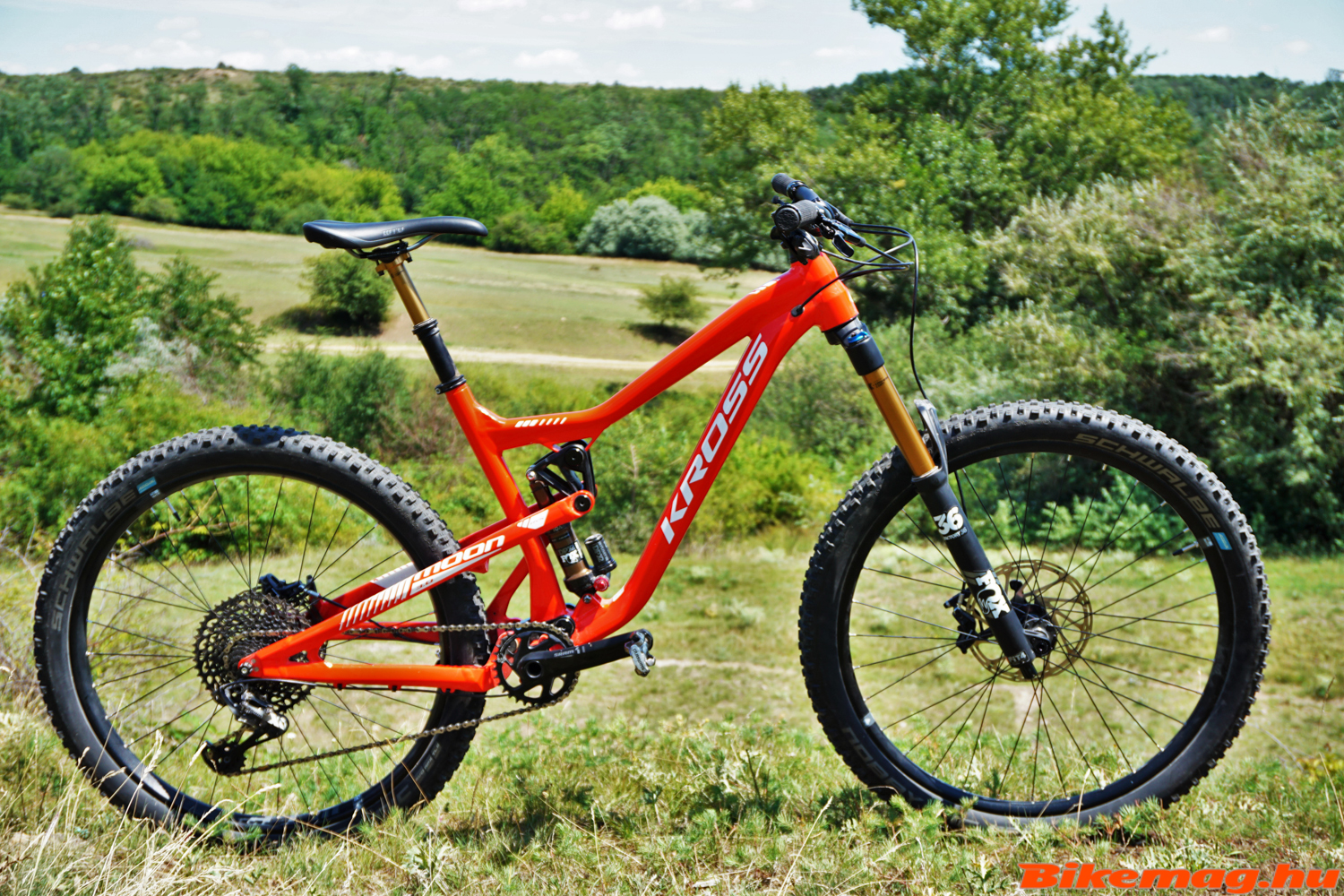 KROSS is not a novice when it comes to the enduro genre. Nevertheless when one hears the brand name, the first thing that comes to mind are the multitude of XCO World Cups victories by Jolanda Neff, ridden in the saddle of a feathery light KROSS XC bike. The more extreme and challenging genre of MTB riding is getting more and more popular worldwide, with Poland contributing some fine riders in the competitive events. So the Polish manufacturer decided to significantly beef up its 2018 enduro lineup, David Cachon joined the KROSS professional cycling team, who is not only a valuable asset as a rider, but contributes to product development and the production of the brand’s videos releases. The Moon is the flagship enduro model, it’s available in 3 versions, namely 1.0, 2.0 and 3.0. The latter is the subject of this review, it has the best equipment, but the platform for all three model variants is essentially the same.

This review is unusual in two respects. On the one hand, the bike and I found each other by pure coincidence, on the other hand, our “relationship” lasted somewhat longer than usual. The story began on a fine day in June when I visited my favorite bike mechanic. Inside the shop I spotted a “fire red” KROSS enduro rig. I immediately realized that this was the new Moon we had recently wrote about in BikeMag. I was curious, so I asked the shop assistant how the bike got there – thinking that there are not many of them rolling around in Europe, not to mention Hungary! Did someone actually buy one of these in the shop? The reply was even more promising: it is a test bike and he will ride it at Lake Garda the following weekend. Once back home, I sent an email to the local distributor, asking if I could test the bike after it returned from the trip to Italy. It’s not every day that I have a chance to ride a bike of this caliber. My request got approved, and the following week I took the new, top-of-the-line Moon out of the store. The first surprise came when I tried to put the bike the car: it was very light for being a bona-fide enduro rig, and it was a challenge to fit inside due to its size. 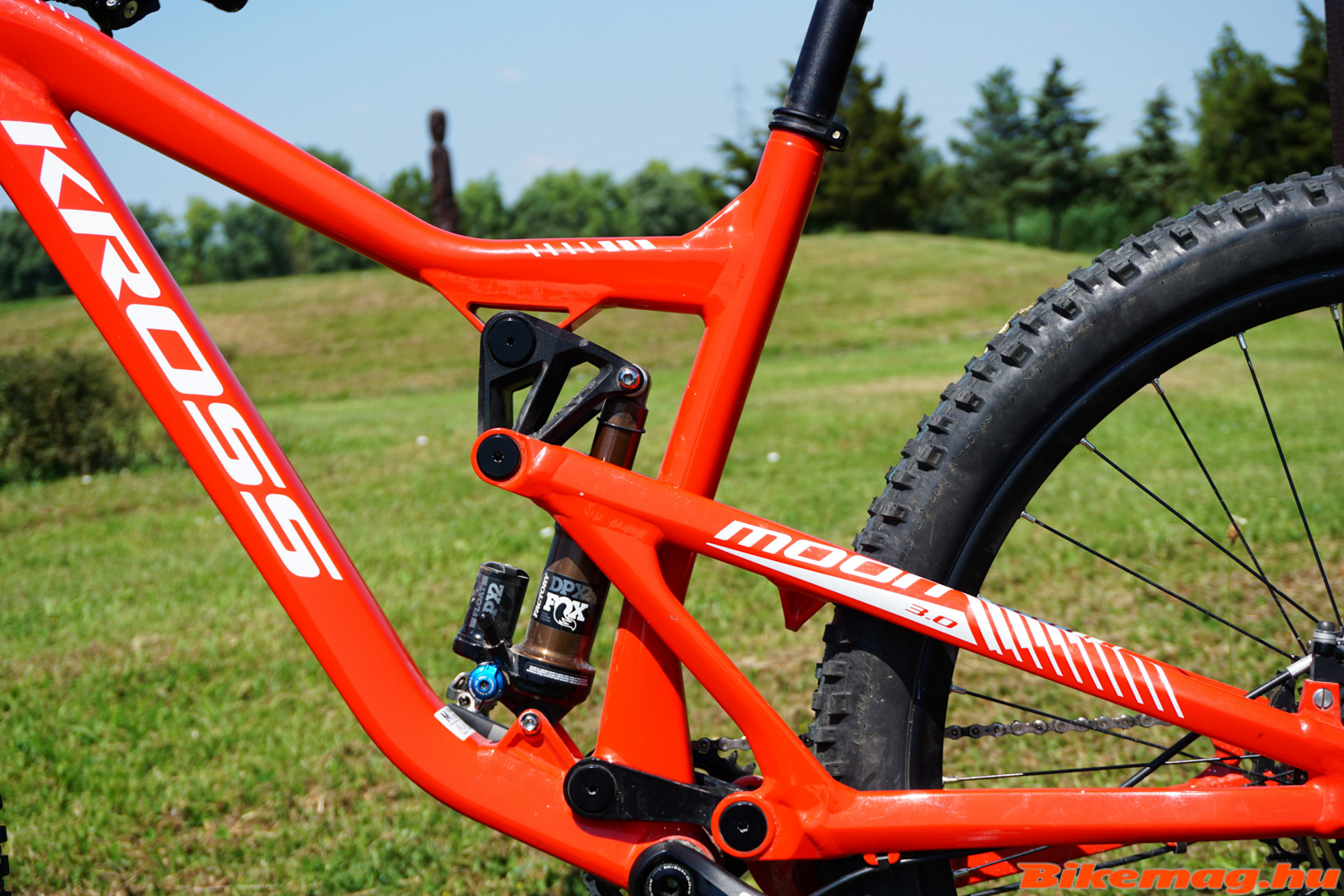 Compared to the previous model, the travel has been increased by 10mm, so it is now both 160mm in front and rear. The frame design follows modern trends with a longer top tube and a shallower head angle, making it much more stable on the fast descents. The KROSS fine-tuned its proprietary virtual link suspension RVS (Revo Virtual Suspension) platform, it has even been made less sensitive to pedaling and braking forces while retaining its plush, virtually endless stroke. For more information about the advanced RVS system, we have a complete article devoted to it here. 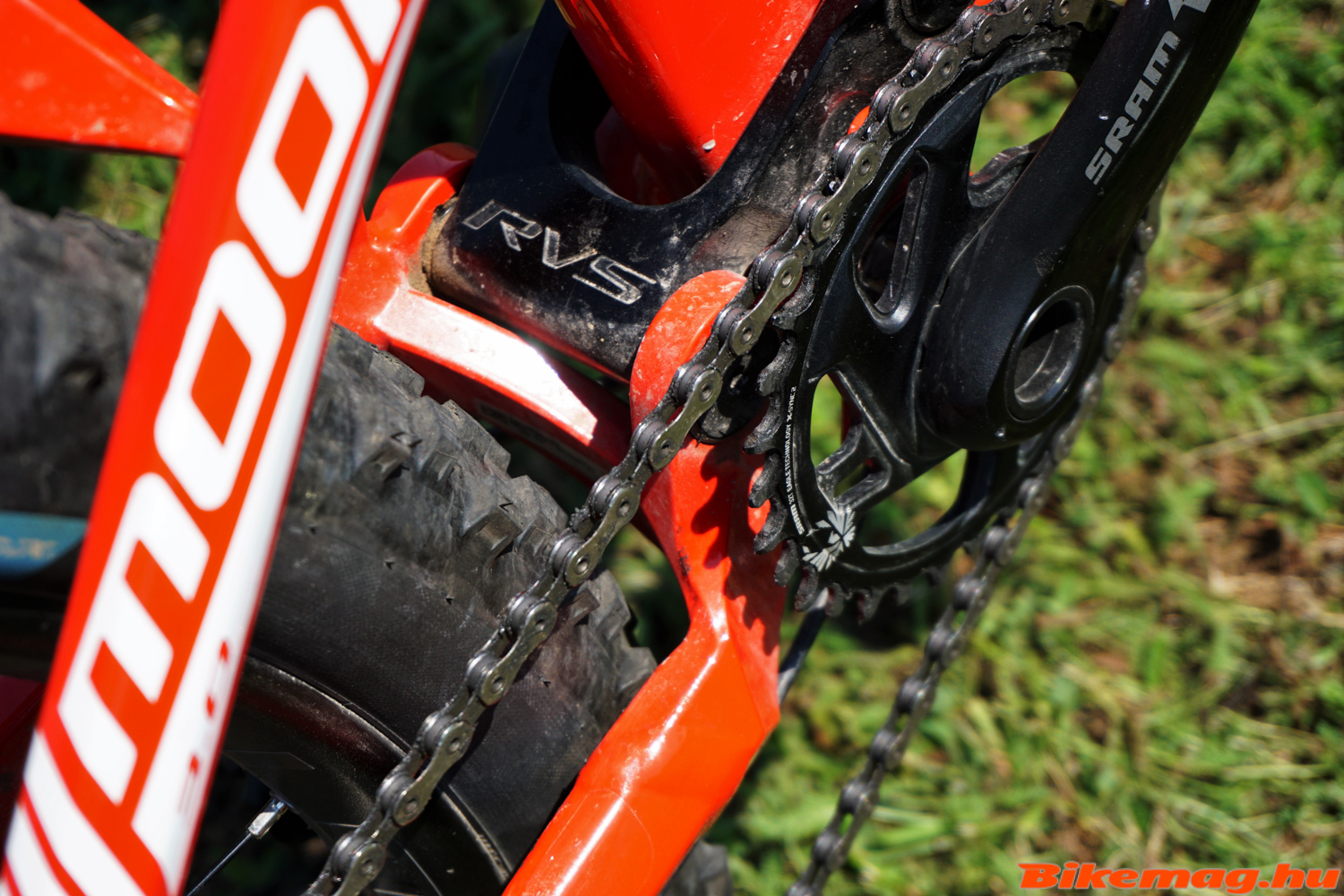 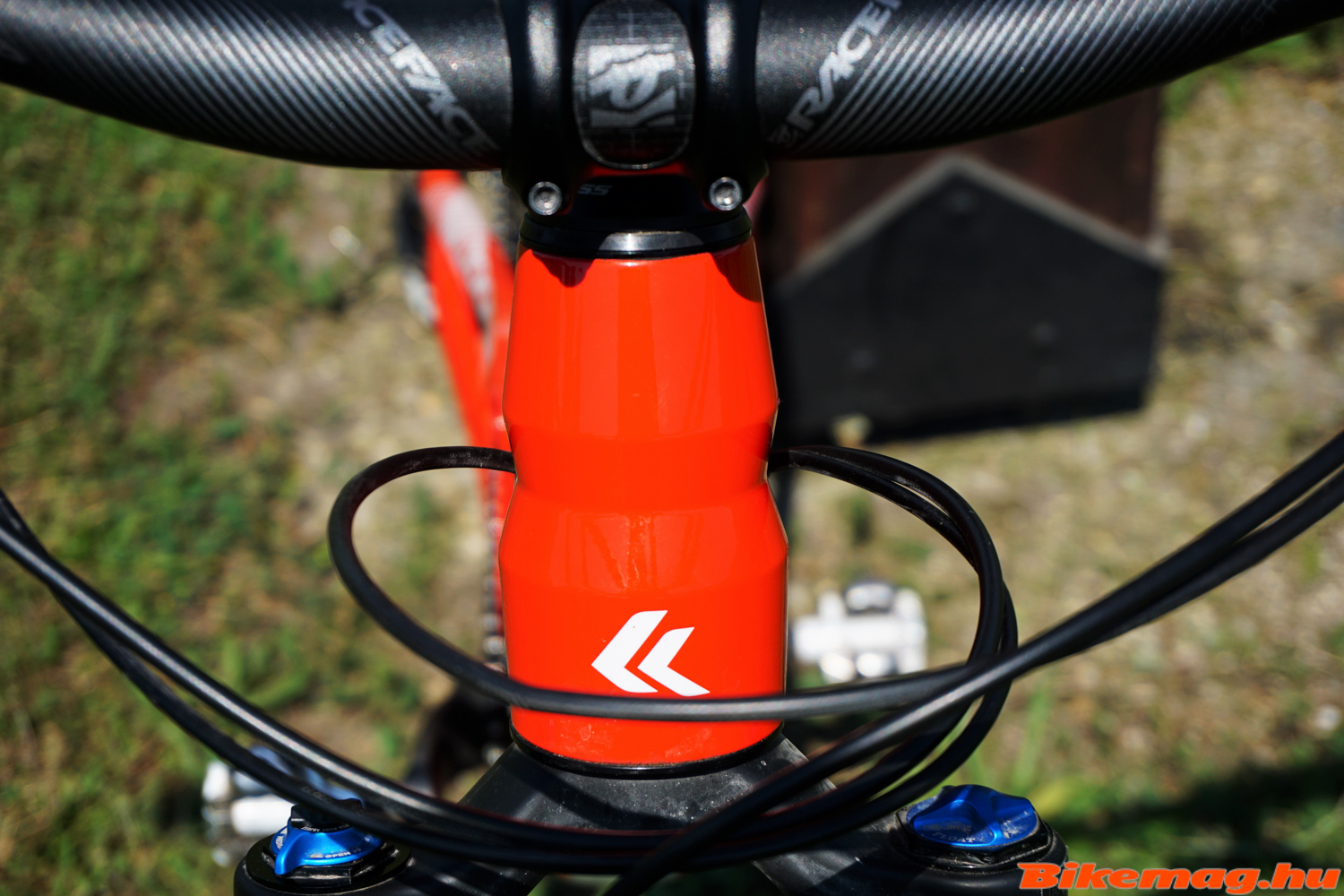 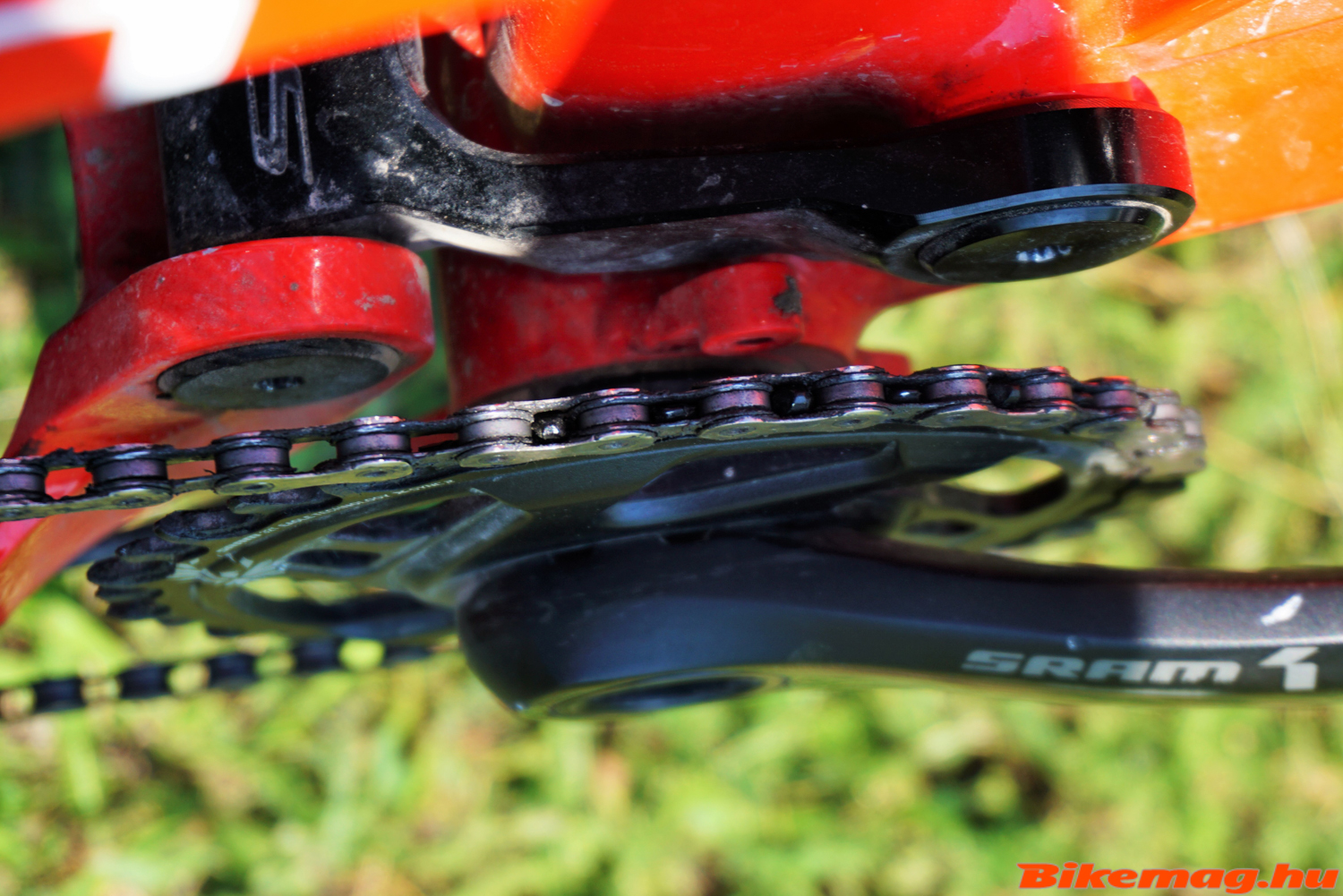 To briefly sum up the essence of its operation, instead of moving the rear wheel along a single arc, the virtual link suspension platform provides a well-tuned span, where pedaling and braking have lesser impact on the suspension system’s movement. This results in a massive improvement in suspension performance compared to conventional single-pivot platforms. 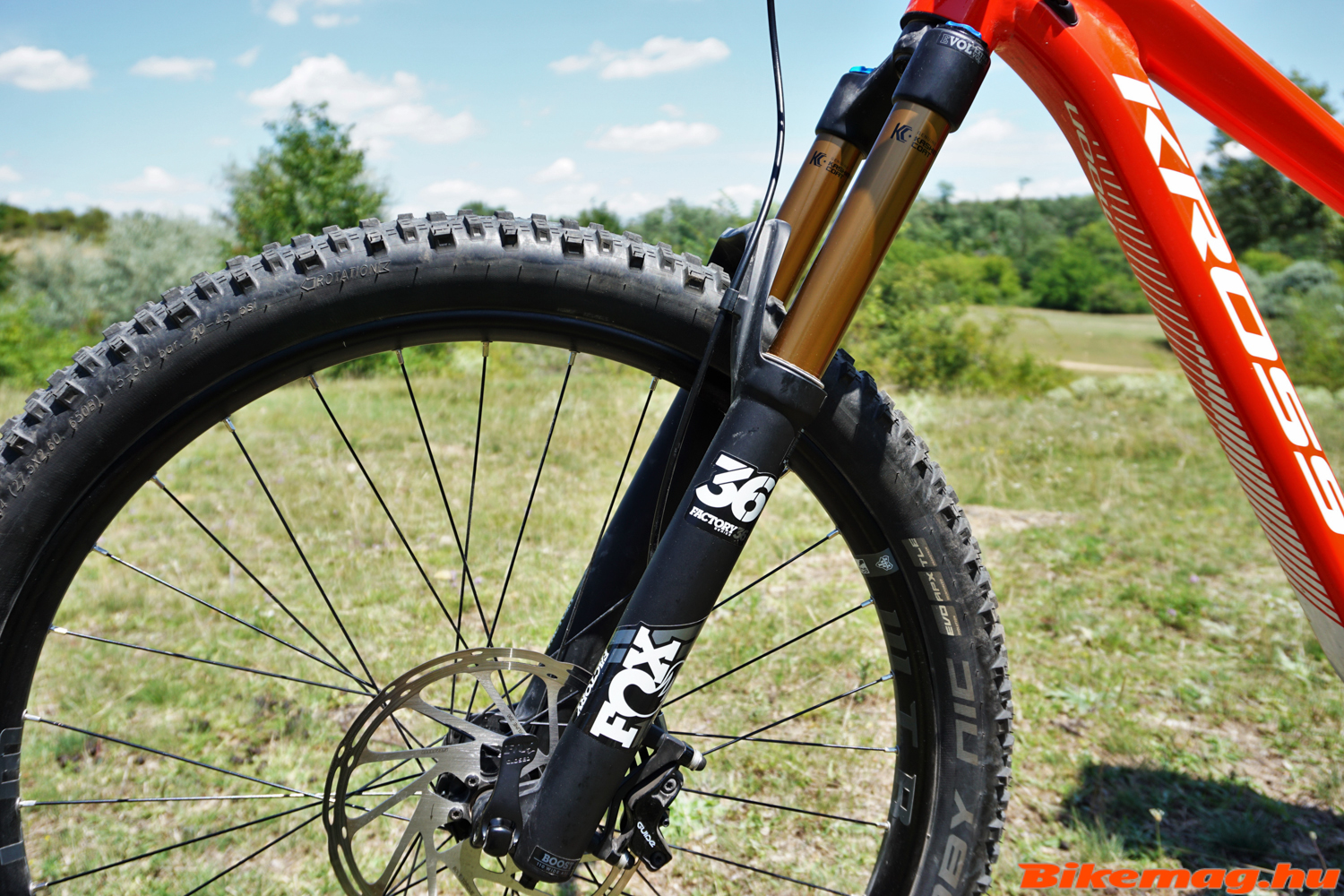 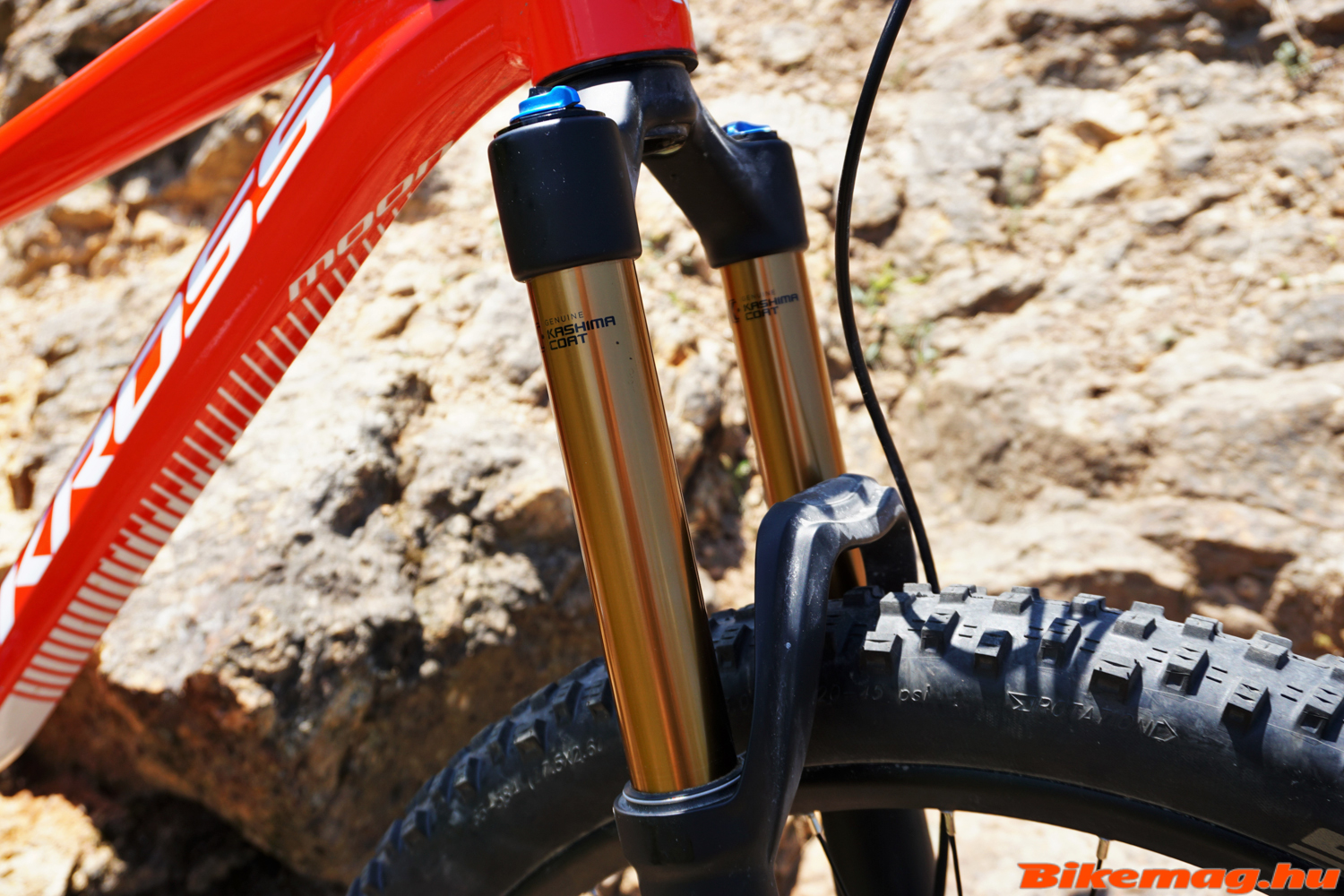 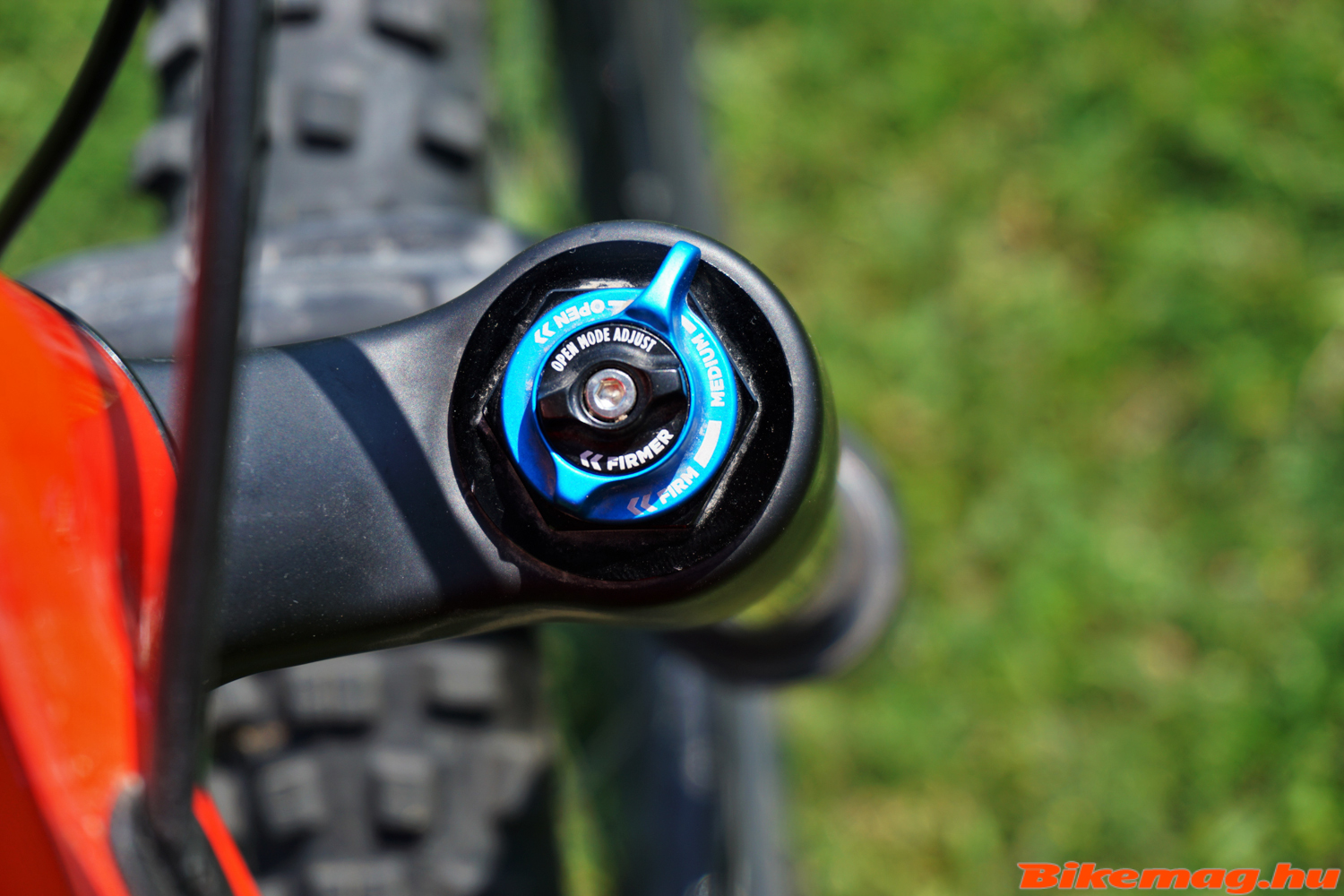 Since the Moon is an enduro frame, KROSS provides the possibility to mount a chain guide, the industry standard console is found just behind the crankset. The cables are hidden, routed inside the frame, resulting in an exemplary clean apperance, with beatifully sculptured entry at the head tube. They have no chance of touching the frame, even when the handlebar is turned completely to one side. This might have been just a design element from the manufacturer, but in practice it has offers real benefits as well: none of the cables rub the paint causing unsightly scrubs on its beautifully painted surface!

Both the rear shock and front suspension fork are supplied by Fox. The Factory 36 has 160mm travel, a BOOST 15×110mm thru-axle, and the steerer is naturally tapered. It also features the special Kashima Coating on the sliders to make the travel even more smooth while also increasing its durability. At the back we find the Factory DPX2 rear shock perfectly complementing the front fork, it has the same elaborate and precise rebound and compression settings among its features. It can be configured for a wide range of terrain and rider preference. If we are discussing Fox equipment, we should also mention the Transfer Post dropper seat post found in the Moon 3.0, it even comes in two versions: either 125mm drop with 409 mm overall length (S/M) or 150×456 mm (L/XL) depending on the size of the frame. It is activated from the handlebar, the cable is naturally routed inside the frame. 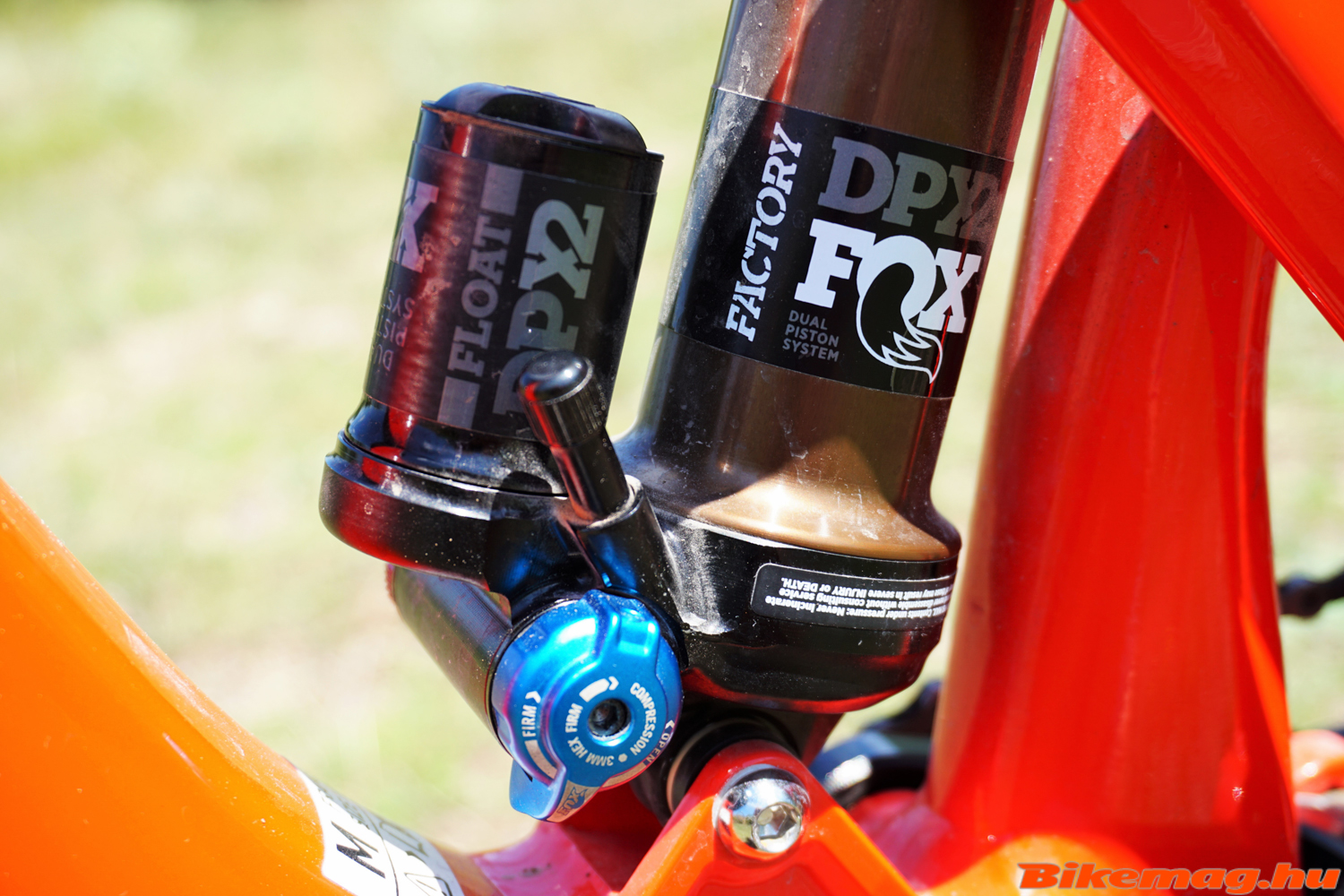 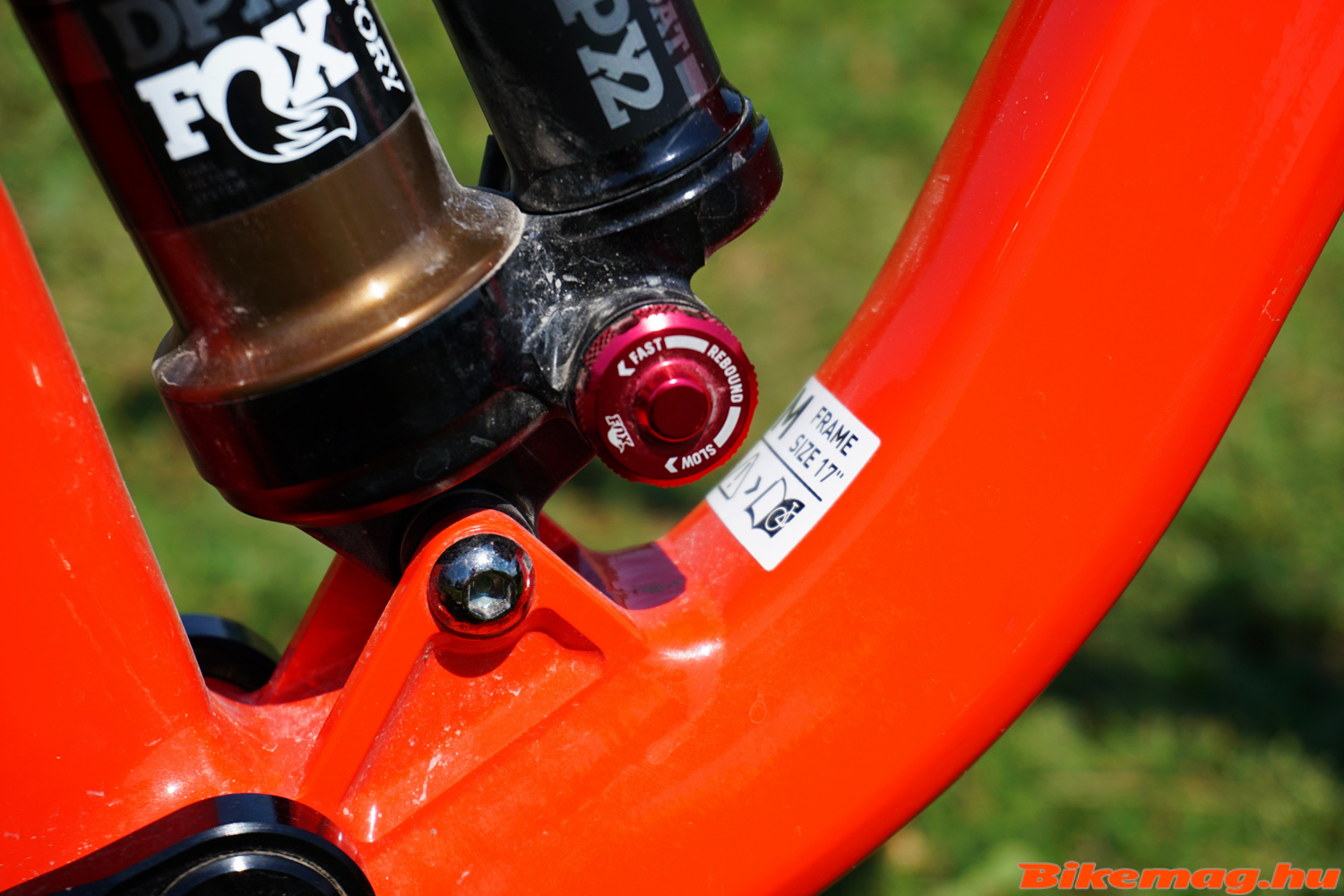 The shifting duties are handled by the complete SRAM X01 Eagle system with a 1×12-speed drive. On the crank set we find a 32T chain ring coupled to a 10-50T rear XD-Drive cassette. This results in a precisely defined 500% transmission range, the essentially has the same spectrum as full triple chain ring drive system, albeit with larger jumps between the gears. But there is actually no comparison between the two, since the 1×12 system is much more simple to use and maintain, its very reliable, offering a gear range that will get you up pretty much any incline. 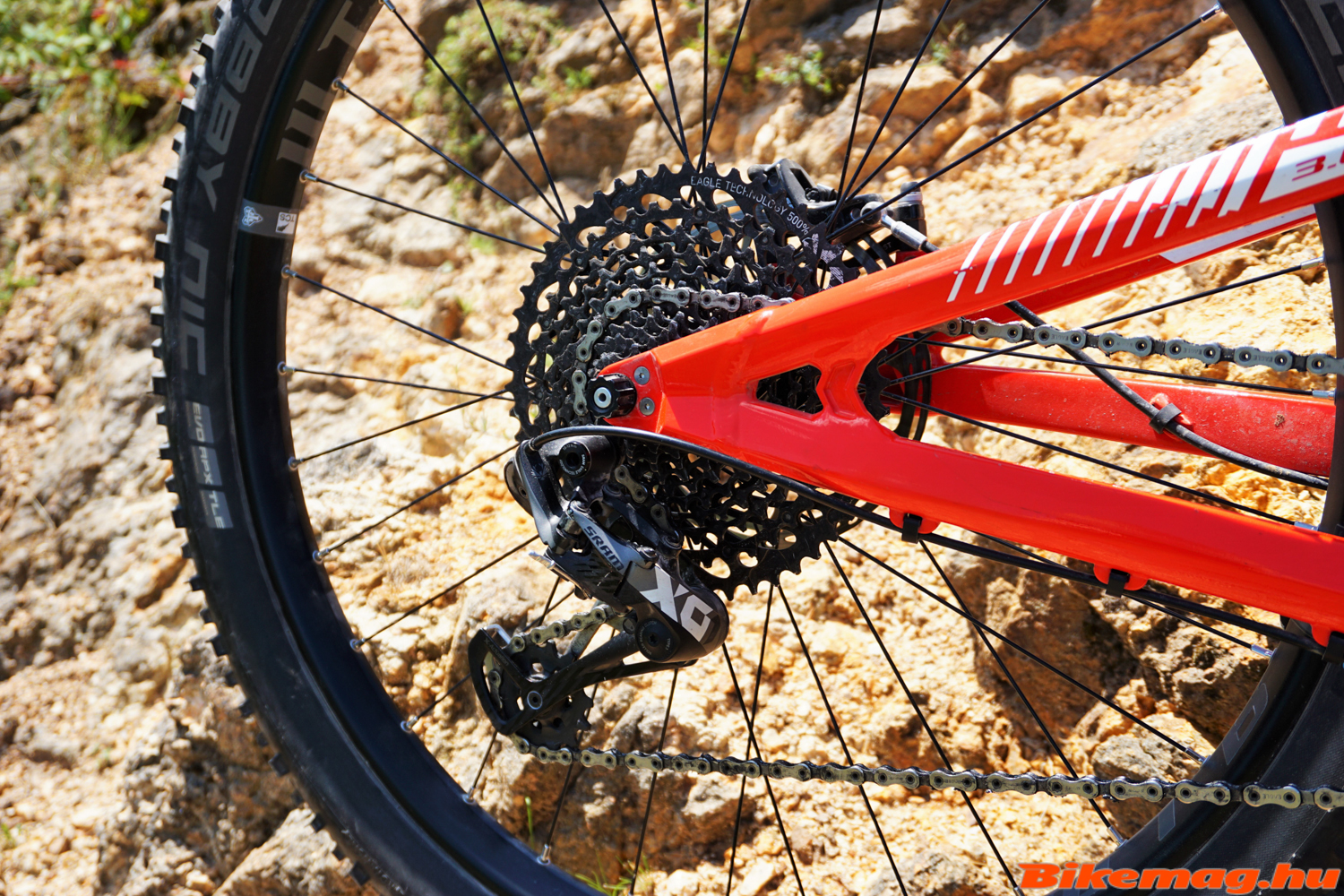 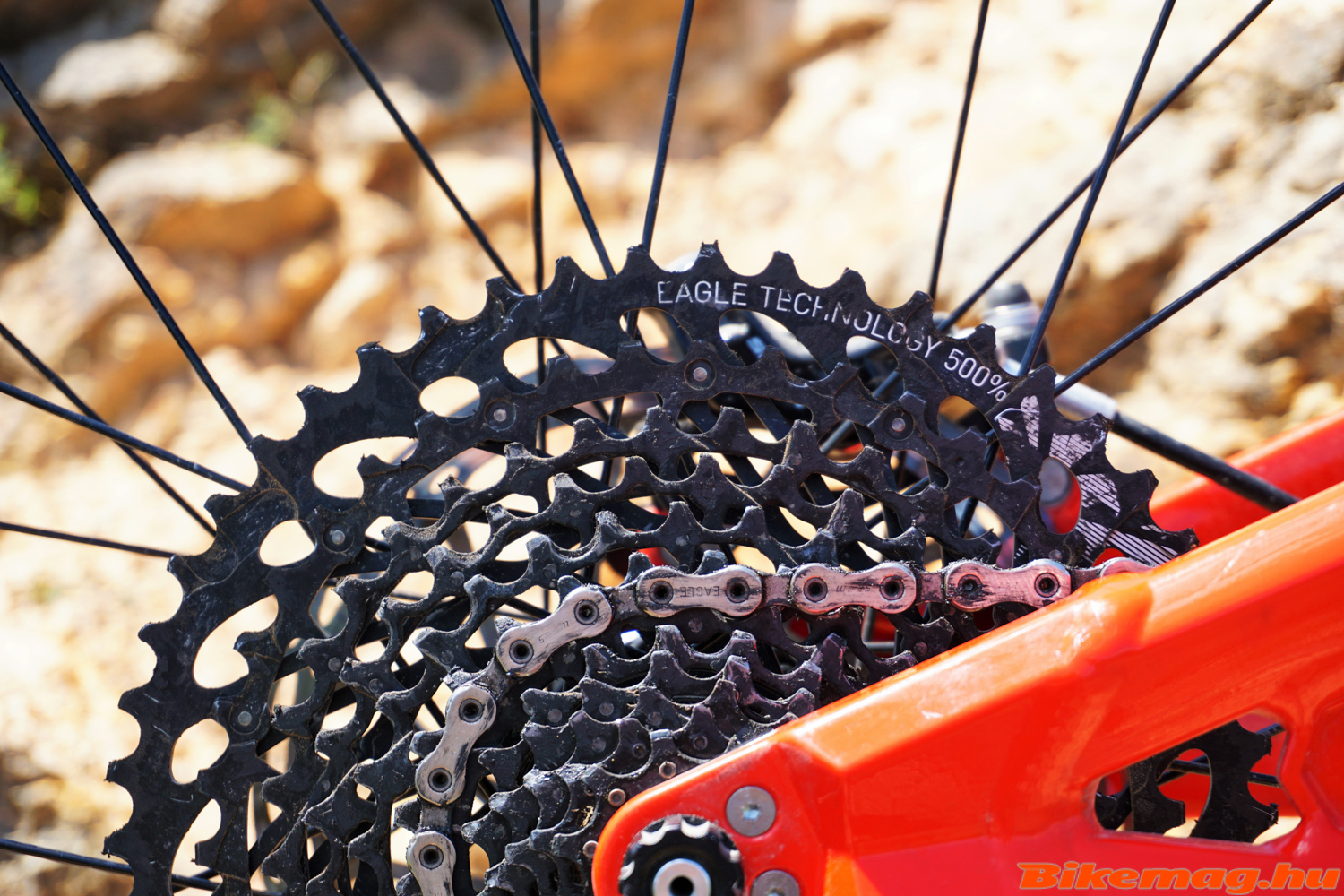 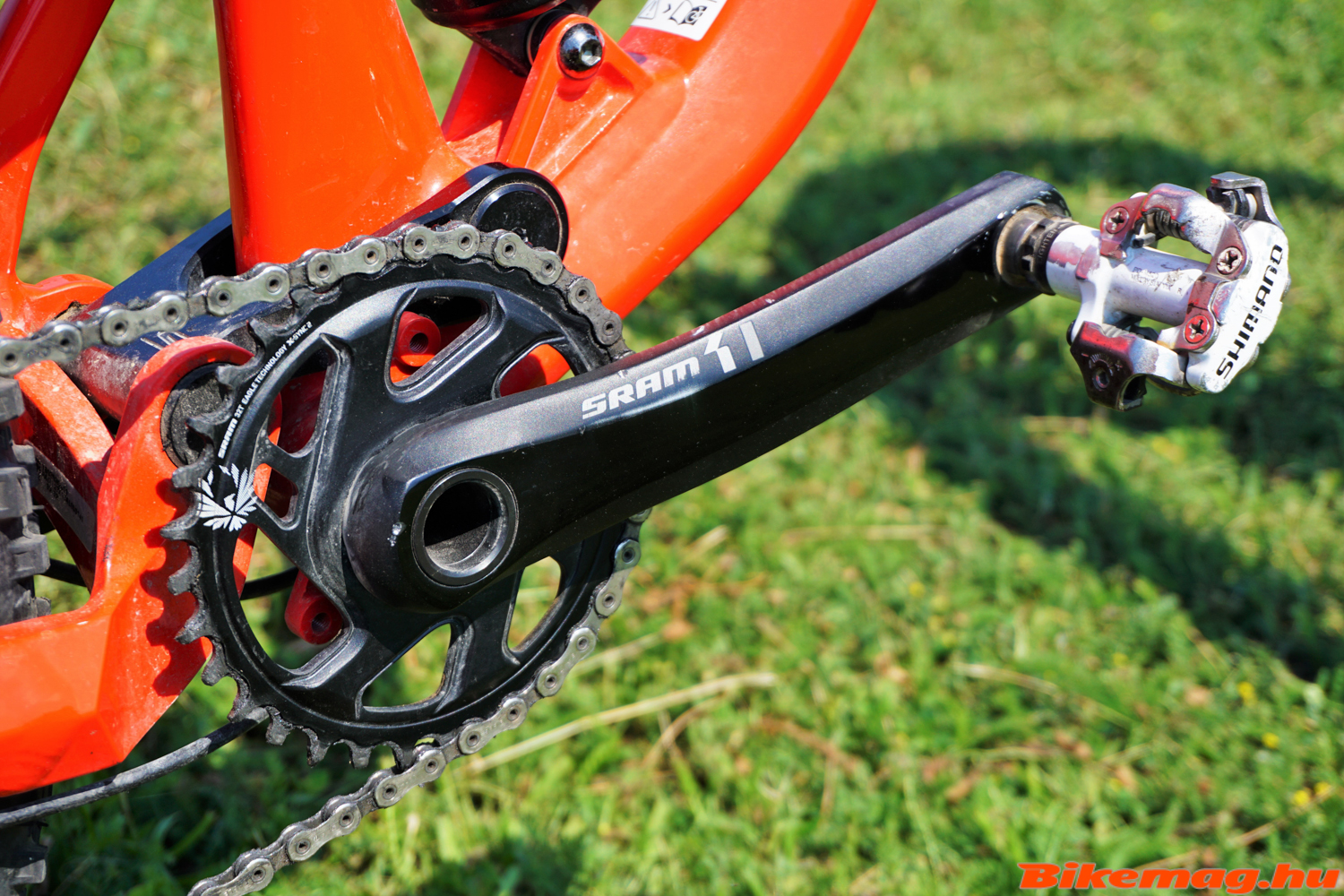 KROSS chose a braking system with serious power for the new Moon. Not many users will complain about the performance of the SRAM Guide RS brakes. it has 4 pistons and 200/180mm discs, so stopping with the bike shouldn’t be an issue. Last but not least, this brake set is surprisingly light. 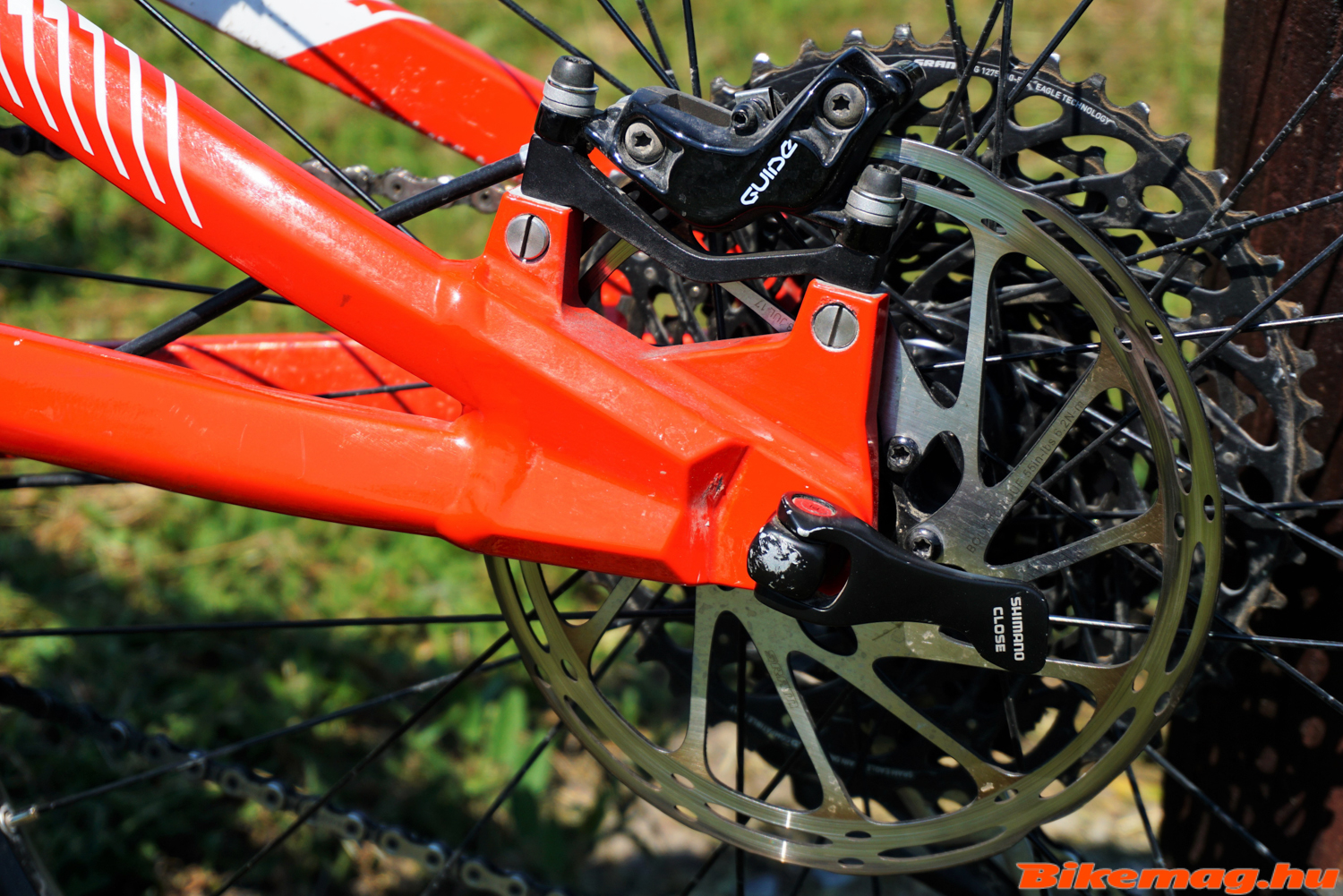 27.5″ WTB Asym i29 rims are laced to this BOOST-standard hub set, resulting in very strong wheels at a more than reasonable weight. In addition to this, the tires are not skinny XC pieces either: the 2.6″ versions of Schwalbe’s venerable Nobby Nic are also used by many enduro competitors. 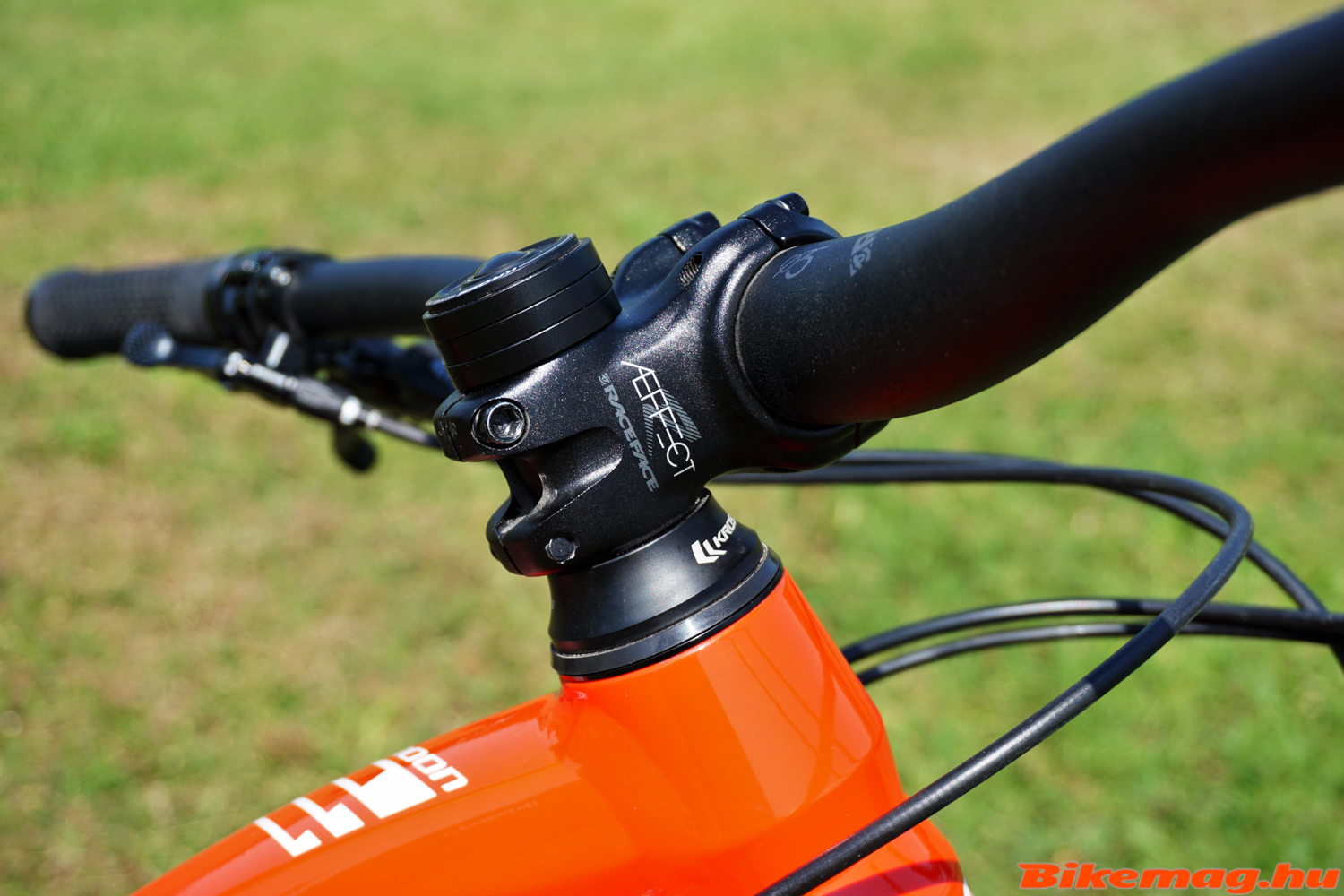 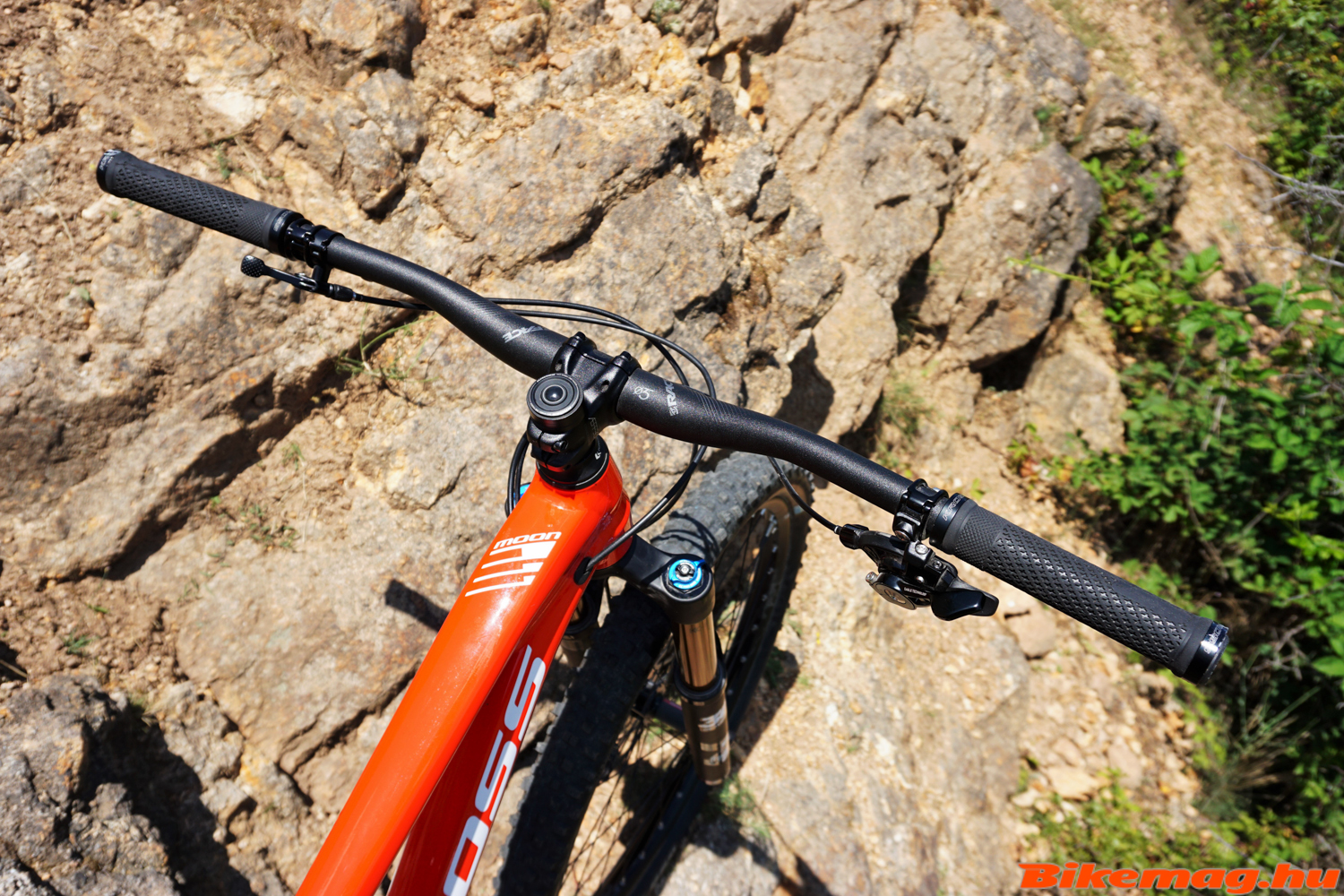 The handlebar setup comes from Raceface: the Aeffect bar and stem combo has a generous width of 780mm, the stem is 35mm long with 0-degree rise. 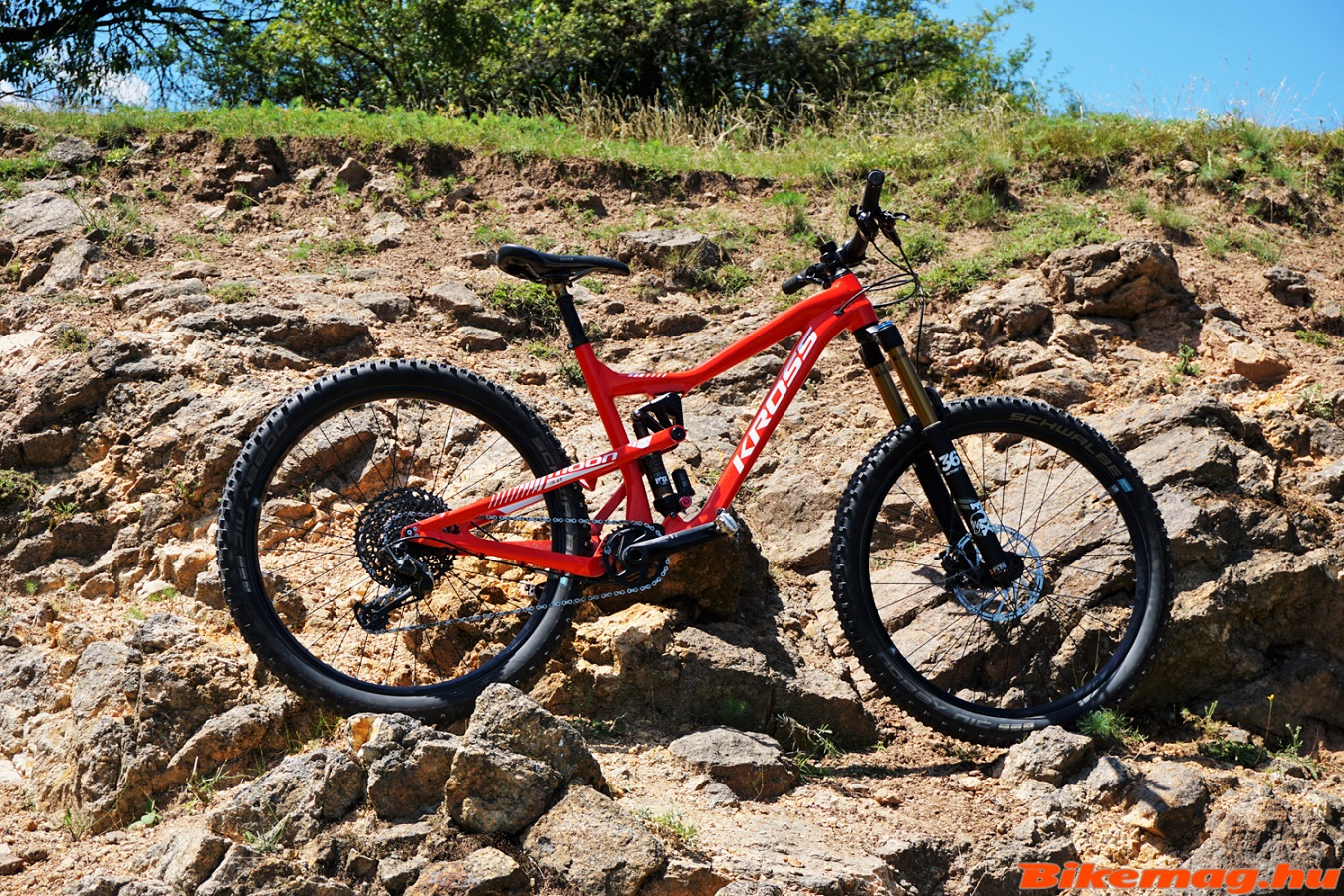 Let’s take a look at what the “Fire Red” Moon is capable of!

I generally ride on local trails where there is no chairlift or road for transporting the bike. So for me it’s important to be able to ride all the way to the summit, to experience the sheer joy of the descent. When testing the Moon, I actually had to cross the whole city, since car transport proved to be quite cumbersome. And the ride was not as bad at all, in fact the bike behaved very well on pavement, something I wouldn’t have expected. It was only the 2.6″ tires that held the tempo back, otherwise I experienced no problems during this rather unusual warm-up. As I reached the trail, the gradient went upward, but the bike continued to provide satisfaction. Once set to “firm”, the suspension doesn’t move noticeably, but still provides good traction. Of course there were limits to its climbing performance, since at a low speed the effect of the shallow head tube angle could certainly be felt. It made the handling a bit difficult, and on very steep climbs it tended to raise the front end. But this is something we come to expect from a long-travel bike with a geometry optimized for stability on fast and steep descents. It is not an XC bike, we have to accept this. However, if I could manage a faster but still moderate pace (by XC standards), these handling difficulties all but vanished. I would have no quarries taking the bike on big hills, provided I have the legs to keep the pace relatively high. 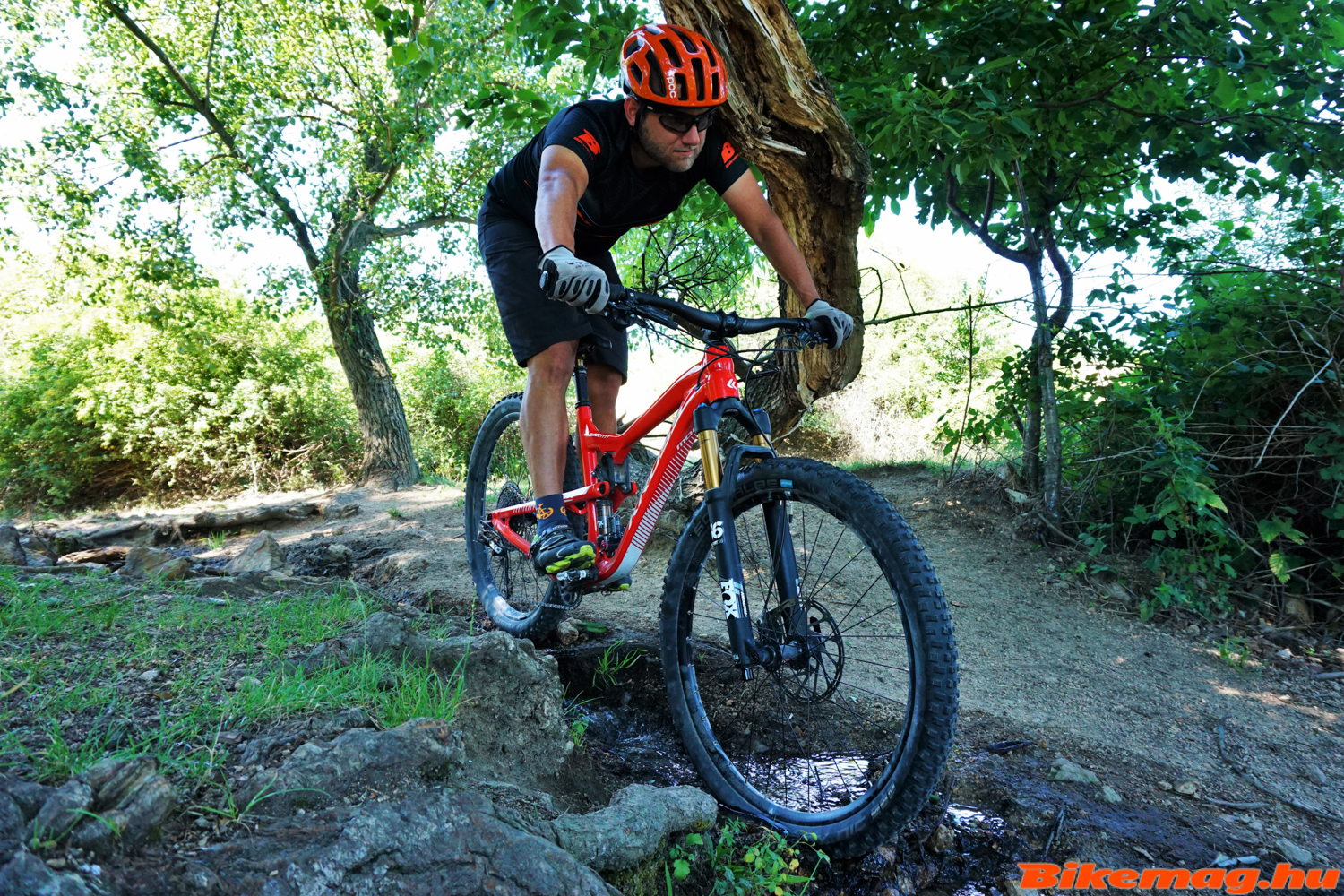 Once reaching the summit, the rider should take sip from the bottle, select lower compression, drop the saddle and begin the part of the ride what this bike was actually created for. The Moon is a “monster” which knows no fear, and simply rolls over everything in its sight. Nothing can stand in its way, and all the rider has to do is else to enjoy the trail. It can contain rocks, tree trunks, switchbacks, even obstacles that have to be jumped: with the Moon all that is solved. I was stunned how easy it was to tackle the previously insurmountable obstacles on this bike. There is a “boogey” for me in form of a drop off that I rarely dare to ride: but with the Moon I just took it, then wondered why was it so difficult to ride this section of the trail previously. It is incredible how even the most challenging slopes can be ridden. The brakes are really powerful, these are is the strongest SRAM stoppers I have ever used, and are I was glad that someone has already “burned in” the discs on this test bike before me! 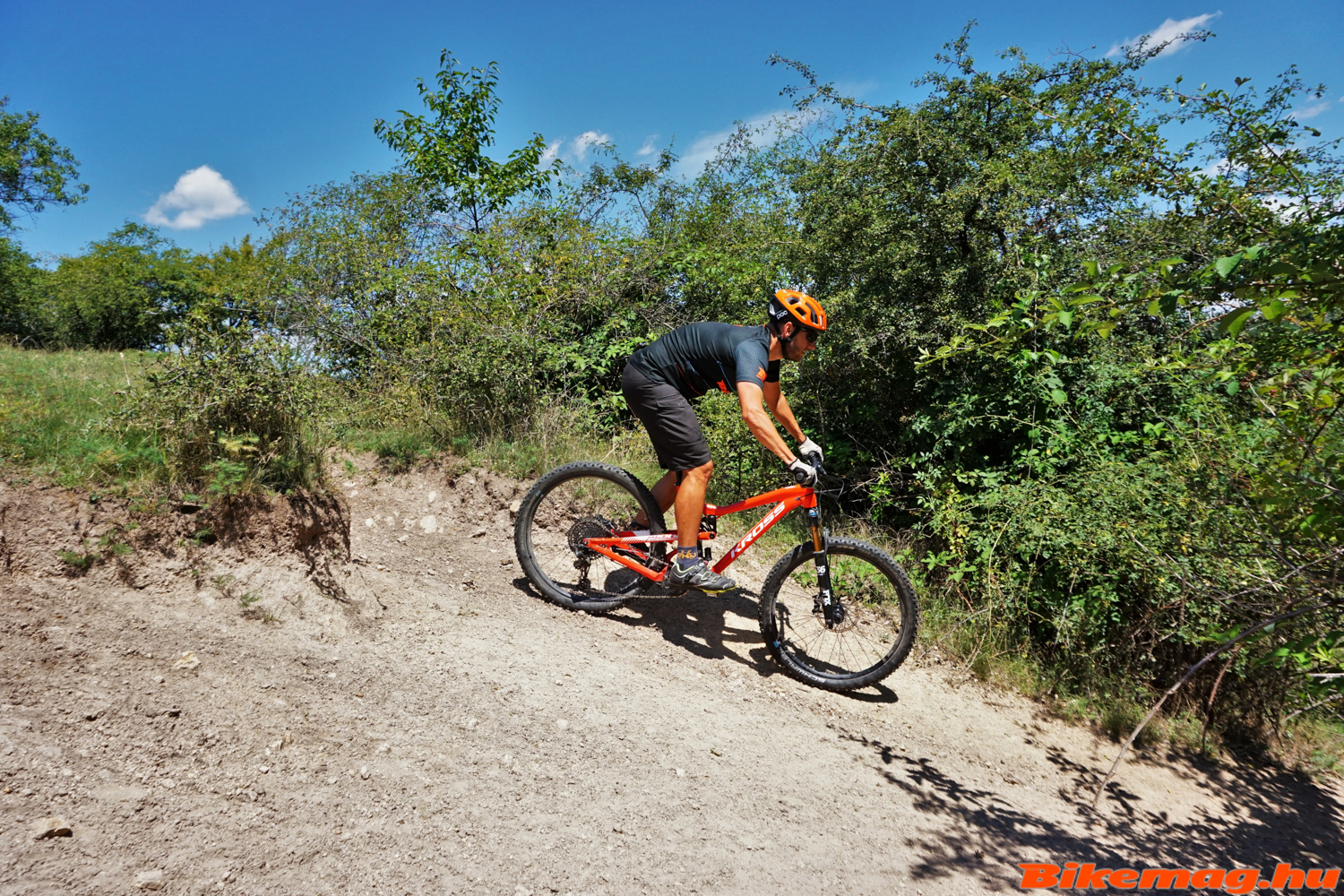 Even more surprising was how good the Moon behaved in the corners, despite its tempo-oriented enduro geometry. Naturally the handling is compromised at low speeds, the stability suffers, but we’d rarely descend slowly with this bike, so it’s not a deal breaker. And the steeper the trail got, the better the bike was in the corners.

Another positive is that the wheels can be removed and installed pretty quickly, which cannot be said about most of the thru-axle systems on the market. So transportation is much easier, the Moon saves a lot of time and hassle when the rider is off to a bike park. But the Moon 3.0 its not only a supreme tool for built tails: I think you would be inclined to take it with you anywhere. It can handle long distances, it’s well behaved, I’d say touring on it should be a treat. 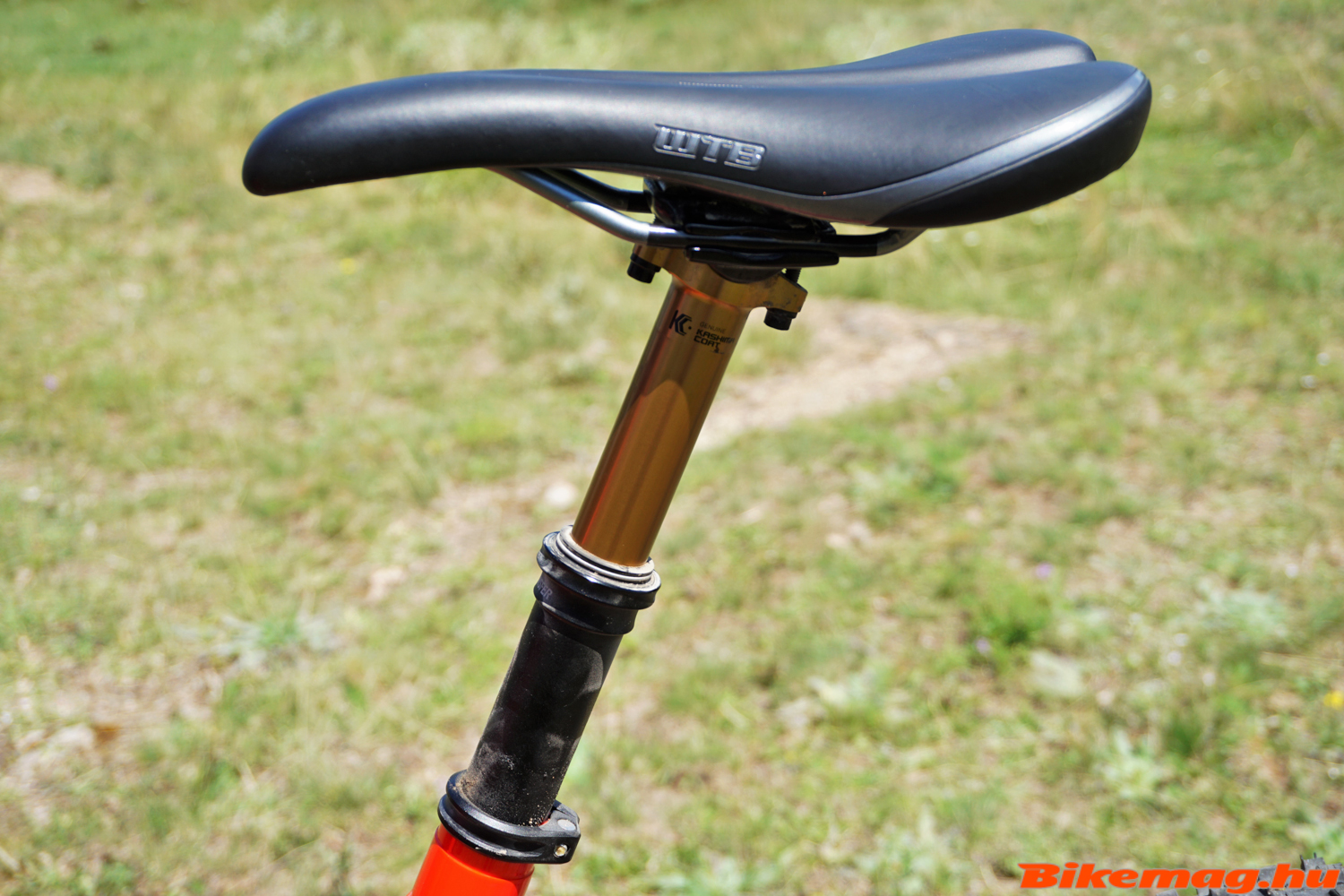 KROSS did not state false information by saying that the new Moon was the best enduro racing bike they ever created, This is exactly what I experienced during the test period: it descends like a real downhill machine, removing the fear element from mountain biking. When going uphill, it outperforms most top bikes in the enduro category, and can be ridden basically anywhere and over any distance the owner wished.

Yes, this “little” bike is a joy to ride! I quickly became attached to it, and had a tough time giving it back. I waited until the distributor started asking for it, later insisting on its return… 🙂 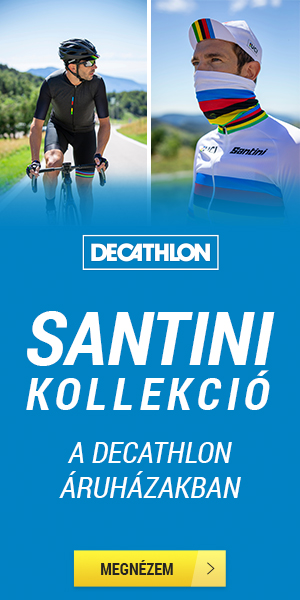