We received IGPSPORT’s top-of-the-line GPS cycling computer, the iGS618, which is ready to compete with major brands on the market. The brand is based on the Far East, and its high-end computer offers many useful features from professional training workouts to basic navigation to satisfy the needs and expectations of cyclists at large. 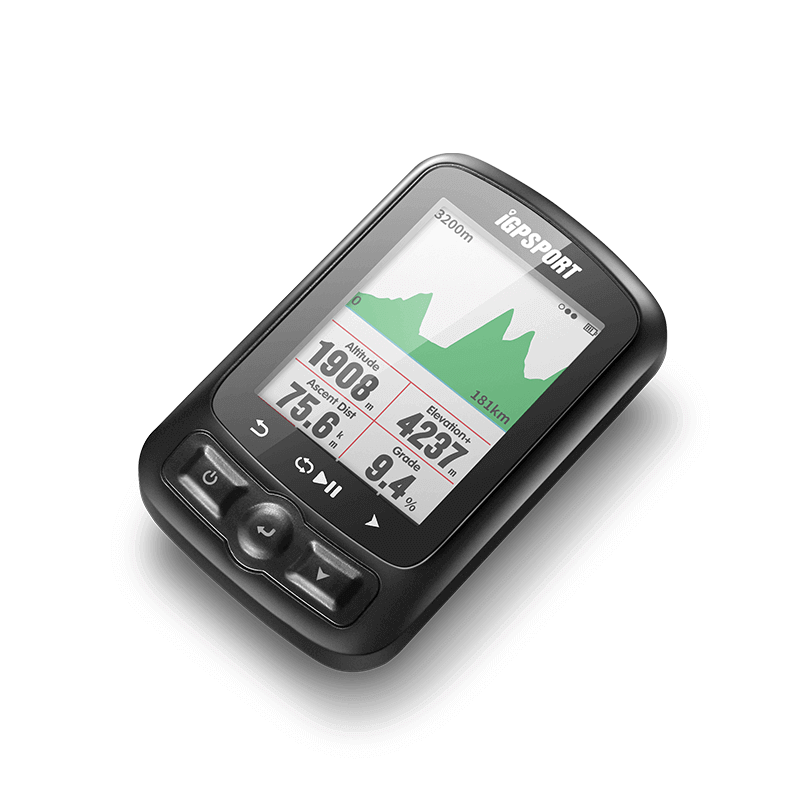 IGPSPORT is not a brand with a long history on the GPS computer market. It was founded in 2012, and since then it has developed and expanded its range of bike computers and accessories (heart rate monitor, speed and pedal sensors and mounts) in very impressive fashion. The iGS618 is the top of the line model which we have on test. It’s stuffed with a myriad of advanced functions, making it a price-sensitive, “no-nonsense” choice in the high-end category. 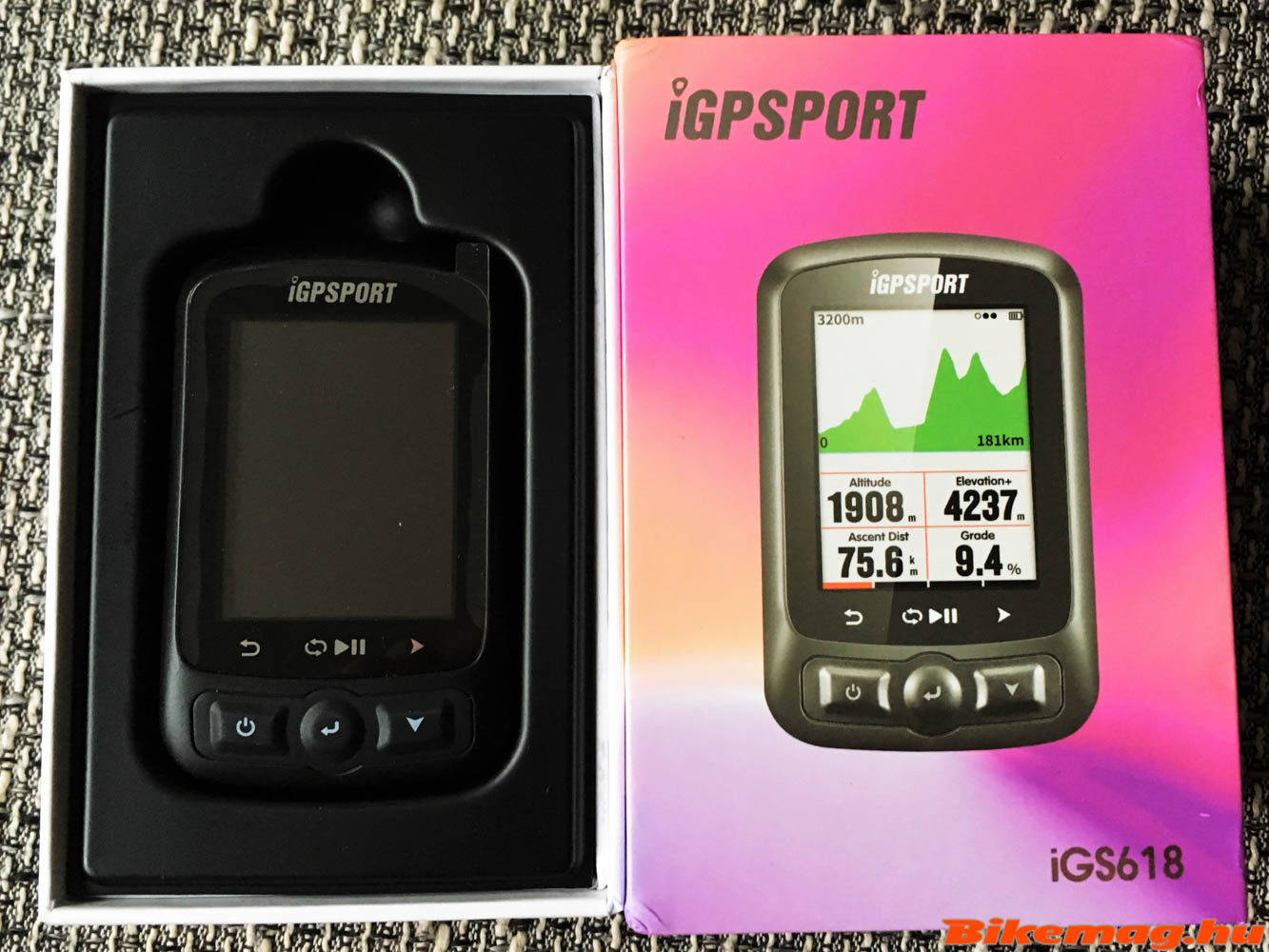 On opening the package – sent by postal delivery – I was surprised to find that the box design is indicative of a high-end product. In addition to the computer unit, inside I found two mounting supports and a USB cable, the brackets serve as handlebar mount for two bikes, the cable for charging or data transfer. By the way, mounting of the head unit the same as the Garmin standard, which enables different bracket options from third party manufacturers. 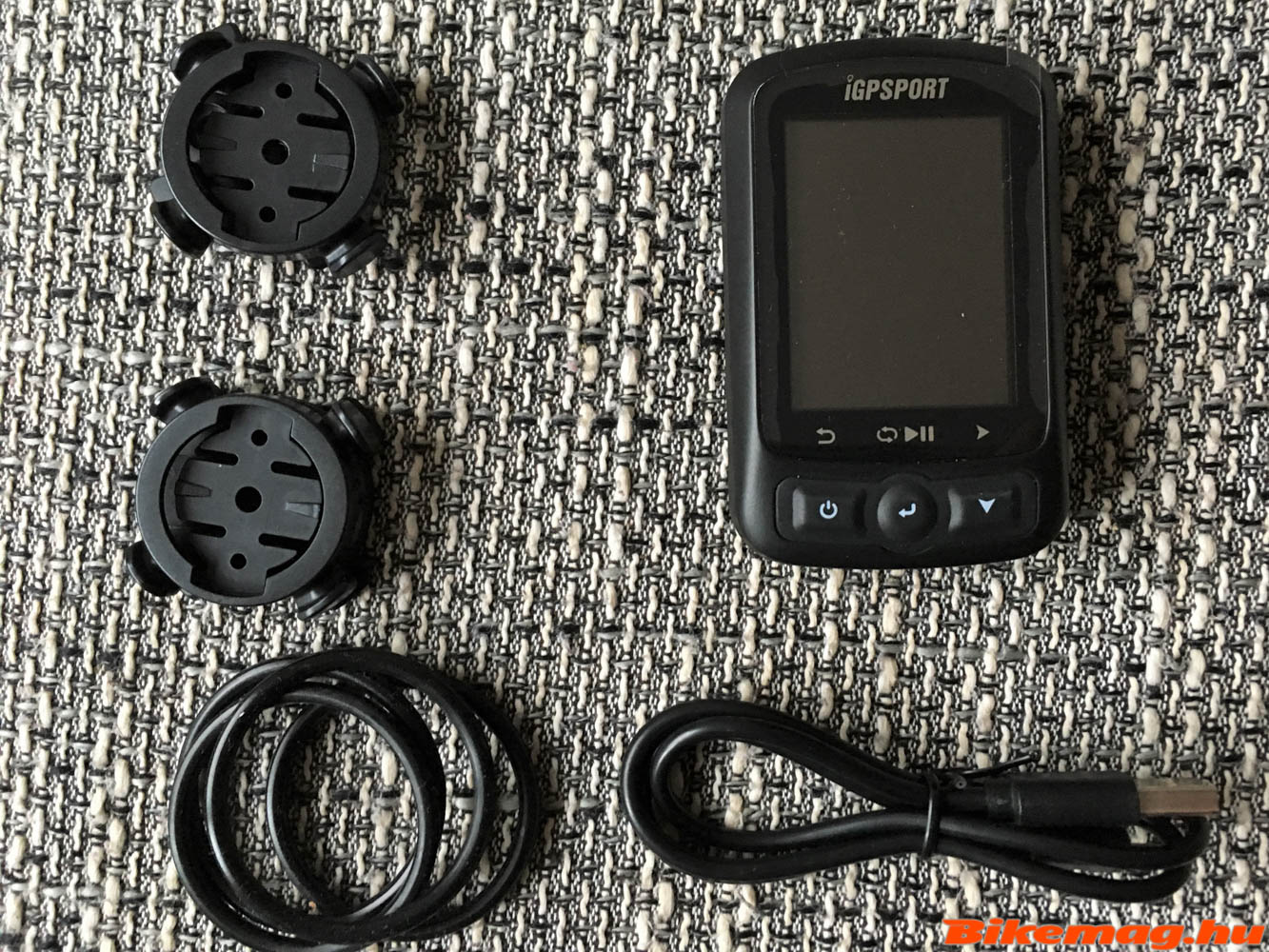 Holding the iGS618 in your hand, you’ll notice that it’s quite substantial, rugged, reinforced with ample of material. It seems that this is the price you pay for high-level IPX7 water resistance. The shape of the unit is unassuming, oversimplified, so I think not many customers will base their buying decision merely on appearance. There are no side buttons as all 3 controls are placed underneath the display. Initially I had some doubts whether 3 buttons are enough for so many functions, but it turned out not to be the case as I dwell into this question later in the review. Otherwise, the buttons have a strong rubber coating, they seem to be very rugged, not easily be torn off like in the case of some older Garmin computers. 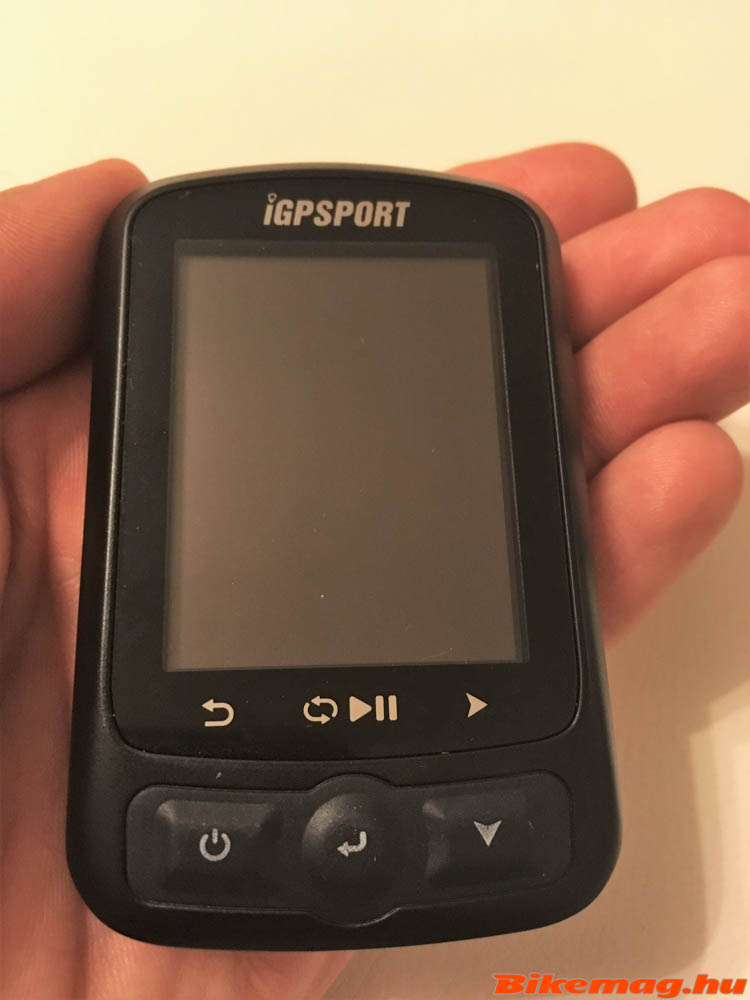 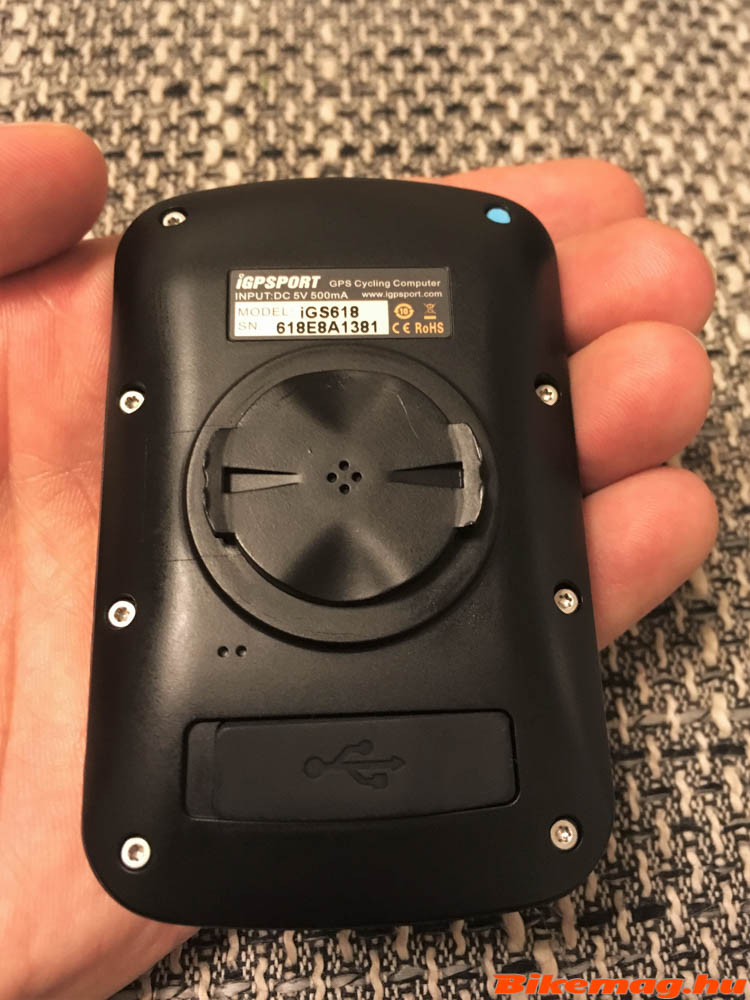 If you haven’t read the product description before the purchase (like myself), it may come as a surprise that the 2.2-inch display is actually a color one. I’m used to a monochrome display of my bike GPS device, so this was not my greatest priority when making the choice, but it is definitely an advanced feature. The iGPSPORT iGS618’s display can show no less than 5 data pages (plus navigation), and can be set up for cycling with 10 data items per page. I think no one needs so much data on hand while riding, but since the display can be fully customized, you are free choose and organize the amount of information you’re presented with. The choice is vast, and they can be grouped within the menu, including speed, pedal, heart rate, power, distance, altitude, time, gear shift and much more. He unit is compatible with ANT + and Bluetooth sensors, so the user can connect a power meter, a speed or cadence sensor and a heart rate strap. Another much-awaited feature was the iGS618’s ability to communicate with the latest electric gear shifting systems on the market. You won’t be missing out on any advanced functions if you choose this GPS cycling computer model! 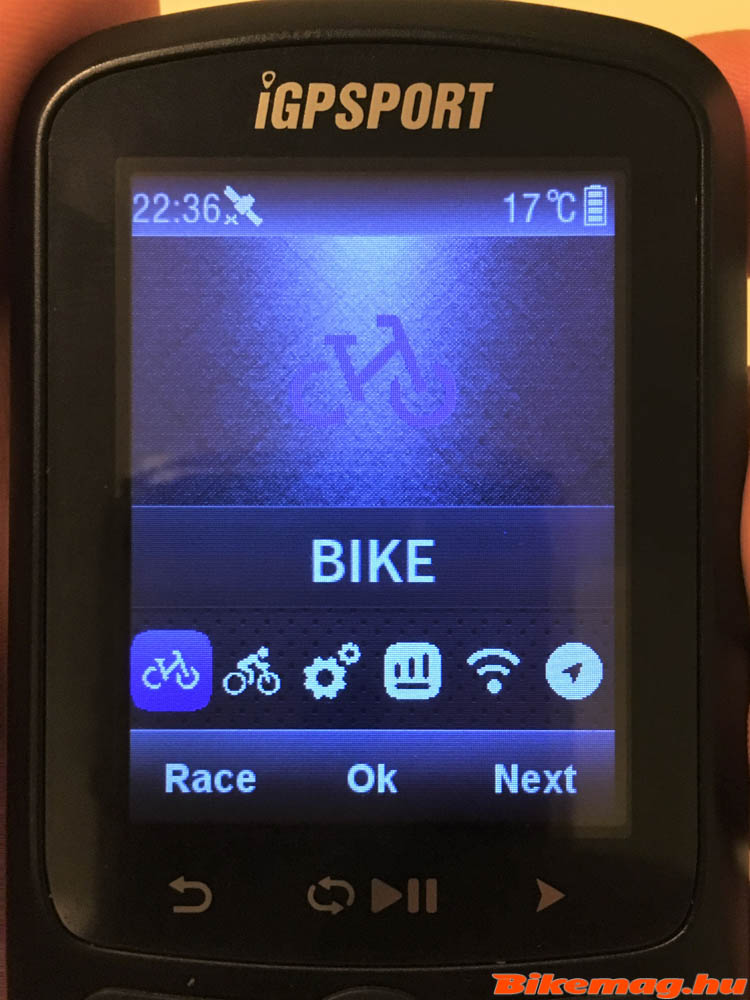 The 3 buttons on the unit actually do a good job of navigating through the myriad of functions. On the left we have the “back” function, the middle is “ok”, and the right side button is the scroll key. In the longer menus it’s sometimes a bit cumbersome when one accidentally “steps over” the desired function, forcing a re-scroll through the entire menu. Otherwise the menu system of the iGPSPORT iGS618 is quite user-friendly, with a surprisingly thoughtful and logical operation.

One can choose from a variety of “training” structures (e.g. race, training, indoor) and the device also allows setting up custom modes. The emphasis is not on what you call this new type of training (e.g. MTB riding, turbo trainer, etc.), but what the head unit displays while you’re performing the activity. You need different information for each type of riding, and these will be custom-set in the iGS618. Hence the unit need not be reprogrammed each time you start your ride, all you have to do is to select one of the pre-programmed modes, or one you have created in the menu. One can also add more bikes to the memory, and select different sensors for each one. For example, when the rider switch from the MTB bike to the road gear, there is no need to reset the sensors: the iGS618 knows which ones to look for. Connection is always automatic, it knows if you have a power meter on one bike and not on the other. 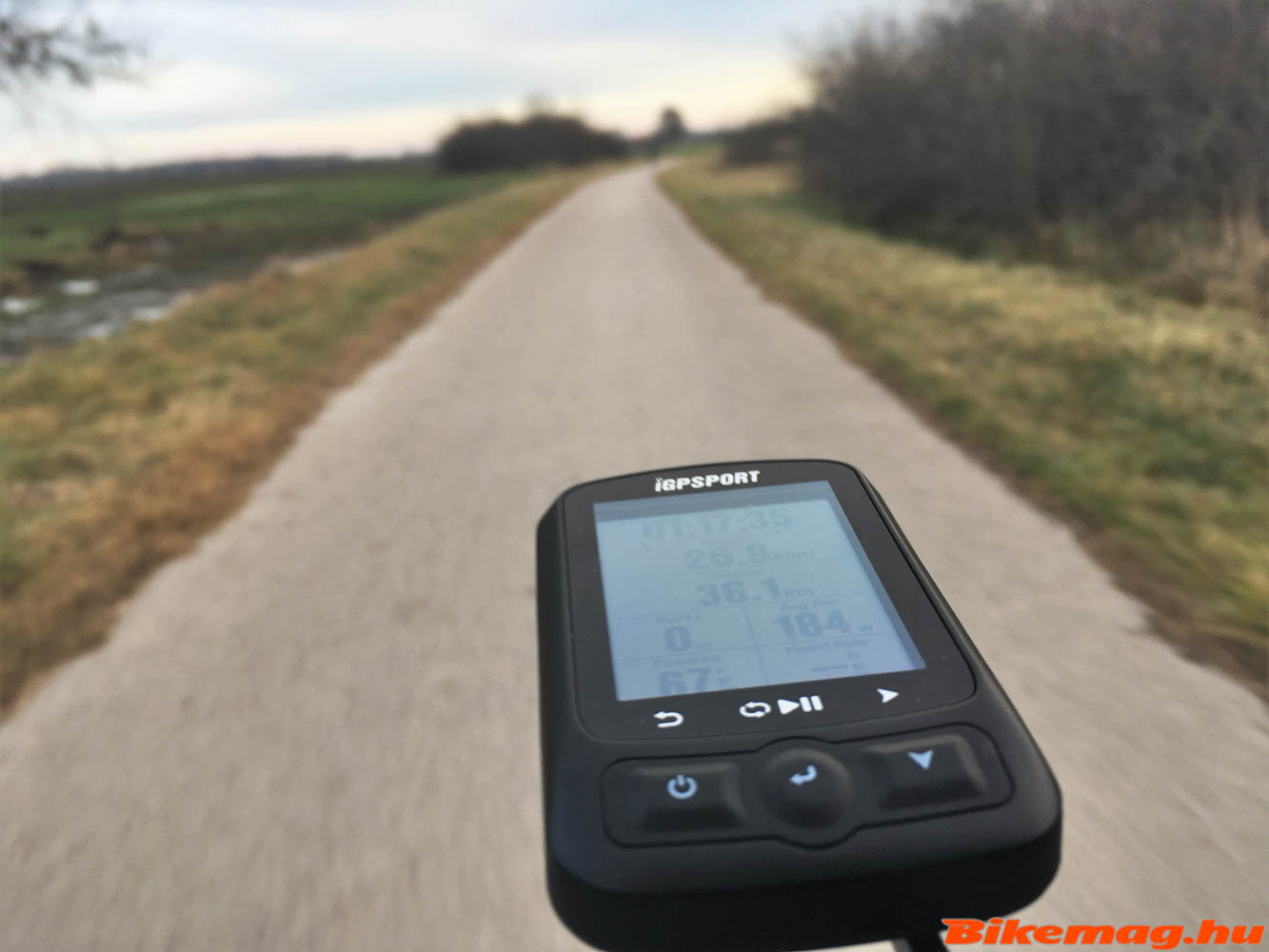 Turning on the iGS618 you’ll quickly find a GPS signal –supposing you’re outside. There is no need to spend minutes in front of the unit waiting to find the satellites, and besides the common GPS sources, the iGS618 can also see the Glonass and Beidu satellites. Immediately after setting off on your ride, the device lets you know that you’re on the move. A few second countdown will be on the display, and if you don’t switch off recording, the trip will be saved. The feature can be deactivated and the length of the countdown can also be customized. I found this to be useful and the custom modes are also welcome. Out on the road, I’m glad to report not having experienced any problems concerning data recording or storage. It’s unlikely that you’ll lose satellite connection, and the GPS connection is always stable. This can also be said for the communication protocol with the peripheral sensors, which meant that I had zero hardware problems while testing the unit. This is something I was a bit anxious about since iGPSPORT is not one of the well-established GPS manufacturers and I had some unfavorable experience with some GPS devices in the past. 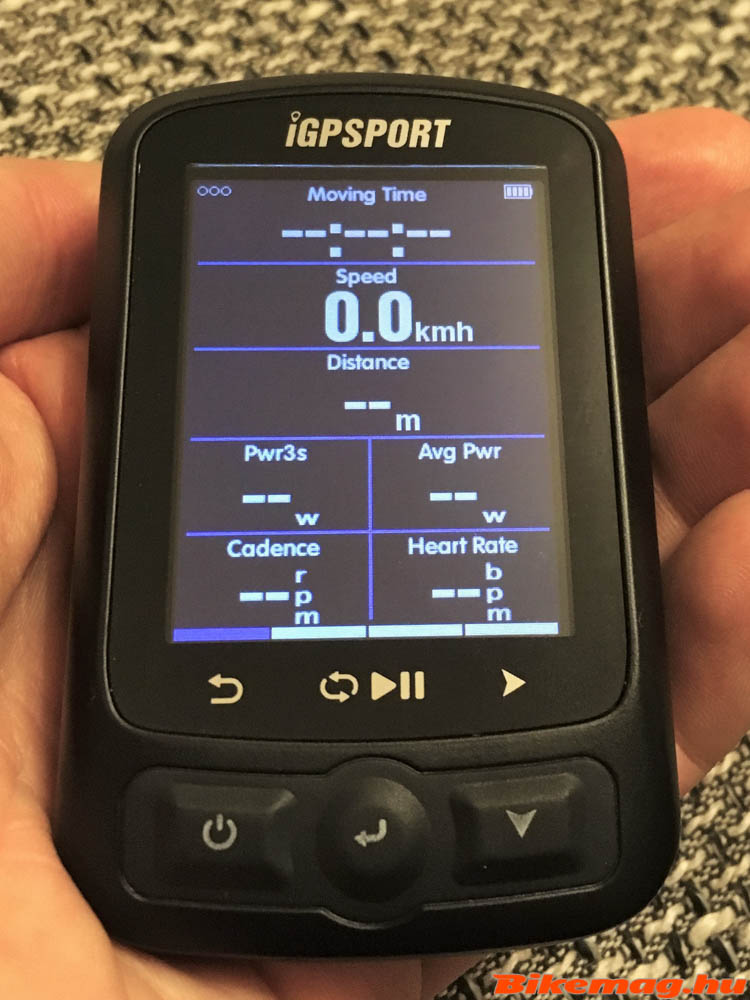 Due to the bitterly cold weather I was not able to test the maximum time of operation. The low temperature not only effects battery life but also my limits of riding outside. Before setting out and returning from a 90 minute “open-air” training session I rode on the turbo in the apartment, and also went through the data before downloading everything. Even with all this activity I had plenty of charge in the battery. The summer months would be a better time to make such a measurement, and I’m quite confident that the 20+ hours of continuous operation specified by the manufacturer is actually attainable.

Not everything is perfect as I discovered a software problem during one of my rides. When I select manual start-stop mode (manually stopping and restarting data recording), and the “pause” button is pressed, the computer unfortunately starts a new ride segment. This is due to the fact that the same button is assigned for both of these functions, as the middle button starts a new segment and also pauses the recording. I think this problem could be resolved by a software update where the developers reprogram the middle button: e.g. a long press for “pause” and the short for the “new segment” function. This is not a major shortcoming since most use the computer’s auto start-stop by default, which provides a convenient way of getting around this annoying deficiency. 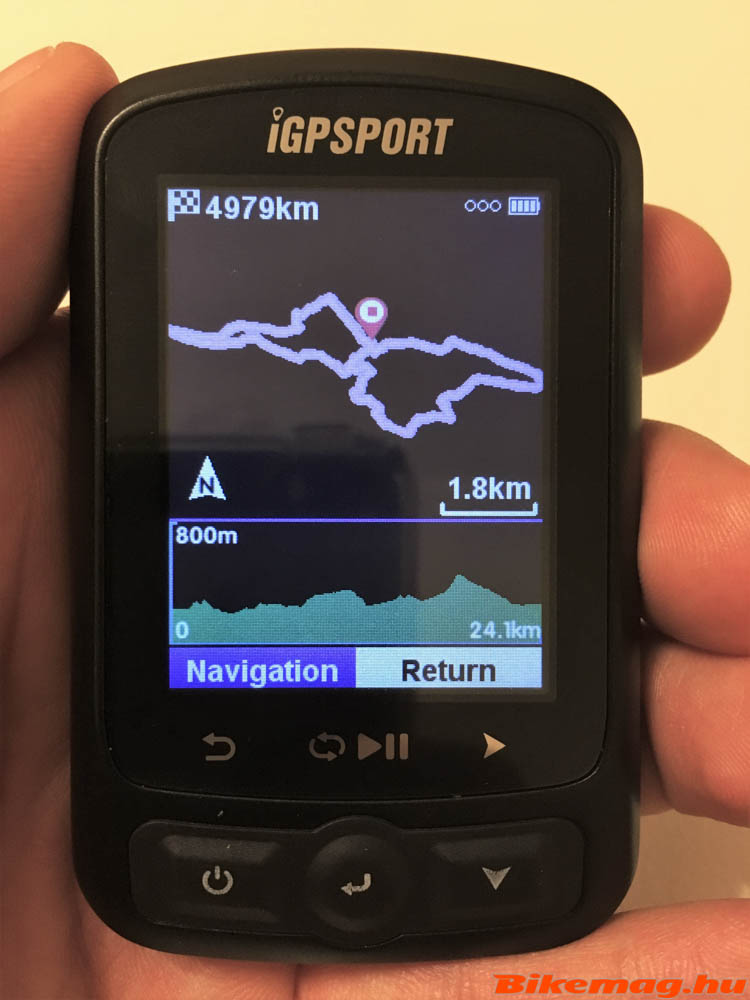 We haven’t yet mentioned the “live” navigation function, although it’s one of the iGS618’s main features. You can add maps and GPS routes to the unit’s memory which you can follow on the display while riding. You will not be able to plan your own routes, but the device will make use of a pre-loaded or a previously recorded route. The rider needs to add maps separately by dragging the map file to the appropriate directory, and you’ll will find almost all the countries on the iGPSPORT home page. The unit will display the road network – unfortunately without the street names – during navigation. The map usage is limited in another way, since the rider can only upload only one country at a time in the device’s memory. This may cause a problem if you plan to cross country borders, like during a multi-day bike tour. And since only national roads are included, trail riding is not catered for. Another deficiency is that the navigation function is not very helpful at the intersections, so it’s best to stick to the major roads, not the less frequented lanes and paths which many of us cyclist use to avoid heavy traffic. 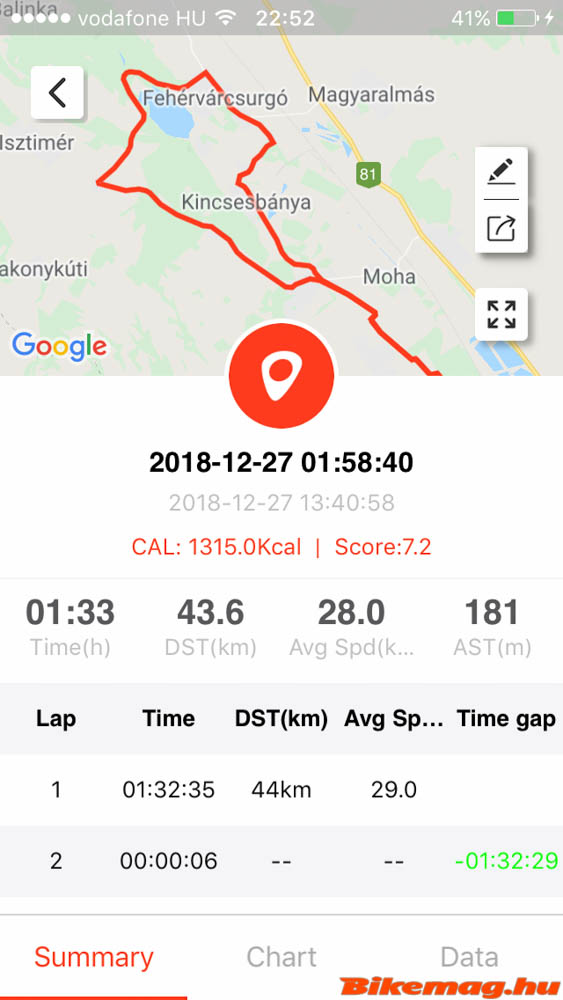 In today’s world data capture is just one of the features of a cycling-specific GPS device. Nevertheless it’s essential to most riders, and there are plenty of tools to aid the process in the iGS618. Transmitting the acquired data to the internet is the main target function of all advanced models on the market, with as many compatible applications as possible. IGPSPORT uses a software developed in house for this purpose, allowing the rider to upload data to a mobile application via Bluetooth or alternatively to the computer via the supplied USB cable. Both ways of uploading offers training analysis functions developed by the manufacturer, and automatic Strava synchronization is also available. The training file can be uploaded directly to Strava or Trainingpeaks without the use of the iGPSPORT application, which is a real bonus for users of these community sites. The only feature missing compared to the best devices on the market is Wi-Fi compatibility. I didn’t find this to be a major deficiency as the Bluetooth connection to the phone is surprisingly quick, much faster than what some competing manufacturers provide. 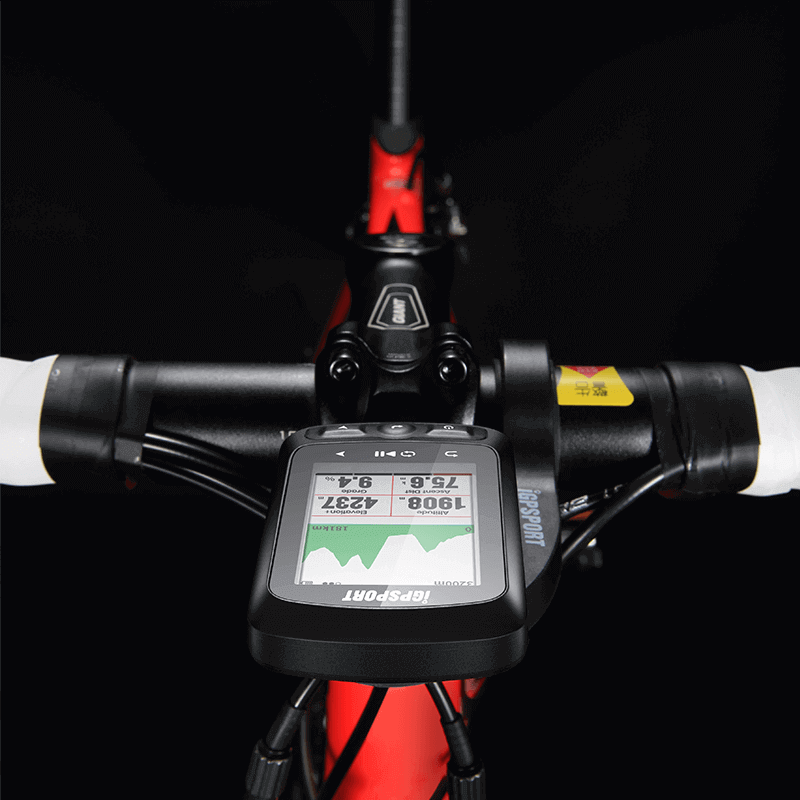 The IGPSPORT iGS618 proved to be a good companion. From hard training rides preparing for the next race season to leisure trips involving the discovery new routes with the navigation function, this GPS device can cater for almost everyone’s needs. I can’t think of any feature I missed while riding with the iGS618, maybe trail navigation could have been a useful one to experiment with. Otherwise some features are much more elaborate than what my cycling life necessitates. The one and only real blunder is the small software bug I found, but this will likely to be fixed with the next software update. I presume the buttons may experience paint abrasion through sweaty fingers in summer heat, but the thick rubber will hopefully stay intact. Operation of the unit is quite intuitive, and it’s not too difficult to memorize the menu system and navigate through it with the 3 simple buttons. All in all, the iGPSPORT iGS618 didn’t disappoint: I certainly got much more than I expected.

For more information CLICK ON THIS LINK.
Use this coupon for sales: GBIGS618-YY