Giant’s top-quality bike range is accompanied by a number of accessories worthy of the brand’s premium image, including a recently introduced GPS computer. And it’s not just your run-of-the-mill cycling GPS device: the NeosTrack was designed in collaboration with professional riders. 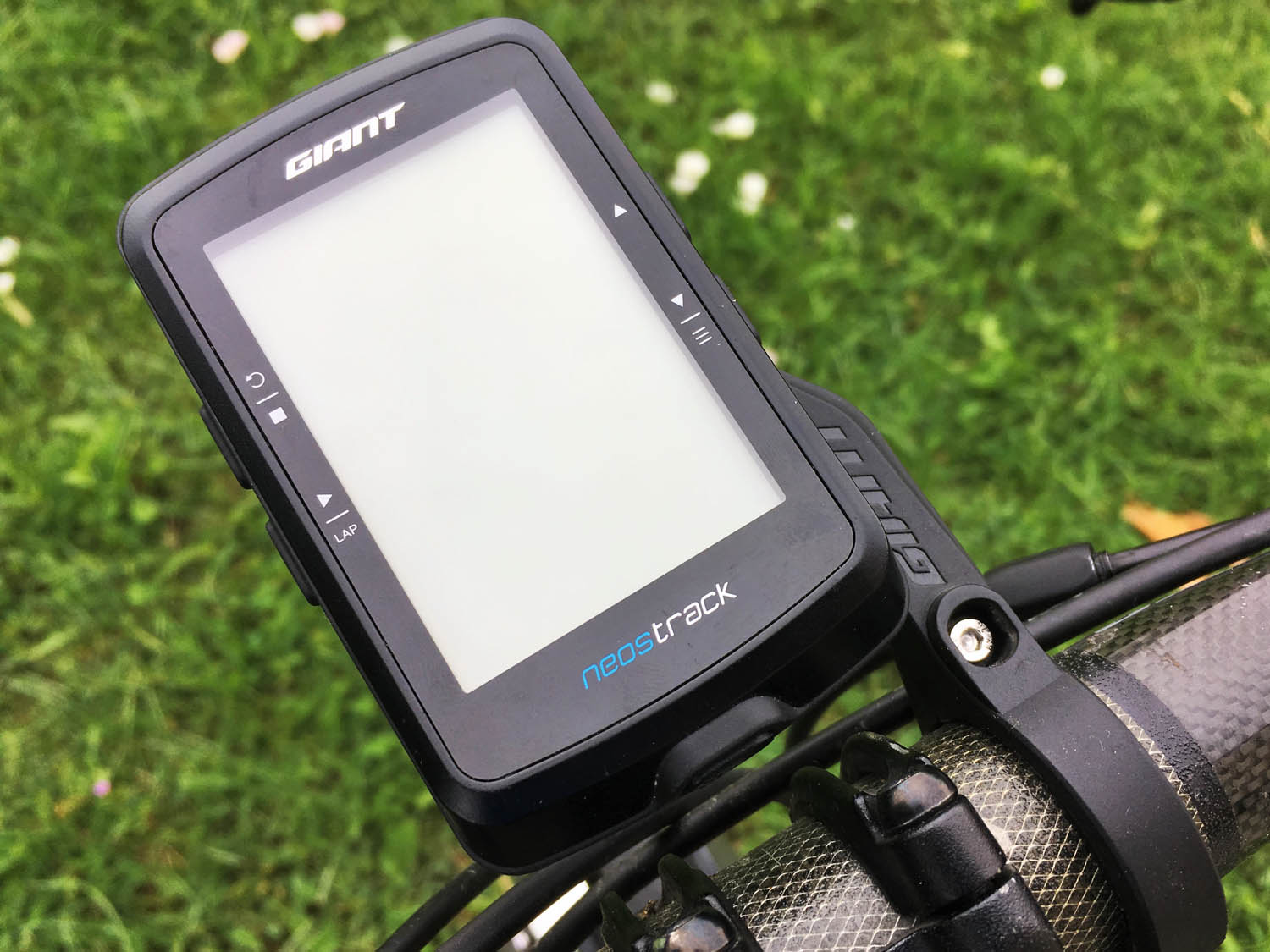 Giant is open about the development of the NeosTrack. World Tour Team Sunweb is sponsored by the Taiwanese bike brand, and they were in need of a GPS computer. Since Giant did not have any such product in its vast range, they sourced one of the industry’s top device, the Bryton Rider 530, and developed their own software to suit the requirements of pro riders. Giant listened to the team members, asked what features they want to see in a GPS device, and carried out the engineering based on their feedback. The first prototype has been produced, and Team Sunweb returned a list of 23 features that should be added to the computer, in addition to 12 upgrades to existing features. Giant engineers didn’t even wink at this detailed wish-list, and immediately dove into further development of the software. Moreover the list also included some hardware modifications, like placement and layout of the buttons for easy and quick access. This was the rather unusual birth of the NeosTrack. It is worth noting that these computers are manufactured on Bryton’s production lines, the heart of the model is still the ever-popular 530, and even software bears a close resemblance to this predecessor.

I became very excited about this test opportunity. I was just looking for a new GPS computer, since my power meter has not been cooperating well with my existing device. Considering its reasonable price and the abundance of extra features, I was ready to purchase the Giant NeosTrack as soon as became available. Fate had it, I had a chance to try it before buying he unit, and I have to say that the Taiwanese brand’s GPS computer suits me perfectly. I had no complaints concerning the operation of the device and its communication with my power meter during the test period. On the other hand, even though the test period was unusually lengthy, I still did not have the time and will to try and utilize all its functions! 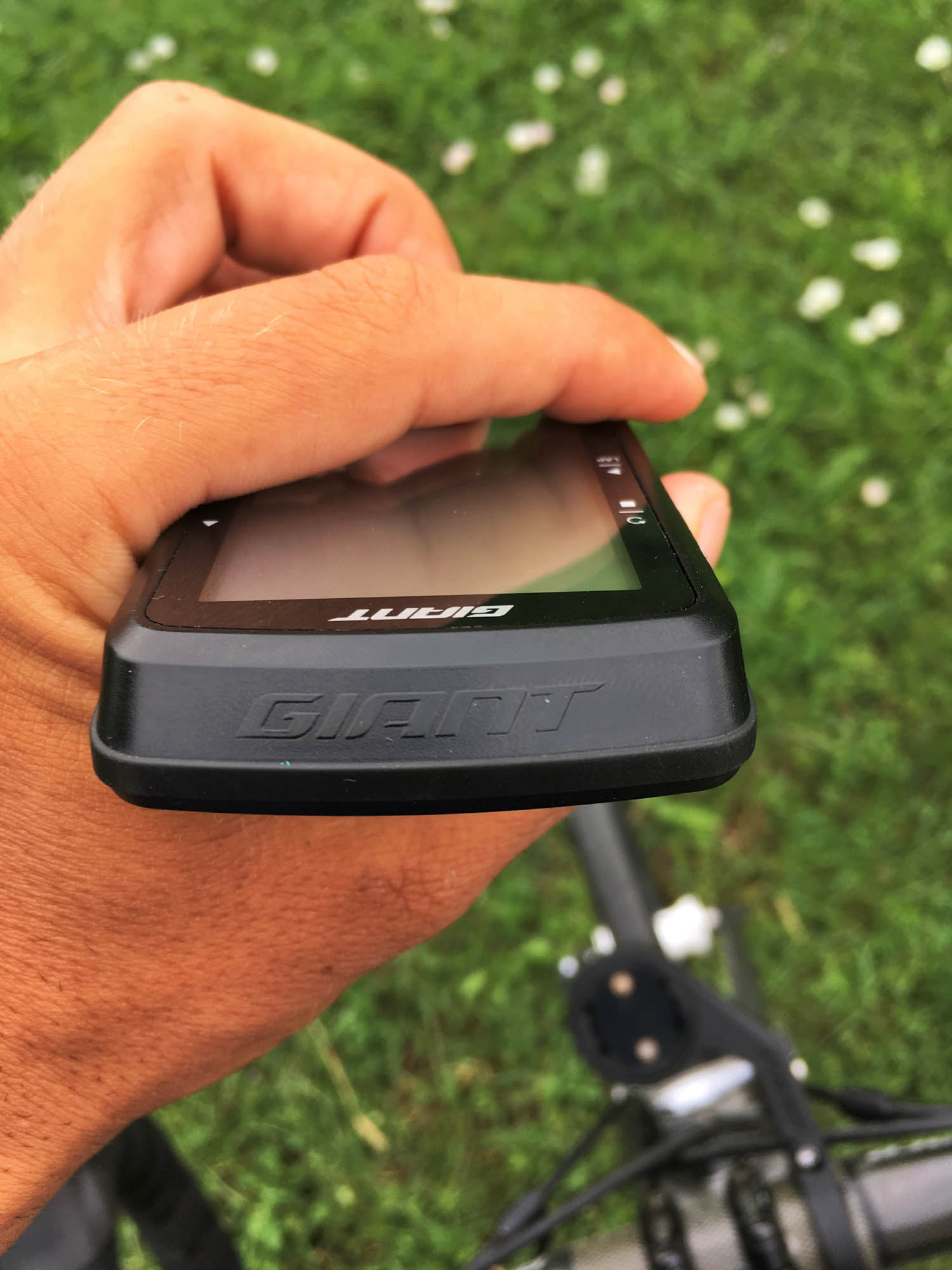 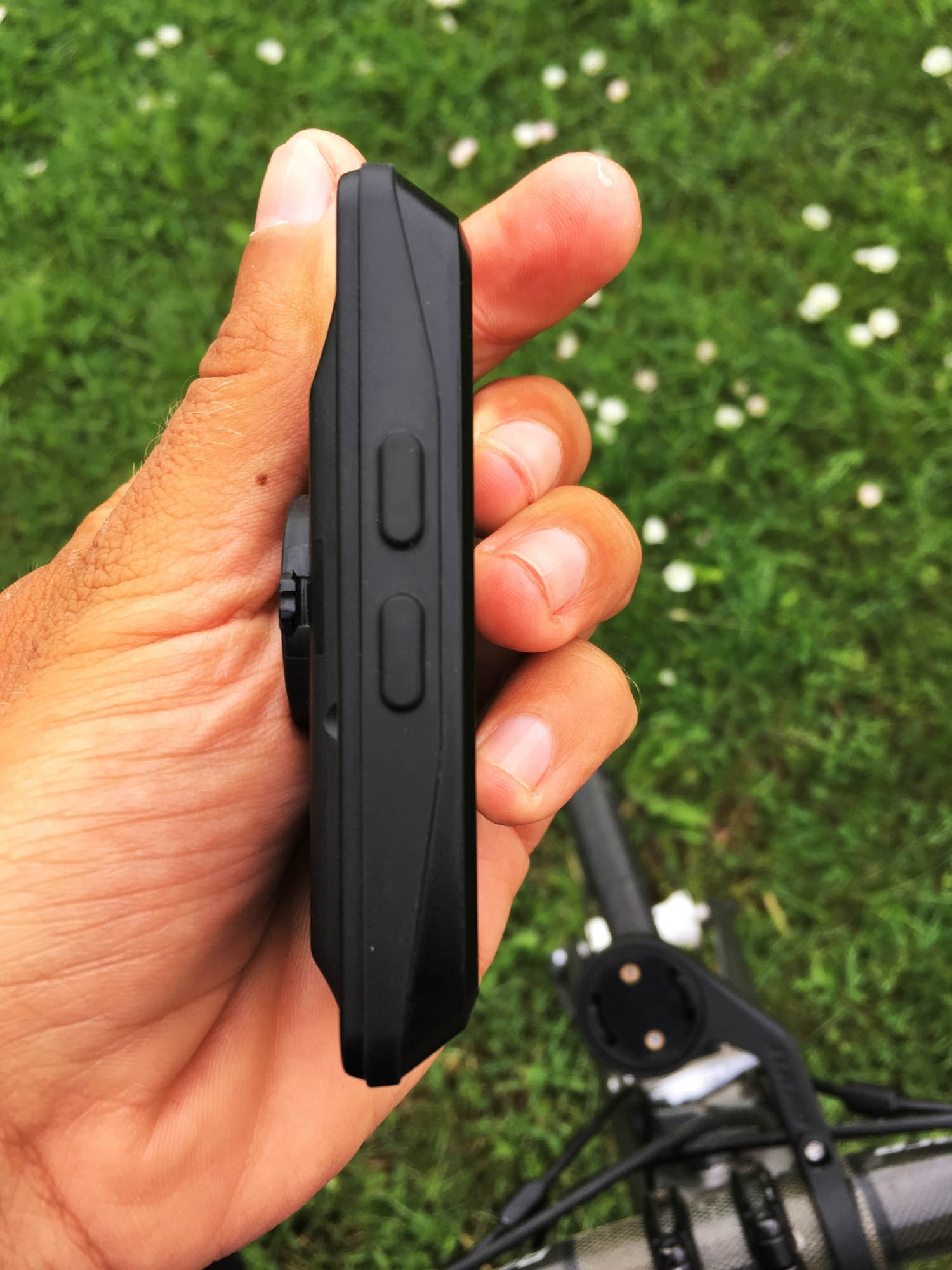 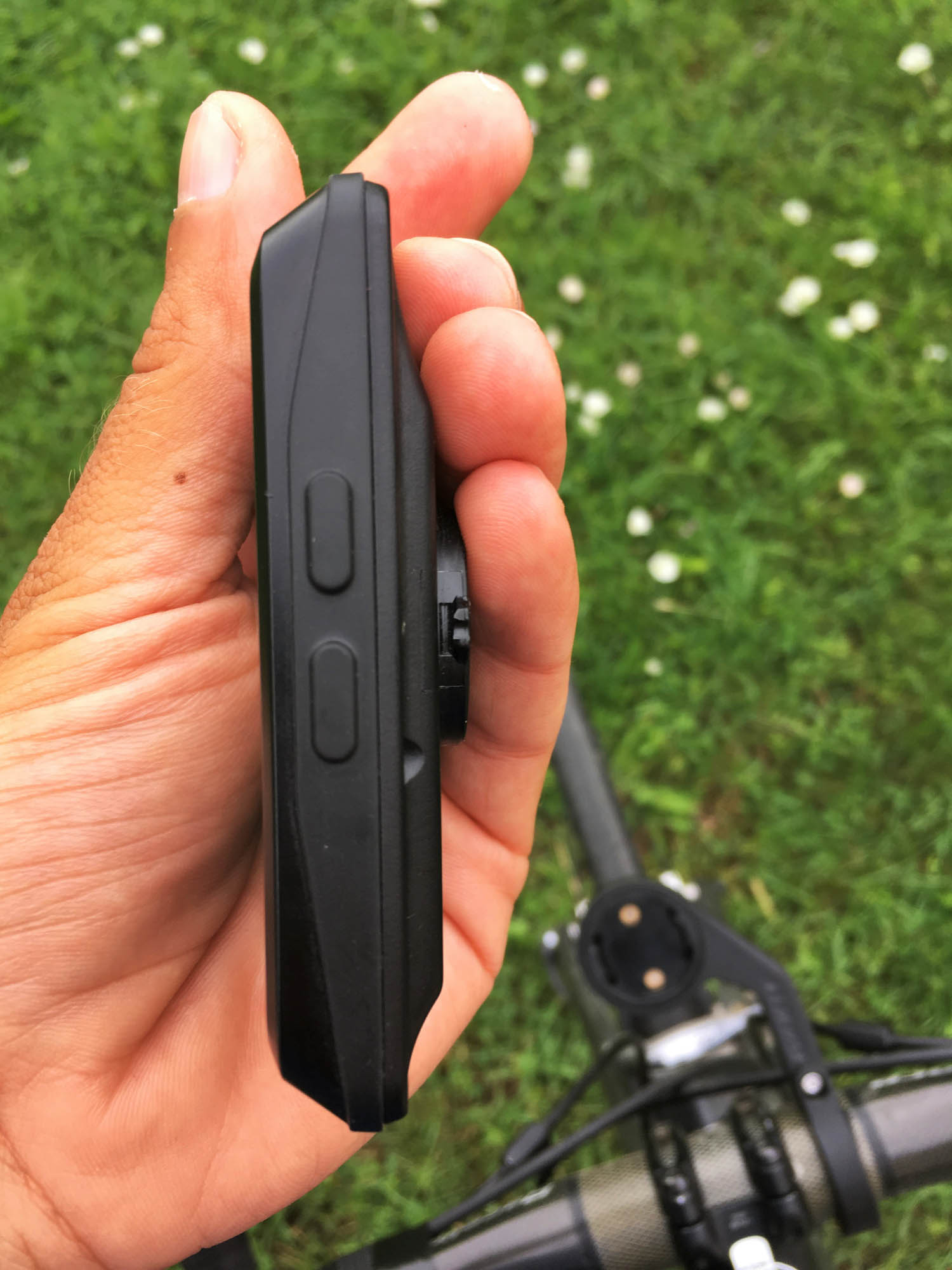 Let’s see what the Giant NeosTrack can do for the rider! I could go on with this list for a while – probably too long for most readers – so here I’ll only mention the most important ones, Be warned: even the shortlist is quite lengthy! The rest of the functions can be found on the Giant website. 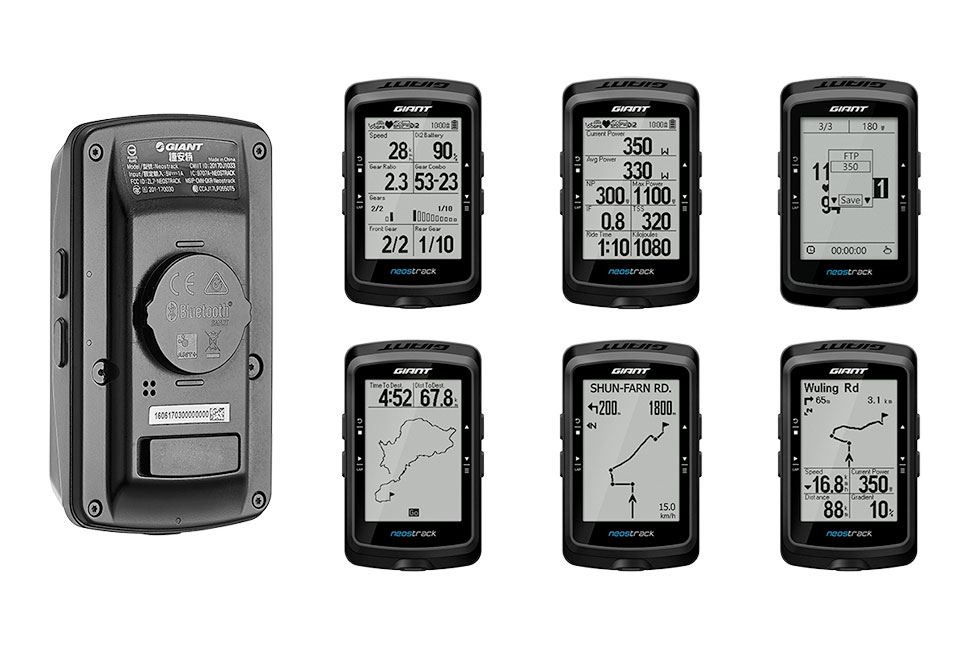 First of all, the Giant NeosTrack is ANT+ compatible, so you can use it with any ANT + heart rate transmitter, speed or cadence sensor, power meter, and it will record your data along with the route coordinates. Team Sunweb’s influence can certainly be felt when looking at some of the other features. There is a display function for virtually all performance related data (NP, IF, TSS), which are all essential information for professional training and analysis. Plus there is a built-in FTP and MAP performance test, and there is no need to upload this data to the Internet, you can scroll through them on the device. You would certainly not find these functions in the NeosTrack’s predecessor, or on any other device in this price range!

The 2.6″display can be used to track 10 different data types on each page, and there are no less than 6 pages. Hence there are 60 different data fields, but I doubt if any cyclist can absorb such a vast collection numerical information. And of course all data fields can be fully personalized, so the rider can decide which part of the display he or she wants to see, and in which combination and order. Naturally there is also back lighting built into the NeosTrack, which can be used in a variety of ways, there is even as “auto” mode which automatically switches on the back light from sunset to sunrise. The battery can power the unit for 33 hours according to the manufacturers information, which is nearly twice what the most popular competitor’s GPS unit offers. So the NeosTrack is not the type of device that needs a daily attention, although it can easily be charged with a micro-USB cable for your computer. The NeosTrack shows the altitude from both the GPS information and using a built-in precision barometer. This is quite important, since both methods of measurement are prone to error, and only the combination of the two guarantees the most accurate data. The unit has IPX7 class water protection, so it will likely survive a thunderstorm like the one at the Szilvásvárad Marathon last year 😉 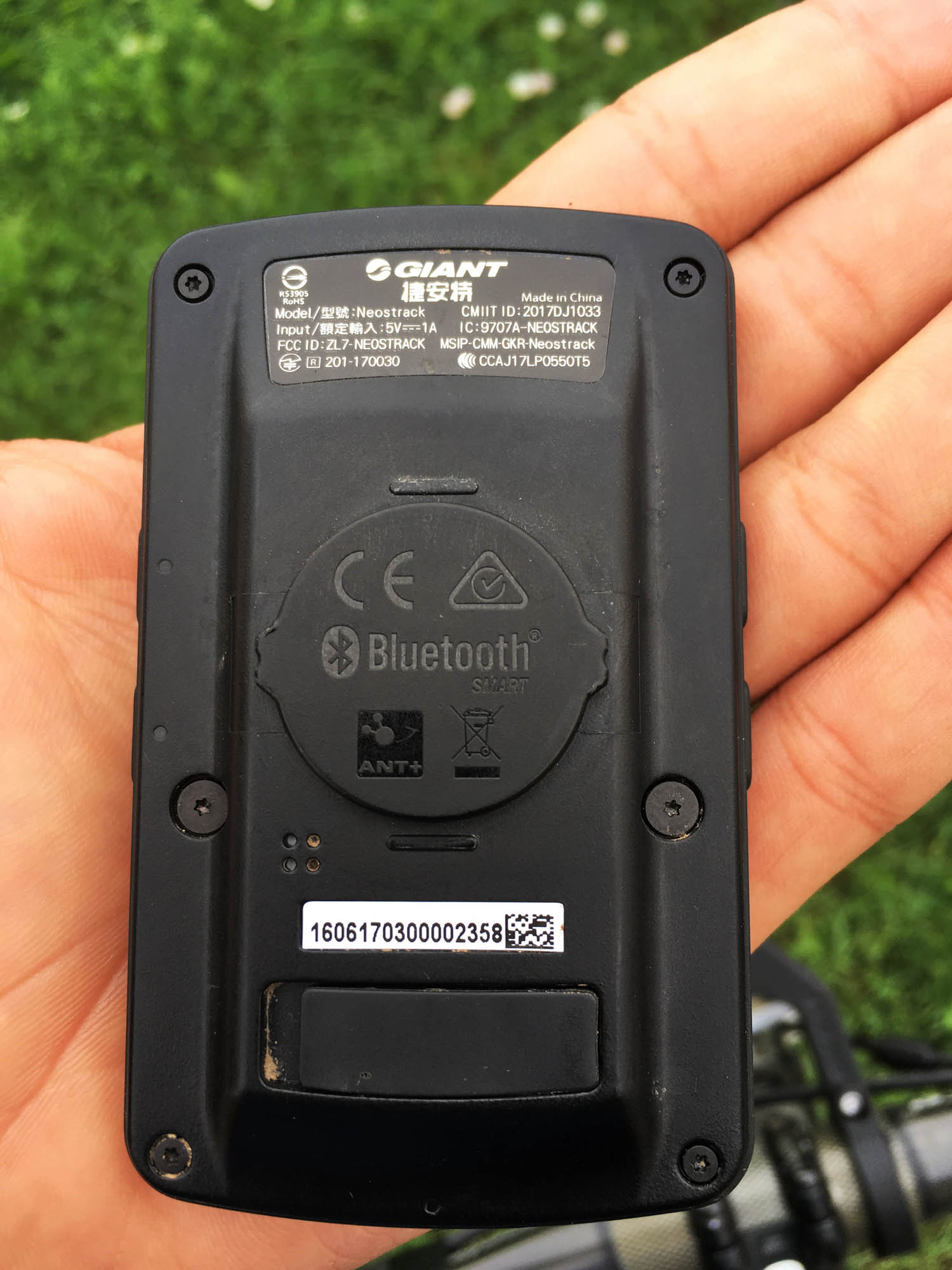 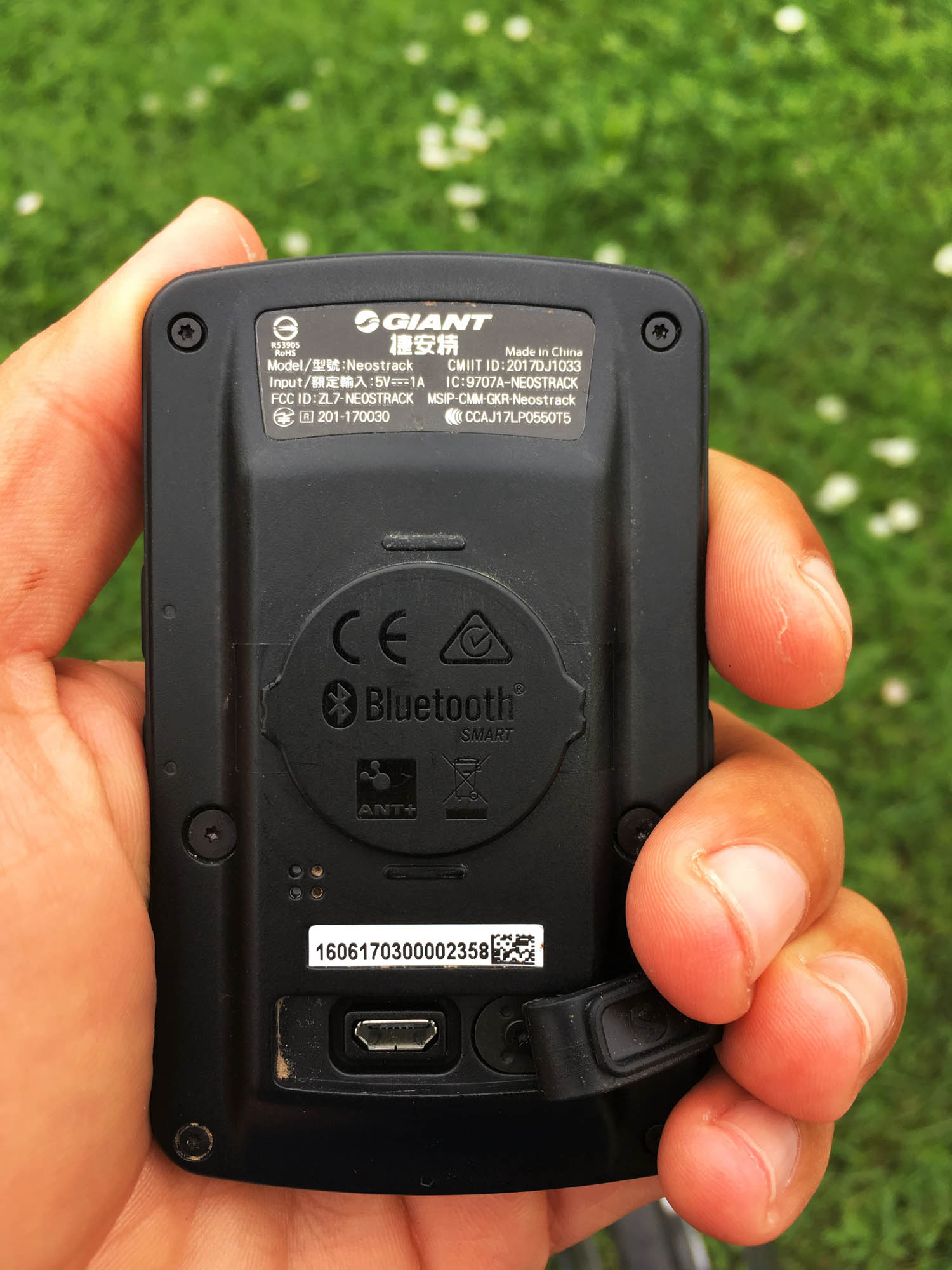 Beside the already mentioned ANT+ protocol, the Giant NeosTrack can send and receive data via Bluetooth and Wi-Fi. The data can be down loaded to the NeosTrack server as well. To do so, we need a NeosTrack registration and the related software application, then the unit can communicate with either the phone on the computer. The application is important as you can design a route and set up automatic Strava and Trainingpeaks synchronization. In addition to Strava and Trainingpeaks, NeosTrack uses its own website to analyze the workouts. It’s possible to transfer data without the application, since you can manually connect the unit to your computer via cable.

NeosTrack also has navigation features, hence we can plan the route using a phone application or with the web site found here. Both have virtually the identical user interface, and the designed route navigation can be sent to the unit via Bluetooth or Wi-Fi. In addition to this, GPX files can be uploaded, but in this case Giant does not guarantee 100% functionality. 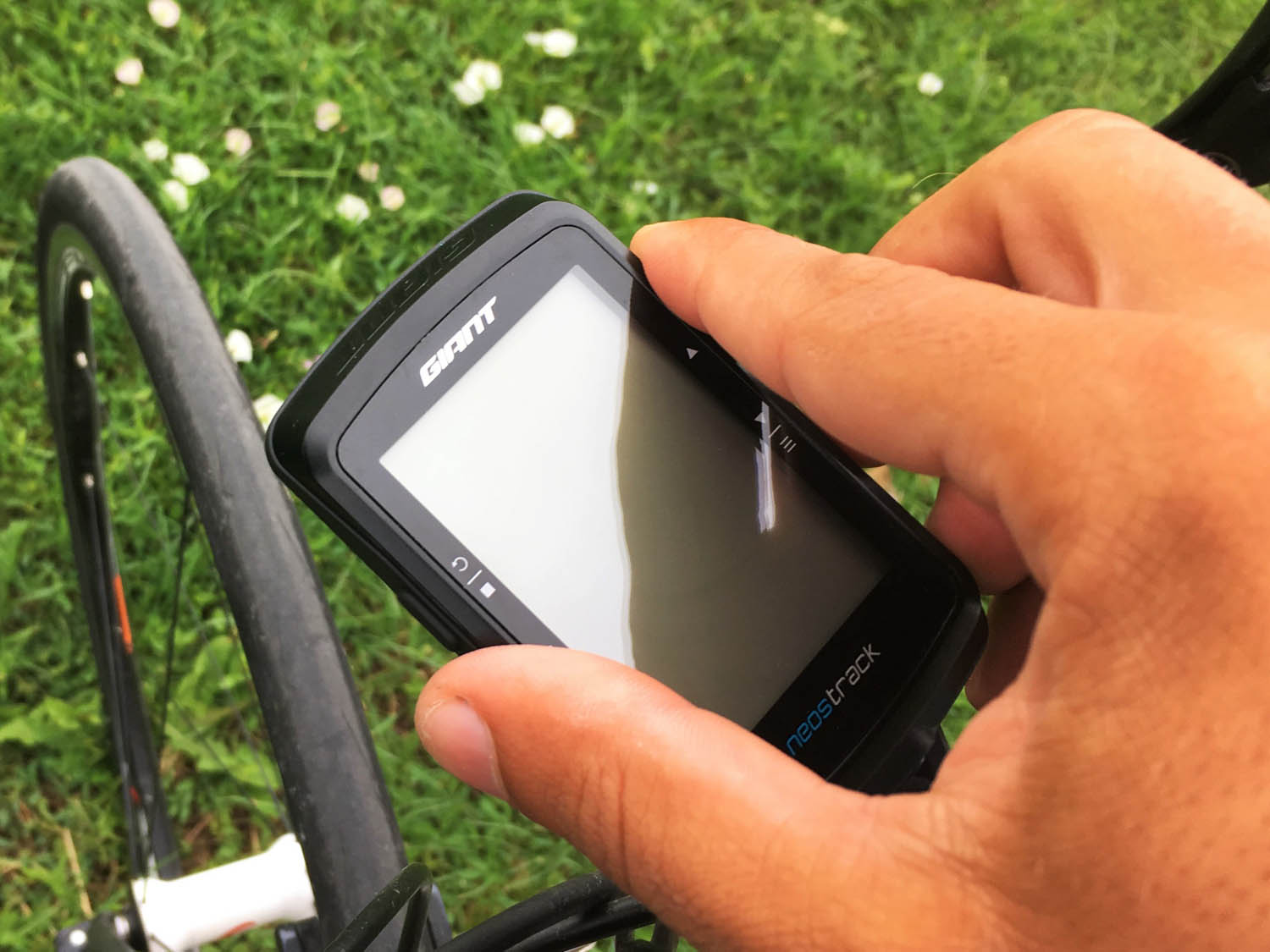 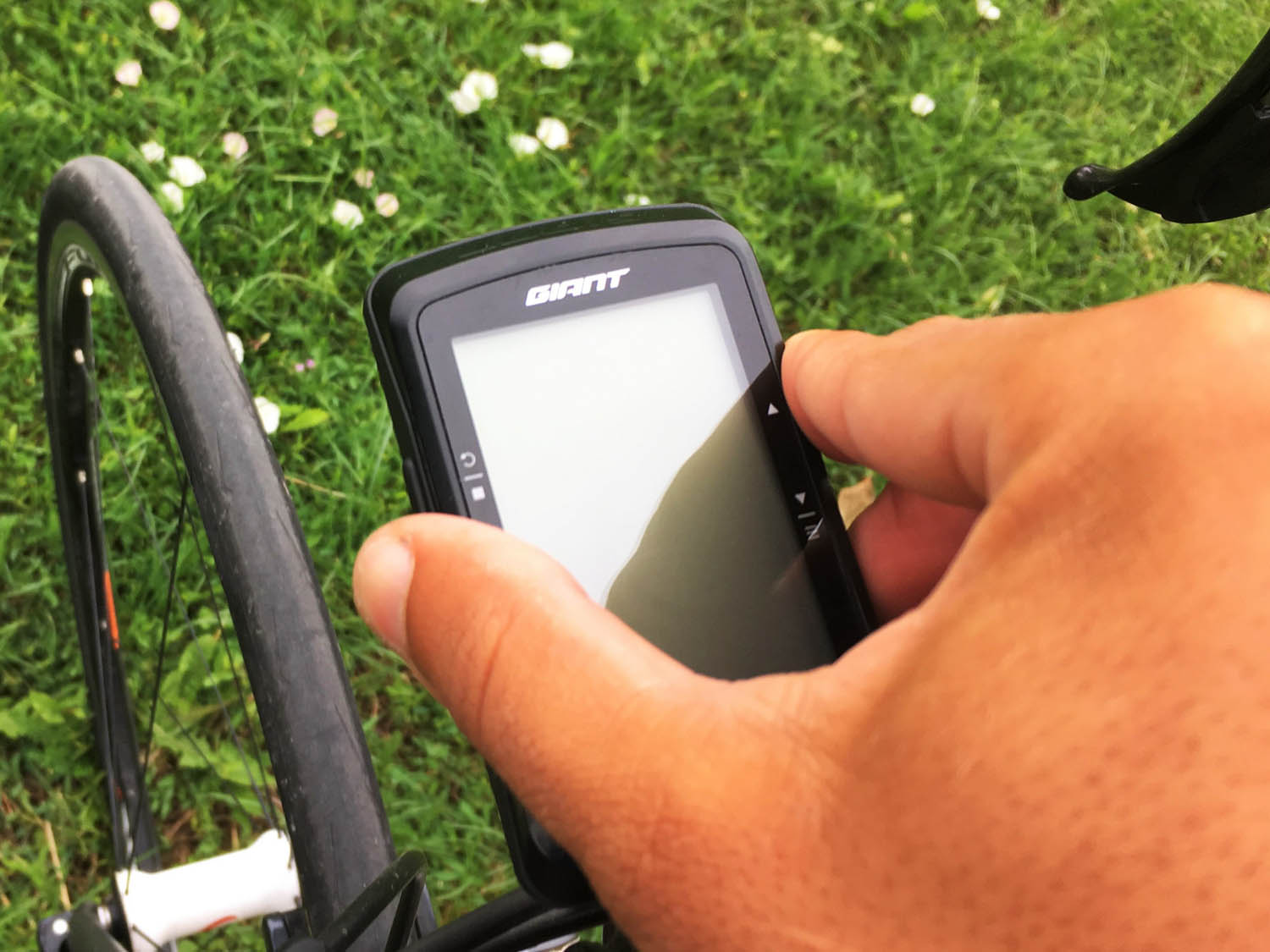 Users of electric shifting systems will be happy to learn that the Giant NeosTrack is fully Di2 compatible, it can show you which gear combination the rider is using and how much battery power is left in the battery. The computer comes with two types of console: one is the popular front-mounted mount attached to the handlebar, the other for the stem. NeosTrack can be attached or removed easily from the consoles by rotating just one eighth turn. 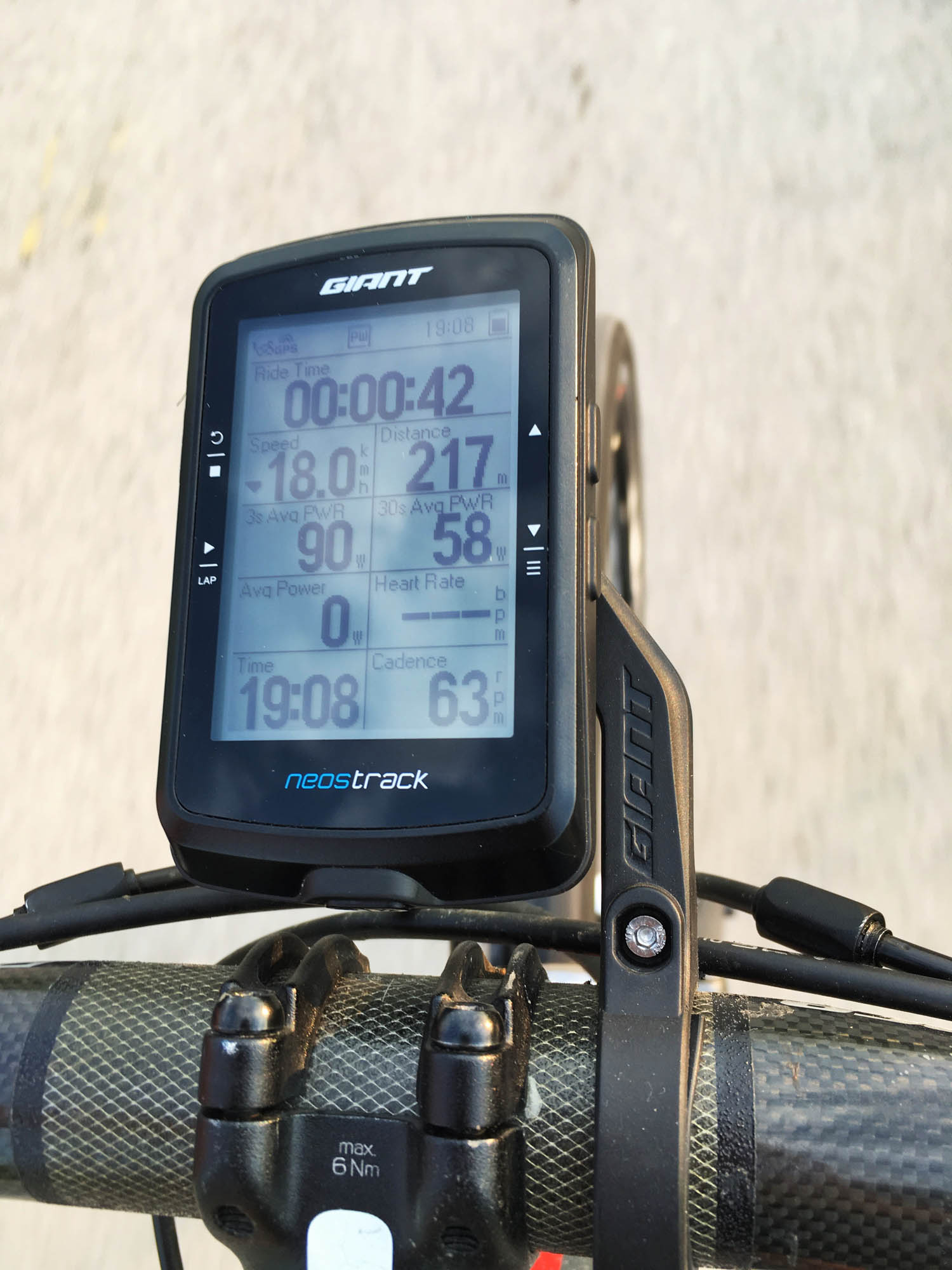 Let’s see how the NeosTrack performs while riding! The package includes all tools and accessories for mounting the unit, and there is a micro-USB cable for charging. NeosTrack has a good feel to it, the body received a rubberized coating all around, and although the edges are rounded, my hands didn’t slip when for mounting. Pressing the buttons has a positive action. It needs some force, and you certainly know they have been activated. The display produces some glare, so I would definitely apply kind of some anti-scratch and anti-glare foil. Downloading the app to my phone went simply, but pairing the unit with my computer failed the first time since it had already been paired with the profile of the previous reviewer. Two profiles cannot be used at the same time with the same device. Giant’s support service was able to sort out my problem: my email was answered swiftly and I could access all NeosTrack features via computer. I used the out-front handlebar console with the NeosTrack, which makes it very easy to mount the computer. I particularly like two things about this arrangement: on one hand I could position the unit exactly in the center line in front of the stem, moreover the console is positioned vertically below the handlebar axis, so when the unit is mounted, it does exceed the top of the bar, it remains on the same level, thereby improving aerodynamics and aesthetics. I also tried the stem-mounted console, but I since have a 105mm long stem with a 8mm spacer over it, the NeosTrack barely fits. If you have a short stem with spacers at the top, you are likely to be out of luck. 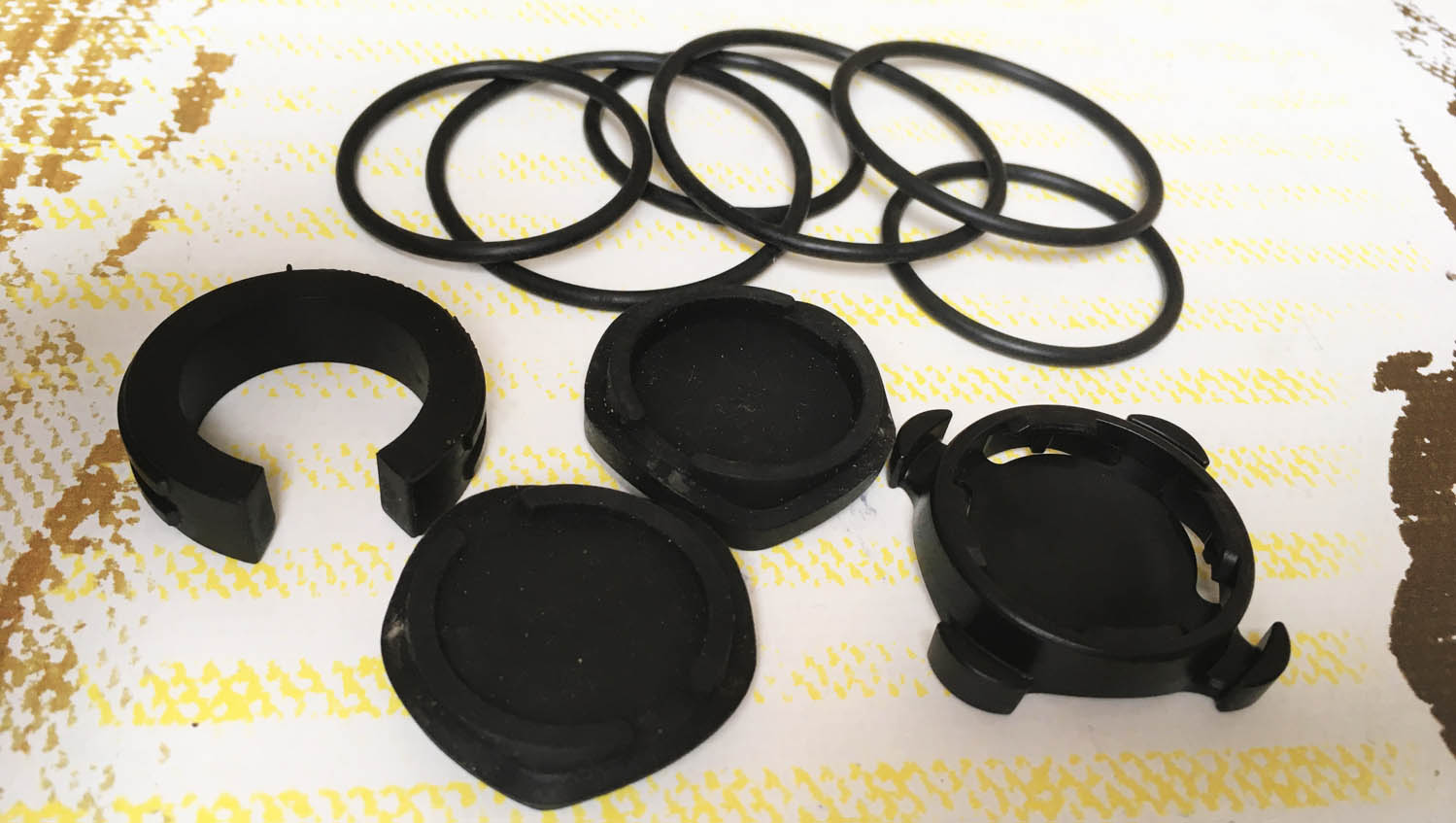 There are 5 buttons on the NeosTrack, two on the left and right side, and one on the bottom of the unit to activate and deactivate the device, and switch on the back light. Since each button has its own function, it is straight forward which button does what, so you can begin exploring the NeosTrack without referring to the user guide. When configuring data fields, it certainly helps that the different types of data are organized into sub-groups, an indispensable aid when there are so many features available. Pairing the unit with my power meter and heart rate monitor took only seconds, these were immediately recognized by the NeosTrack. 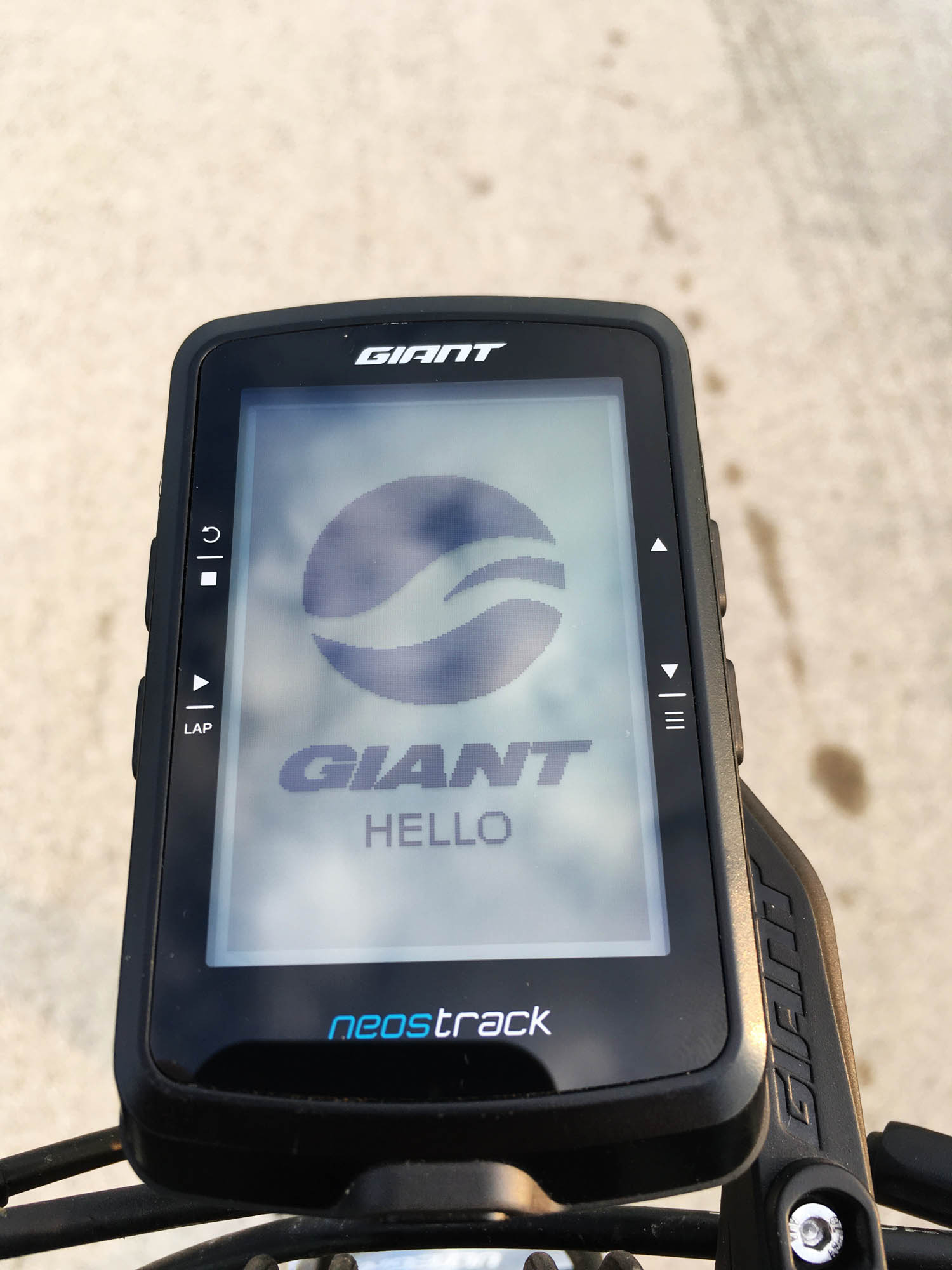 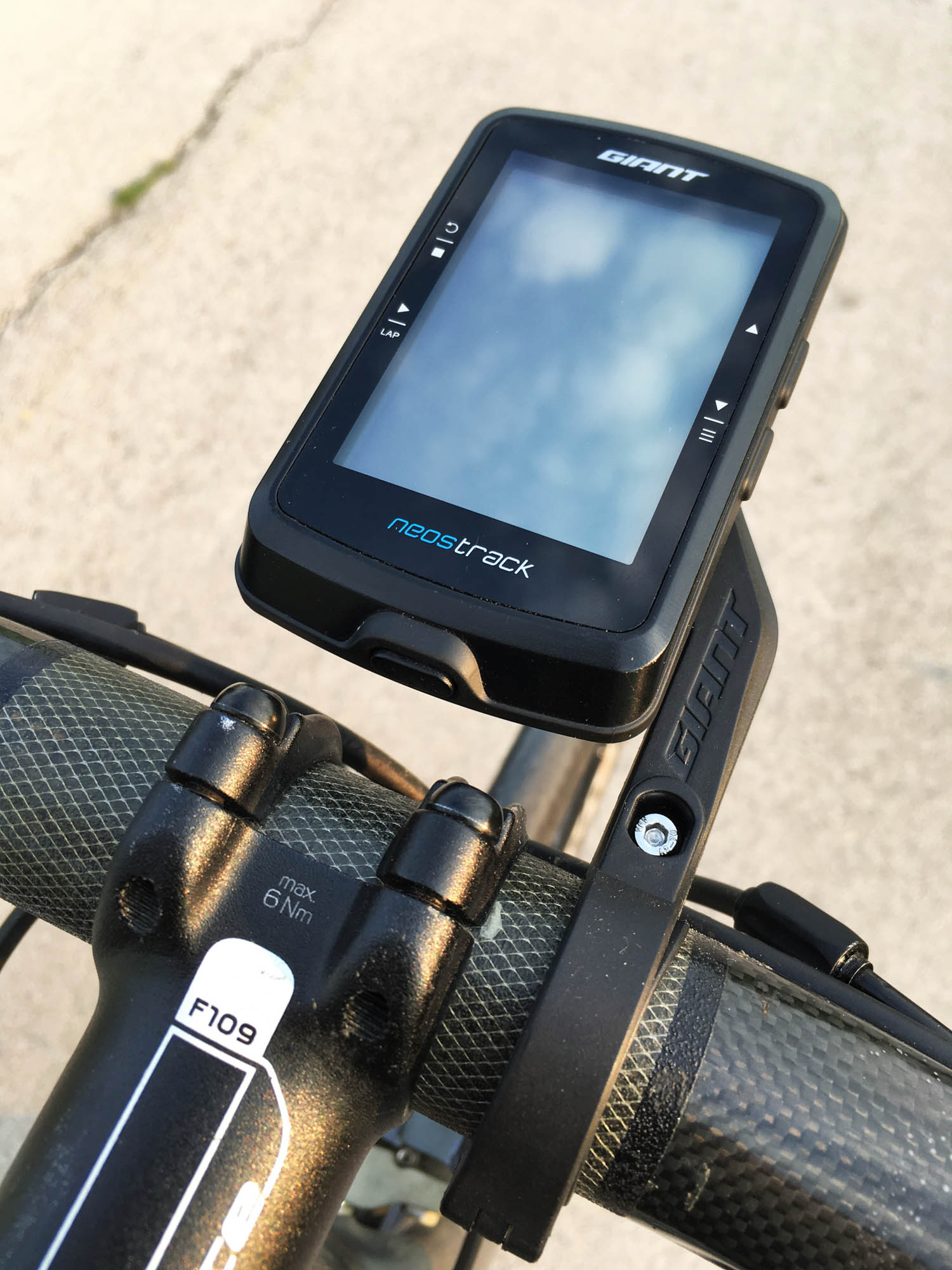 Satellite search was also relatively fast, even at my first attempt. The NeosTrack generally found the signal within a minute while rolling in cloudy weather. As with any GPS device, there was an occasional signal loss when moving about, so if you need to keep track of your exact traveling speed on a continuous basis, you need to use a speed sensor paired to the NeosTrack. The biggest drawback concerning this device is the amount of glare reflected by the display: I can see the mirror image of trees and clouds, but fortunately this problem can easily be remedied with a layer of anti-glare foil which also serves to protect the display from scratching. 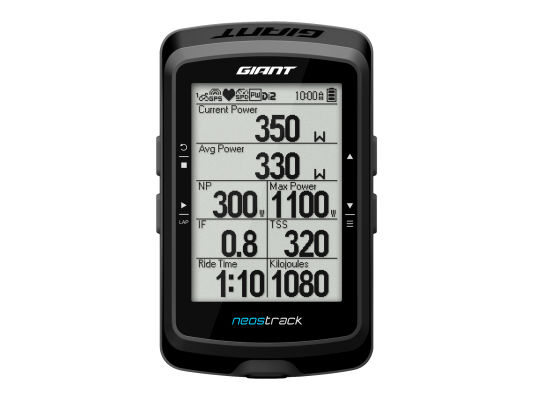 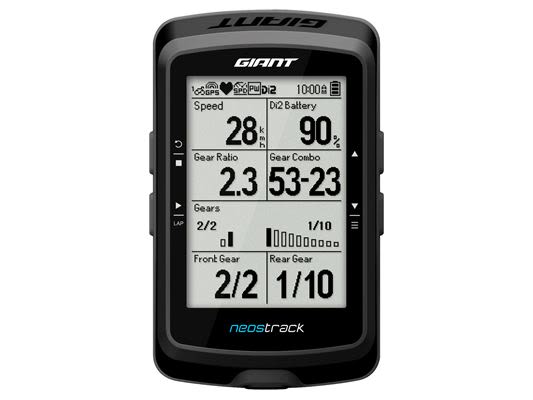 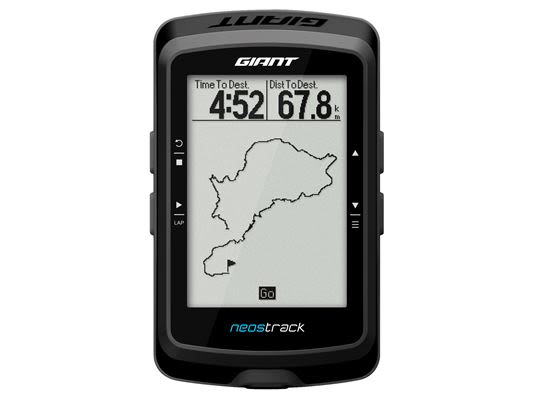 Another disappointment for me was not actually the NeosTrack’s shortcoming, but my own. I was simply unable to make use of the incredible amount of training functions and available data. I’m a “numbers guy”, still it seems that some of these functions have been developed for professionals, where the information collected by the device is handled by the coach, who carries out the scientific analysis. Nevertheless, there might be be some enthusiast amateurs out there who can make use of all these data.

It is possible to upload the training data to the phone via Blutooth and directly through Wi-Fi. I recommend the latter (even using telephone hotspots) since it’s much faster. There is a little room for improvement on the software in this respect: after I upload my workout on Wi-Fi and synchronize via Bluetooth, it will reload the workout, so there will be an unnecessary duplication of files. It’s strange that the software can not “see” that the training in question has already been uploaded via Wi-Fi. And speaking for myself, I have no need for the training analytics site of of the NeosTrack, as I’m a Strava and Trainingpeaks user.

I could not fully exploit the navigation function in Hungary, but when we traveled to Ljubljana, I received a lot of help from the NeosTrack. We did not have to stop at each intersection to check the phone, based on the file we uploaded previously at our accommodation, the unit’s GPS navigation faultlessly sailed us through the city and the countryside. It would have been great to have this device with me during the training camp in February, avoiding the many navigational difficulties I experienced. 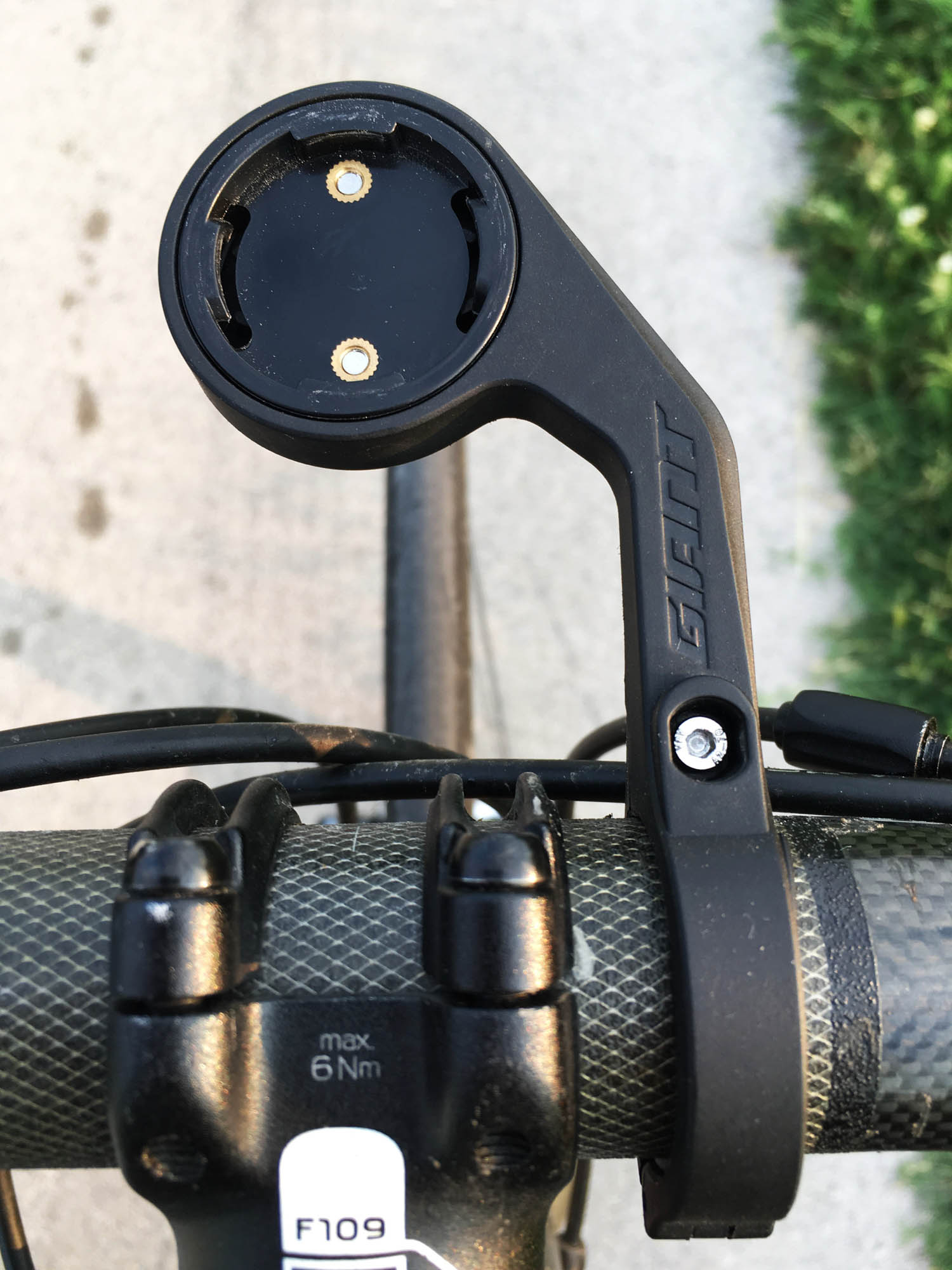 All in all, the Giant NeosTrack represents a really good value, other than its “close relative”, it has essentially no serious competitors on the market. It offers dozens of advanced training functions at a moderate price and even features advanced GPS navigation. And let’s not forget about design, the stylish, professional look is clearly worthy of the Giant brand name. It deserves my highest recommendation.