A Road Cycling Marathon not to be Missed! – Maraton Franja BTC City

It is difficult to recollect the experience we had at the Maraton Franja BTC City, a perfectly organized race with an impeccable course located in Slovenia, where cycling is one of the most popular sport activities.

This spring we wrote about the biggest road cycling marathon of our southern neighbor, which is part of the UCI Granfondo series. In June we visited a three-day event in order to experience the celebration of cycling in Slovenia’s capital, Ljubljana. 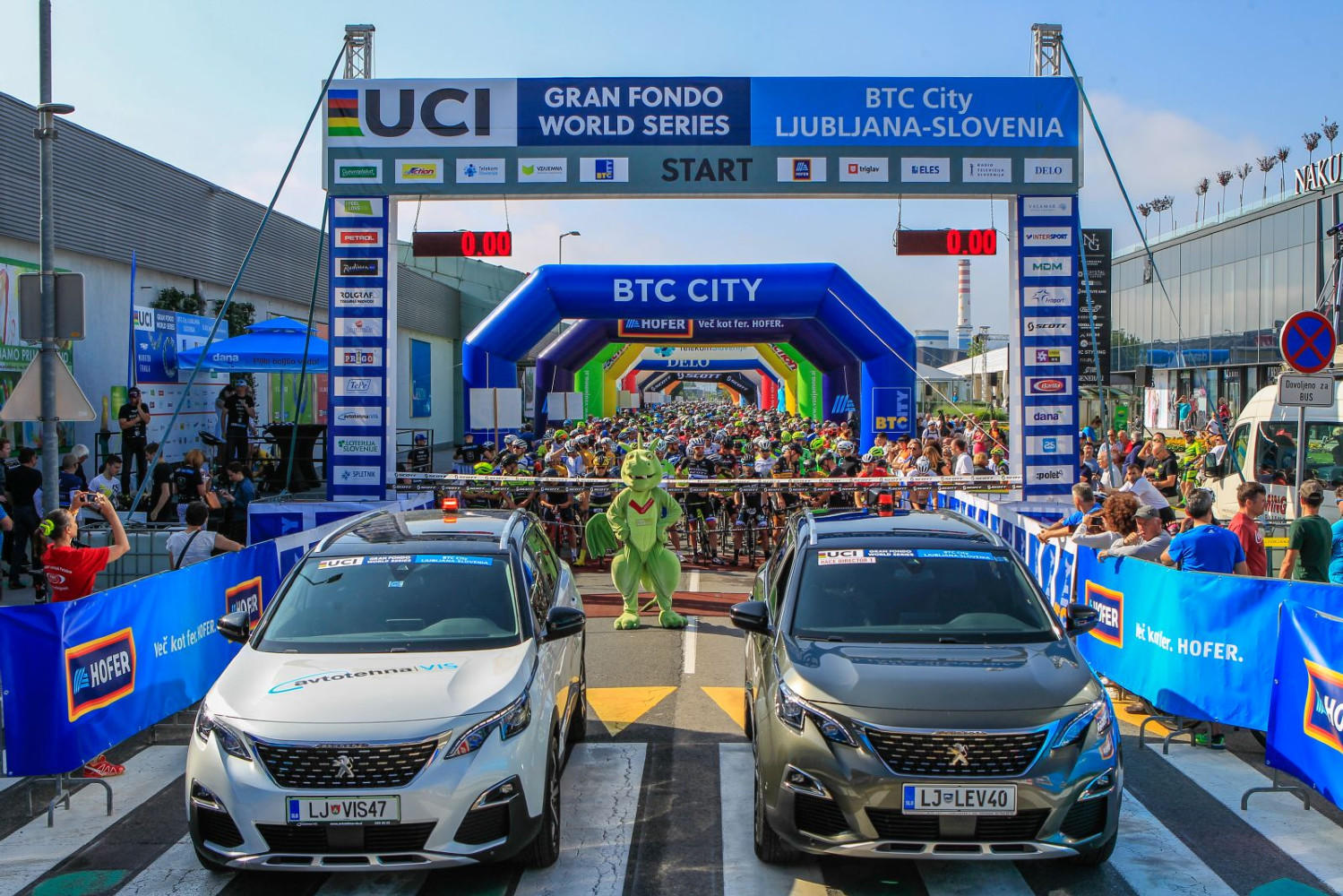 We were planned to take part in the time trial event as well, so we arrived in Ljubljana early Friday afternoon. Surprisingly, even though there was a road construction on the Slovenian-Hungarian border, the journey took only 4 hours from Székesfehérvár. After checking into our accommodation, we hurried to to the start area called the BTC City. Unfortunately an unexpected event halted us, so for 2 hours the road complete was closed both ways. We had no choice but to reach the start-up center by taking a complete tour of the capital. On arrival, we quickly realized that we came to visit a full professional race, not a low-key amateur event! It is no accident that the Maraton Franja BTC City has a UCI classification, serving as the Slovenian national cycling championship as well as an amateur race — taking place at the same time and location. Another lesson we learned the hard way: the next time we visit such a prestigious event, we should approach the start gate from behind!

Unfortunately the time trial plan had to be abandoned since our team member’s shift lever broke during warm-up, so we cannot tell you what the race was like from the participants’ perspective. Although it is worth mentioning that a serious thunderstorm accompanied the time trial race, and many competitors fell in the corners — just like at the prologue of Tour de Hongrie! Let’s just say that it was the fate that our compatriot, Niké, had to miss the calamities, the a “minor” technical problem actually came to his rescue! Otherwise there were two Hungarian starters at the race against the clock: Móni Király took part in the UCI classified event, while Szilvia Ányos was on the podium for the amateur women.

On Saturday, instead of watching the children’s competitions, we went on a sightseeing tour, more precisely we pre-rode part of the marathon event course which took place on Sunday. Ljubljana and its surroundings certainly make a breathtaking cycling location, and though the mountains are not very high in altitude, the landscape clearly resembles the Alps, with pastures, cows and the pleasant scent we associate with such an environment. By the way, the car drivers are very friendly, no one wanted to get in our way or pass us with force, they definitely looked after the well-being of all cyclist on the roads. Sometimes I actually felt uncomfortable keeping up traffic… 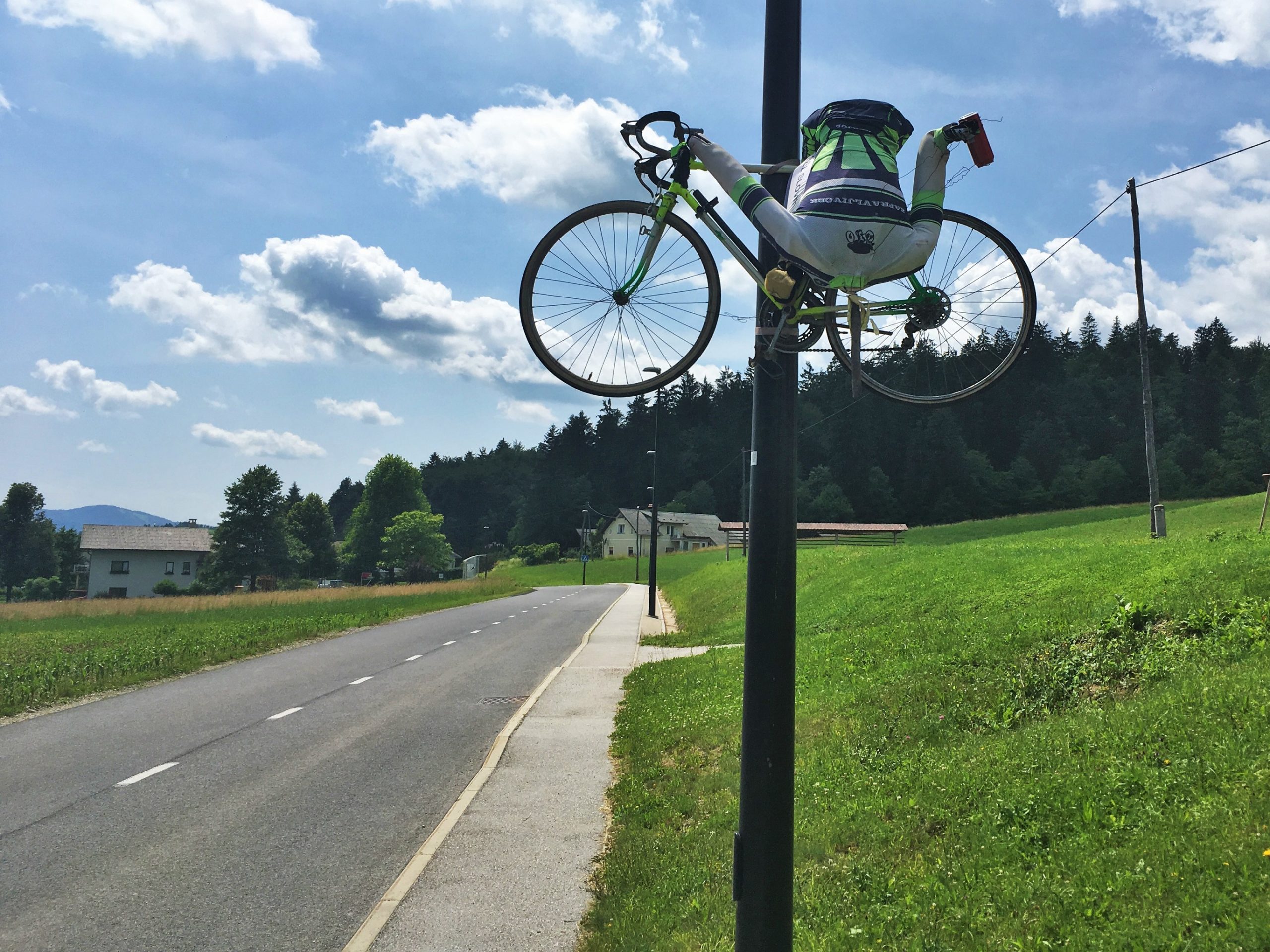 We do not know what this installation art meant to symbolize. It may be saying, that if we go too fast, we’ll get stuck to an electric pylon 🙂

For various health reasons, none of us were physically very fit on Sunday, but we had no intention of missing out on the much-anticipated Franja Maraton. Based on our previous experience of the traffic, we decided to leave a little earlier for the race. Who knows what kind of traffic we’ll encounter, where can we park the car… It turned out we needn’t have worried, we arrived swiftly, actually a good hour before the start of the 156 km race. Our 97 km event would set off 2 1/2 hours later. Plenty of parking space was available, since BTC City is an enormous shopping in the center of Ljubljana. It is closed on Sundays, so we had plenty of time on our hands to look around, and get ready for the ride. 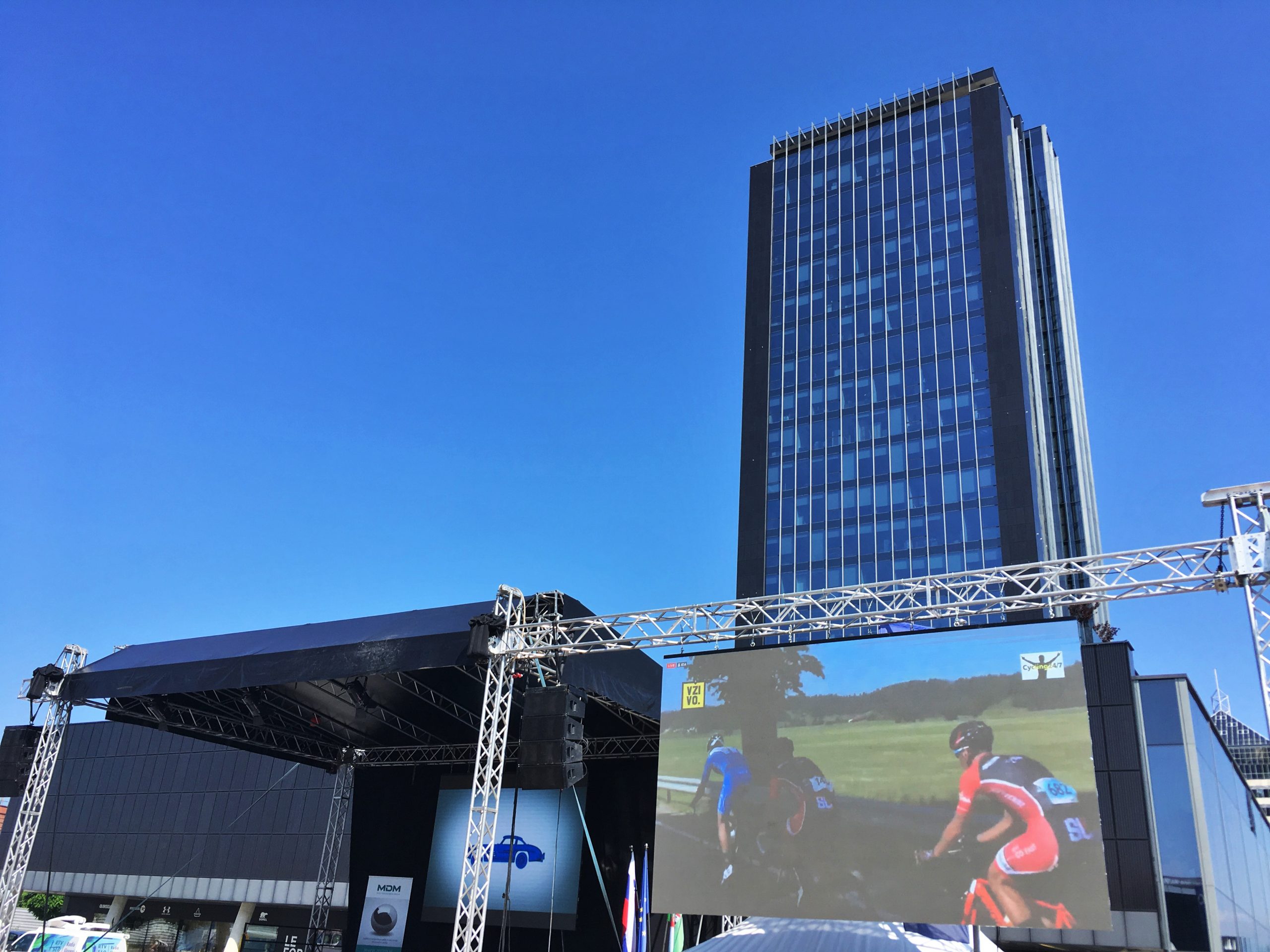 It was possible to follow the race route on this huge projector.

There are two things to highlight from this pre-start wondering. One, is that I have never seen so many policemen on motorbikes. The organizers made great effort to provide a high level of security for the event, but I would not have imagined that so many motorcycles were needed to achieve this goal. The other was the box starting system, which from our perspective (as bike racers and also event organizers) may seem excessive, but proved to be very effective for a such a large-scale event. At the Franja Maraton every competitor gets a ranking positions according to his or her previous results or status, and is allocated a box position in the start area. The positioning was perfectly enforced by the organizers, in addition to this, mountain or trekking bike riders had to start from the back to avoid dangerous takeovers at the mass start. 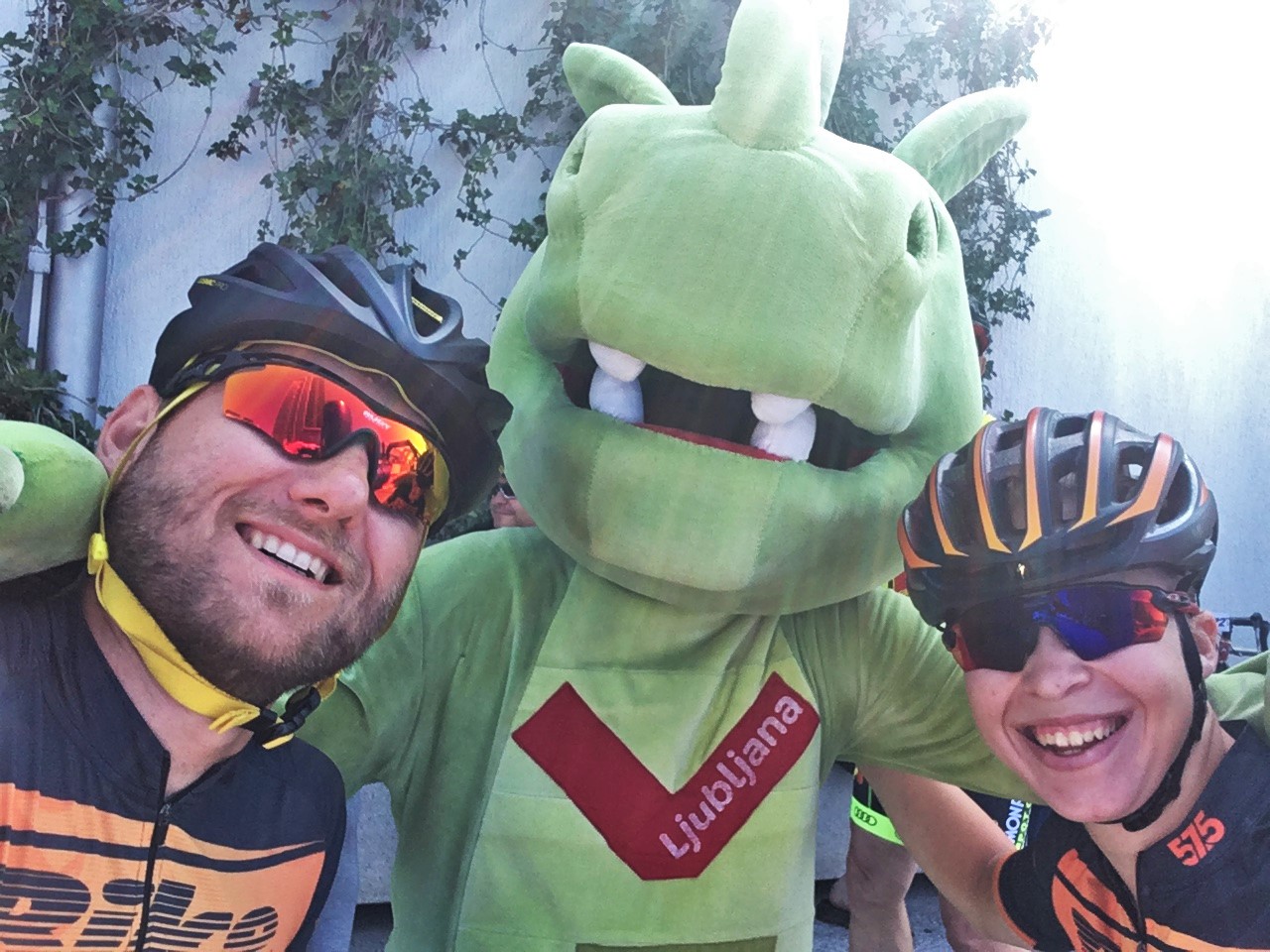 The dragon caught us for a photo 🙂

We were lucky to have been invited in a VIP start box, hence we did not have to scramble to our allocated position, and even had the opportunity to take photos with the event’s mascot just a few minutes before setting off. The start was worthy of such a large-scale event: there were speeches, sponsors being announced, and it clearly looked as a well-organized program. As the gun went off, the pack was already speeding away at over 40km/h, although it was only the “slow start”! It is evident that the Slovenian amateur bikes are quite powerful. The main road from the start location was completely closed off, and no car was in sight, not even by the roadside! (Furthermore, there was no vehicle on the road other than those belonging to the race organization while riding the event!) Once we safely left the Slovenian capital, it came to crunch time: the top riders began to dictate a tremendous pace all the way to the foot of the mountain in order to drop everybody off who was not strong enough. It became clear who were there win. Seeing this, we immediately switched to our own pace, and released the lead pack. Fortunately the main climb was not so steep that we were not fighting for our lives, and the crowds by the roadside, the cheering and the music at the summit will certainly stay in our memory forever. 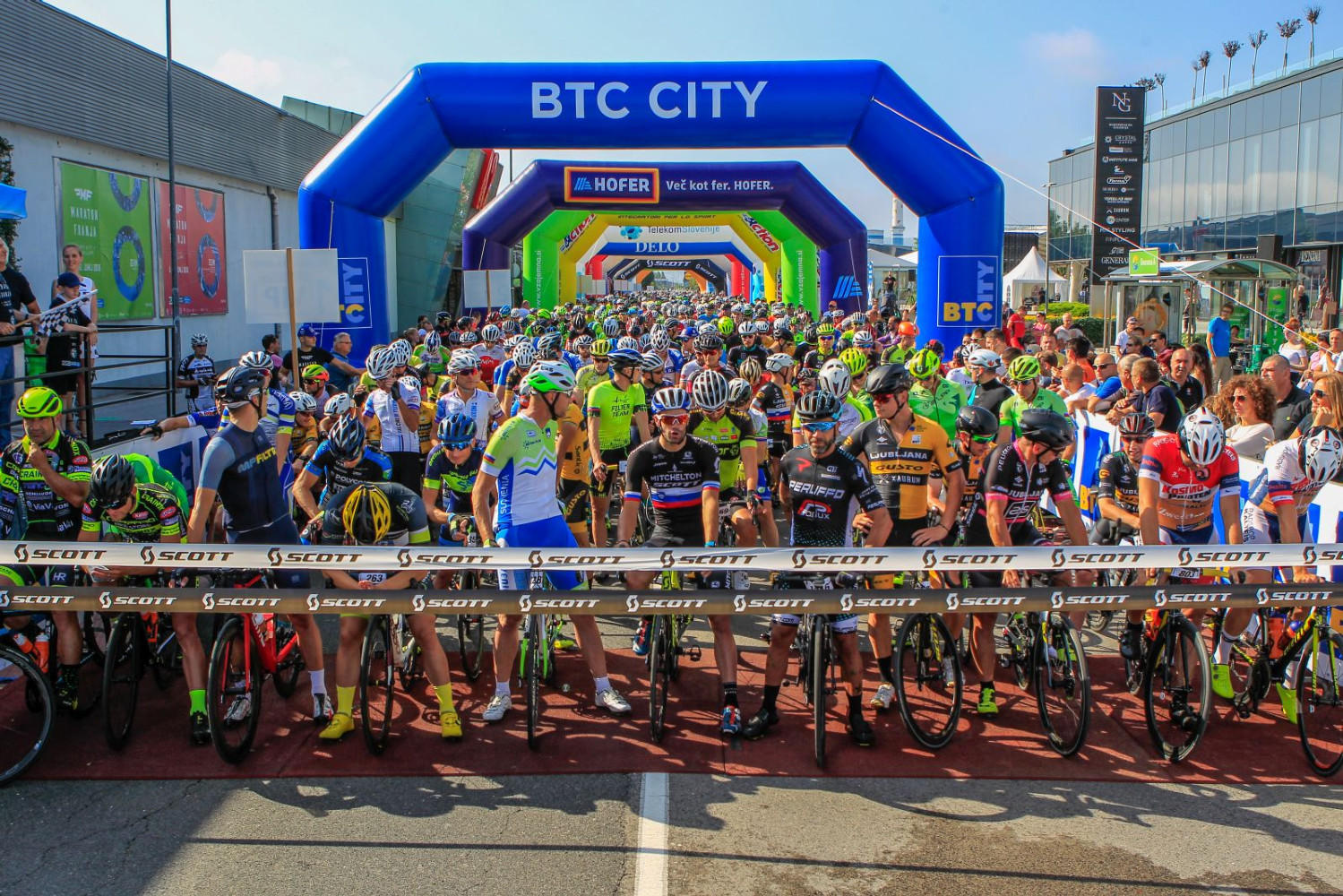 The downhill section after the summit was the only place where we had to ride on less perfect road surface. There were some cracks, but still way better than the typical Hungarian conditions. A funny situation happened when about 20 meter of road surface was milled for resurfacing in the valley, and one of the cyclist got off his bike to walk this section. As a rhetorical question came to my mind: what would he have done in one of our domestic competitions? He may have had to hike more than actually ride… 🙂

After a couple of miles on the flats, we swelled to a rather large group of riders, which was running at a pretty good average speed. Since there were no more major climbs to the finish line, it was basically a matter of steering in the bunch. The main advantage of these amateur marathons is that one rarely stays alone, there is always a group to join, where you can ride comfortably or show some competitive spirit. Even though we were behind the lead group by a considerable distance, the road were perfectly marshaled, and even small groups of riders got a motorcycle escort to assure safe riding. Now we started to comprehend why there were so many police motors at the start!

On our arrival in Ljubljana, once again car-free roads awaited us, and we could use the full width of the road, feeling as if I were taking part in one of the “grand tours” of professional racing. Although we were competing merely for the minor placings, the last mile of the event saw some real competition in our group. The pace increased, and we I loved the way we speed through the roundabouts and the corners. I did not win the sprint, but this frenetic experience will be one to remember. 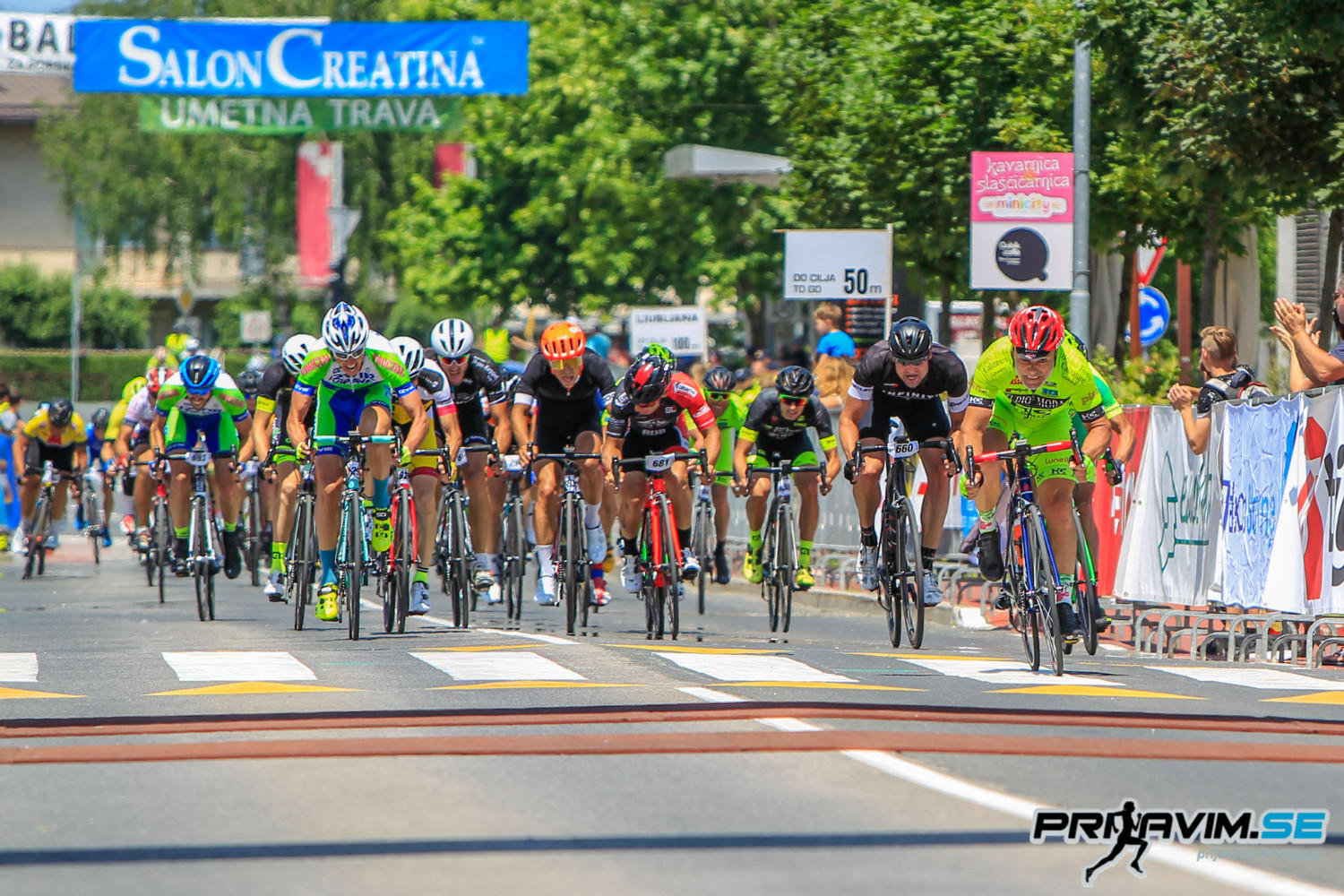 After crossing the finish line, we got our race medal (with UCI label!), and were offered drinks, yogurt, followed by a pasta party and everything that characterizes such events. The organizers were not afraid to show off their pride at the medal ceremonies: there was a giant stage behind the tent with mascot animals for children and a professional announcers to make the experience memorable for everyone. It was a part of the program from which riders did not want flea, they stayed instead of setting off right after the race… 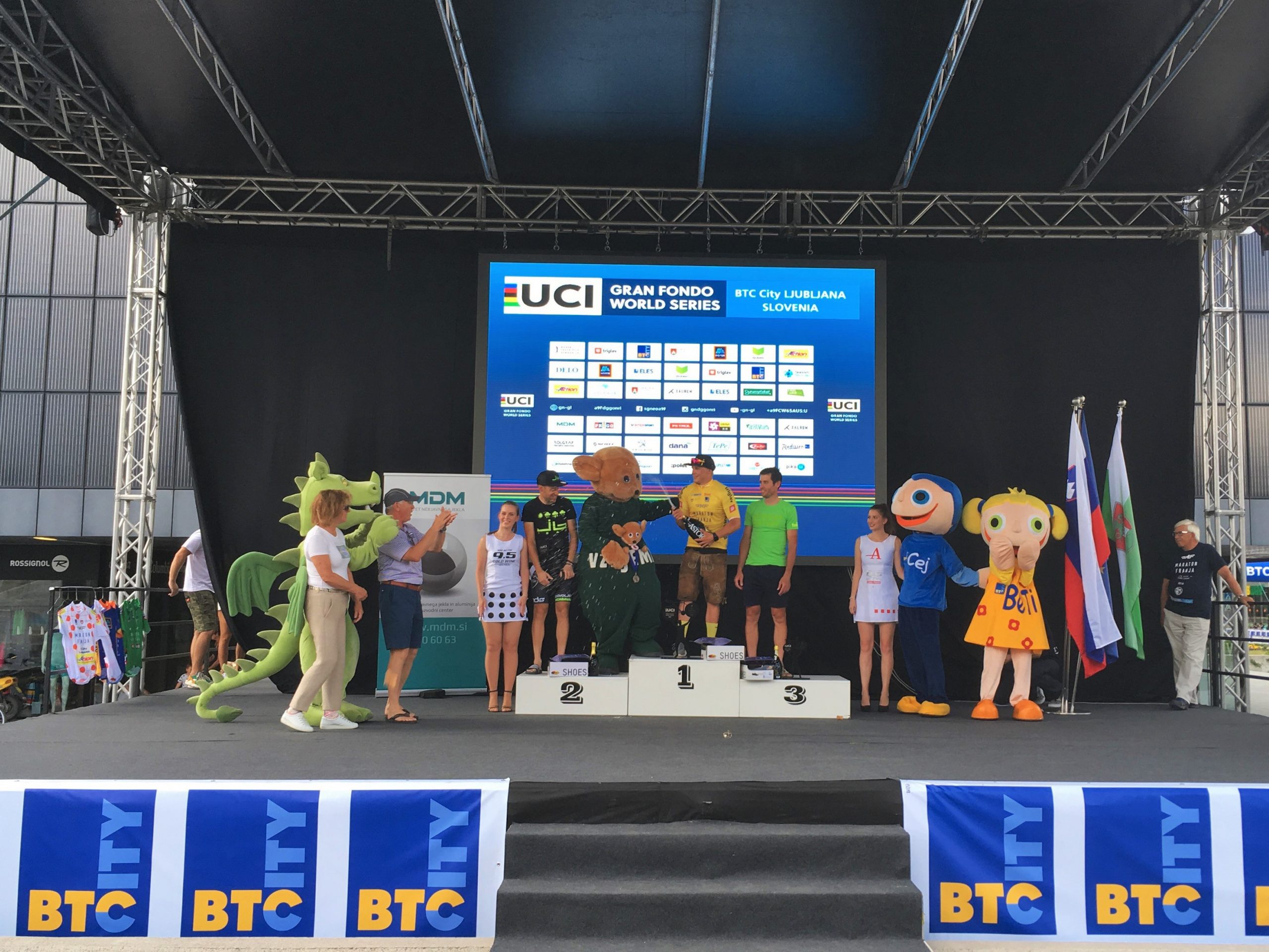 The winner celebrates with champagne 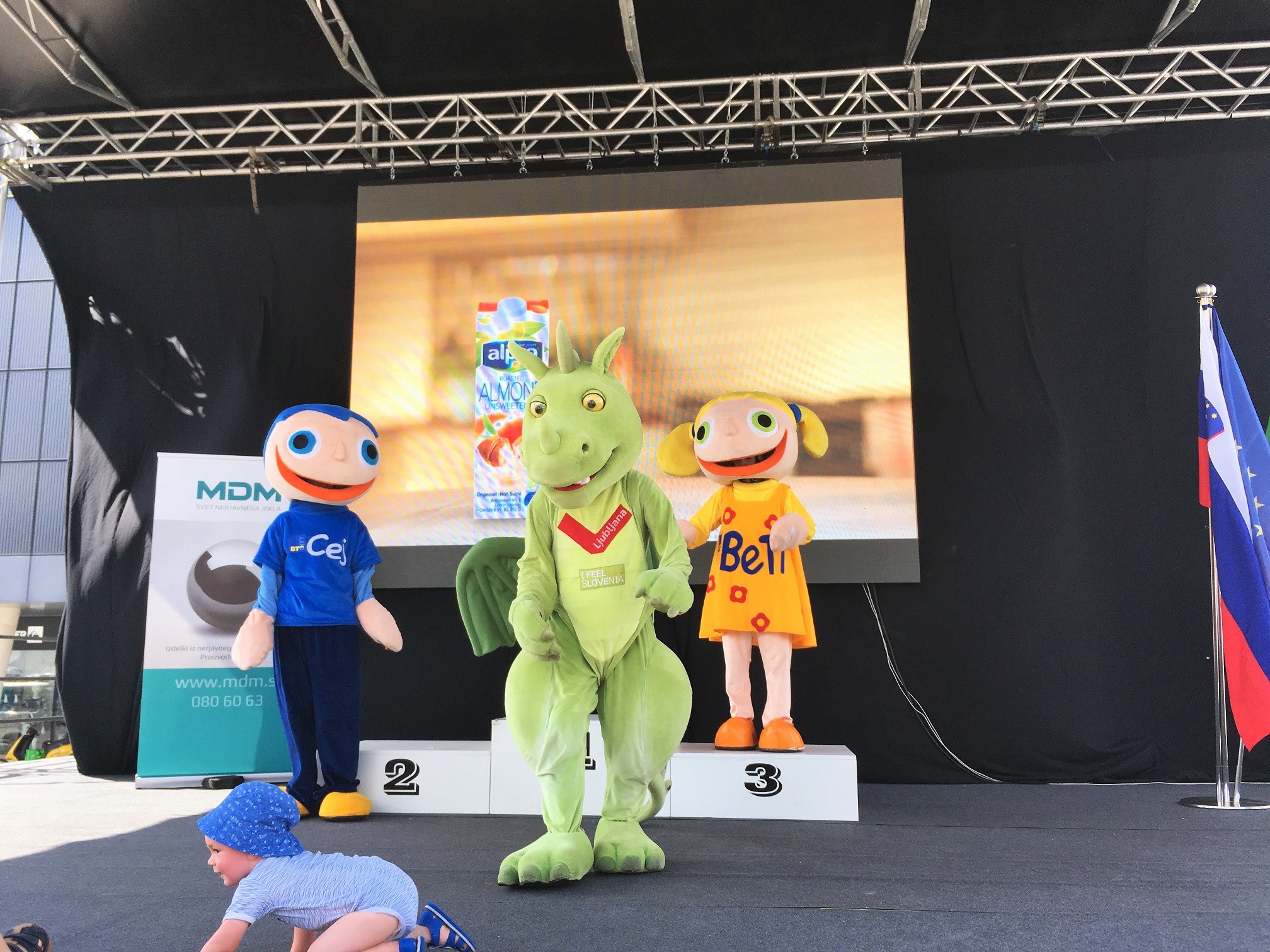 Kids enjoyed the show with the mascots

As it stands in the title, the Franja Maraton BTC City road marathon is one that should not be missed. It is incredibly well-organized (I have not seen traffic control so well organized at any of the Hungarian Circuit Competitions), and with the beautiful landscape Slovenia offers, their protective attitude towards bicycle riders, I guarantee to be an experience that all cyclist will cherish, so it should be everyone’s bucket list. One thing is sure, we’ll be back next year! 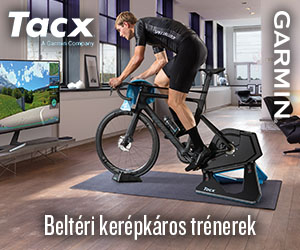