Merida eOne-Forty 5000 review: A wasp that takes you whithersoever!

This year not only saw the complete revamp of the Merida eOne-Sixty, but also its minor sibling, the eOne-Forty. All the technology employed for the flagship eMTB was transferred to this mid-travel eMTB, the added features and the innovative high-tech approach enabled the eOne-Forty to rise above the competition in this segment of the market. We were fortunate to get an invitation to the product launch of the 2020 Merida novelties, where an opportunity arose to take the new eOne-Forty 5000 for a proper ride on the trails around Ruhpolding, Germany. Spoiler alert: this eMTB certainly didn’t disappoint! 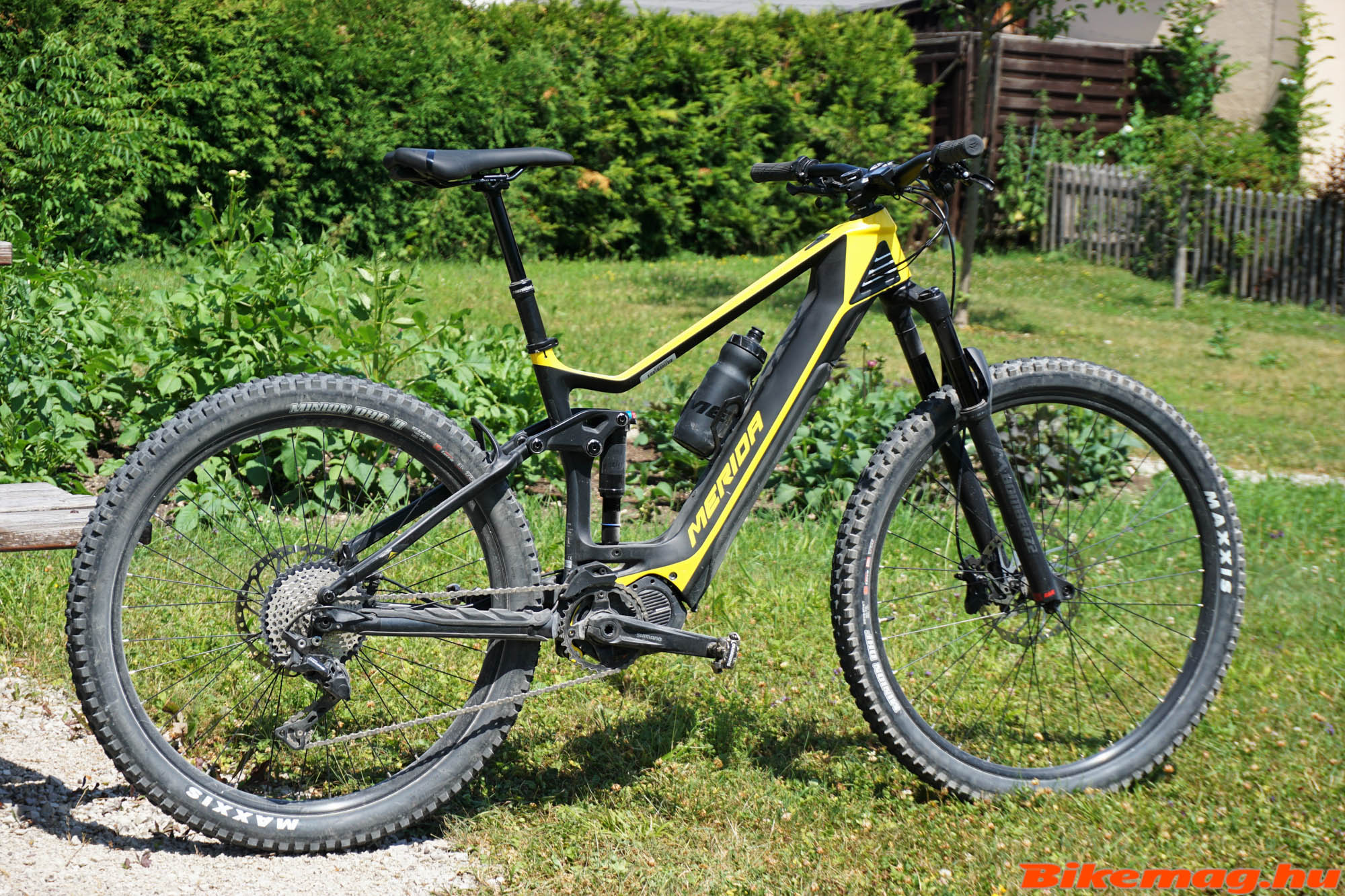 This May saw the launch of the Merida eOne-Sixty. There my colleague, Zsolt Pántya had the chance to ride the new flagship eMTB. In one of our conversations following the event Zsolt recollected all the advanced technologies Merida managed to pack into the model he rode. I was chap-fallen at what I have heard and became interested in the new Merida eMTB lineup. I didn’t have to wait long to get my turn at riding one of these advanced bikes, as the Merida eOne-Forty was launched shortly after the eOne-Sixty at the test camp in Ruhpolding. This mid-travel bike shares almost all the technology, the frame itself is in fact the same for both models, the only thing separating the two is the suspension technology.

These bikes are milestones for eMTB technology. Jürgen Falke’s fine team of engineers implemented industry-leading expertise with great attention to every detail. And it was not only us who were dazzled by what we saw, virtually all the cycling media agrees that few bikes come even close to what the new Merida eMTB lineup has to offer. This made me even more curious to try the bike this July in Ruhpolding. So on the arrival at the test camp I immediately booked the Merida eOne-Forty for a ride… 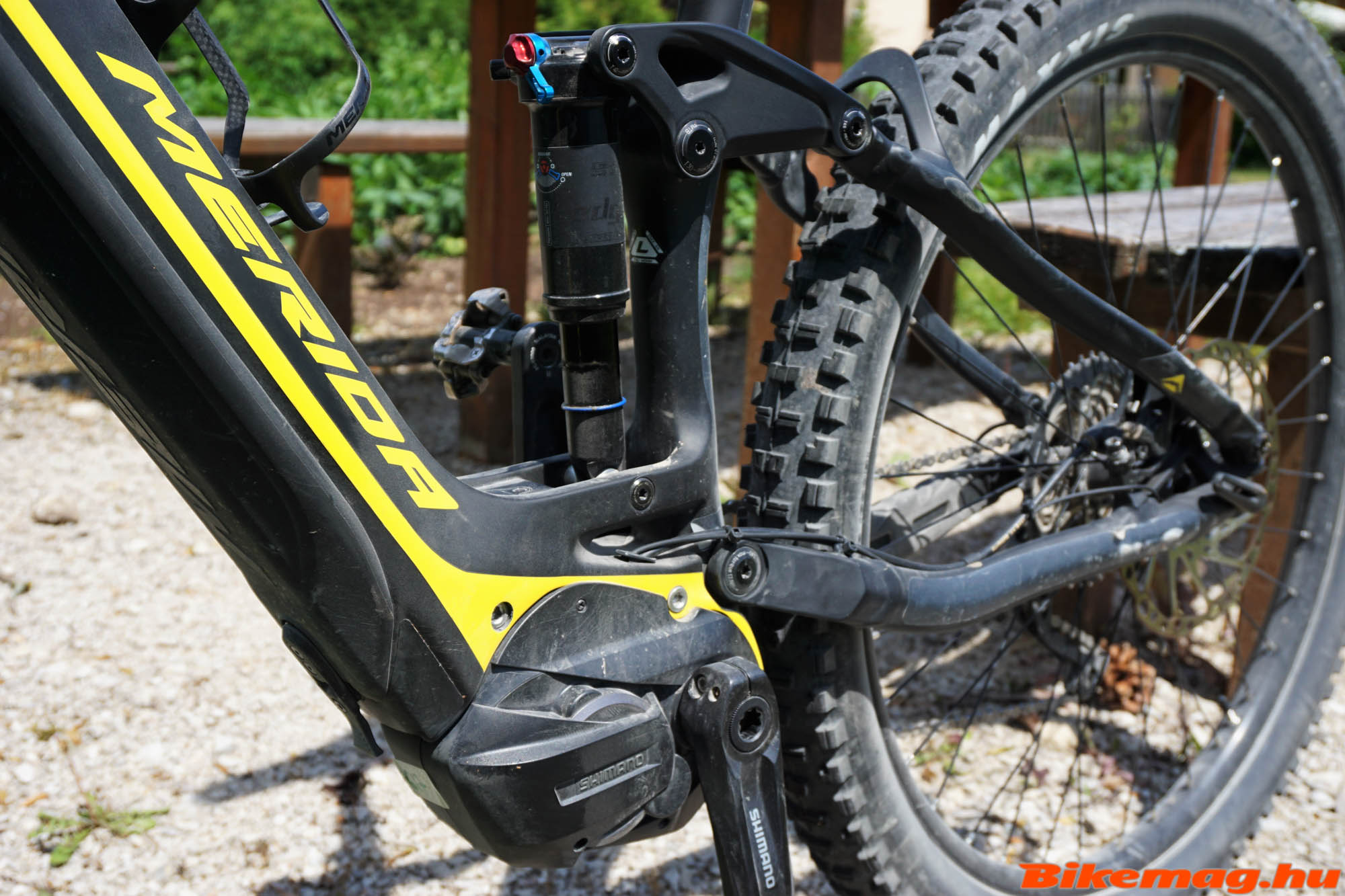 The methodology of e-bike testing is an interesting question. It’s especially hard explain the difference between two models when both are driven by the same electric motor system. How can the reviewer judge the merit of one over the other when both are propelling the bike at ridiculous speeds up a mountain trail? Here we must rely on the perceivable difference in frame geometry, the role of suspension technology and the equipment to highlight the dissimilarities. And there is the aspect of how the motor reacts to rider input, which in fact is the essence of the e-bike experience. The following video clips demonstrate how much engineering effort has gone in the development of the newly developed eOne-Sixty and the eOne-Forty models.

In case of the eOne-Forty, there is more to dissect that the technology outlined above. For example there is the aesthetic aspect. I believe few cyclists who having had a chance to see this bike are not at the opinion that it’s one of the best looking piece of bike technology around. My favorite design detail are the cooling fins next to the head tube. They lend a distinct hi-tech industrial look to the frame. I simply can’t resist looking, it’s visually intriguing, moreover, the so-called Thermo Gate has a very important technical function: namely to cool the battery in the frame compartment while riding. The relatively slender down tube hides another visually pleasing detail, the battery cover. Once again the cover is not just an elegant design, but it was designed to provide effective protection and lessen the noise of rocks and branches knocked up from the ground. Another form of protection comes from the so-called Internal Block. This serves to guard against the fork crown hitting the carbon-composite down tube in the unfortunate case when the rider takes a spill with the bike. 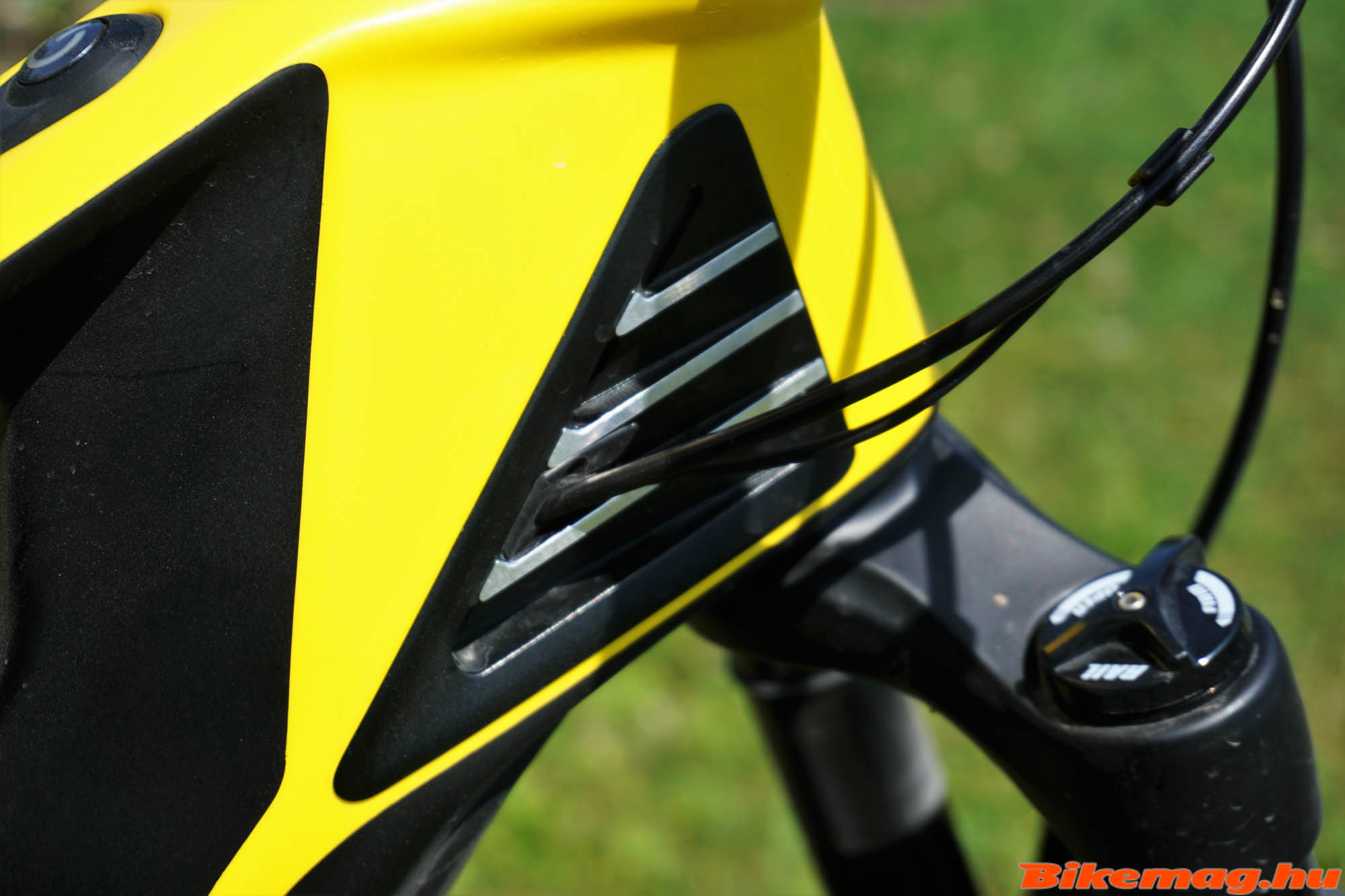 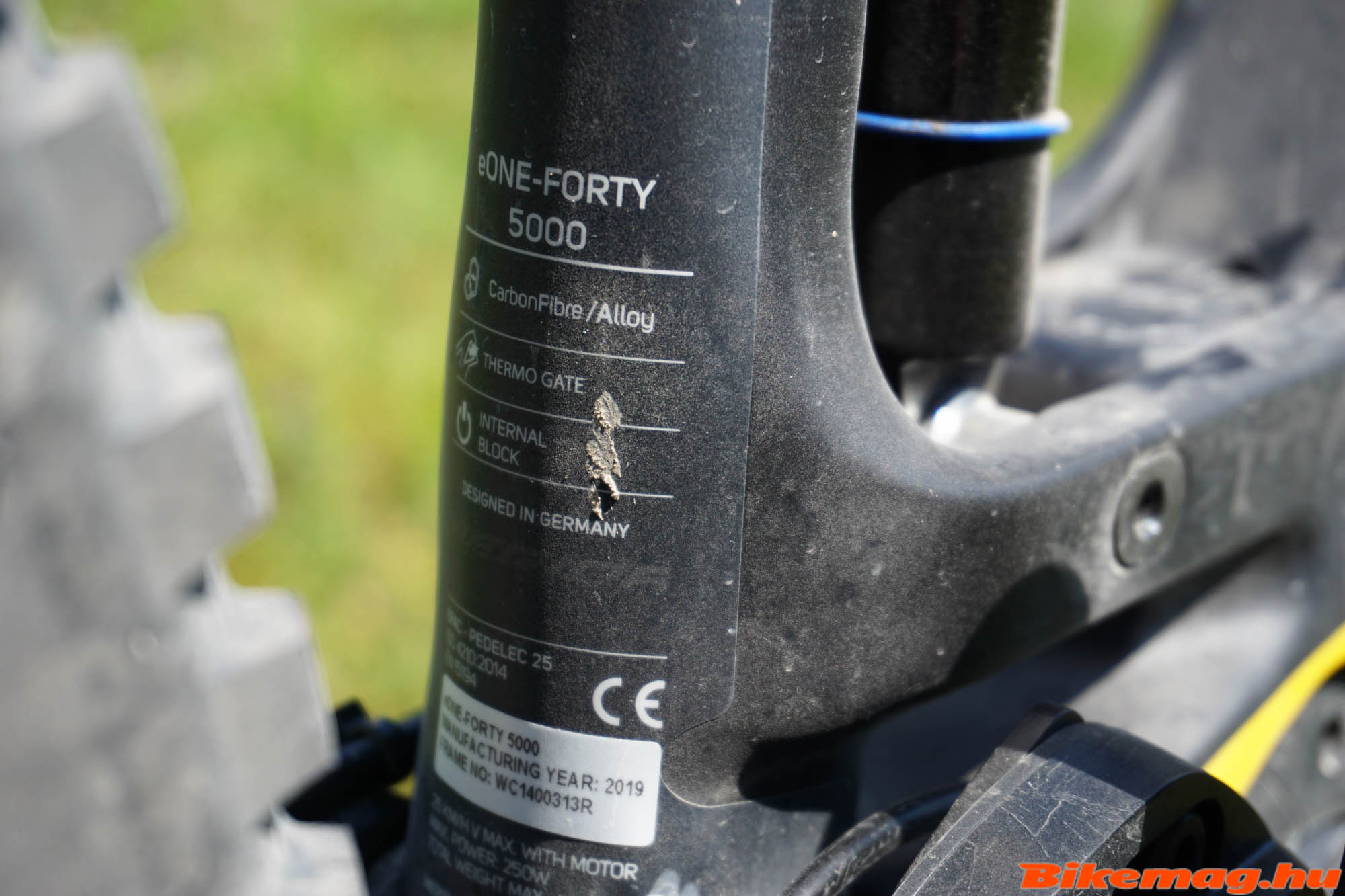 Turning our attention to the suspension technology, the eOne-Forty 5000 model I rode is equipped with a Marzocchi Z2 front fork with 140mm of travel offering with various adjustments like compression and rebound dampening. The frame integrates a Suntour RS Edge shock controlling suspension travel at the back, and providing similar adjustment features. As I have mentioned previously, the suspension technology is the aspect which differentiates the eOne-Sixty and the eOne-Forty. This results in not only 20mm less travel for the “little brother”, but also important differences in frame geometry. The eOne-Forty has a steeper head and seat tube paired with lower center of gravity, resulting in somewhat better low speed handling. Meanwhile the bigger sibling offers more stability to cope with more challenging terrain and high speed descending. For this reason the eOne-Sixty employs a piggyback shock for better heat management during long fast descents. 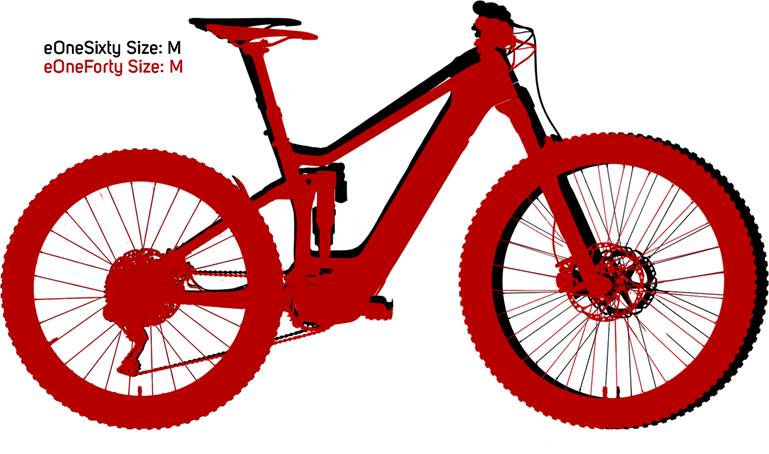 A visual representation of the differences in frame geometry: steeper angles and the lower bottom bracket for the eOne-Forty. 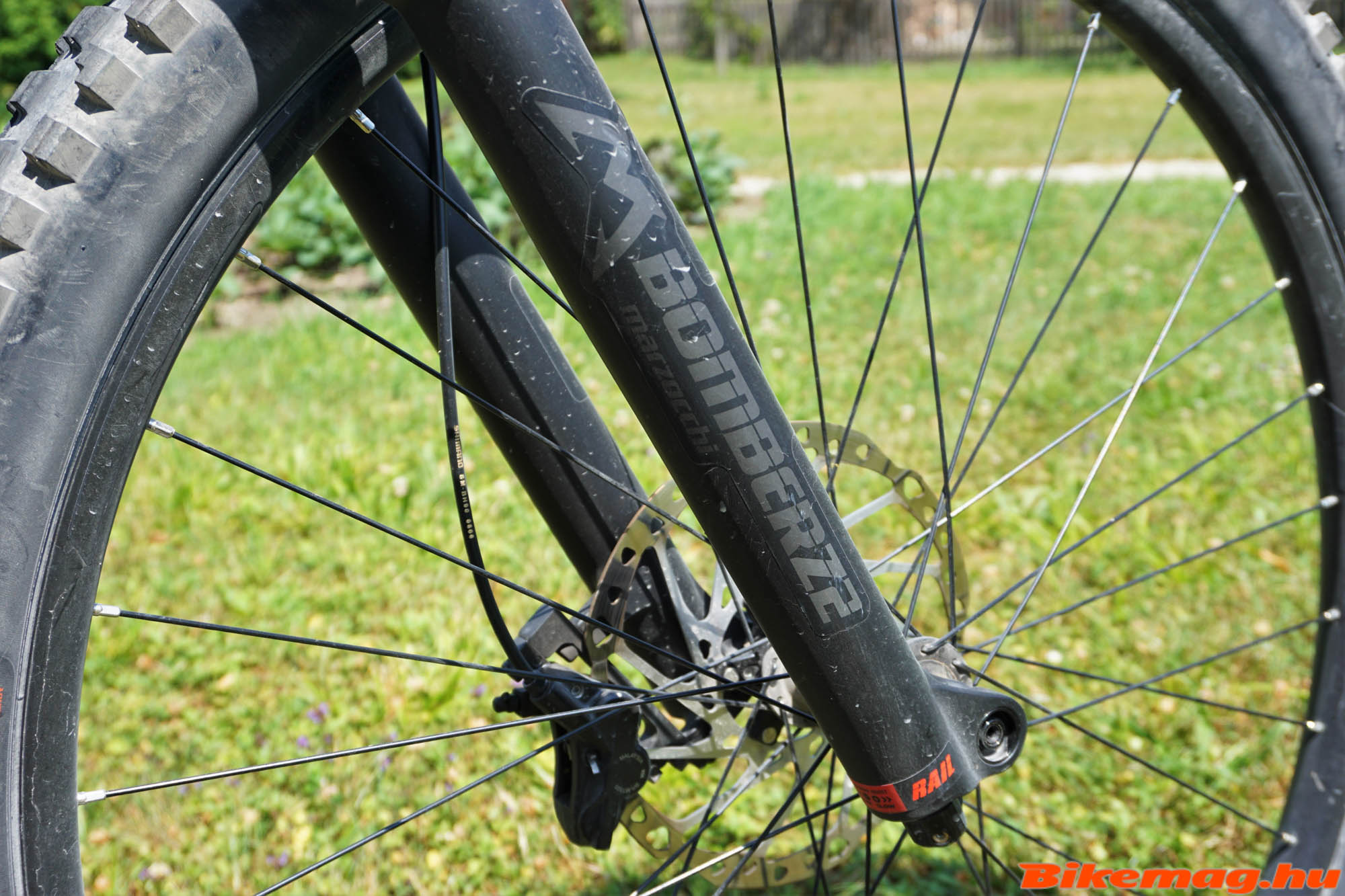 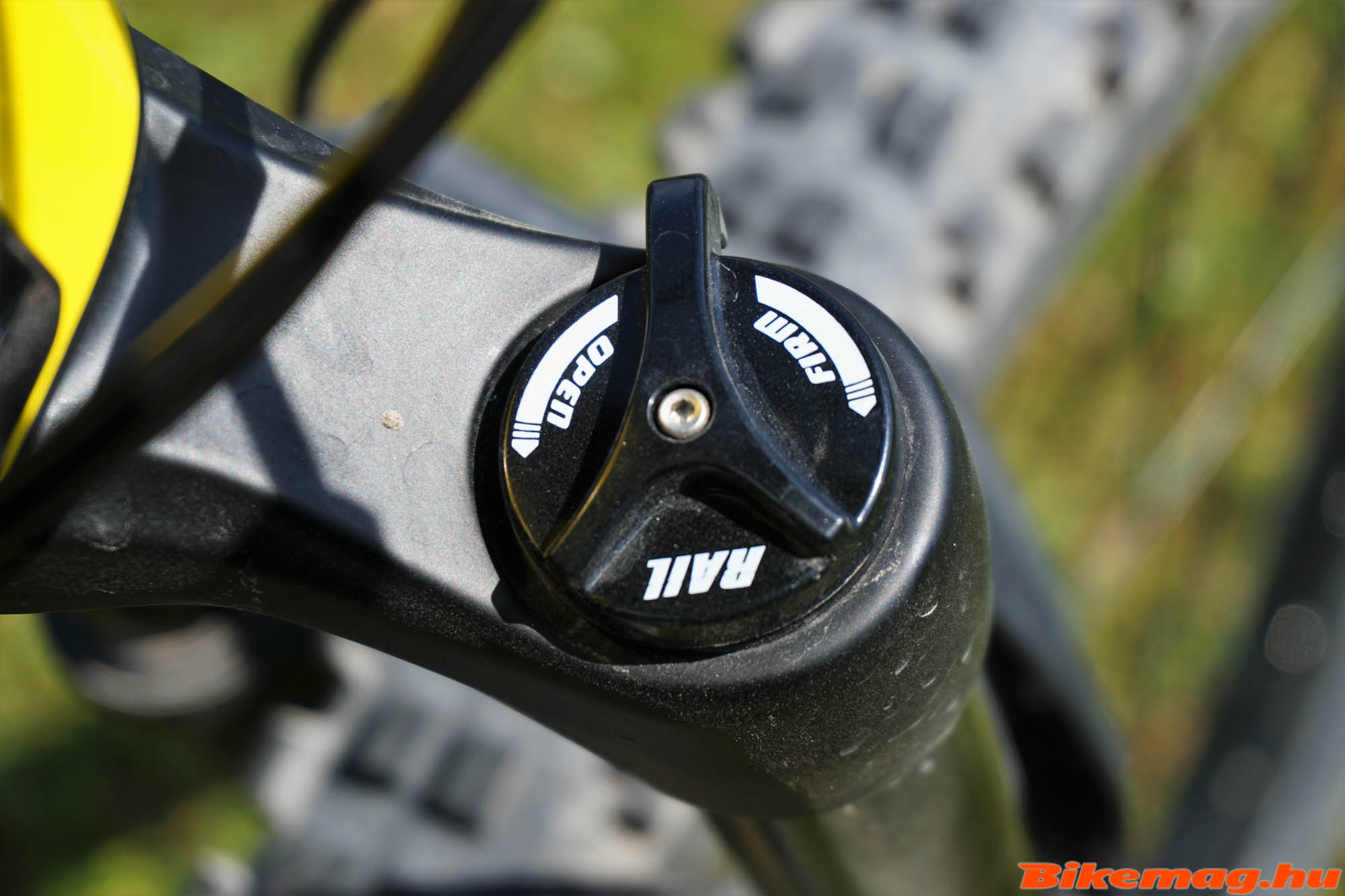 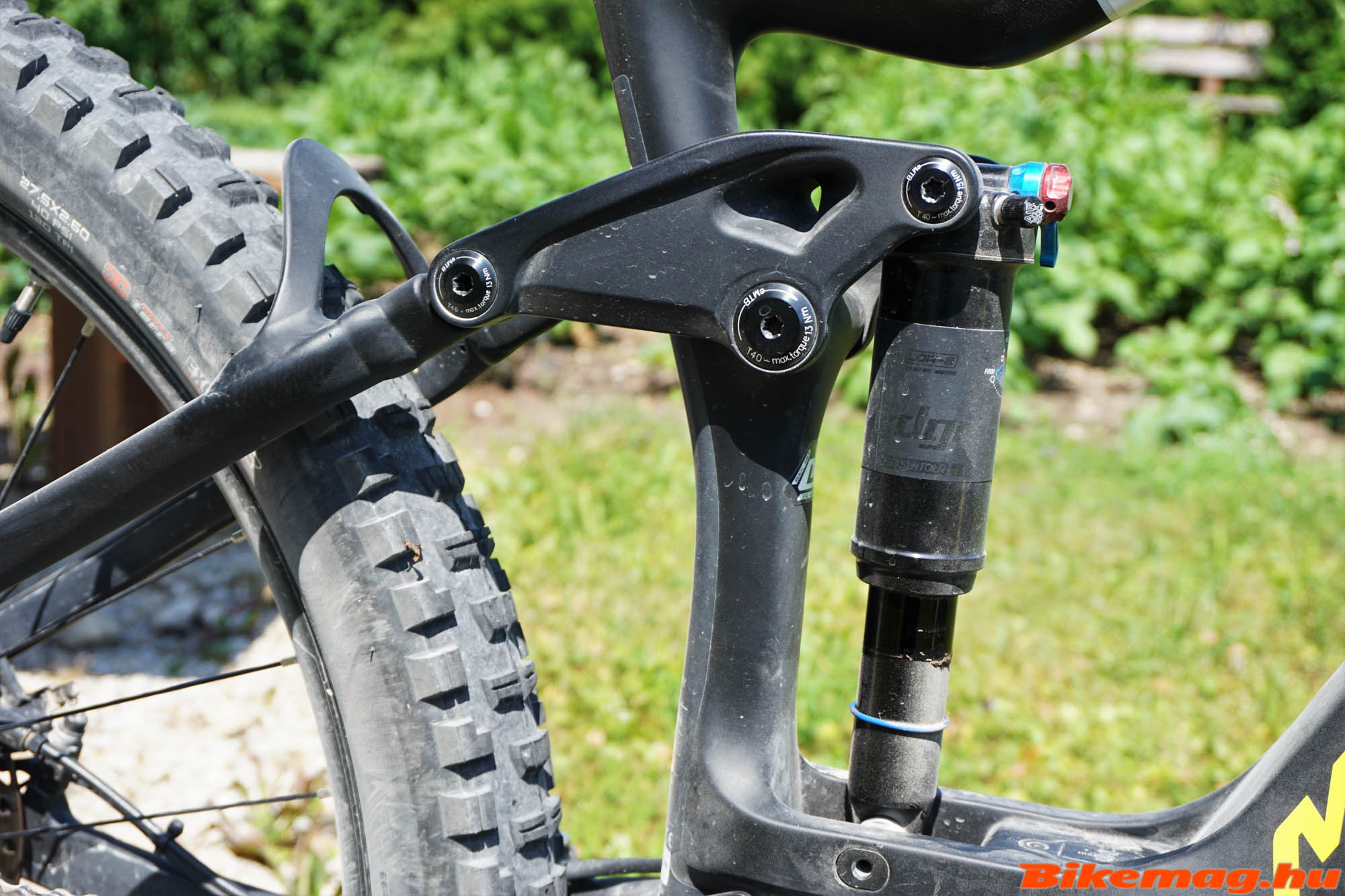 The eOne-Forty 5000 is equipped in most part by a Shimano Deore components which are known to be reliable, although a little overbuilt, so not the lightest on the market. 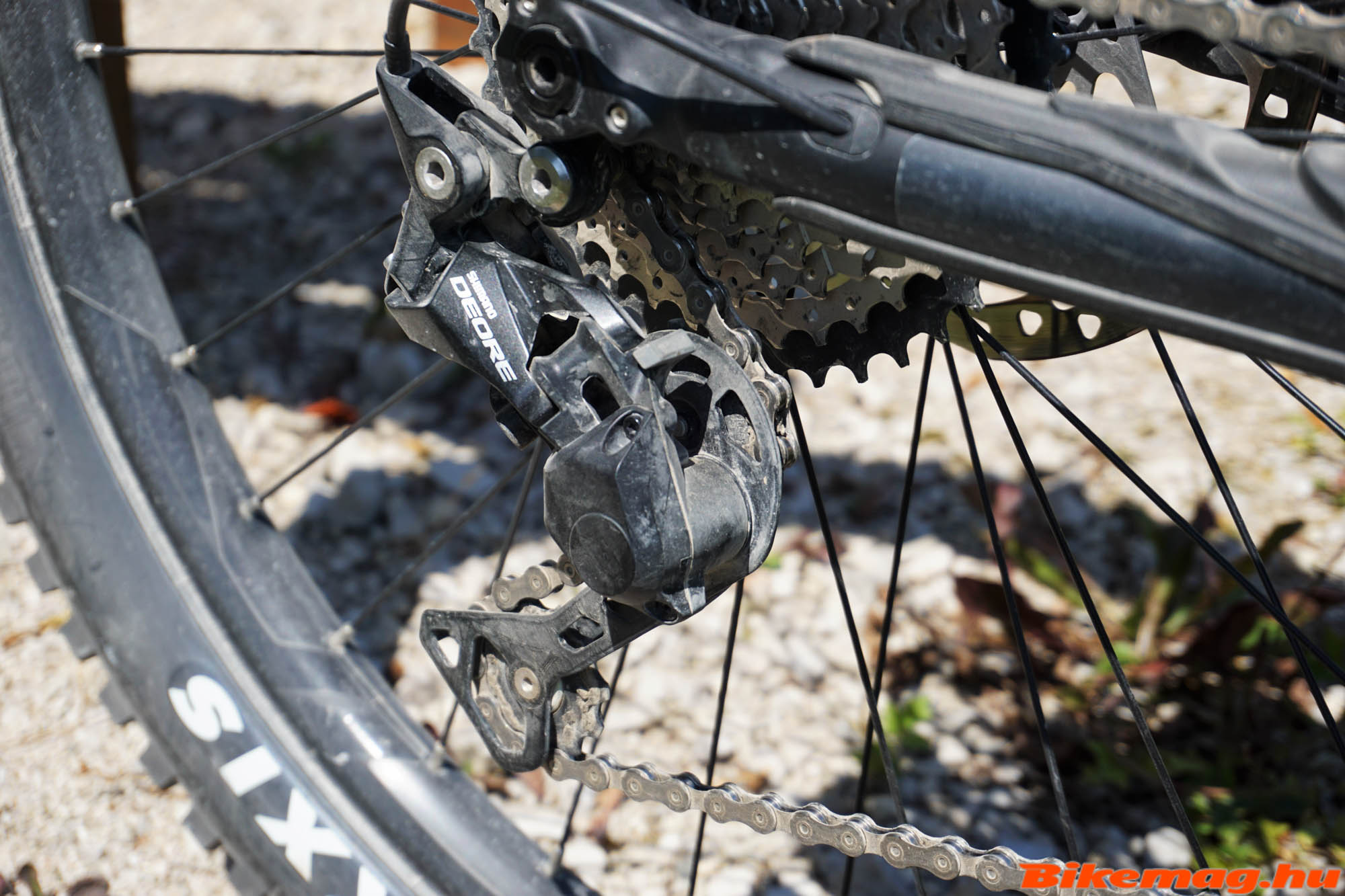 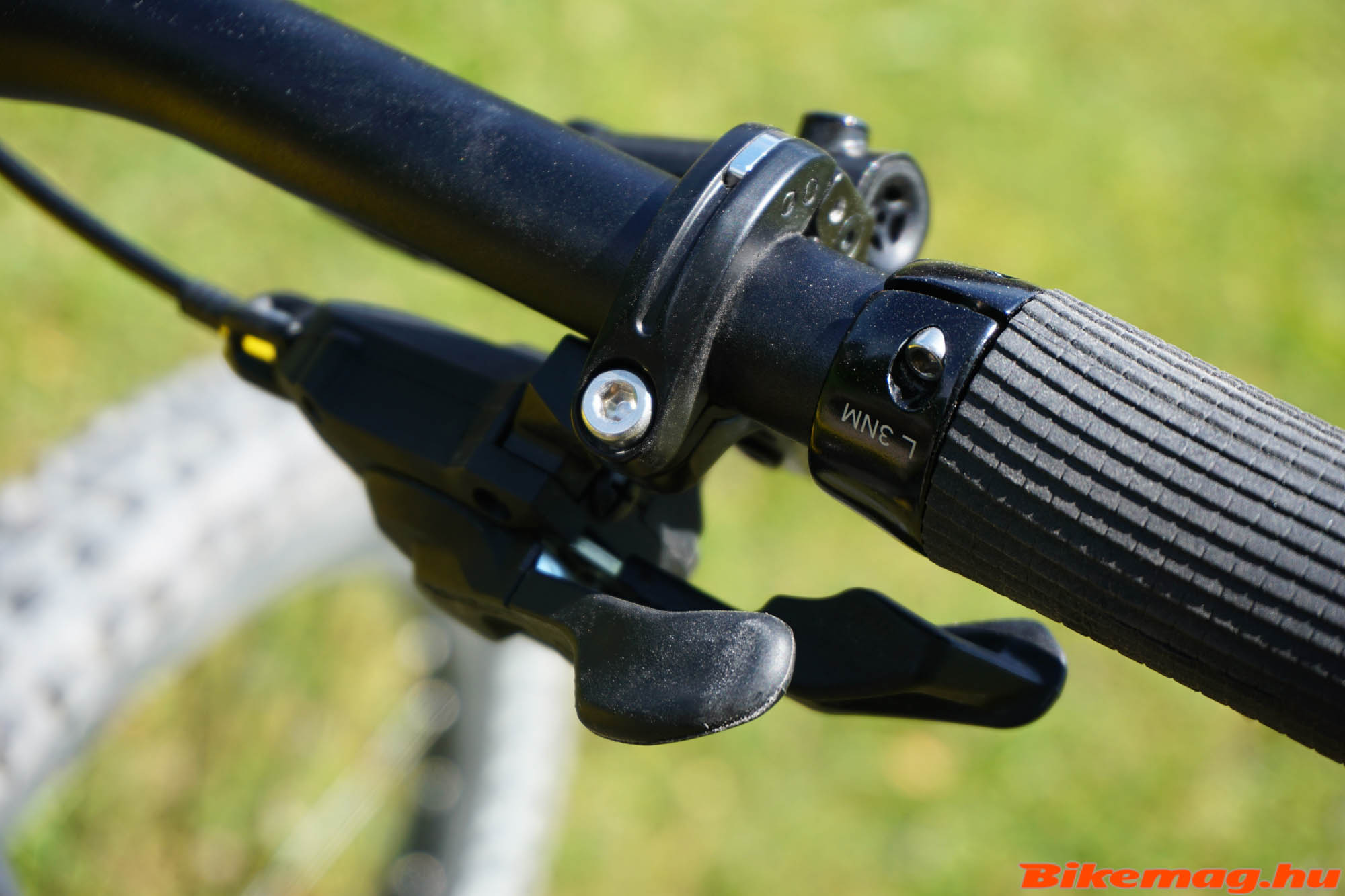 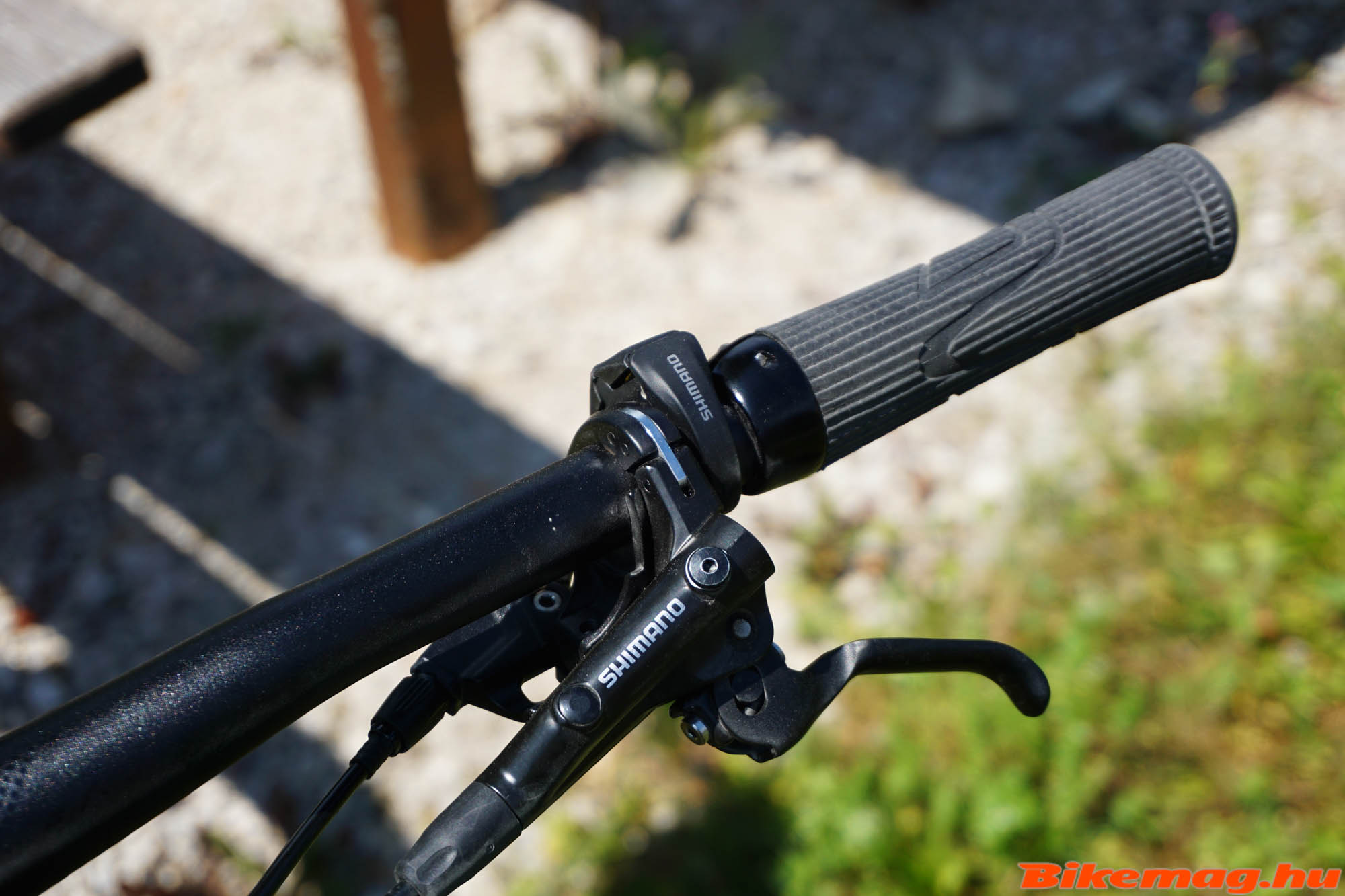 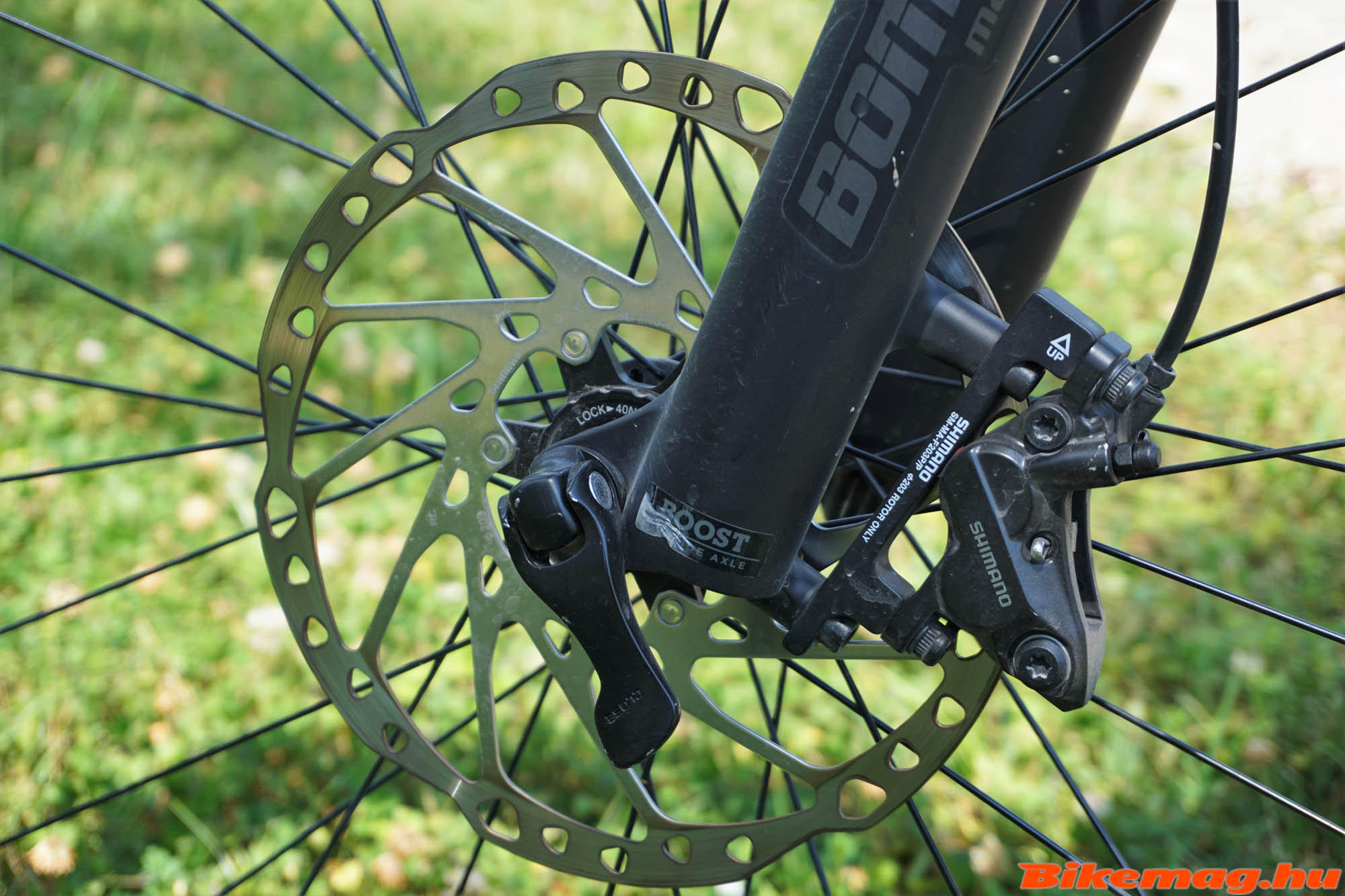 Since eOne-Forty is an eMTB, the motor system is perhaps more important than the shifting or the braking. For the eOne-Forty 5000 model variant I tried Merida had chosen the Shimano E7000 system, which provides no less than 60Nm of torque powered and it’s powered by a 504 Wh battery. (The eOne-Forty is also available with the more powerful E8000 drive system, but in order to get hold of it, you need to acquire the 8000 or 9000 model variant.) 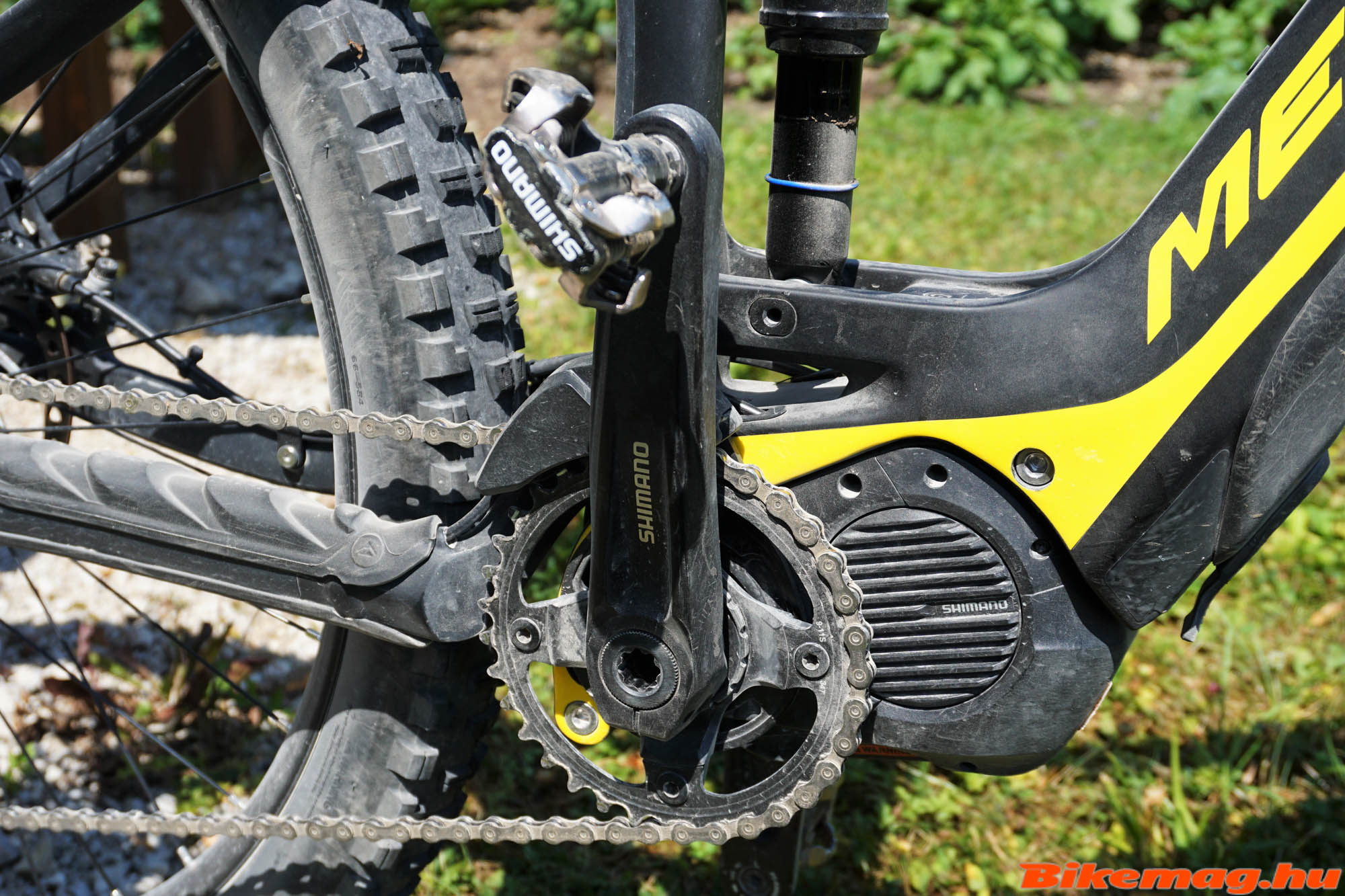 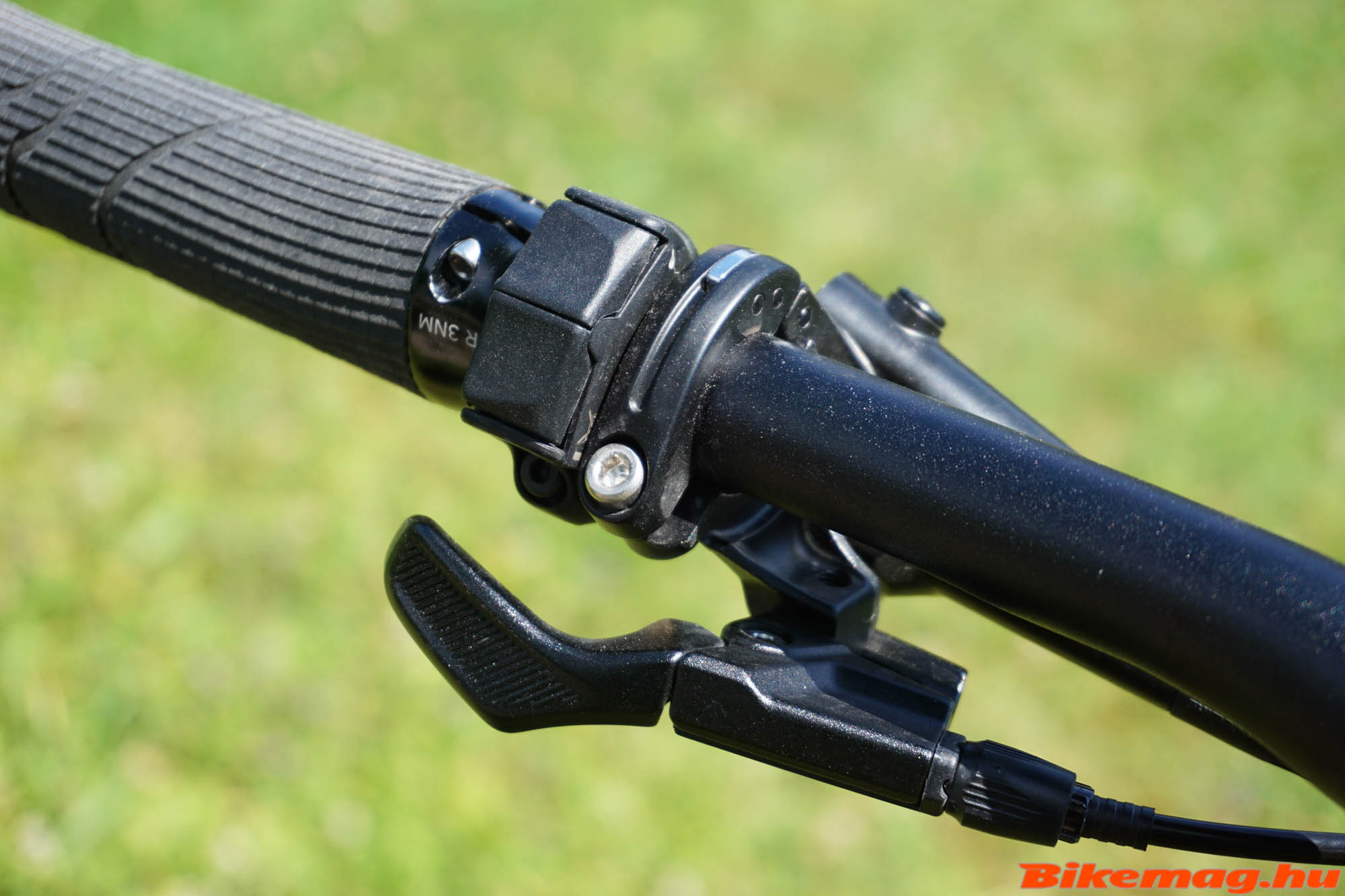 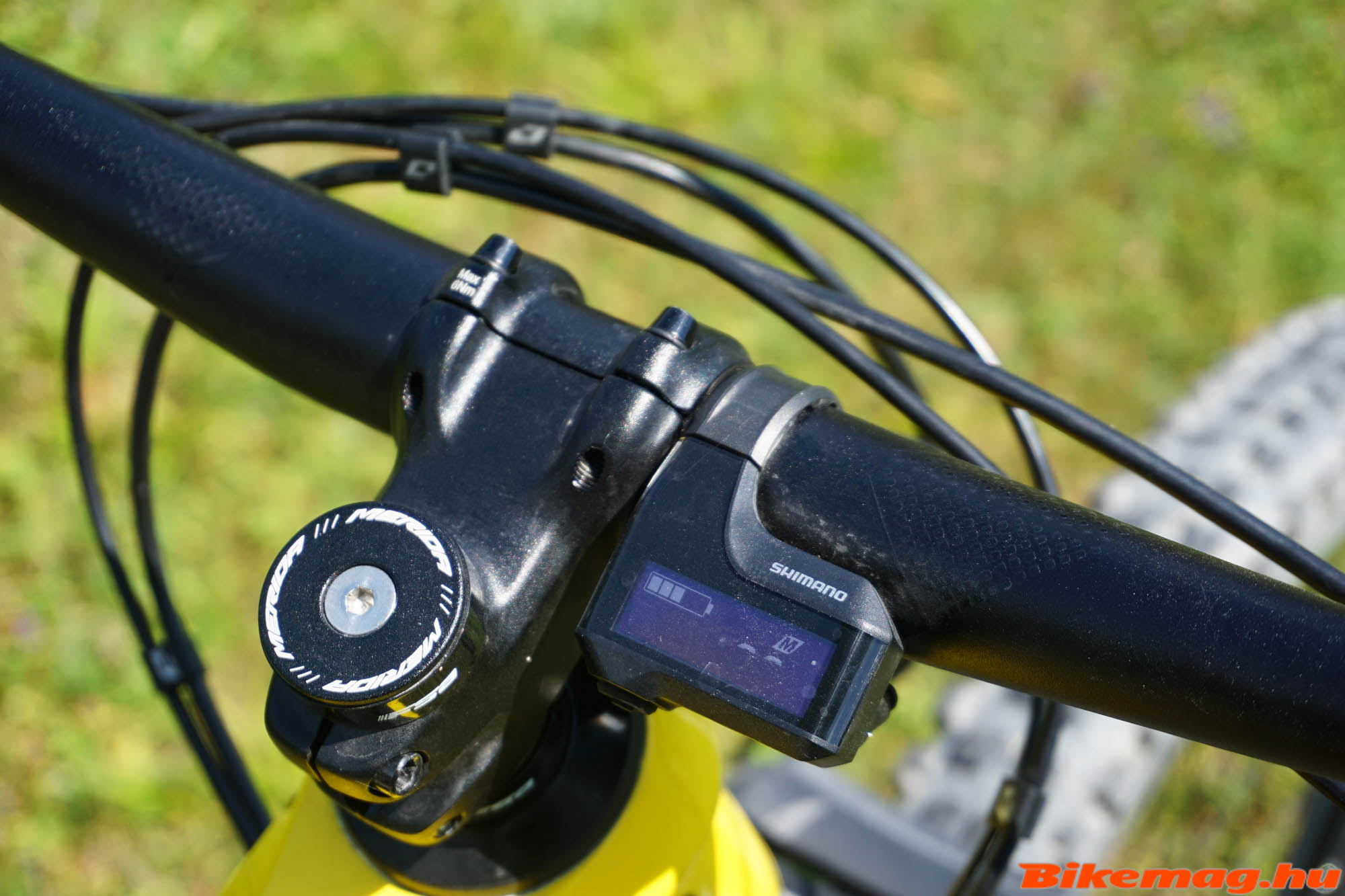 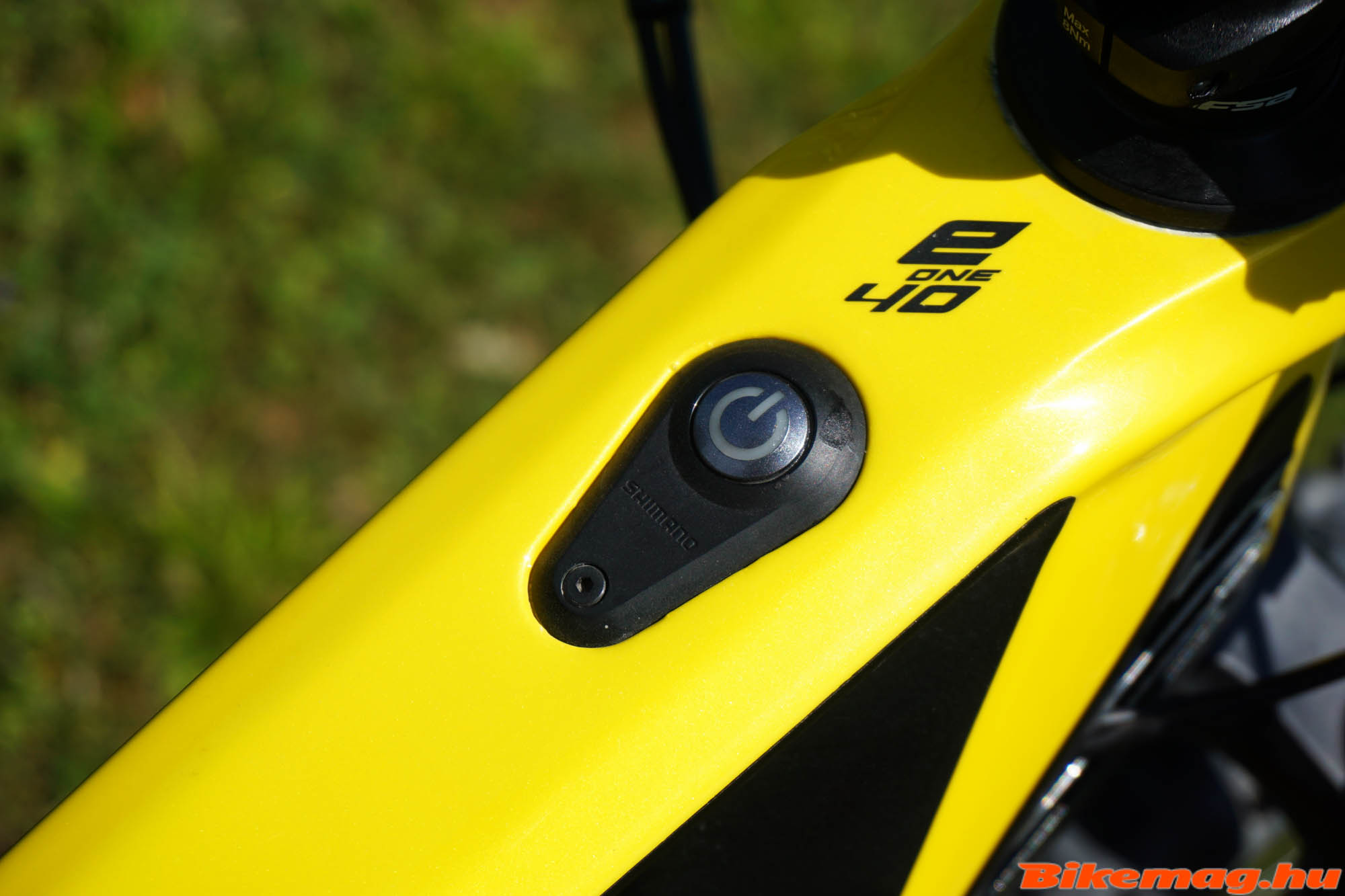 In reality, looking just at the raw numbers gives very little clue as to how the given e-bike is likely to perform. A larger number on paper is more powerful, but in practice the performance is determined by other factors such as how the torque is supplied, how well the drive system is able to follow pedal power and last but not least, how efficiently the motor uses battery capacity. In case of the Shimano motor drive systems we rarely see any hiccups with any of these parameters, but competing brands don’t always have the recipe to get these essential technical variables right. I may add, that in my experience the E7000 system is fine choice, and not much would be gained by moving up to the top of the line Shimano offering. 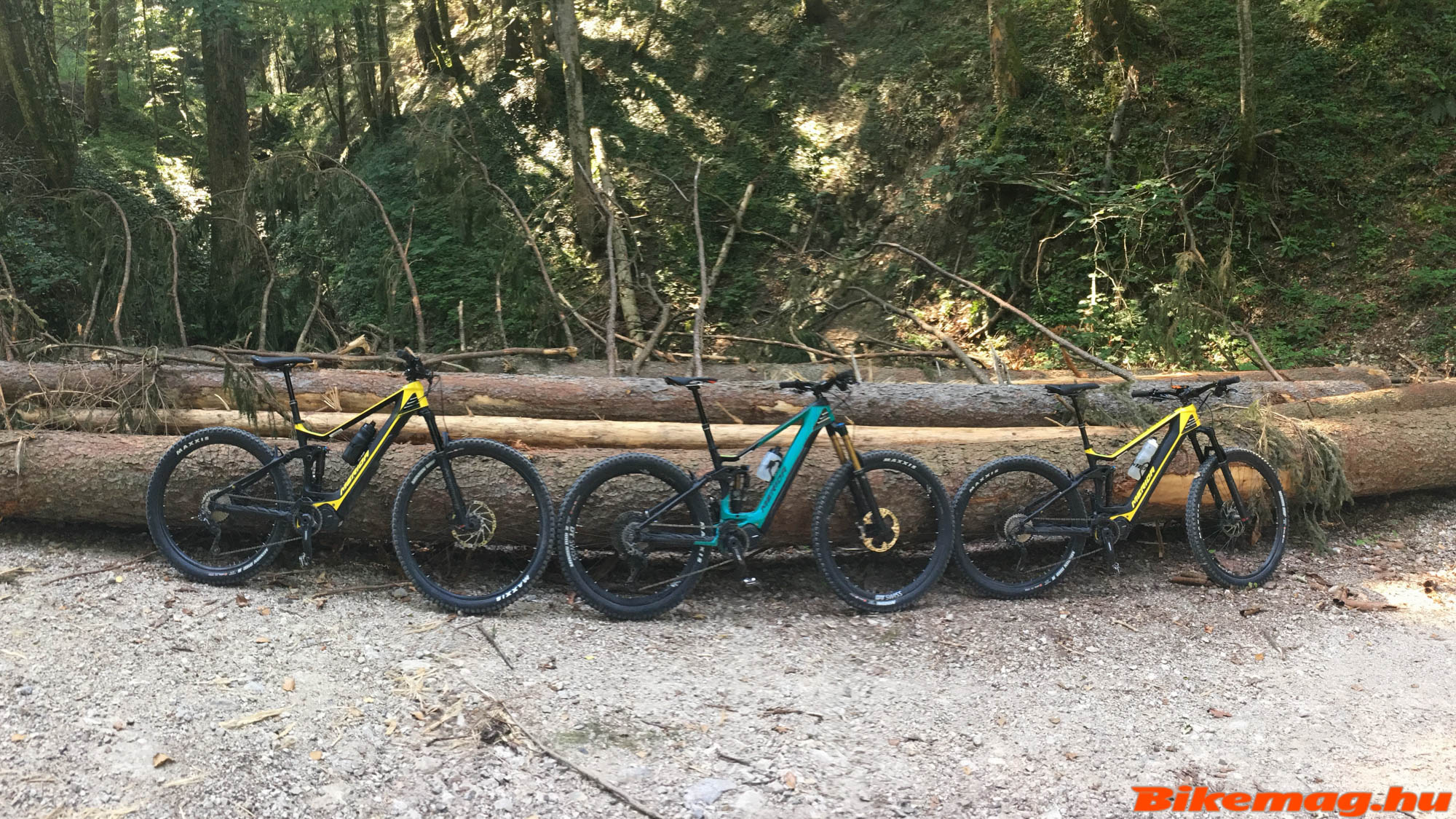 After all this theoretical explication I should finally delve into the experience of the test ride. Three of us headed out into the woods around Ruhpolding on board the newly introduced eOne-Forty bikes. Maybe I should add that we forgot to ask for directions, so we just went on the information we got from my colleague Thommey, who have ridden these trails many times in previous Merida test camps. Well, we sort of got lost on the way up, but finally managed to find the trail that was recommended by Thommey. To be fair, this route proved to be just perfect for this type of bike. 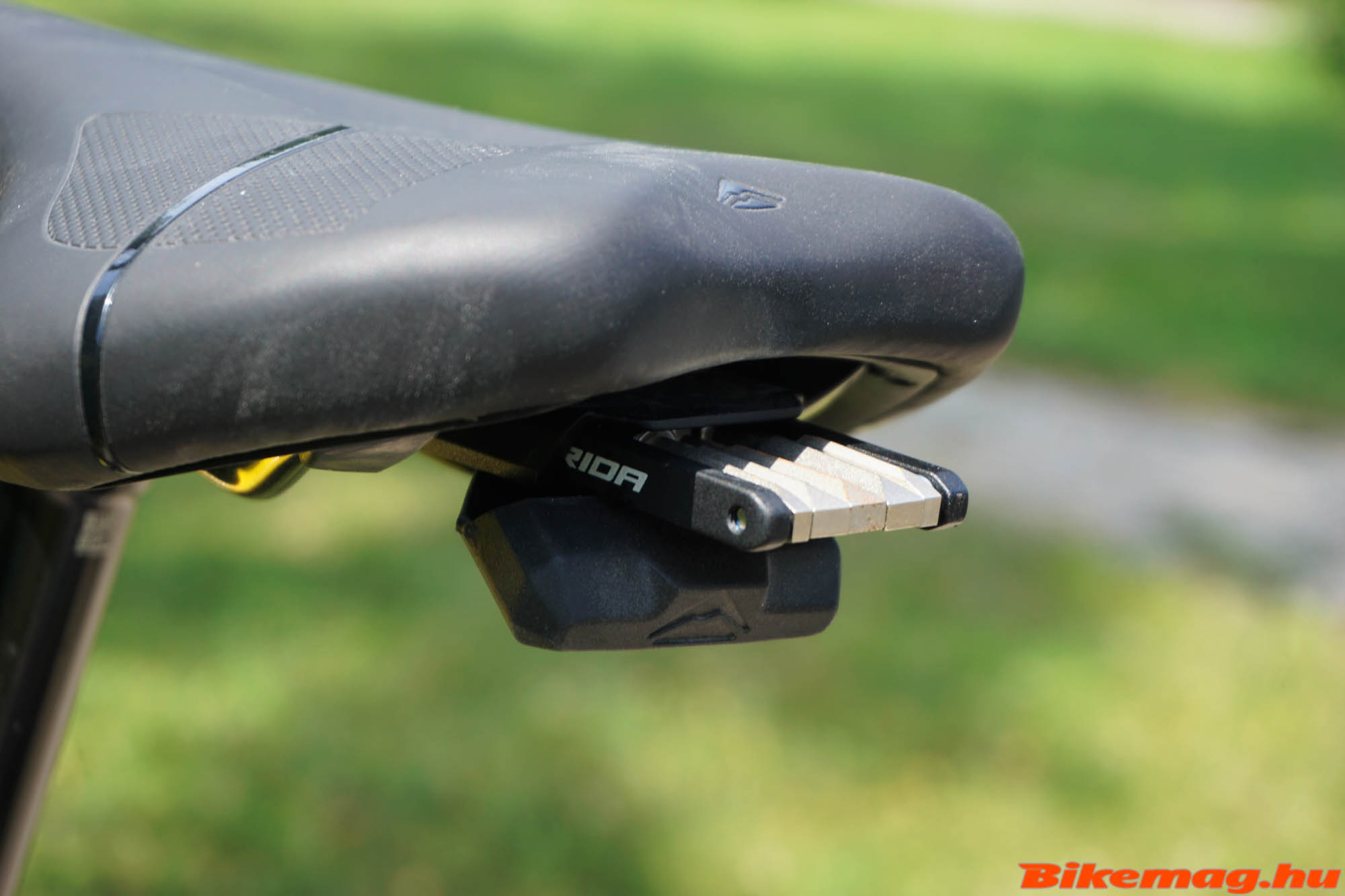 The eOne-Forty is very apt at challenging uphills: the 140mm travel front and back smoothens out even the roughest of trails, and the motor support is the rider’s savior on the steep sections. You can literary fly up on the insane inclines with speed and momentum that no mortal being could achieve. This godsend character of eMTBs is especially useful for those who are lacking endurance, so this makes the bike ideal for touring in a group, where riders have different abilities. 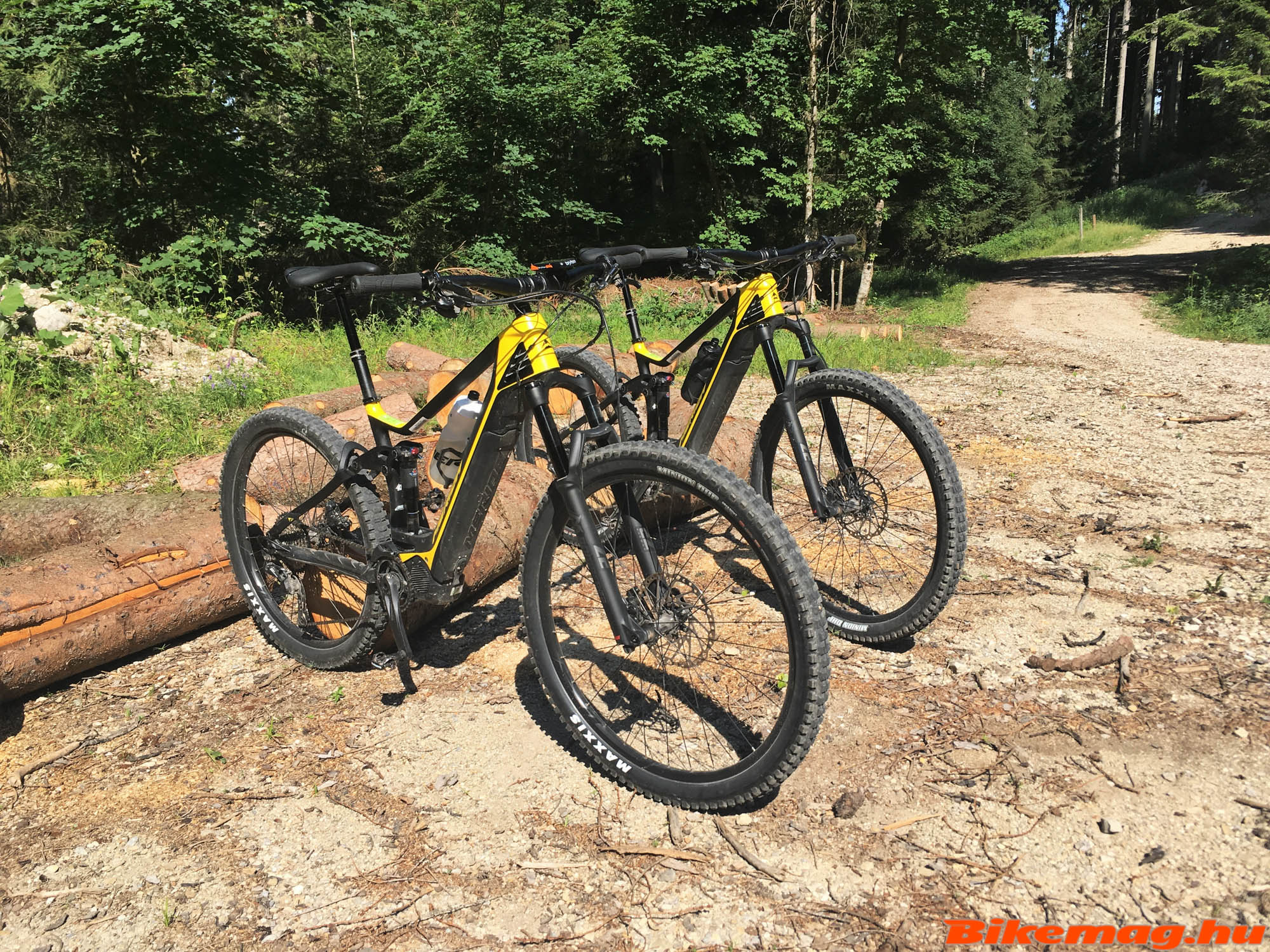 Many times I felt that the eOne-Forty can truly be a game-changer for the way people on MTB trails. The bike literary requests the rider to increase the tempo uphill, so the extra momentum could be used to tackle difficult rocky sections which otherwise would halt most. Moreover, even the steeper angles on the eOne-Forty are relatively slack, so the faster the tempo tends to improve handling. Yes, the handling is quite far from an XC bike, but the speed you can achieve uphill could only be replicated on the whippets of MTB rigs!

As we were making our way up to the top, we could actually hold a conversation at over 15 km/h on rough trails with frequent over 20-25% steep pitches. In a strange manner we were actually discussing which of these sections could actually be ridden without motor assistance, and which would have been impossible to tackle with no support! Miraculously we had little problem with traction thanks to the excellent Maxxis Minion DH tires, which are renowned for their grip. And grip is something really needed when there so much torque available! The designers at Merida know how to get the most out of an eMTB experience… 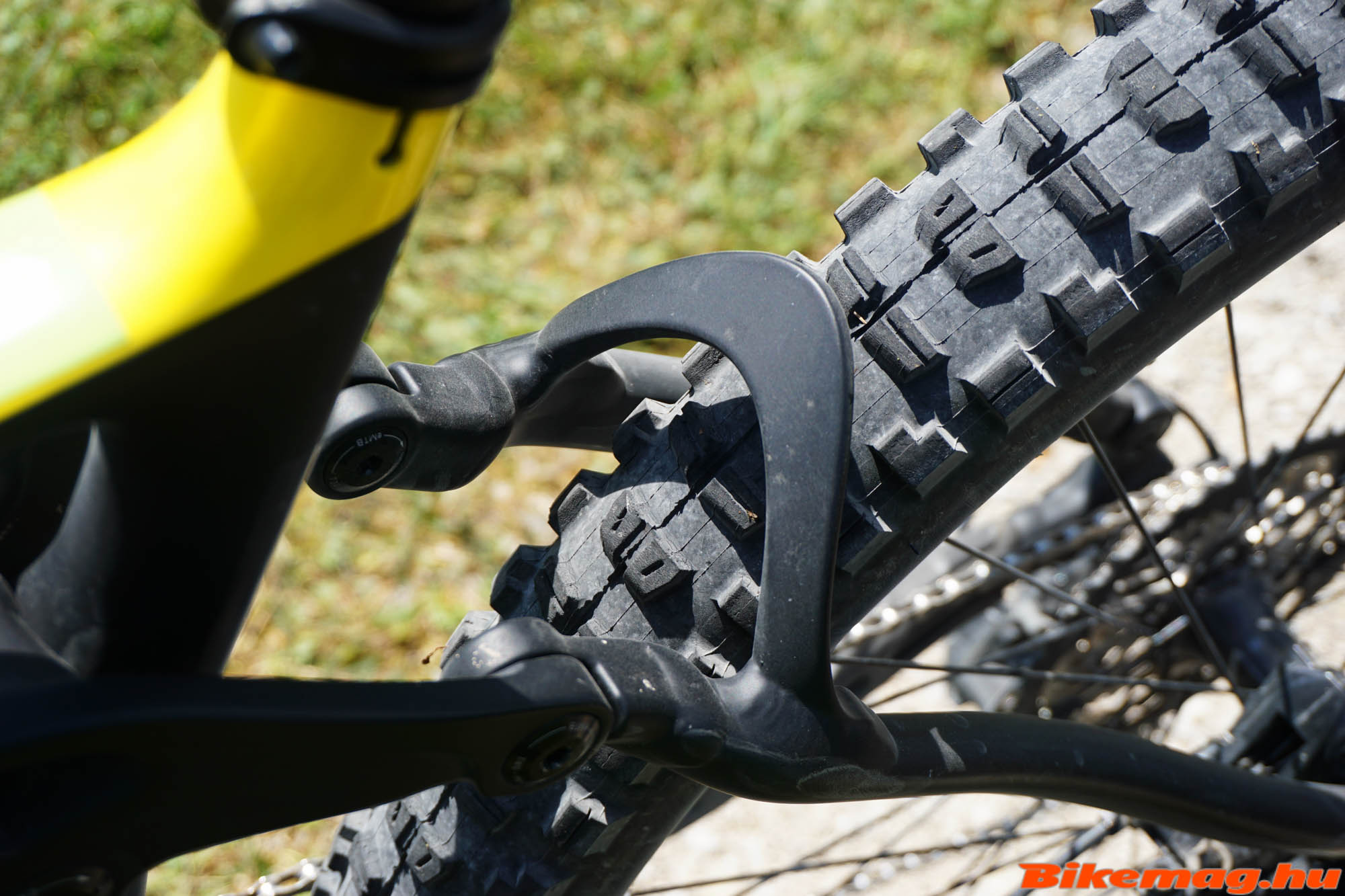 Once reaching the top, we realized that the previous storm has decimated most of the forest, fallen trees blocking the trails left right and center. We had to carry the bikes over these obstacles, which is not the most enjoyable when bikes weight north of 50 pounds. Actually the eOne-Forty is among the lighter mid-travel eMTBs on the market, so I could just imagine what this section would have been like aboard a heavier rig. A power gym exercise for sure!

After much the barrier hopping we managed to locate the downhill section of the trail that would take us back to the base camp. Thommey wasn’t joking: that’s a hell of a trail with very steep tight corners littered with rocks and roots. Many times I was absolutely sure that my MTB career would end here, and I would soon be in an ambulance helicopter heading to be reassembled in the surgery. But on every such occasion the tires managed to get adequate traction, and the eOne-Forty got me through each and every tight spot. In such situations I could simply not imagine surviving on any bike I know of. The eOne-Forty is a fantastic machine, one where everything works as it should! 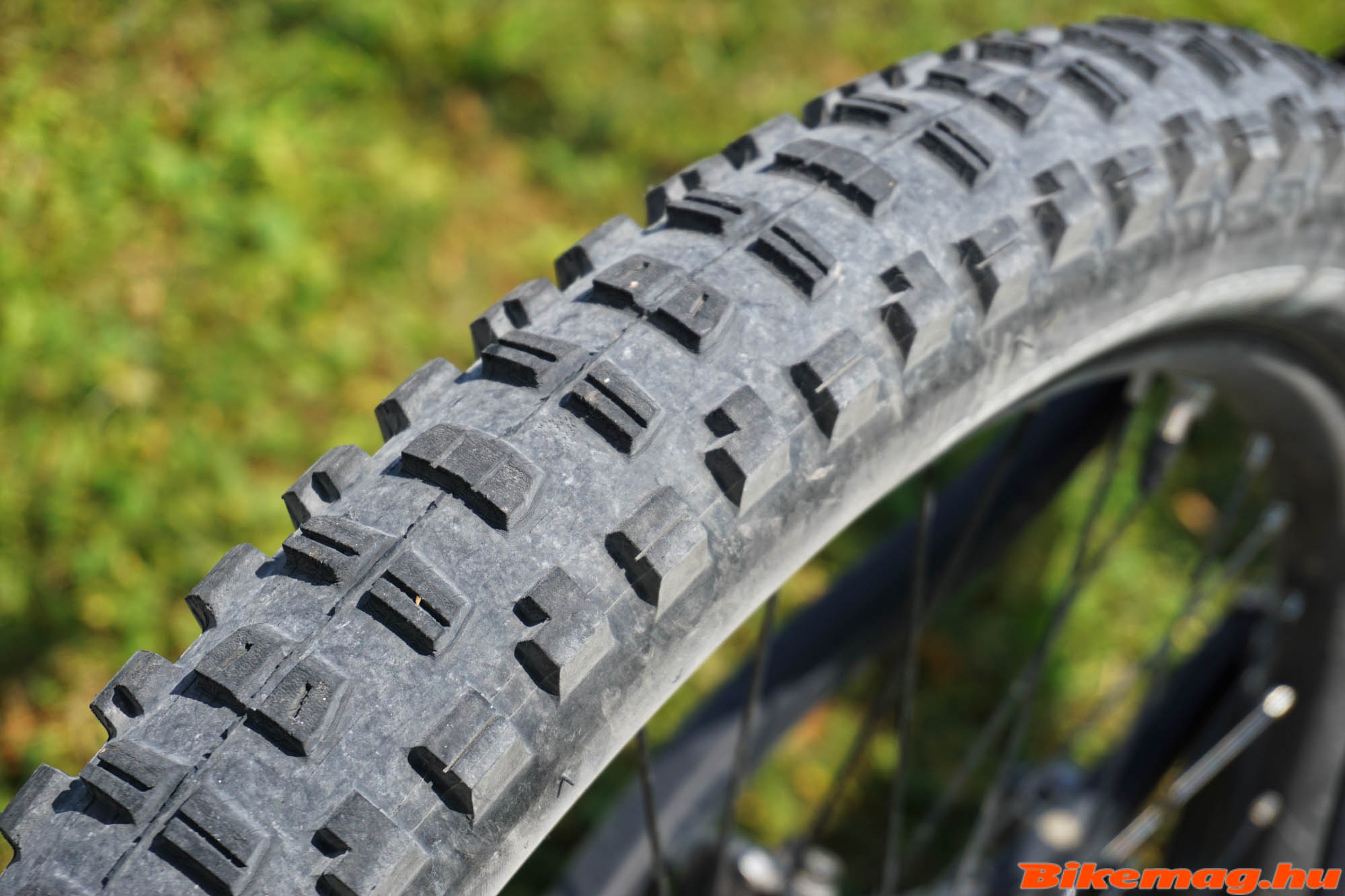 The DH-oriented tire which saved my life!

After this hair-raising descent came some more downhill on fast fire roads. The good thing about eMTBs is that the downhills seem longer that the climbs, thus we raced down and down into the valley for what seemed an eternity. It was a great experience, and I have to say that the bike not only excels on the challenging trails, but on the fast descends as well. Wild speeds were clocked, and at no point I felt to be losing control. The slack frame angles really help in this type of riding. I can only imagine how I would have enjoyed the fire roads aboard the eOne-Sixty with an even slacker geometry! For the reasons above I can recommend these new Merida bikes for general MTB touring as well as adventure riding.

Who is the ideal rider for this bike? Fundamentally any mountain biker’s face will be grinning with delight at both the uphill and descending performance, so suitability is not really a question. It’s clearly one of the best designed MTB bikes around. The better question should be WHICH of the two eOnes is more suitable for you! Not having ridden the eOne-Sixty I can only guess that eOne-Forty would probably be enough of a bike for me, but those looking for even greater challenges, could opt for the longer travel, slacker geometry variant. Merida has really put the bar very high in the realm of eMTBs!

The eOne-Forty has four model variants, from which the 5000 is the third in line. The two better-equipped alternatives are available with the most advanced Shimano E8000 drive and higher end components.

More information can be found on the Hungarian distributor’s website.