Nyitólap » English » How are Decathlon bikes made? – A visit to the B’twin Village
EnglishEnglish biketrend

How are Decathlon bikes made? – A visit to the B’twin Village

There are various assumptions circulating in the cycling community concerning bikes sold in Decathlon. Some believe they are only department store junk, others have a very positive opinion about the bikes and related gear. Based on our experience reviewing some of the “rigs”, we now tend to associate with the latter camp. Despite the favorable impressions, the staff at Bikemag still had some reservations about how these bike models were created. Are they actually devised by Decathlon or purchased as finished products from factories in the Far-East? To answer this and other related questions, we were invited to the B’twin Village in Lille, where bikes sold in Decathlon are designed and assembled. 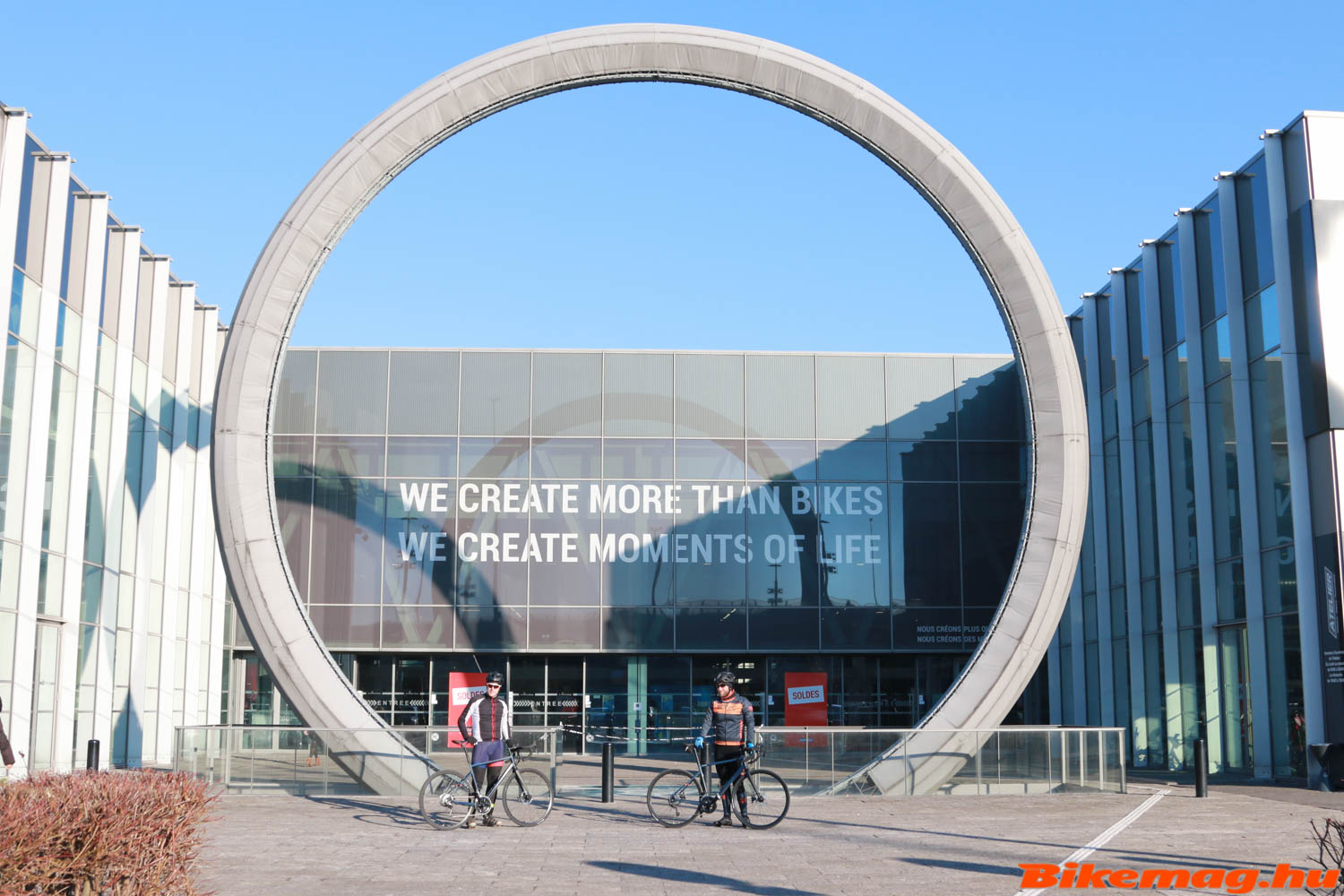 Hungarian cyclists are probably familiar with the bike selection found at the Decathlon stores. According to our reader survey, most are aware with the B’twin brand, which also figures in the name of the French headquarter. (By the way, this year sees the launch of new brand names at Decathlon, but that’s a story of a future installment of this series.)

B’twin Village in Lille, France is actually a huge Decathlon store carrying predominantly products related to cycling and triathlon. The other portion of the one-time tobacco factory houses the testing facilities and the offices of the biking division. This is where the design of bikes and accessories are carried out. 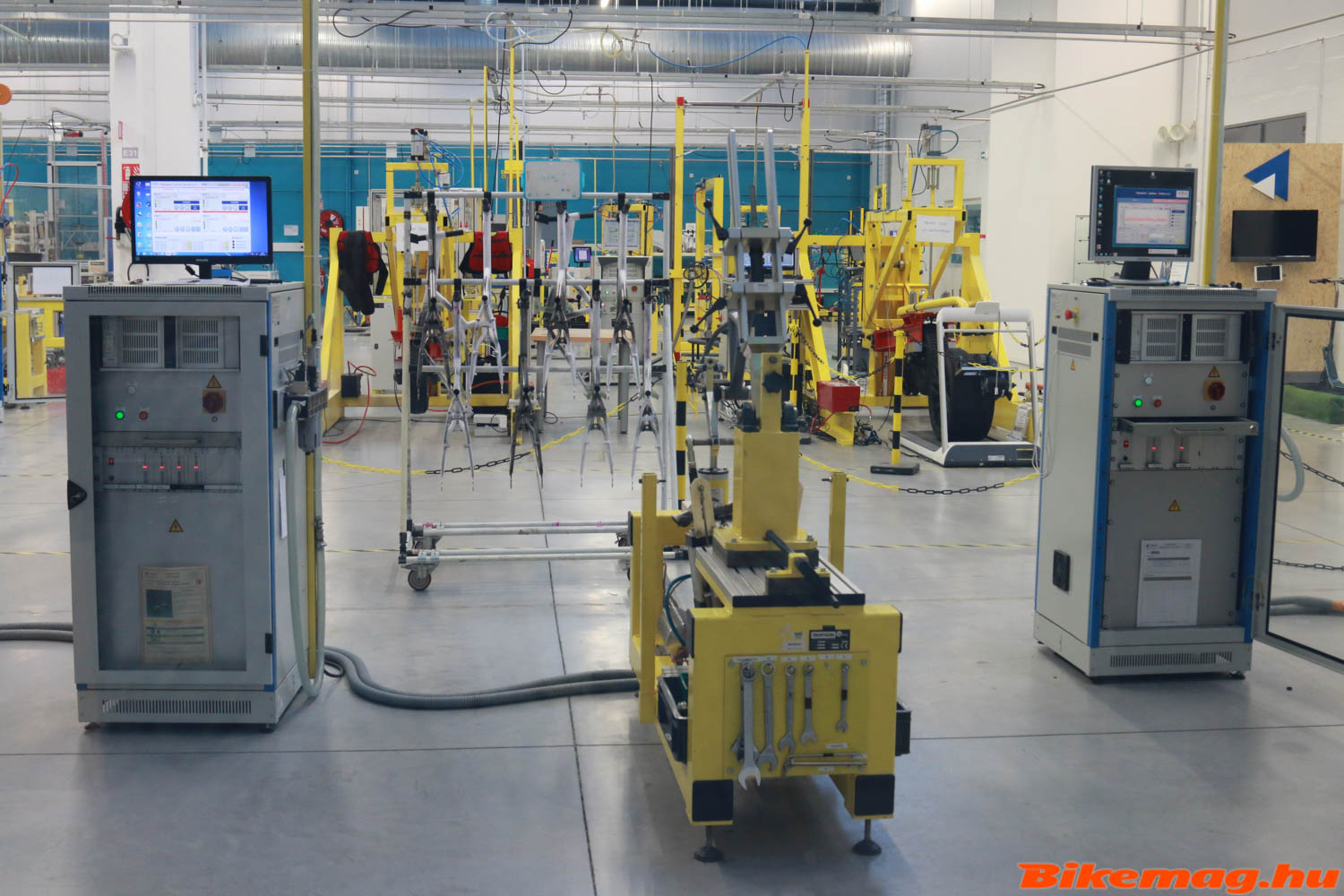 Bikes and accessories are tested on location

To be honest – knowing all too well the workings of the bike industry -, I had a hard time believing what the marketing department at Decathlon states: “Our products are designed in house.” It makes little sense to design bikes and accessories, when the almost identical items can be ordered form a myriad of manufactures from the Far-East. The suppliers are ready to print any logo on their goods, and the whole bike industry is based on this exact model of commerce. Nevertheless – Decathlon assured us – most of the bike range is designed by their engineers, merely the low-priced segment of their offerings are sourced in the conventional fashion. 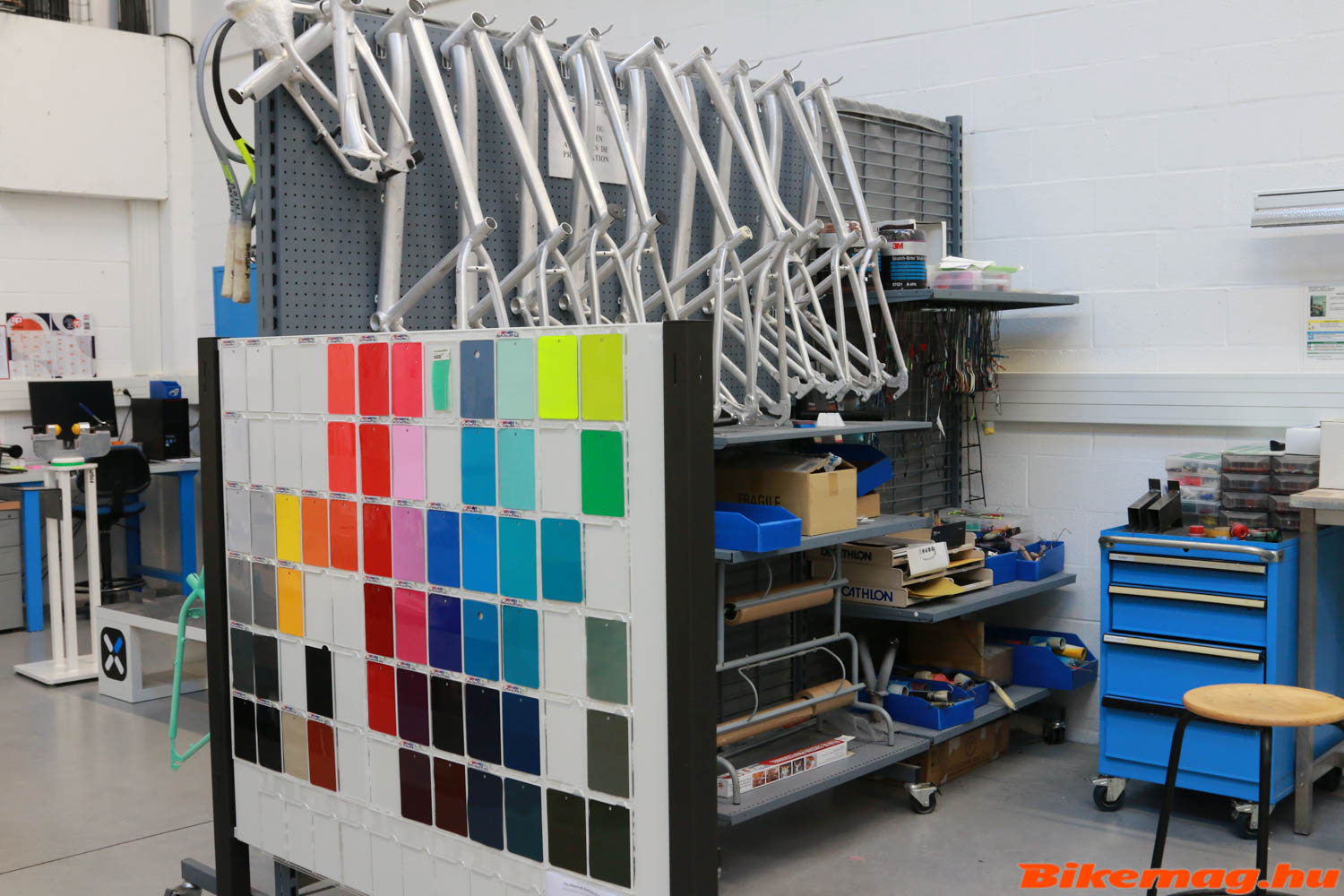 This topic has been on the agenda on many occasions with the management of the Hungarian division of Decathlon. I was still expecting to see a different story in Lille than we were presented within the local offices. When we arrived in France, first we were invited to a dinner with a senior executive of the B’twin Village who holds a Hungarian nationality. He job is to manage the cross country and orienteering runners division at the Decathlon headquarters. Naturally the topics we discussed covered many aspects of the sports gear market, in the course of which we had a chance to ask the very same questions that were bugging us all along. Knowing well that he is well-versed in the Decathlon marketing strategy and the company philosophy of the French sporting brand, this was a chance we couldn’t blunder. 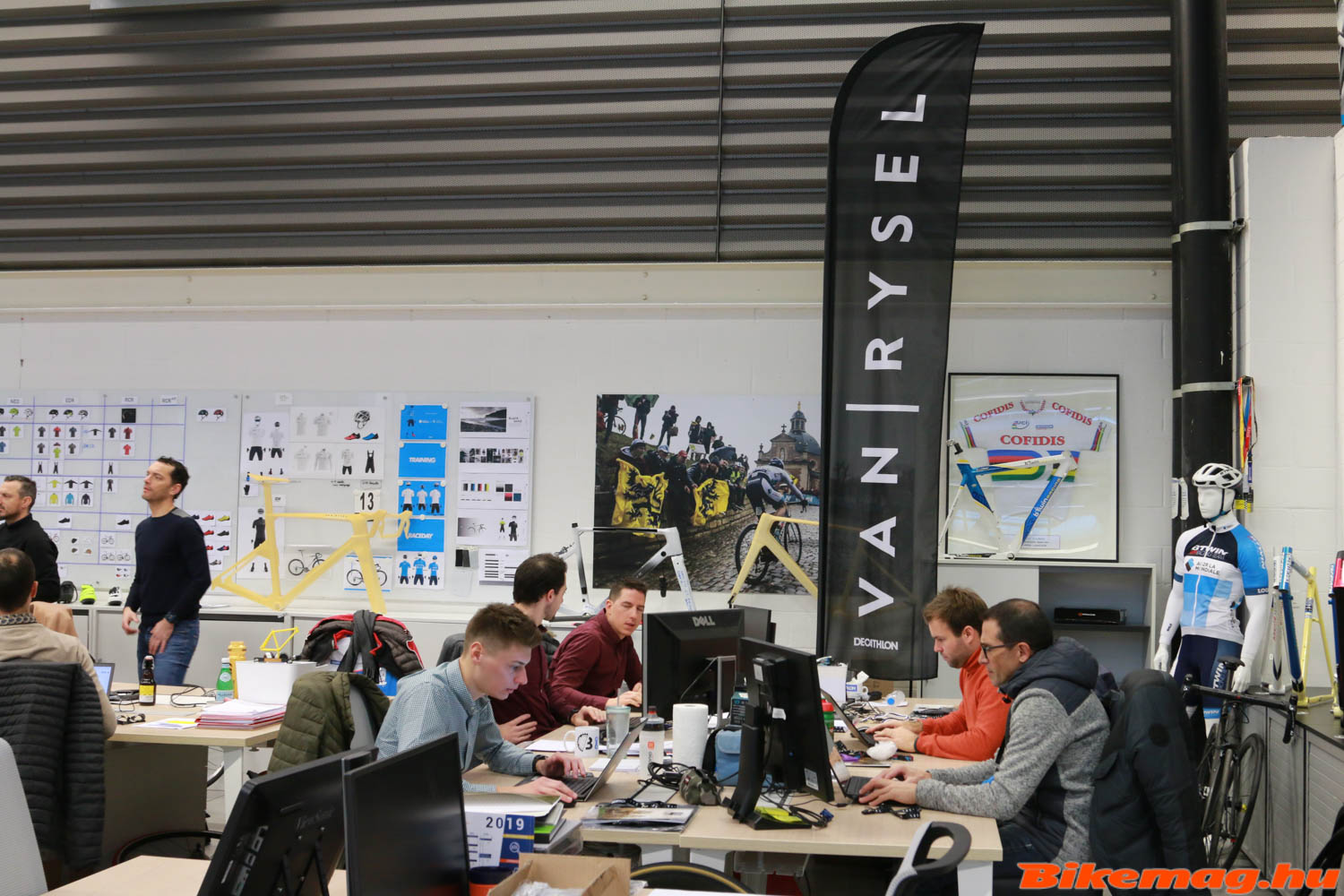 We were presented with the ways his division operates, and how the range of products are developed. To cite an example: a compass used for sports orienteering was designed by his colleagues, who then travelled to China to finish the project in cooperation with the local manufacturing partners. They came home with several product prototypes from which the team selected the ones which are not sold in Decathlon stores all over Europe. Although he only oversees of the cross country and orienteering division, to the best of his knowledge all divisions operate the same way. All products on the shelves in Decathlon have some added value, and higher end merchandises regularly gets full in-house design.

The next day – as it was a Sunday – instead of visiting the headquarters, we were invited to visit the Velofolies bike exhibition in the nearby Kortrijk, Belgium. Two of the most recent addition to the Decathlon bike range were introduced at this well-known event. In the afternoon we had a chance to test ride the new bikes, so a report can be expected in the near future. There we met the head of the bike division at Decathlon, and learned a lot more about the brand’s goals and strategies. 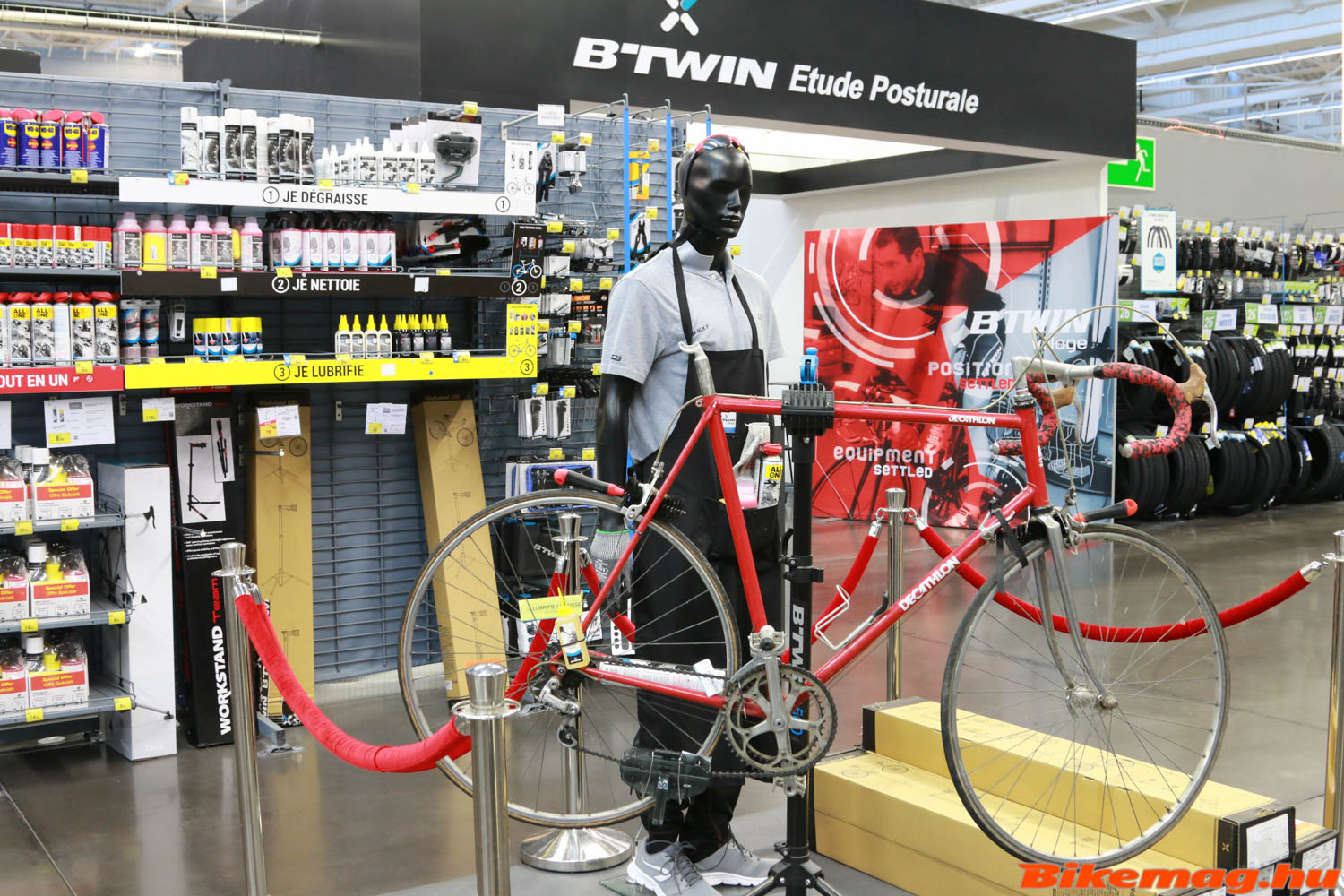 Decathlon has been selling bikes for decades!

It was only at the end of our stay in Lille that we finally managed to get inside the B’twin Village. The cycling mega store didn’t grab my interest, on the other hand the testing facilities and R&D department proved to be a great revelation. Undoubtedly Decathlon has the largest range of bikes and accessories of any sporting specialist in Europe, and this location presents all currently available goods from each and every market. Yet I’m surrounded by bikes in my job, so the magnitude of merchandise is not something to write home about. So I was quickly off to the other side of the premises where bikes and accessories were conceived… 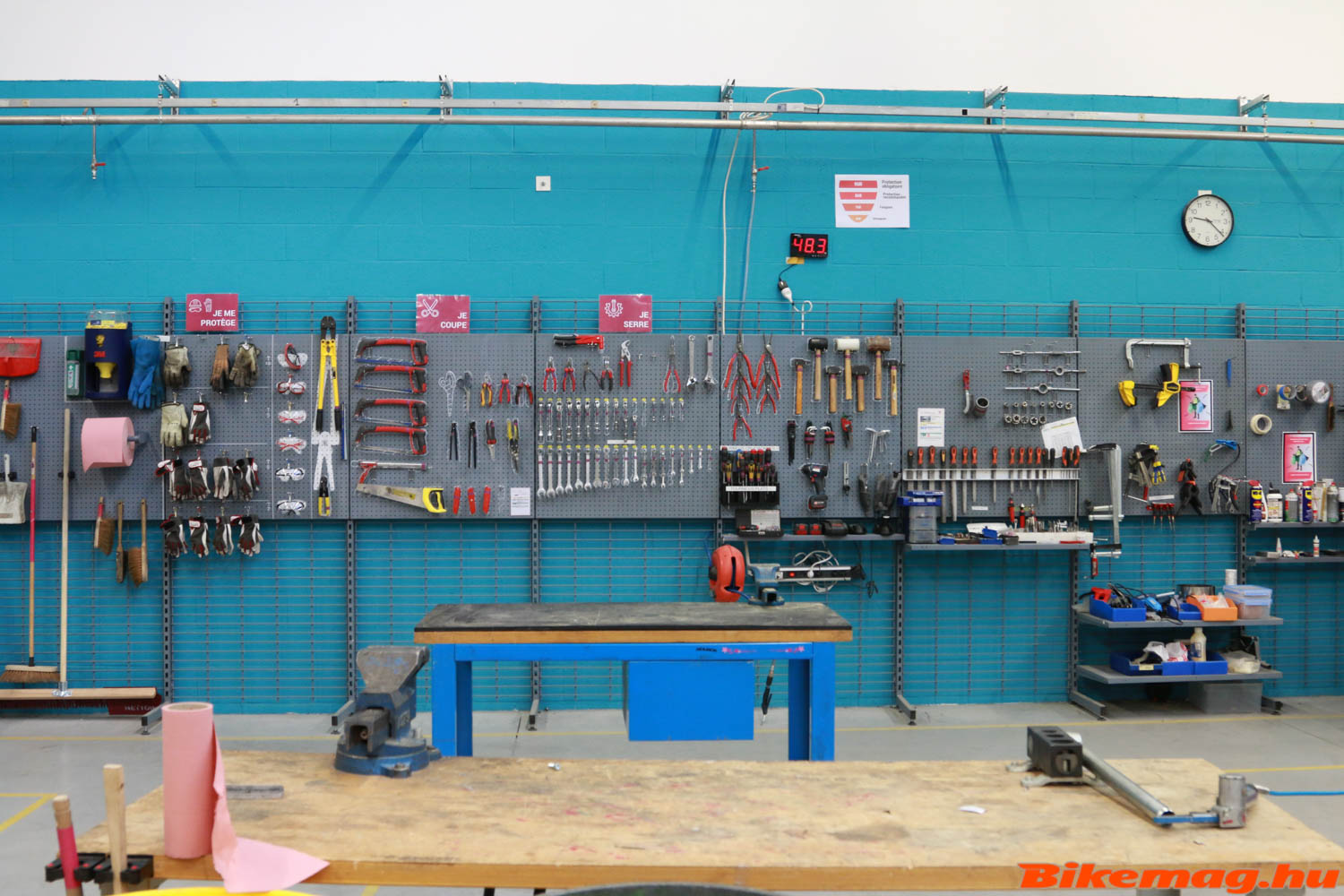 This is where the prototype bikes are assembled

As the secret vaults of Decathlon headquarters were opened, I realized that all we told about in-house design is in fact a reality. The specious offices were full of staff – especially women –, and we could get a glimpse of how a new product was born. I have visited headquarters of several large bike brands, where only a fraction of employees carried out all duties including marketing and PR. Of course a chain of stores should have more tasks to deal with, than a conventional bike brand with no more than a few concept stores. Still, the activity at B’twin Village was staggering! 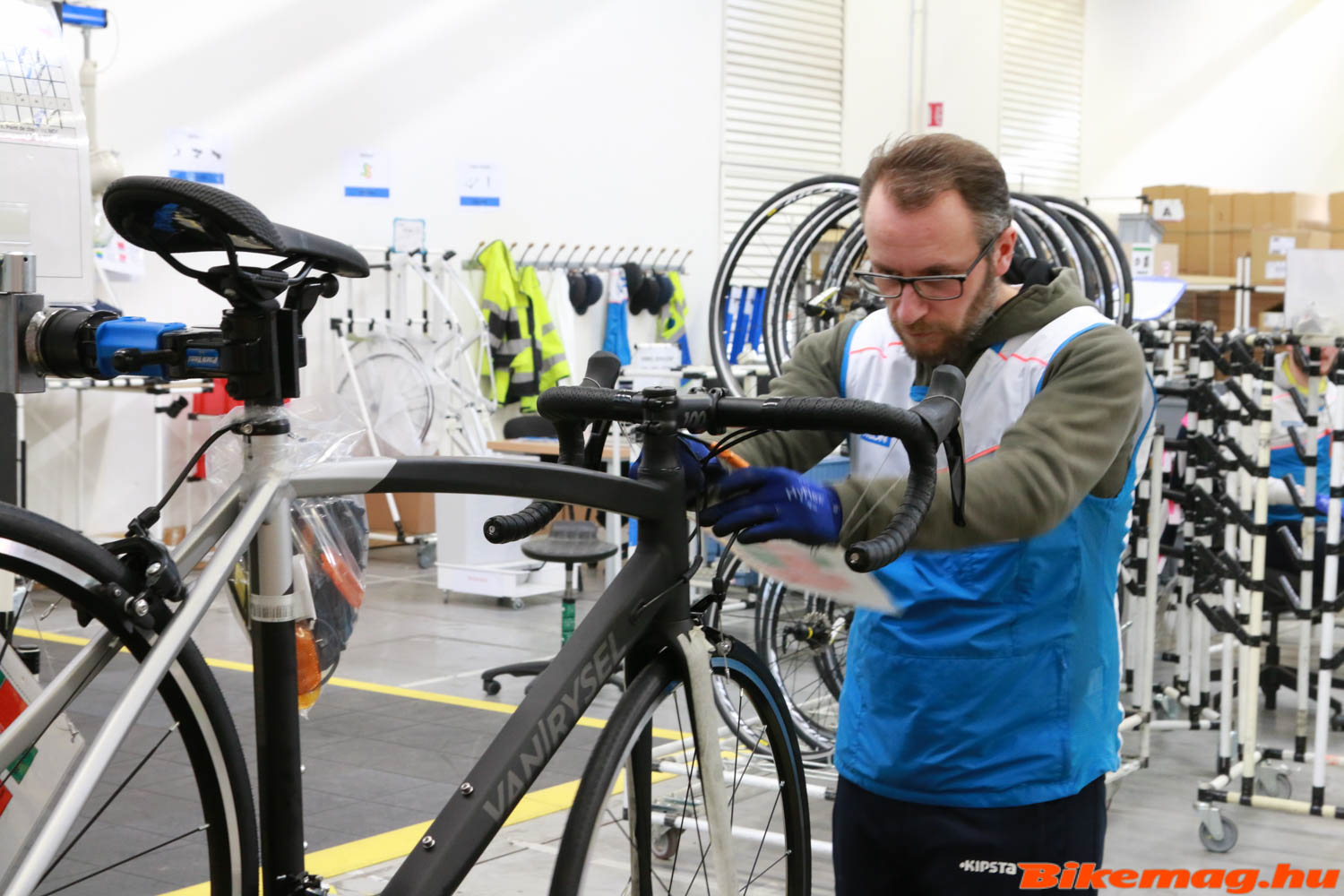 A complete Van Rysel bike is assembled by a single employee!

I also had a chance to visit the testing laboratory where failure tests are conducted on bikes and parts. I have seen many such facilities at various bike brands, and have to say that Decathlon has one of the highest level of testing infrastructure I have ever witnessed! Each and every product they put on the shelves are tested for several qualities. It’s usually done at the prototype stage, but random quality control testing is also carried out on the laboratory. The staff was willing to answer my questions related to the technical aspects of testing, making it obvious that this facility has a genuine purpose, – or to paraphrase – the development of the products are done by experts and not by the marketing team. (In the series dealing with Decathlon I’ll dwell on this topic, and show how some of the bikes and products are created.) 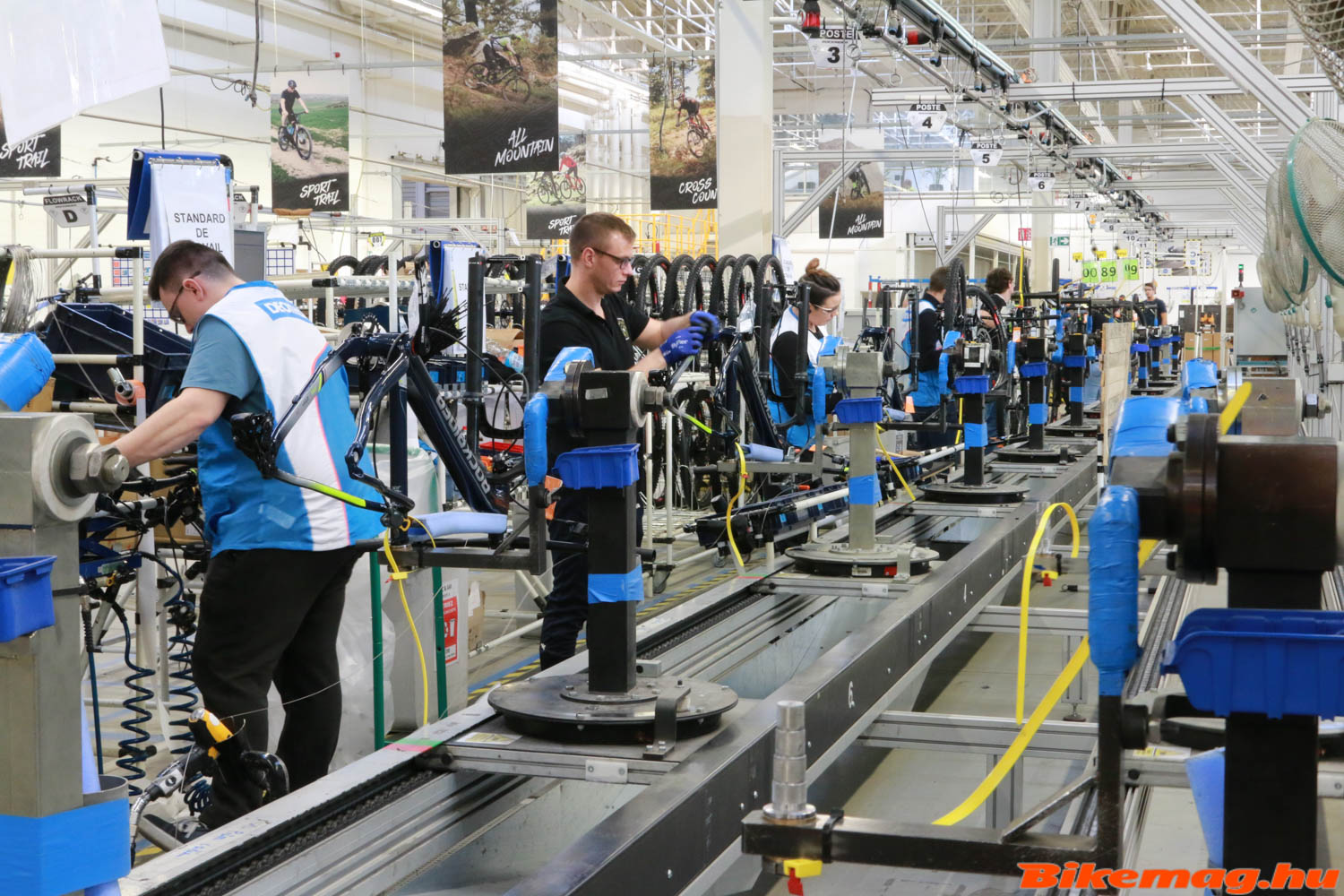 Behind the B’twin Village we find a bike assembly line Decathlon runs to create finished bikes. (There are further locations in many parts of Europe where bikes are assembled.) An the plant I was stunned to see the unique production method where each and every bike was being assembled from start to finished by one worker. At factory assembly lines, one worker carries out only one part of the process: in Lille, the emphasis is clearly on quality and workmanship. This is true for most high-end bikes sold at Decathlon. Although production time is greatly increased, the employee carrying out the assembly is responsible for bike as a whole. Another advantage of this fabrication method is that incidental problems surface quicker, so the management can make changes in production before a larger batch of bikes are finished. 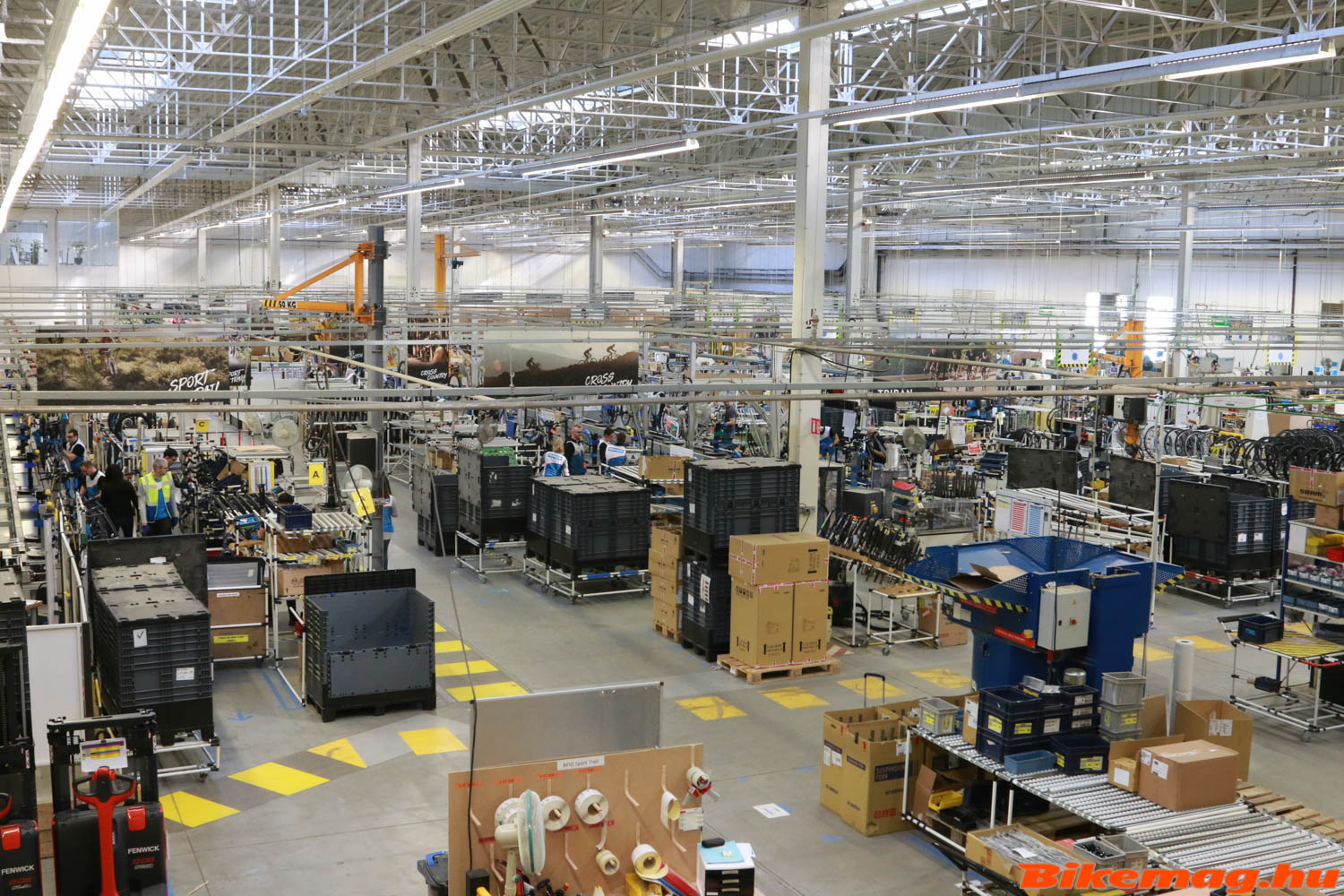 During our three days in Lille, we had a chance to see and experience many aspects of Decathlon’s operations. We witnessed how the bikes are designed, tested, assembled and presented in the stores. The mentality I saw is quite different compared to both international bike brands and businesses in Hungary. It seems employees enjoy working at Decathlon, and their work environment reflect this impression. (Incidentally the company has been voted “Best workplace” for many years running in Hungary!)

As an economist, I’m baffled by some of the production techniques I witnessed in Lille. They are certainly not the most effective ways of making bikes, but I seem to work for the given workforce and environment. Neither the price, not the quality of the finished product suggest that there is anything to fault with Decathlon’s business strategy. Moreover, now we know for sure that their bikes are designed and built by competent people, who pay great attention to the rider’s needs and expectations.

I hope this write-up serves to dispel some of the misconceptions regarding bikes and accessories offered by Decathlon. We plan to continue the series by giving more insight into how bikes are designed. In addition I’ll report on the new bicycle brands Decathlon introduced in 2019, as well as giving my impressions of the bikes I had a chance to test ride. 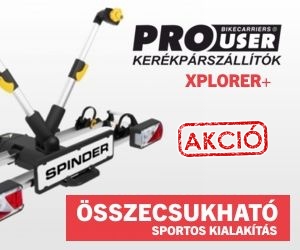