Last year saw the launch of Giant’s first true gravel bike, the Revolt Advanced. The world’s largest bike manufacturer did not for play small potatoes when introducing brand a new offering in one of the most popular segments of the current market. The Taiwanese developers went all out with a carbon frame construction packed with proprietary technology. The Revolt Advanced turned out to be a great bike, I must admit that for me it trumps all the models I have had a chance to try in this bike category. 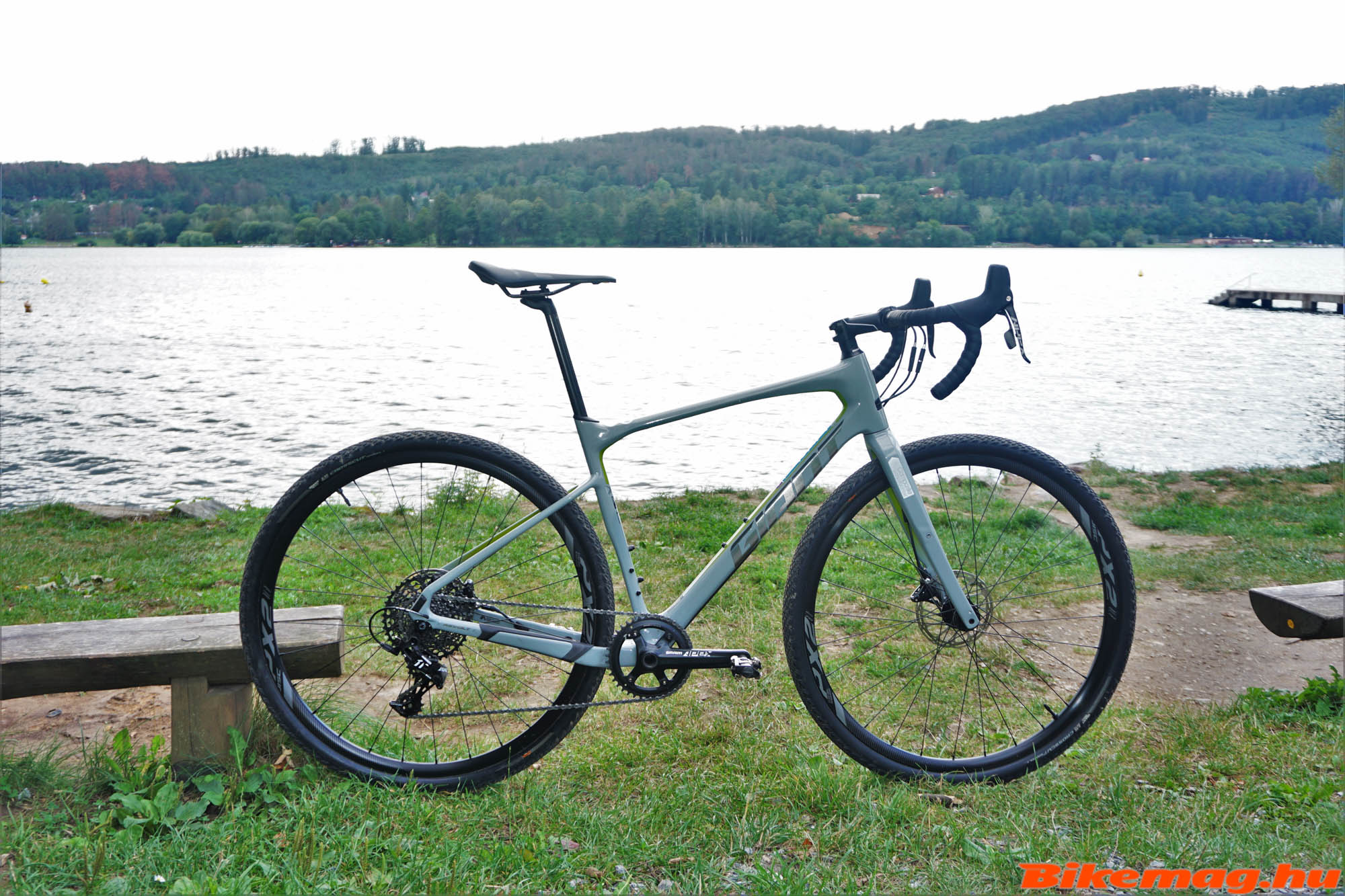 The first official mention of the Revolt Advanced came in our write-up about the launch of the new 2019 Giant bikes.
In fact, the publishing date the above-mentioned article had to be delayed, since we had to wait for the official introduction of this model. There the Revolt Advanced was displayed, but could not be ridden at the 2019 product launch. Since then it arrived in the stores, and was also added to the list of bikes available for review. Now we finally had the occasion to carry out a proper test ride at the 2020 Giant product launch held this summer in the Czech Republic. 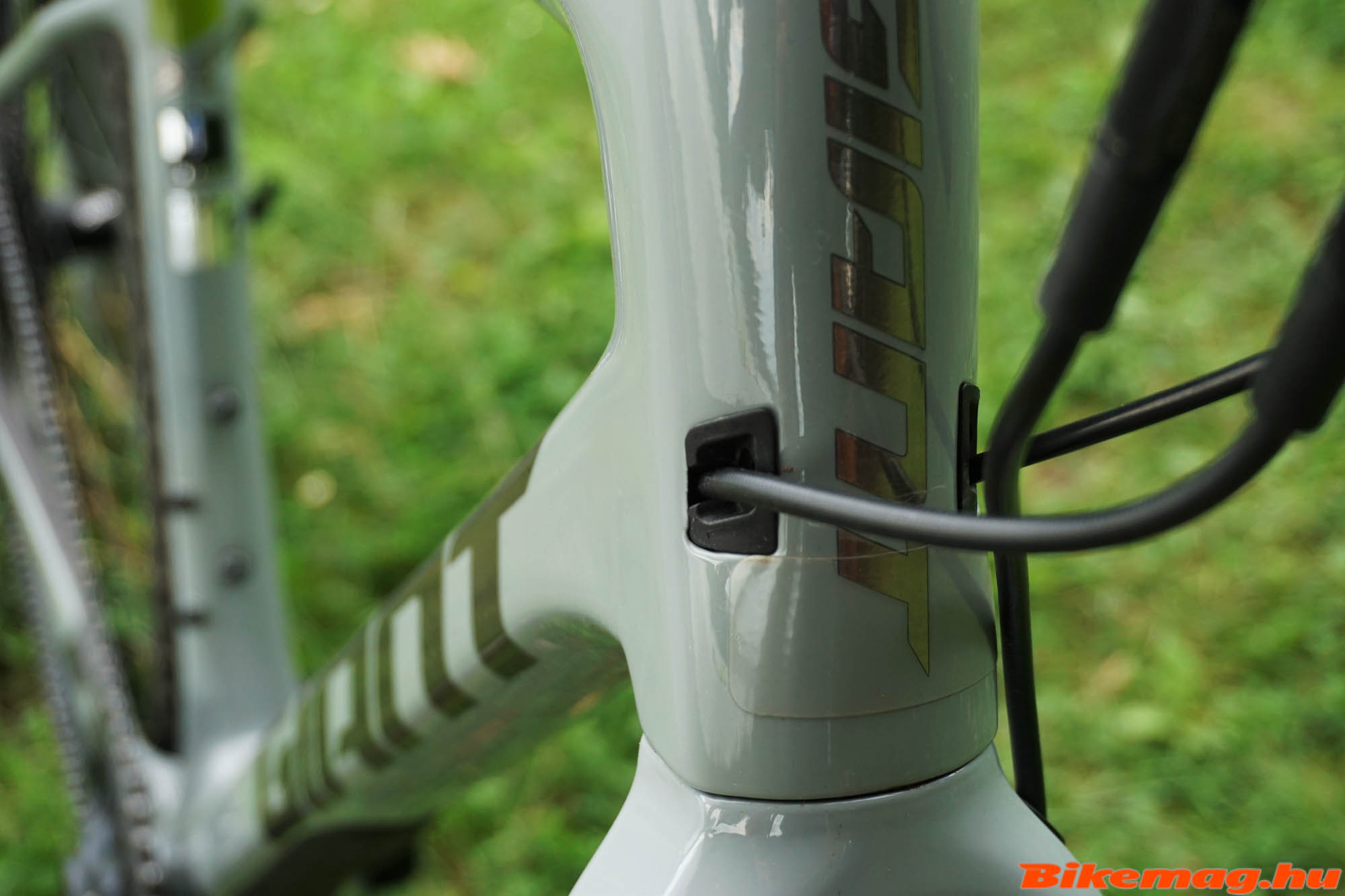 Some readers may point out that the Revolt Advanced is not actually the first gravel bike in Giant range, since in the marketing literature the Toughroad model – which we have tested and reviewed on these pages – is also categorized a gravel bike. But we should note that the Giant Toughroad was not designed as a gravel bike, since this bike category was more or less non-existent at the time it appeared on the market. With the emergence of the gravel scene Giant needed to put something in the new category, and the all-road touring oriented Toughroad seemed the ideal choice. Giant put a drop bar on these bikes for its gravel line, but the frame design stayed more or less the same. The matter of fact that the Toughroad works quite well as a gravel bike is a welcome concurrence. 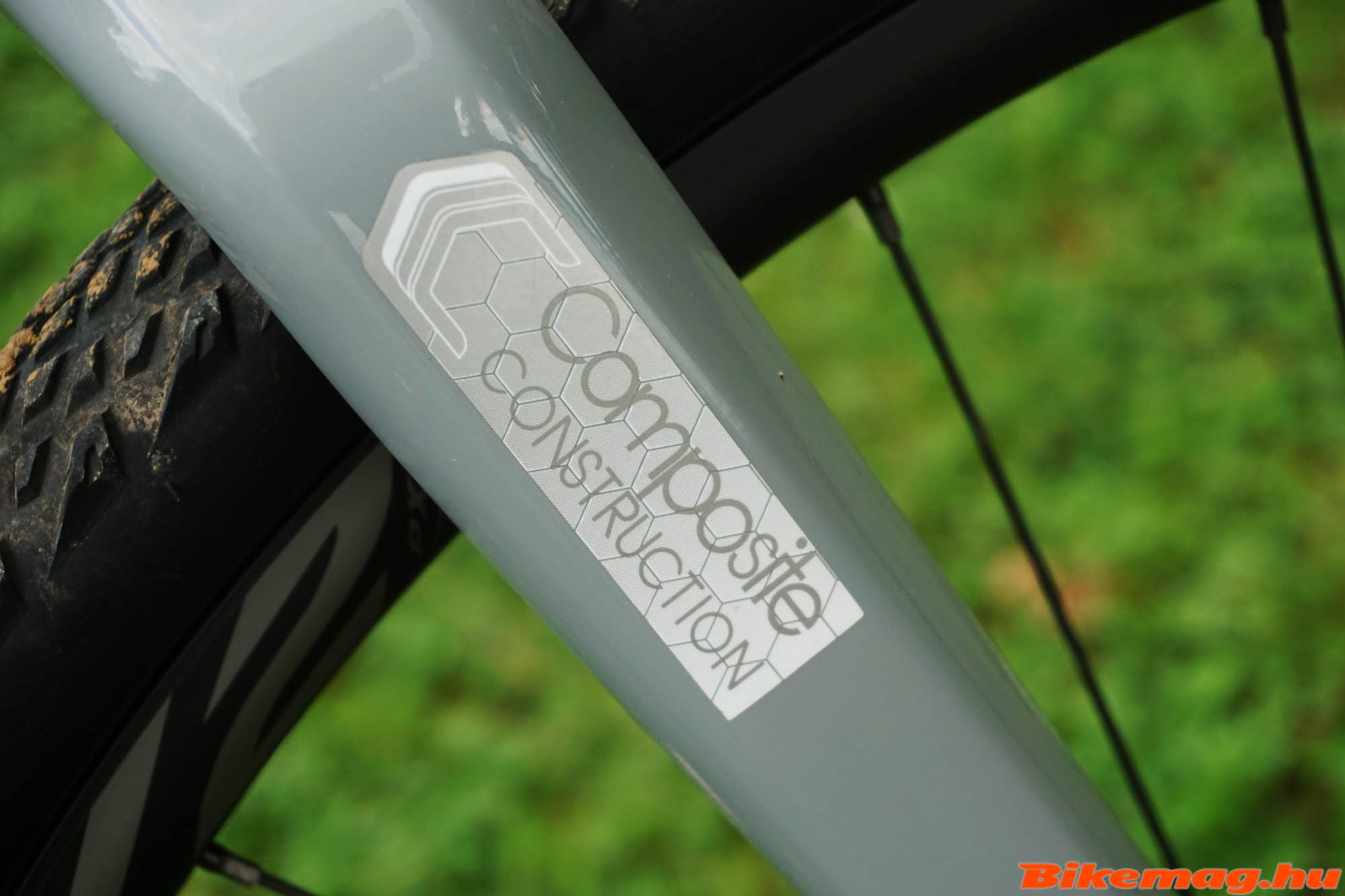 On the contrary, the Revolt Advanced is a purpose-built gravel machine. It was developed especially for this newly found segment of bike riding. In comparison to the Toughroad, it has no flat bar touring version per se. Another important piece of information we learned at the 2020 Giant product launch is that the Toughroad model will be completely replaced by the new aluminum version Revolt. (Yes, you hear it first here: the Revolt Advanced will soon be joined by an aluminum model variant!) 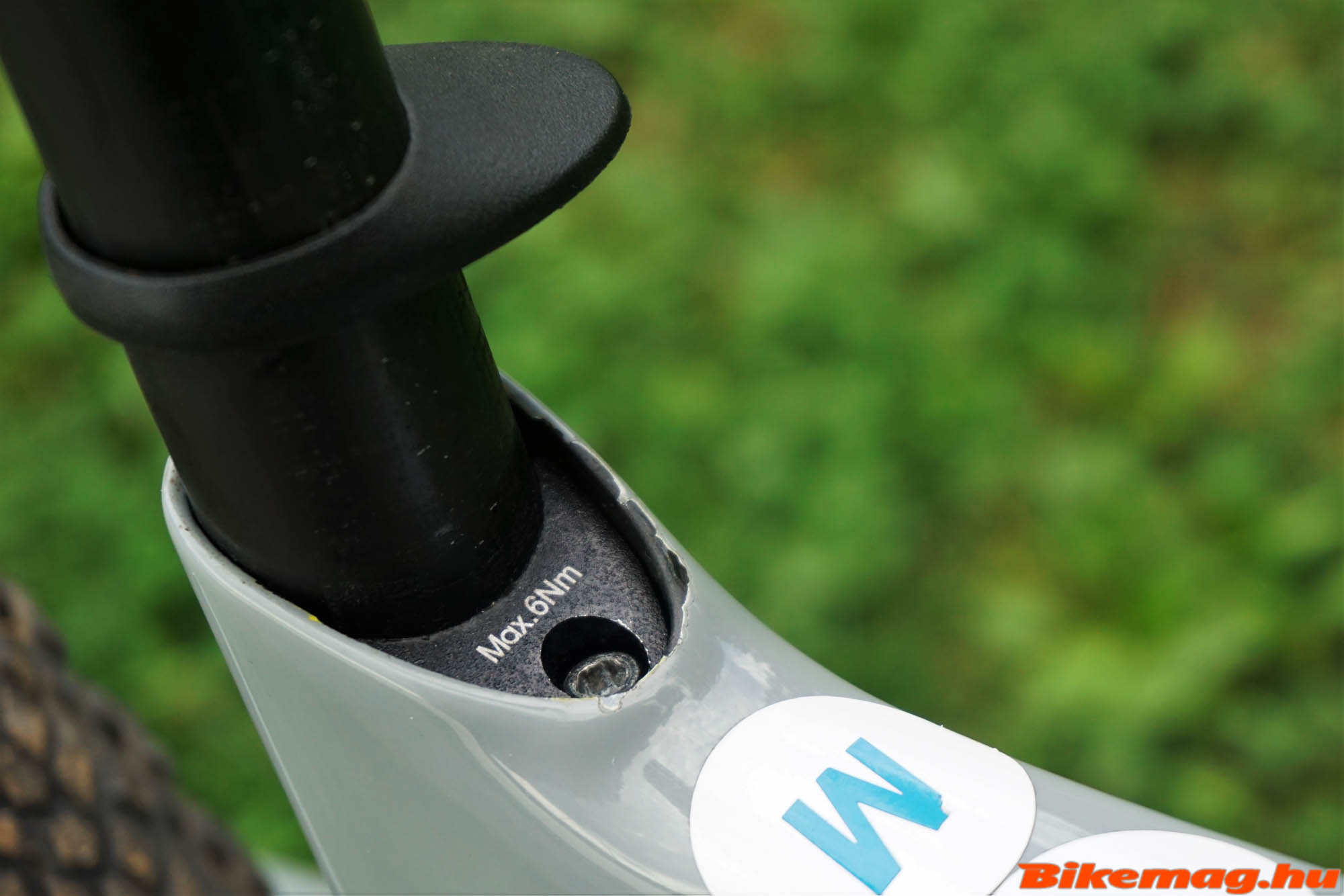 The Revolt model name carries the “Advanced” label, which a significant technological attribute at Giant. It’s the short form for “Advanced-Grade Composite”, denoting the fact that the frame is manufactured from hi-tech carbon fiber material. The “Advanced” is the second-tier technology at this Taiwanese manufacturer, positioned below the “Advanced SL”, the high-end carbon material the top-class road bikes are made from. As the Revolt Advanced is not a bike designed for professional racing, there is no need to employ the more fragile, extra lightweight technology of the SL variant. 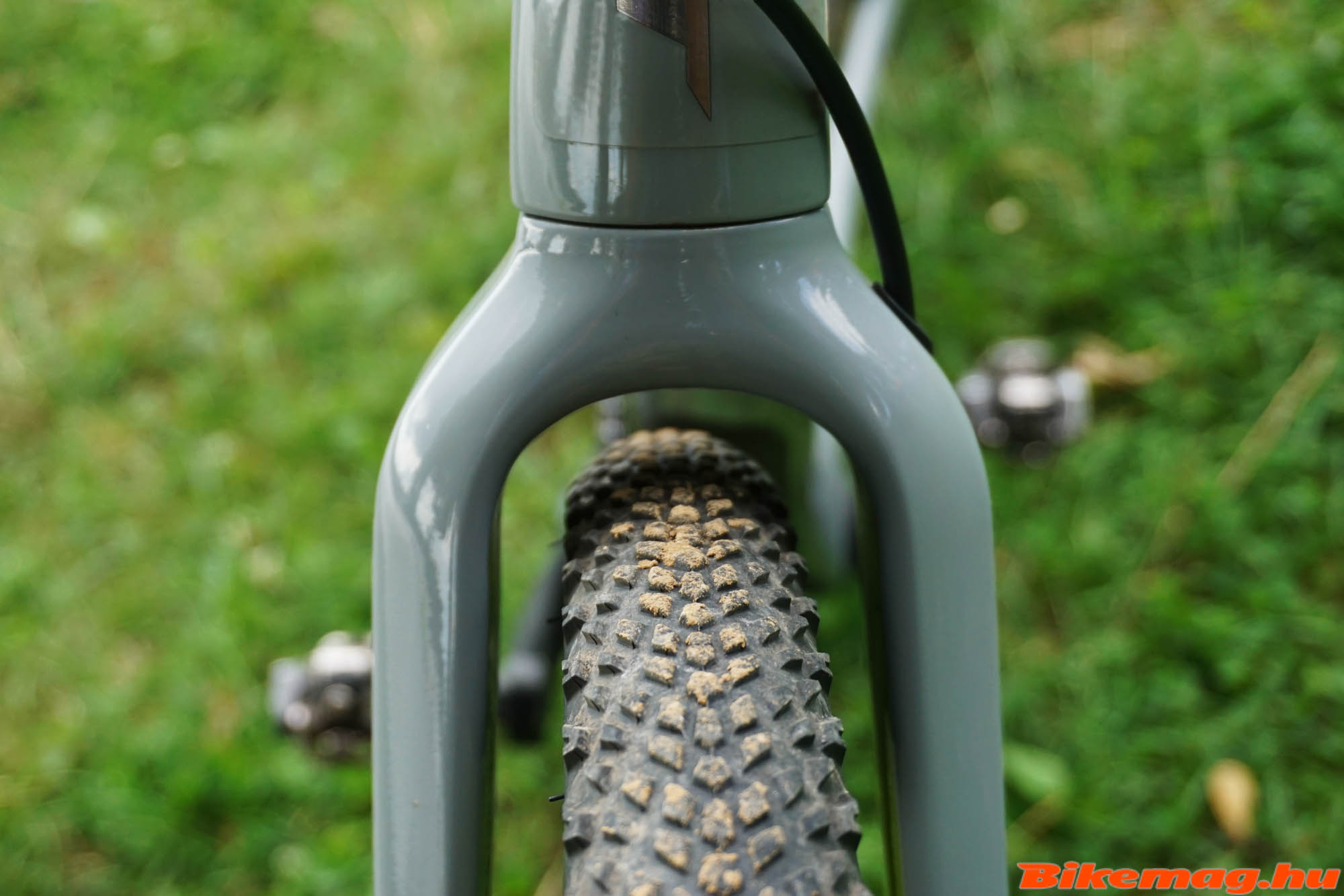 The Revolt’s frame is reminiscent of the Defy model, which we have also tested and reviewed this spring. It shares many of the design features and technologies with Giant’s endurance road bike. First of all the seat tube cluster of the two bikes are very similar, and the seat post clamp mechanism is more or less the same as well. It’s a particular wedge style design, something which only seen on Giant bikes. The seat post has the D-Fuse design just as in the case of the Defy. As we’re observing the rear end of bike, I must mention that the Revolt features only the basic attachment points for the fenders (mudguards) and a rear rack. In case of the Revolt the Taiwanese brand hasn’t gone out of its way to allow a full setup of bikepacking gear. To tell the truth, the full array of braze-ons is not something I need on my gravel bike, and I believe the majority of Revolt users won’t miss them either. This is a performance-oriented bike and not a bona fide tourer. Probably the aluminum version of the Revolt will feature all the bell and whistles in this regard, as do the most recent gravel bikes from most manufacturers. So I see the Revolt Advanced’s minimalist approach more of a virtue than a deficiency. 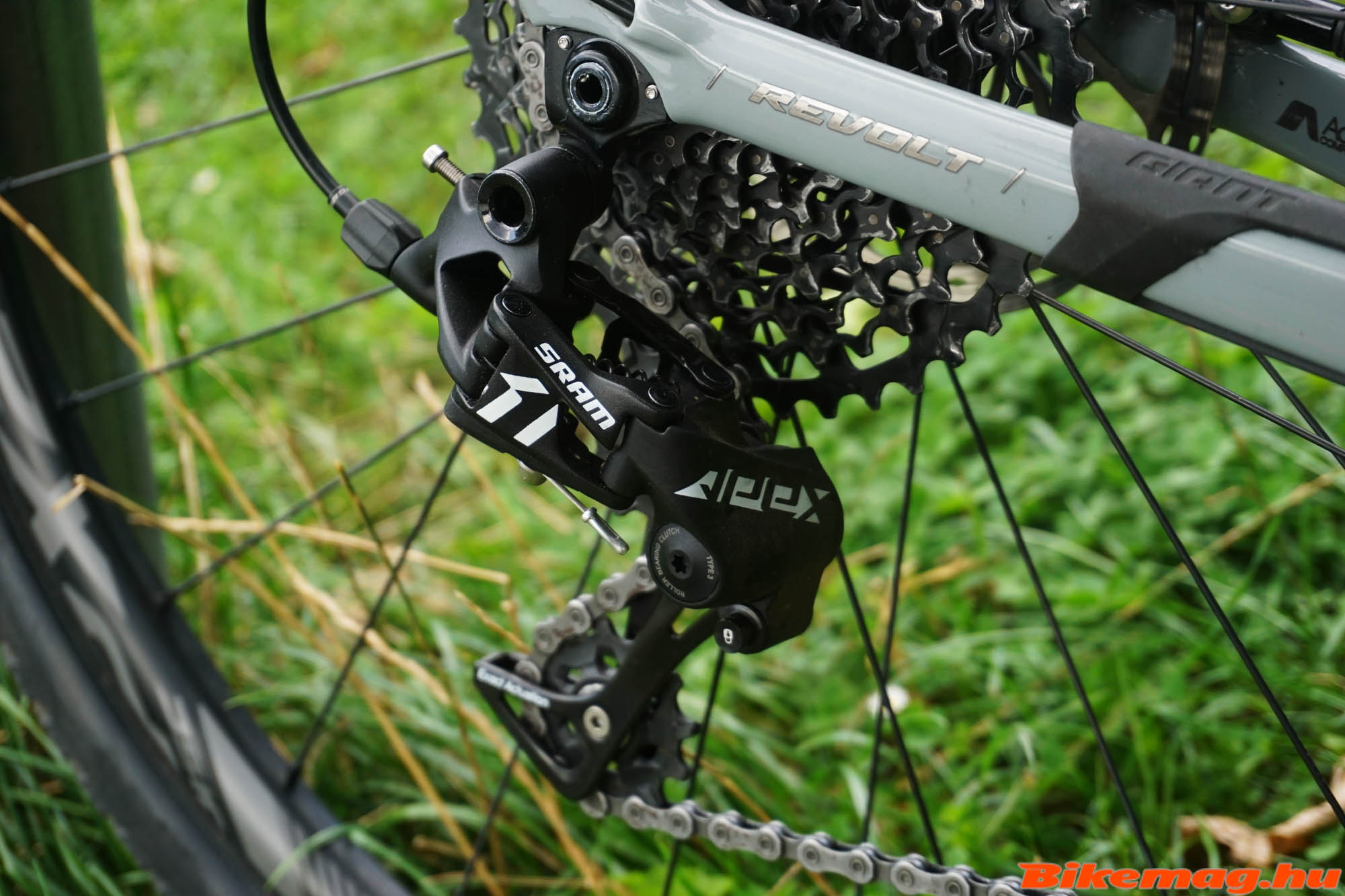 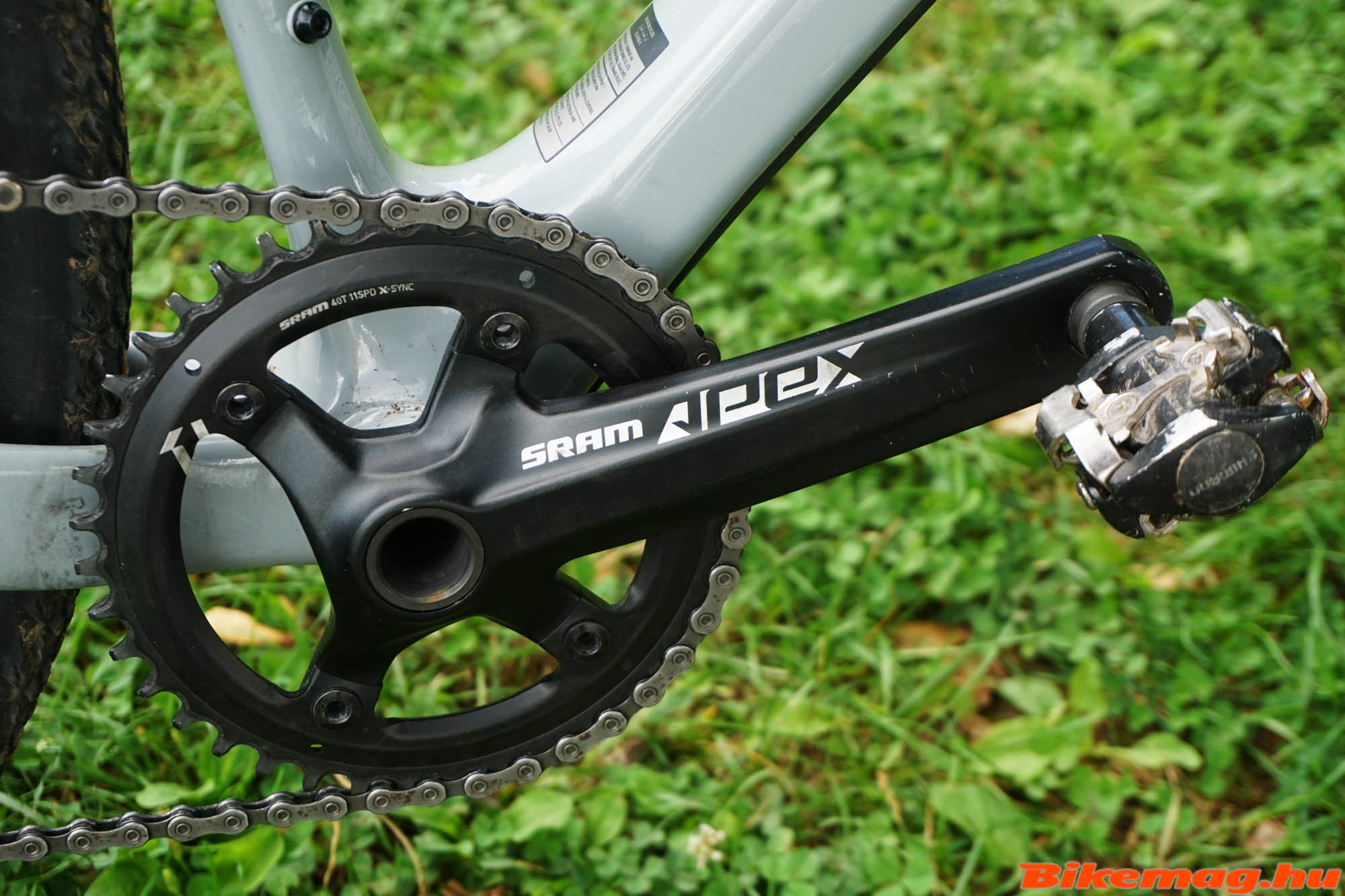 The Revolt’s sport-oriented character is noticeable in other ways as well. Just like with most Giant performance bikes the frame geometry is sportier than what’s we generally find on the market. Looking at the geometry charts we see that the head tube is only a tad longer than seen on the road bikes, the chain stays are also quite short, the head tube angle is in the goldilocks zone, rather than taking to extreme shallow as we often get on some new gravel models. This makes the Revolt Advanced more of an all-rounder bike, it’s agile enough for road riding while providing just the right amount added stability for off-road gravel adventures. The handling is also conducive to fast riding, I’d recon few will consider it unwieldly. On the other hand, it provides ample of clearance for fat tires. The manufacturer stating that up to a 45mm wide rubber will fit in both the rear and the front fork. Probably few users will take advantage of this massive clearance, but it’s good to know that you can go extremely wide if truly needed. So we have a bike that possesses manners not dissimilar to endurance road bikes, while offering the possibilities of proper off-road adventures. 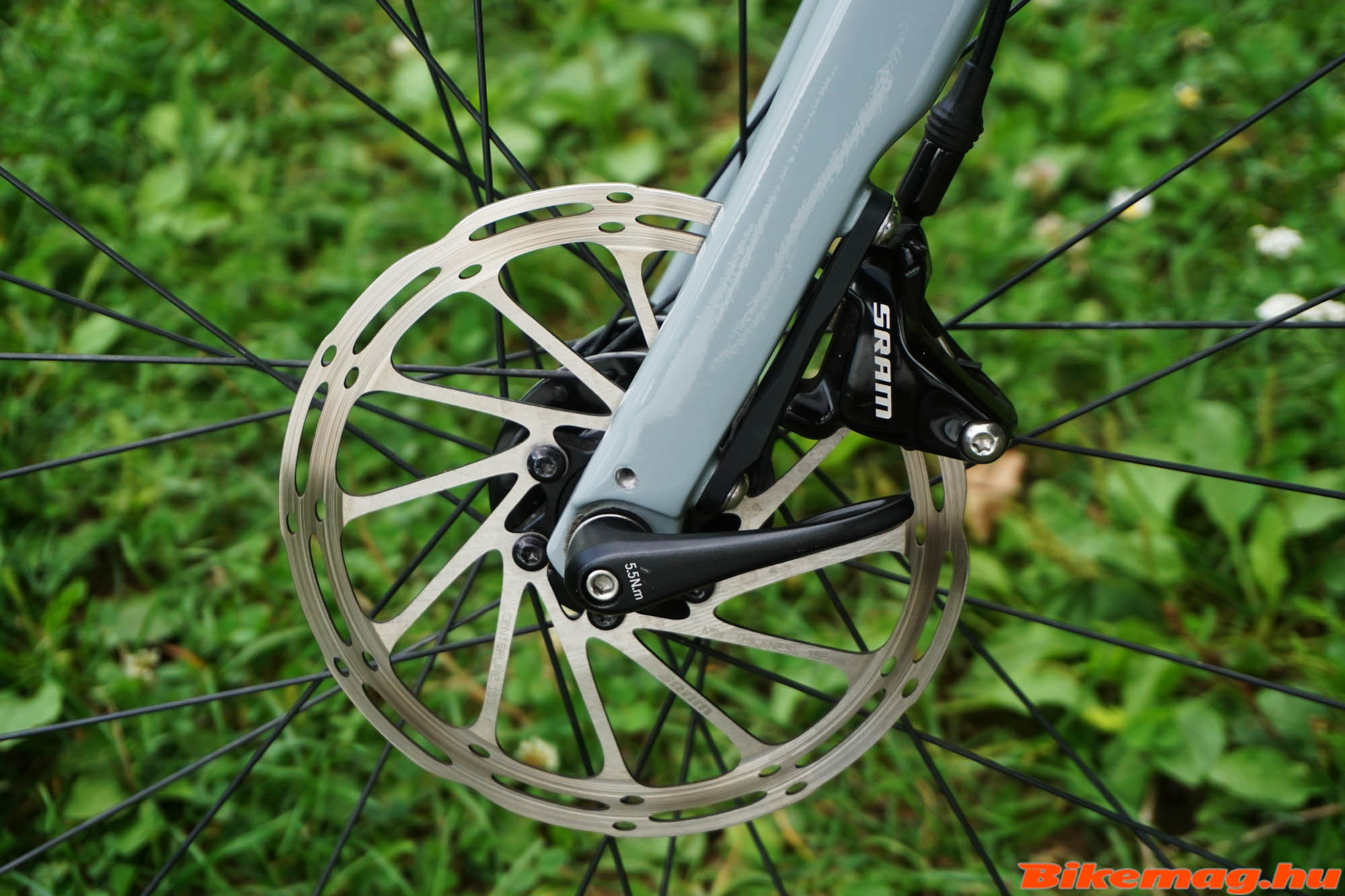 Our 2019 Revolt Advanced 1 comes with a complete 1×11 speed SRAM APEX component group set offering a 40T chainring in front paired with a 10-42T cluster at the back. This provides a wide gearing range making the bike suited to many different riding applications. This component group also features hydraulic disc brakes which is the norm nowdays on performance-oriented gravel bikes. 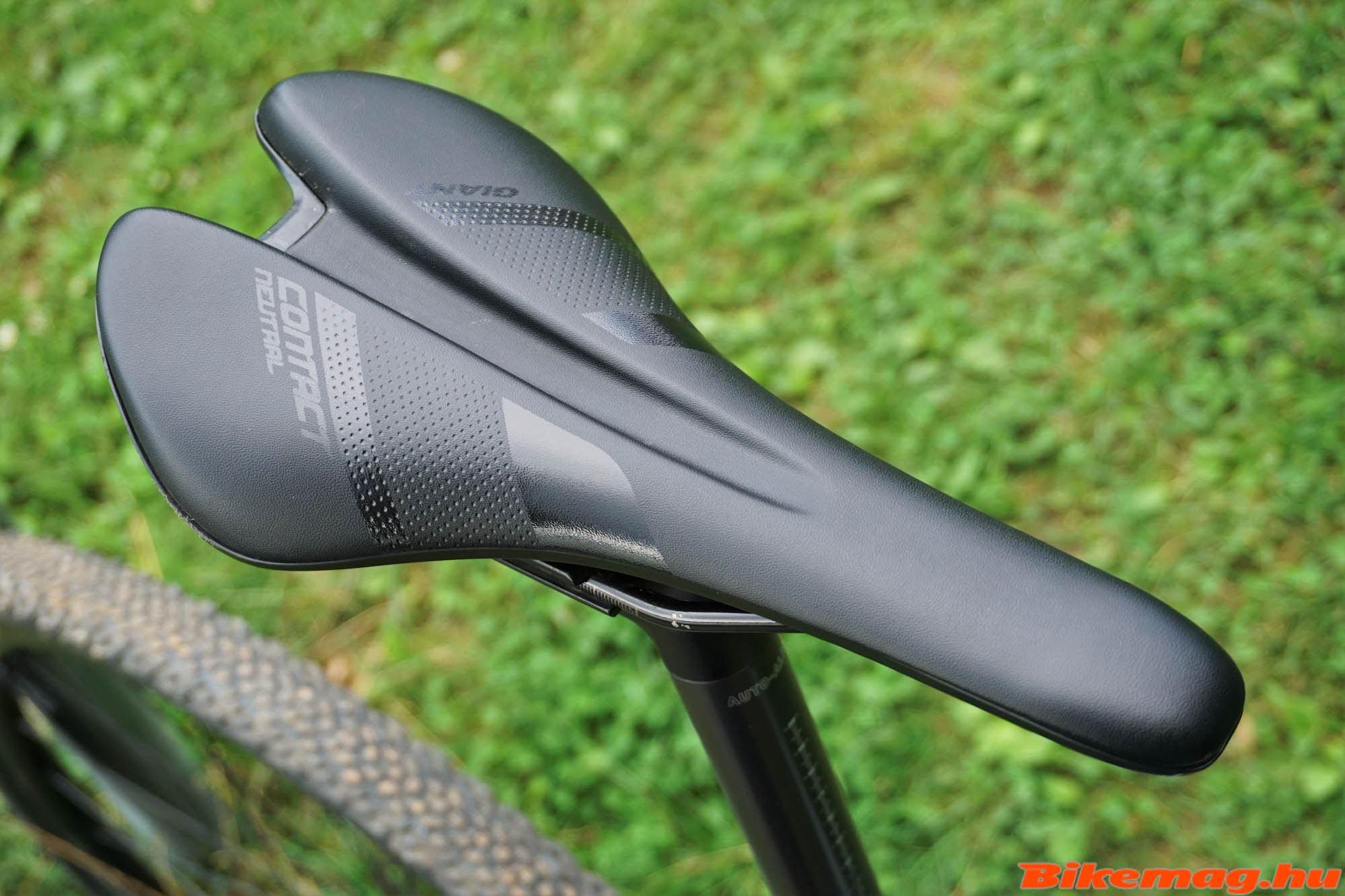 The rest of the equipment on this test bike is from the manufacturer’s own range, including the P-X2 wheelset and the Giant branded tubeless tires. We should note that the Taiwanese manufacturer was one the first to offer tubeless wheels on their bike range, and presently most bikes come with all the accessories to make the tubeless setup possible from the first ride. The rest of the parts on the bike also from the Giant component range. But there is a difference to other manufacturers who may merely stamp their logo on the parts: being the largest bike manufacturer Giant has the resources to put in development and design work into them. Hence instead of a generic seat post in the frame, we get one with Giant’s special D-Fuse technology, which offers more compliance in one direction for added comfort while providing more stability to resist the loads exerted by pedaling the bike. Hence we enjoy better power transfer paired with a tad more comfort on rough road surfaces. 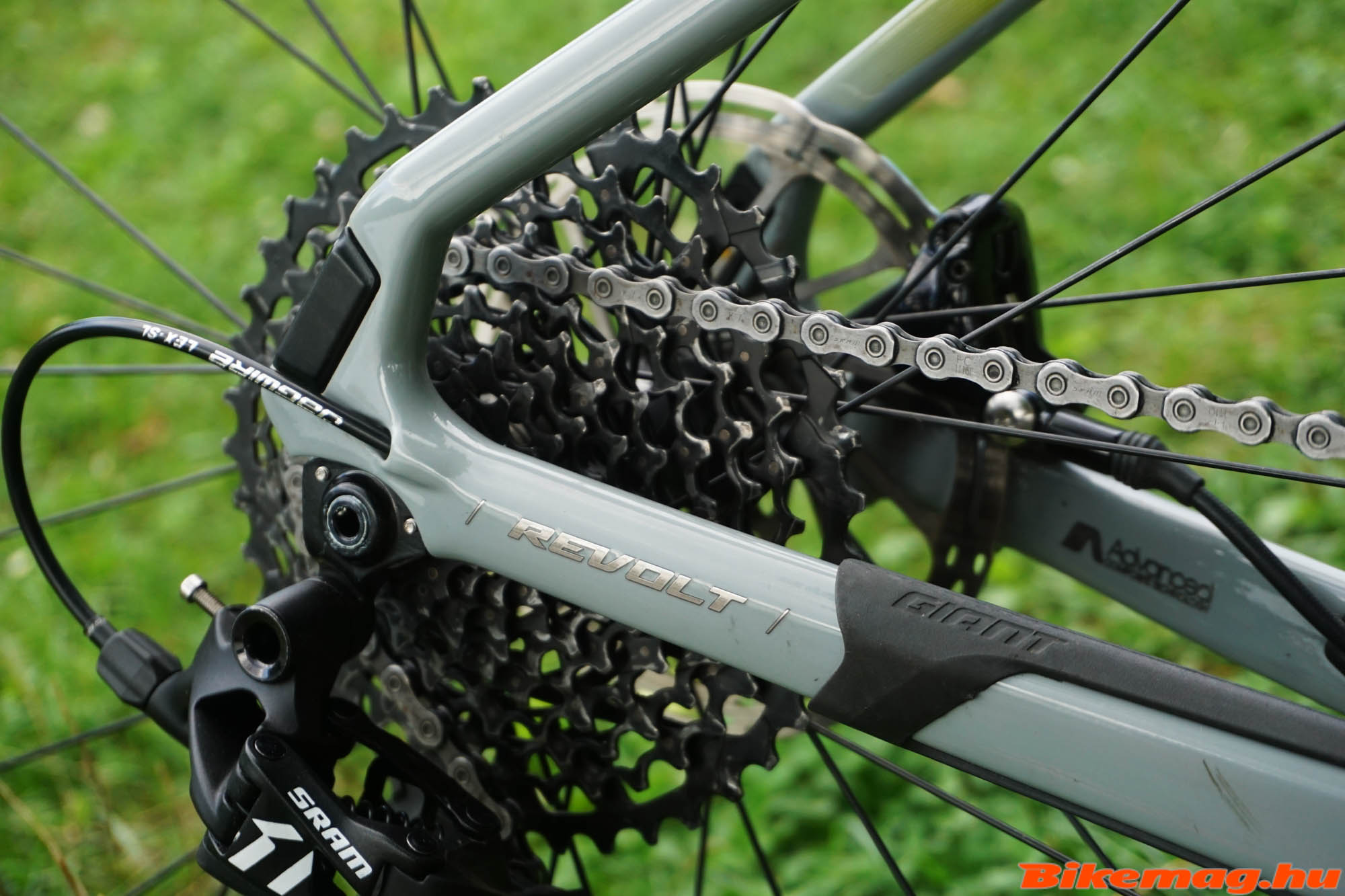 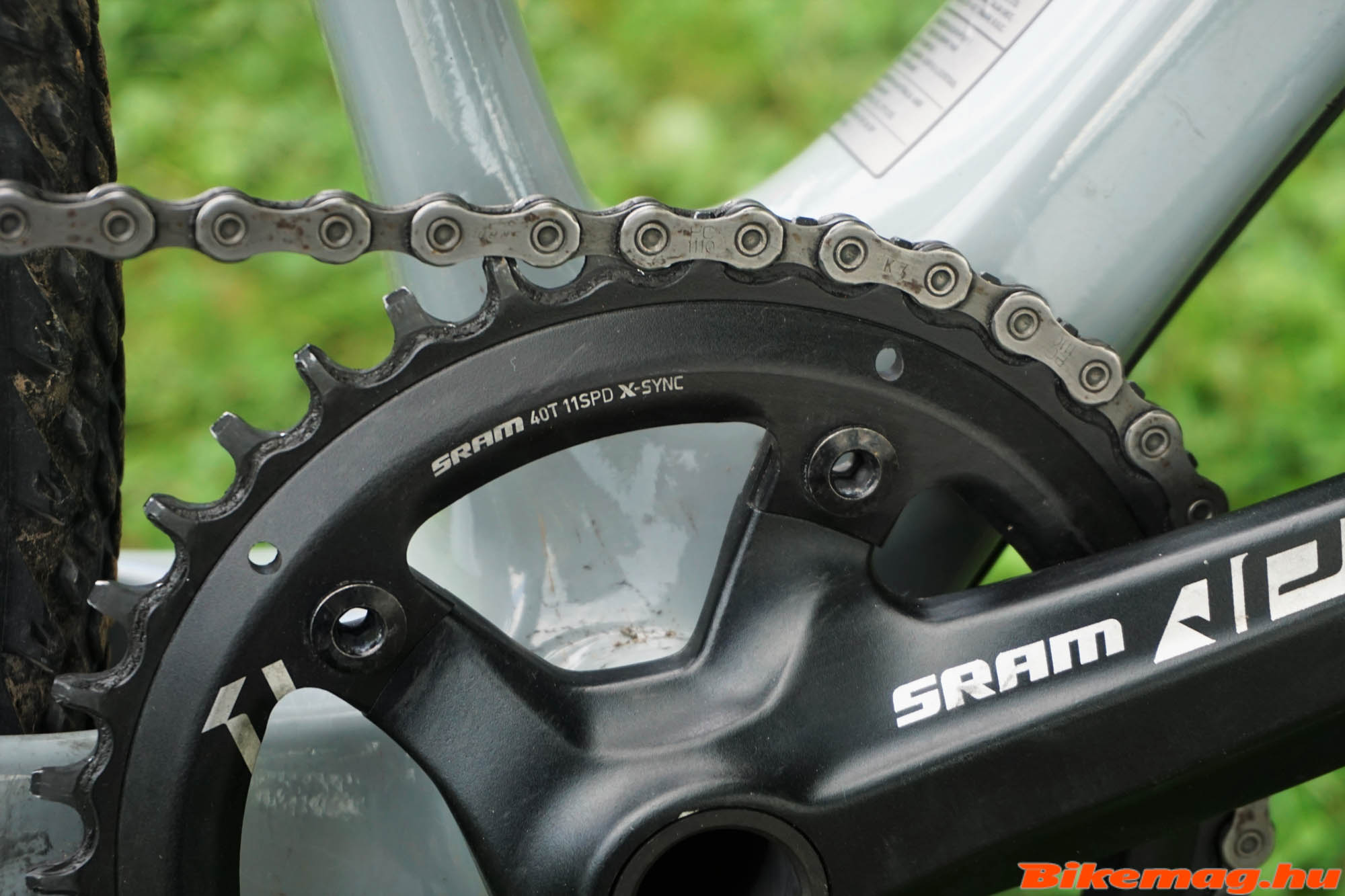 When setting up this test bike I made the necessary adjustments: I set the seat post height and the saddle setback, but chose to leave the handlebar position in the original position. If it was my own rig, I’d move the shift levers higher on the handlebar while lowering the drops. But in this case I’d have to redo the bar tape to perform this adjustment. Since the position was in the ballpark for comfort and stability, I left it as it came out of the factory. On the pictures it looks a bit odd, but I could live with it. When you purchase this bike in the shop, the mechanics will be able to make the right setup for your requirements. The Revolt Advanced is a bike that enjoyed from the first pedal stroke to last, and I was sad when it had to be returned to the distributor. Riding this bike was like hopping on my own esteemed gravel steed. In fact, it was better in more than many respect. The handling is sufficiently fast and agile, the turning circle is much tighter than on some gravel bikes, which tend to mimic an 18-wheeler these days. The carbon frame provides adequate comfort, while also offering respectable pedaling efficiency. In fact, I felt the drive effectiveness felt better than on the previously tested Defy road bike. They share many attributes, but I’d prefer the Defy to be more “Revoltish”! Despite the sporty frame geometry, the Revolt Advanced is quite stable and predictable off-road, making even steep descents a possibility. On one occasion I managed to ride a technical drop littered with roots where some mountain bikers in front of me were carrying their bikes. The 40mm wide tubeless tires helped greatly, but this experience just confirms that the bike itself is apt to take serious off-road conditions without much difficulty. In addition, I enjoyed the sheer dynamism of the Revolt, its explosive reaction to pedaling. Most gravel bikes these days place more emphasis on comfort, hence they tend to have slow steering and are sluggish when reacting to drive input. It seems Giant engineers managed to bridge the gap between the endurance and gravel bike segment, hence allowing the Revolt to offer adequate comfort while behaving like a performance-oriented road bike when it comes to reacting to hard pedaling efforts. If I could only have one bike in my possession, I wouldn’t hesitate a bit in choosing the Giant Revolt. On the other hand, I’d prefer it to have a double chainring setup with Shimano components. So it was no great surprise to learn at the 2020 product launch that next year will see most of Revolt models with exactly the setup I outlined above. The bikes will offer an even wider gearing range with finer steps in-between, making both road and off-road riding a more enjoyable. The 40mm wide tubeless tires will remain, which make this model ready to handle most local off-road trails. In fact, one could relatively easily complete many of the MTB marathon events in its saddle. 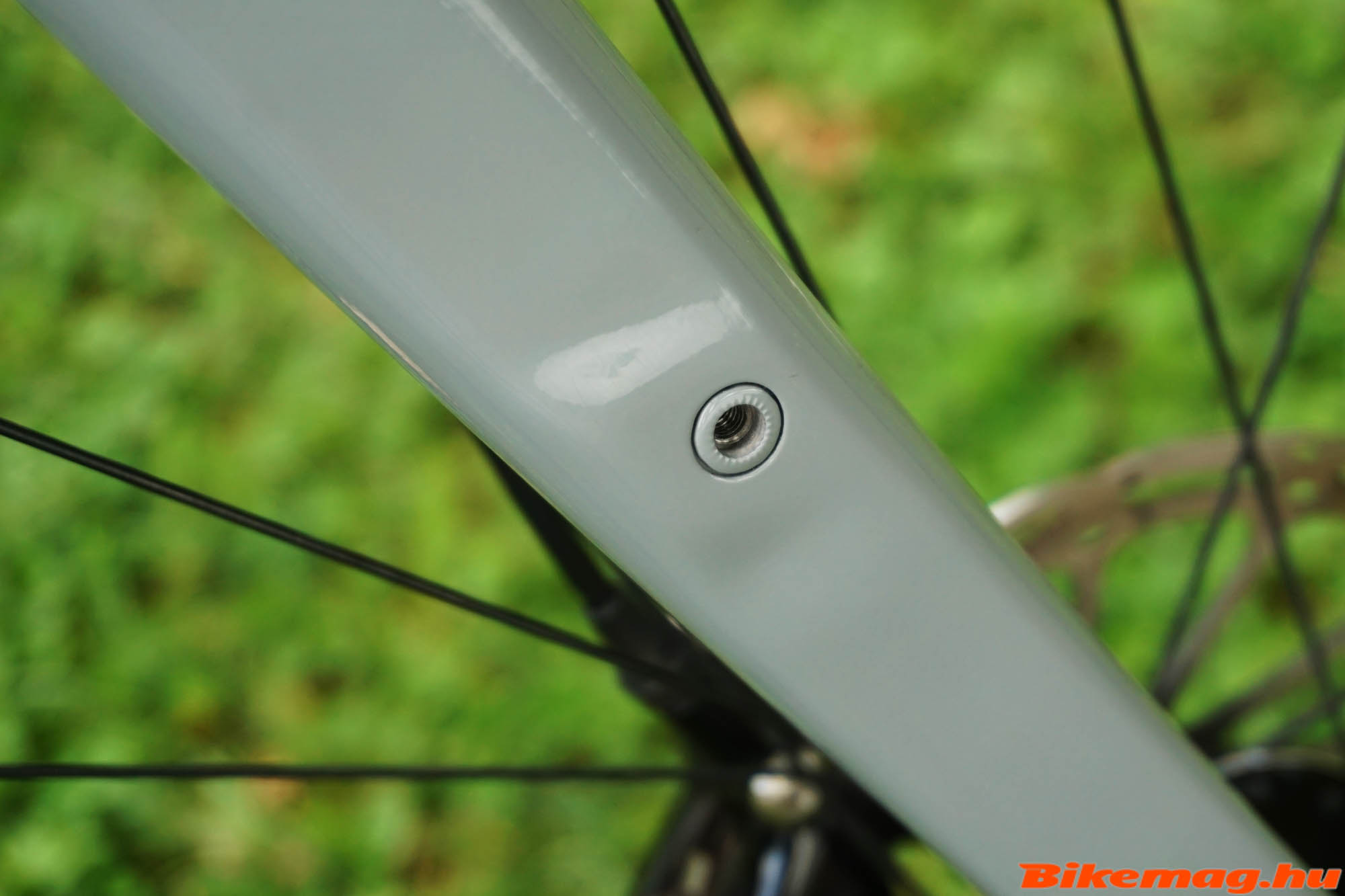 Naturally this bike is more than suitable for bikepacking adventures, as it accepts accessories needed for such usage. Nevertheless, I question why one would choose this bike over the less expensive gravel model for this application. Likewise the Revolt Advanced could be called to do commuting duties as well, and I’d guess some people will choose this path, especially in regions where the higher living standard allows for such extravagance for sake of a faster and more enjoyable daily ride experience. Moreover, the Revolt could serve as a performance-oriented touring bike, ridden mainly on paved roads with occasional stints on non-paved road surfaces. This allows the rider the possibility to extend the scope of the adventure while enjoying the speed, the efficiency and the comfort which a high-end bike the Revolt can offer. As I have mentioned the Revolt will be available in aluminum version from 2020, and it’ll come in three equipment levels (Shimano 105, Tiagra and Sora). The frame geometry will match the carbon version in this review, while offering much better value for money. I expect that it’ll be a big hit with local gravel and adventure riders.

More information can be found on the distributor’s website.