The recently introduced road touring model line from Decathlon became an instant success. The Triban RC520 is the textbook popular all-rounder road bike, a very competitive offering in the budget segment of the market. This bike can be ridden equally well on main roads, county lanes, bike paths, city streets and built gravel and dirt ways. Best of all, you’d will be surprised to learn how little it will set you back! 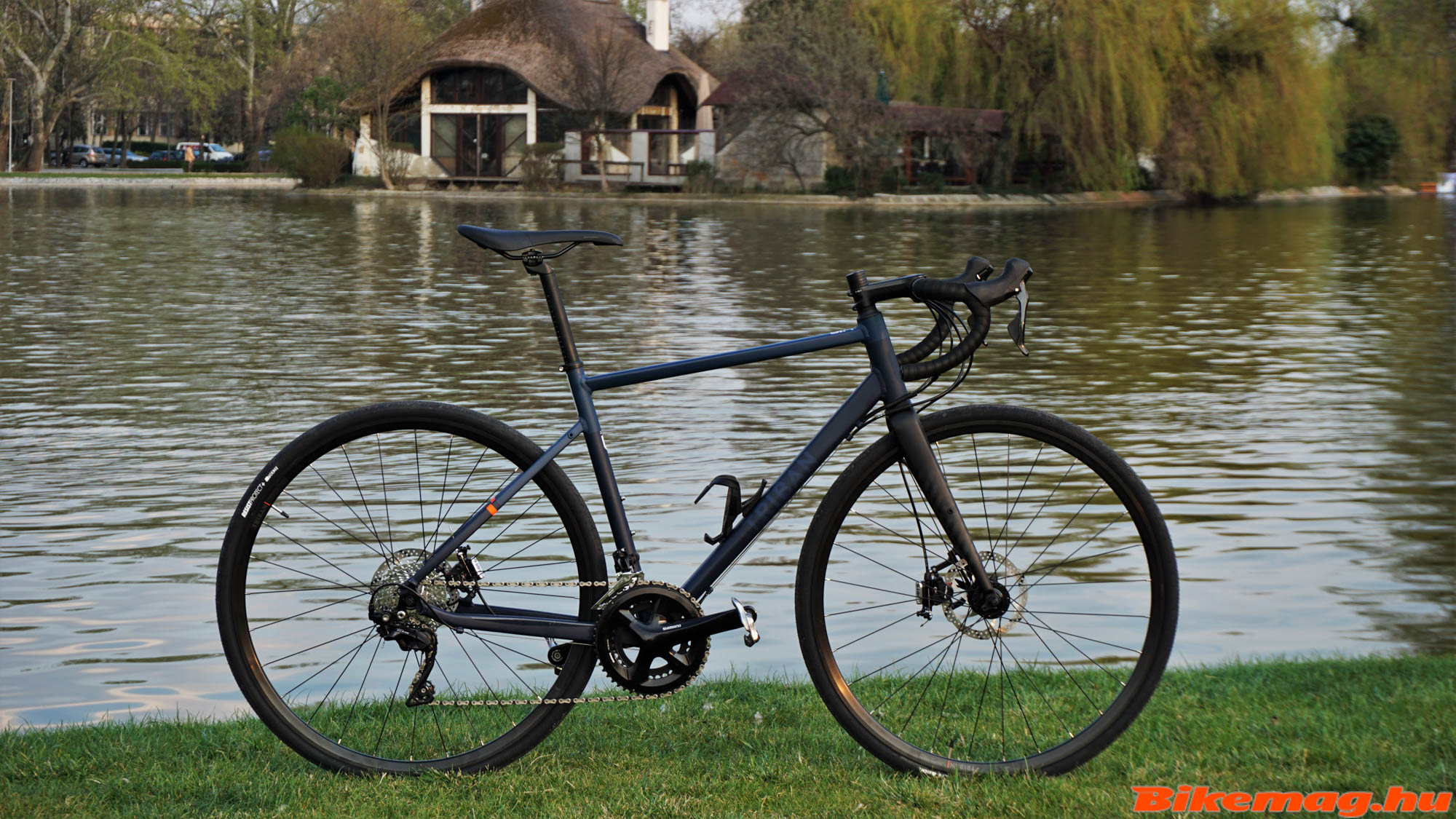 We’ve already made several mentions of the Triban RC520 in our previous articles about the new Decathlon bike range. As of this year the French sporting giant has diversified and segmented its vast range of bike products, and this model is one of the first to be offered within the new handy categorization. 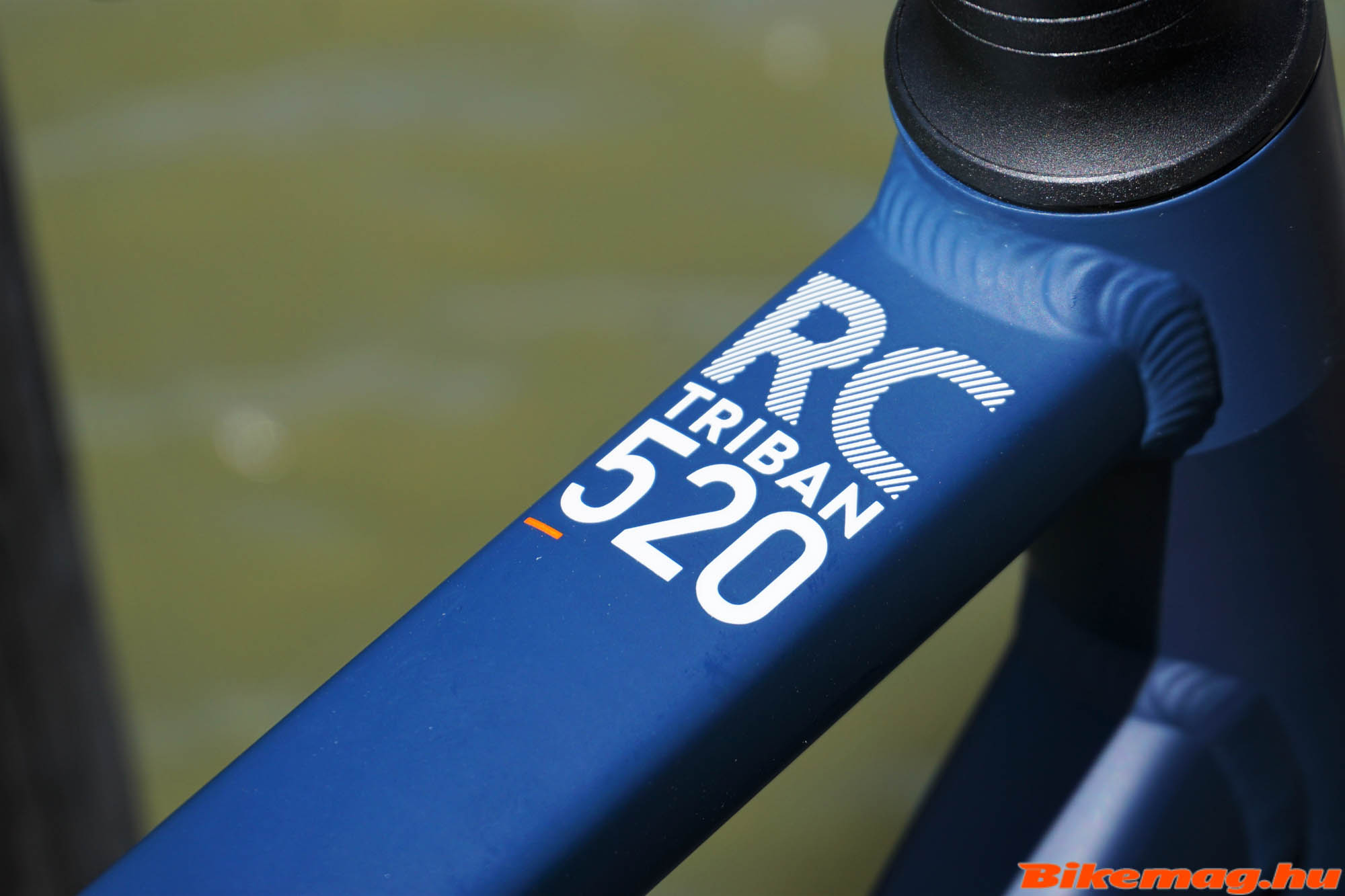 Triban bikes target the leisure segment of the market, they’re designed for customers who mainly ride on the road for the enjoyment aspect of cycling. So we shouldn’t expect to see high end carbon aerodynamic bike designs, since this is not what the potentials riders are looking for. For the more demanding, performance-oriented advanced riders, Decathlon offers the Van Ryel series of bikes and cycling equipment. The Triban RC520 totally embodies the leisure riding concept. Nevertheless, we shouldn’t assume that this model is meant only for newbies to cycling, those who are just getting to know the sport. The mid-level equipment suggest that it’s for the customer is looking for quality parts, who is not trying out cycling at the least expense one could get away with. By the way, the number in the model designation refers to the level of kit. Absolute beginners, occasional riders should be looking toward Triban models on the 100-200 series, the 500 is primarily for the intermediate to advanced riders aiming for a general purpose bike. 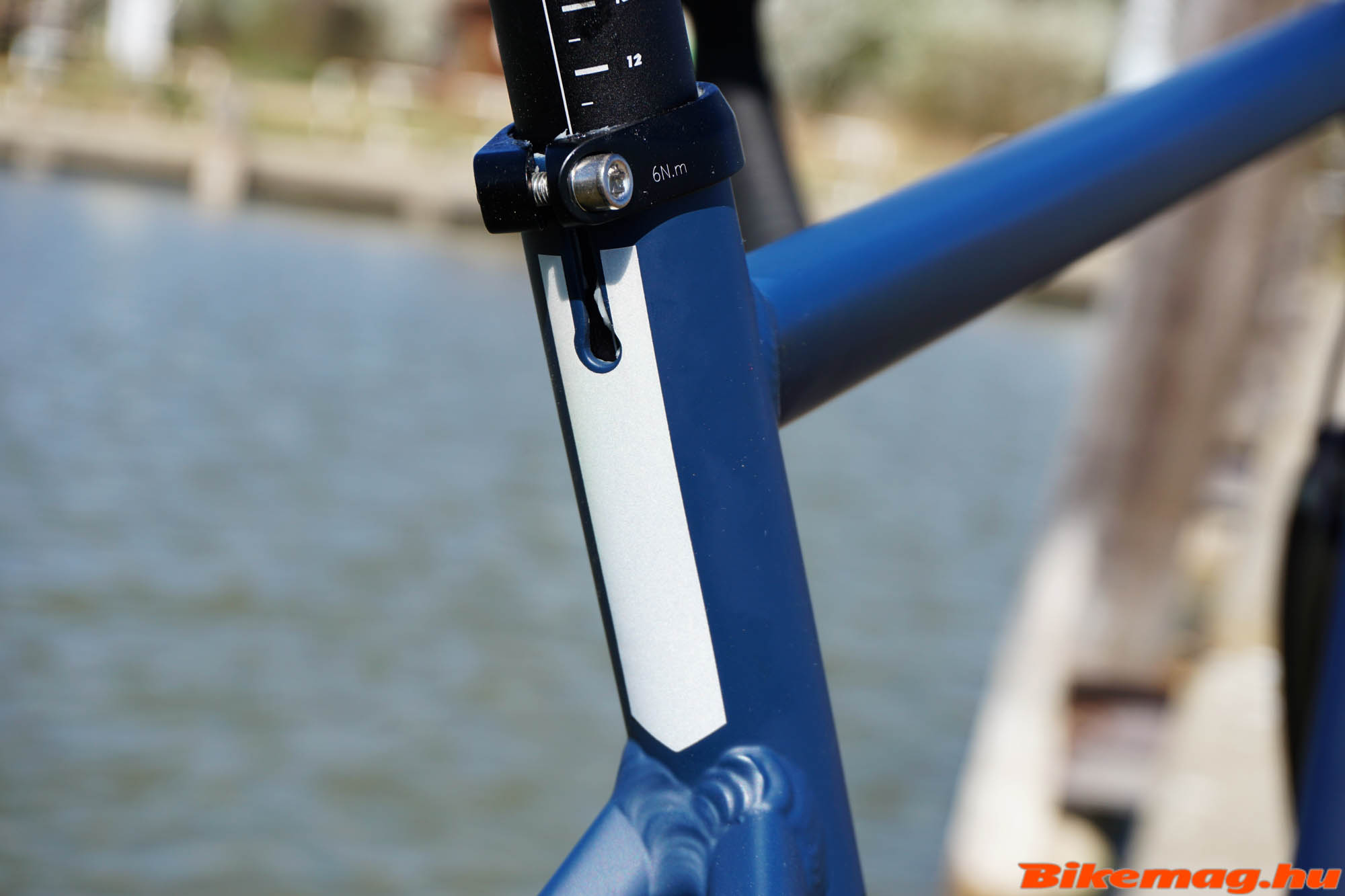 Light reflector on the seat tube for safety.

The Triban RC520 is based on a 6061 T6 heat treated alloy frame set, which is not feather-light by any standard (the manufacturer quotes 1780 grams in size “M”), on the other hand it’s sturdy and reliable. The frame gets a carbon fork at the front which helps to keep the total frameset weight competitive while providing a good level of comfort. At this price level not many bike manufacturers manage to offer any carbon parts at all. Both the frame and fork provide all the necessities to make the Triban RC520 into a great road touring bike. There are mounts for racks and mudguards, so there is nothing to stop the owner to set out on great biking adventures. 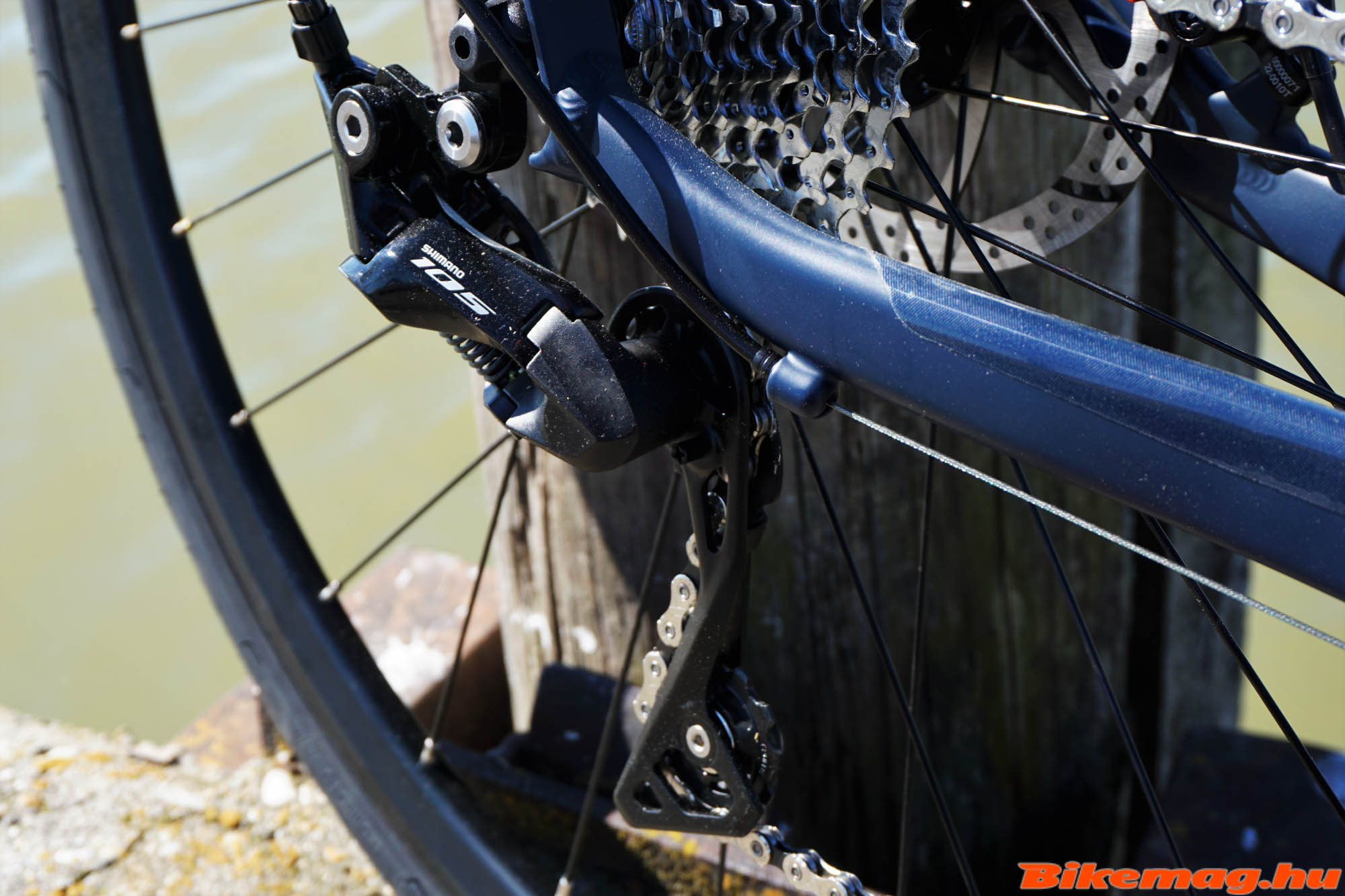 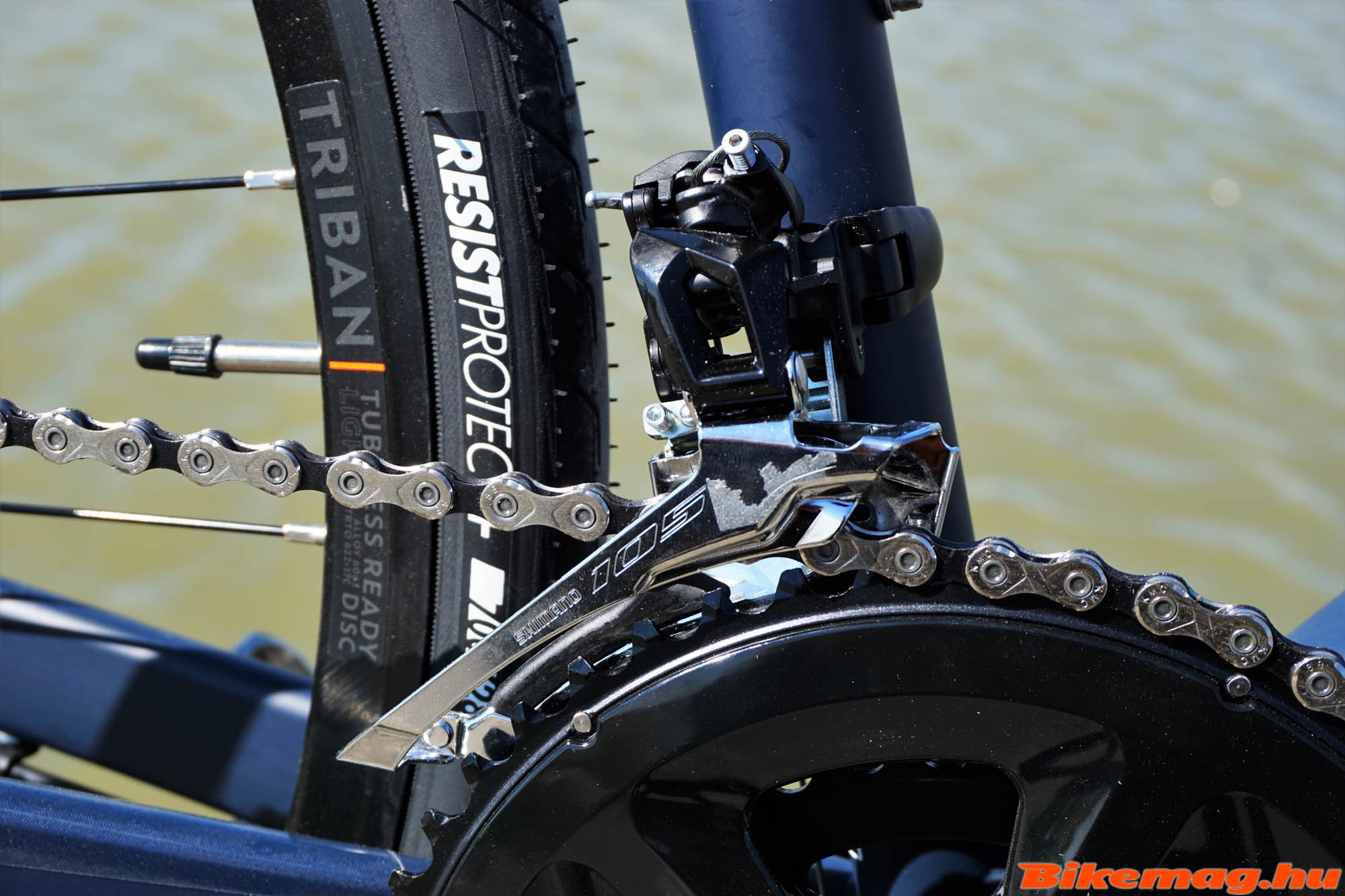 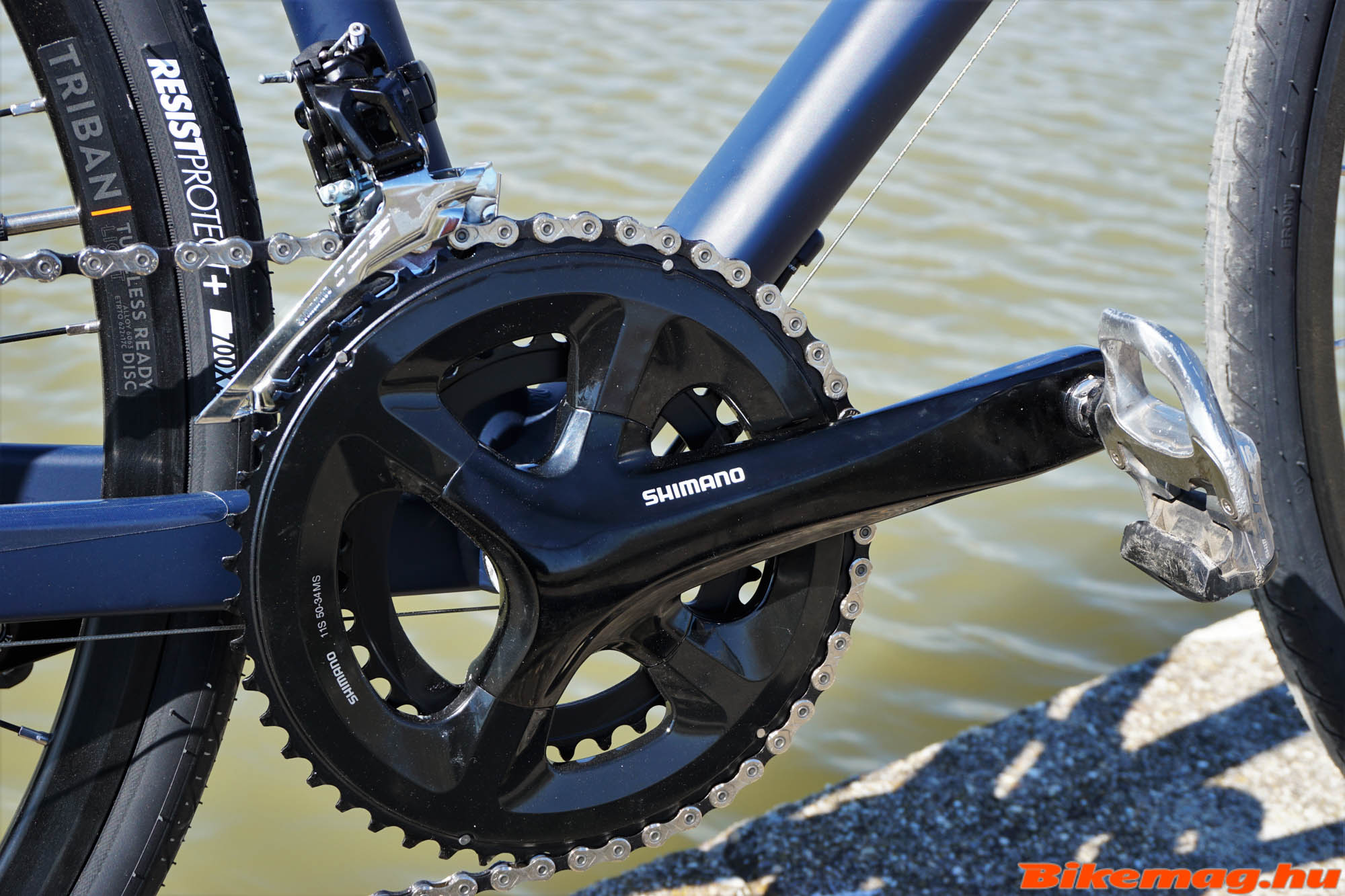 Otherwise the construction of the frame is about keeping everything as simple as possible. The cables are not internally routed, though the seat stays follow current trend as they’re dropped to enhance comfort and frame strength. The design is quite sporty and dynamic: at first glance one would not readily pigeonhole the Triban RC520 in the now trendy endurance road bike category. And certainly no one would recognize it as a big box store’s offering, since the design and the finish are all top-notch, emphasizing high quality over pure value for money. 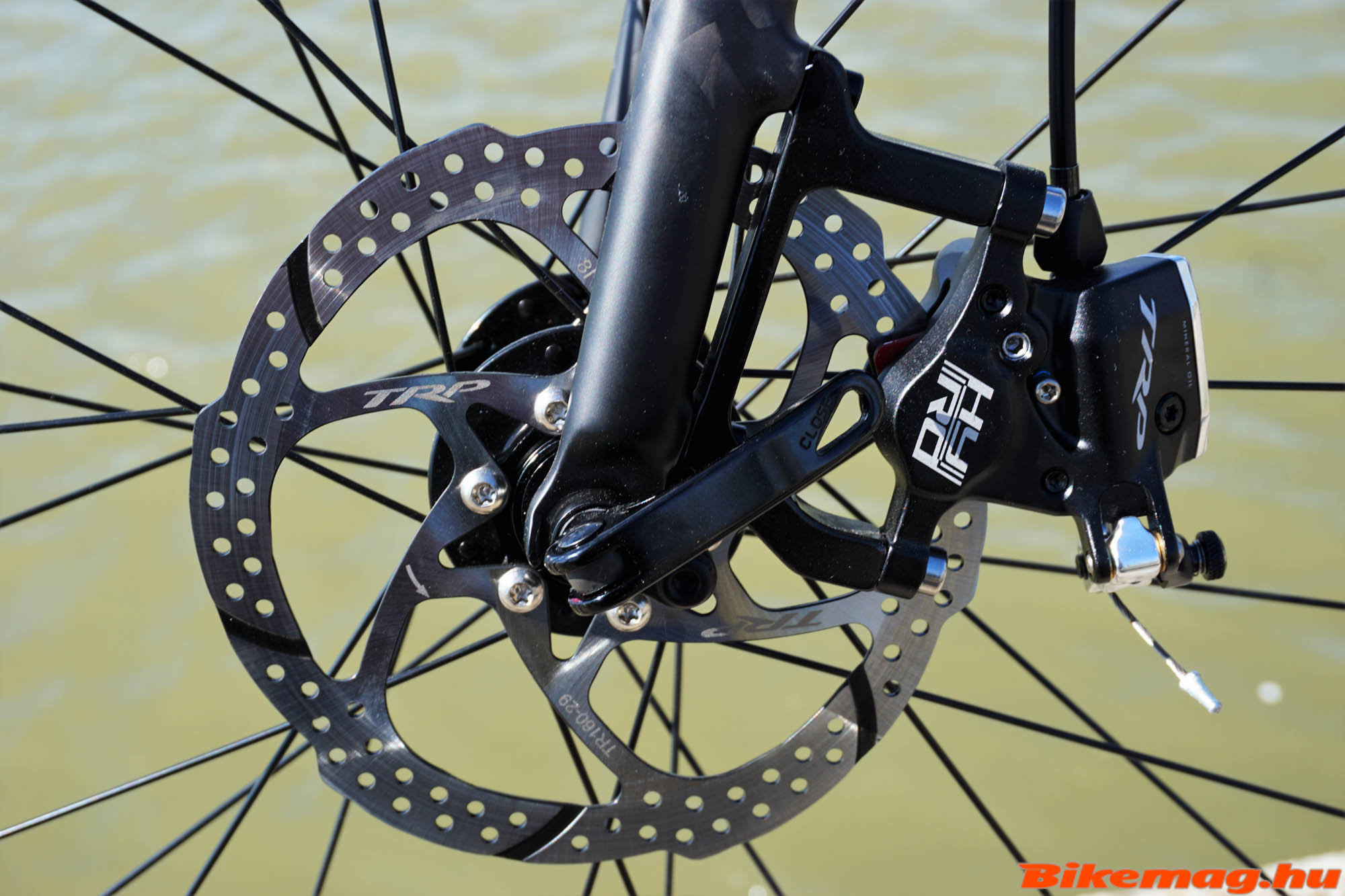 Concerning the equipment choice, we see the mix and match approach by Decathlon. The designers chose the best possible value for this bike without compromising on performance. Shimano’s brand new 105 road group gear shifters fit the bill perfectly, offering the highest level on mid-price market segment. These excellent parts are paired with a non-series crankset from the Japanese giant, which are a little heavier than the 105 equivalent, but offer the virtually same shifting performance. This is a compromise I can certainly live with at the price, and admittedly other bike renowned brands also follow this approach in order to save on costs. 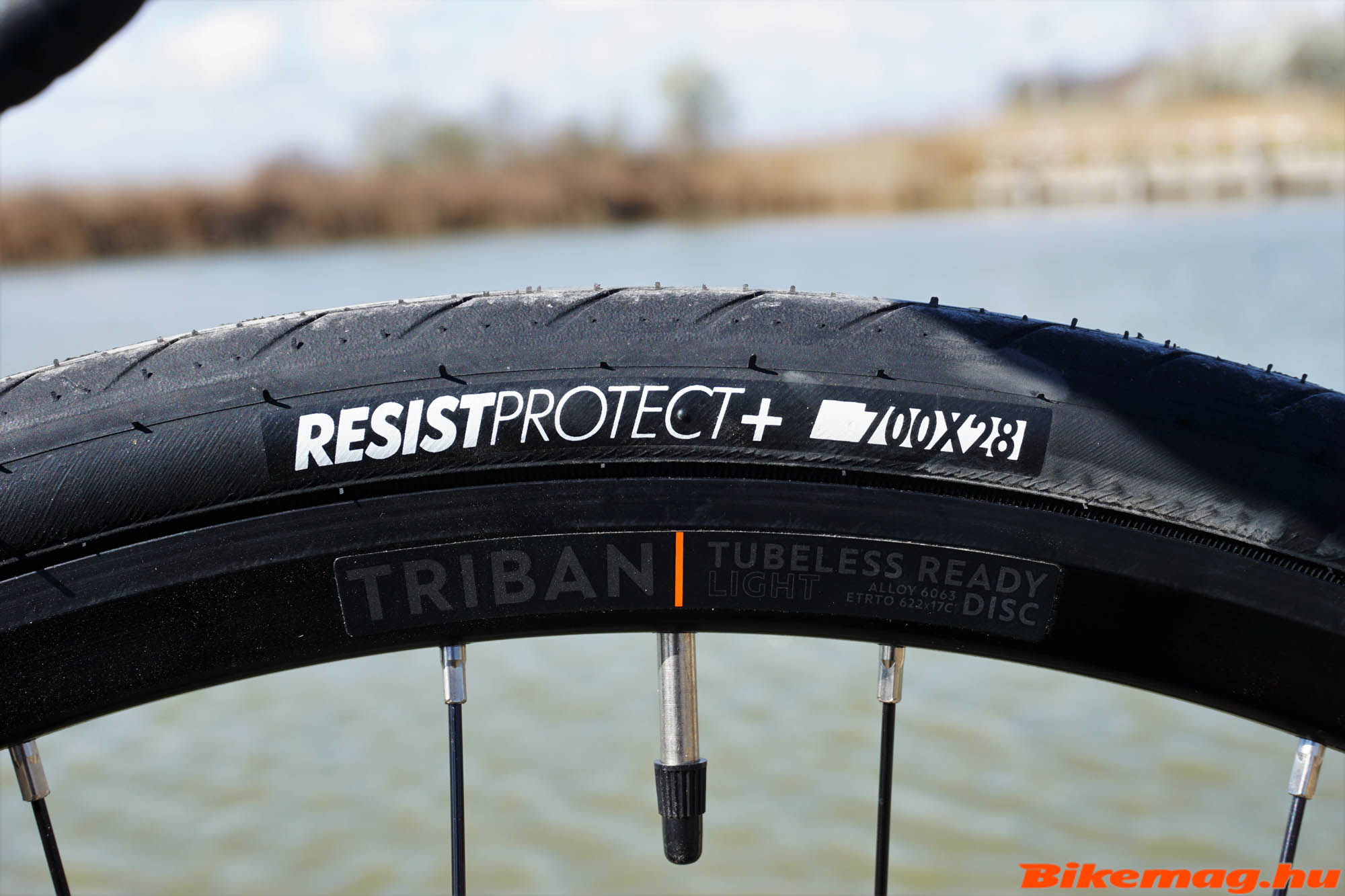 When it comes to stopping the bike, the Triban RC520 employs a hybrid system for the disc brakes, as the mechanical Shimano 105 brake levers operate TPR hydraulic pistons at the caliper end. This ensures that brake feel will be similar to the higher end full hydraulic setups while saving the cost entailed by the more complicated hydraulic brake-shift mechanisms. Similar setup is employed by Giant, the largest and one of the most prestigious bike brands. Another advantage of this approach is easier service and maintenance, which is always welcome in case of bikes predominantly designed for leisure riding. The only disadvantage I can see is the unusual appearance of the TRP brakes, being somewhat larger than other hydraulic calipers. Otherwise I found the brake performance to be more than satisfactory.

The wheels are robust but simple affairs, bearing the “Made in France” logo as a side-note. They should be up to task even fully loaded during a bike tour, but they are certainly not the lightest hoops on the market. The all-purpose tires are also quite heavy and hard to accelerate, but likely to offer better durability, good mileage and hopefully protecting you from punctures. I would be happier to see thru-axle wheel mounting instead of the conventional quick release setup, but that’s something no manufacturer could have realized at this price. 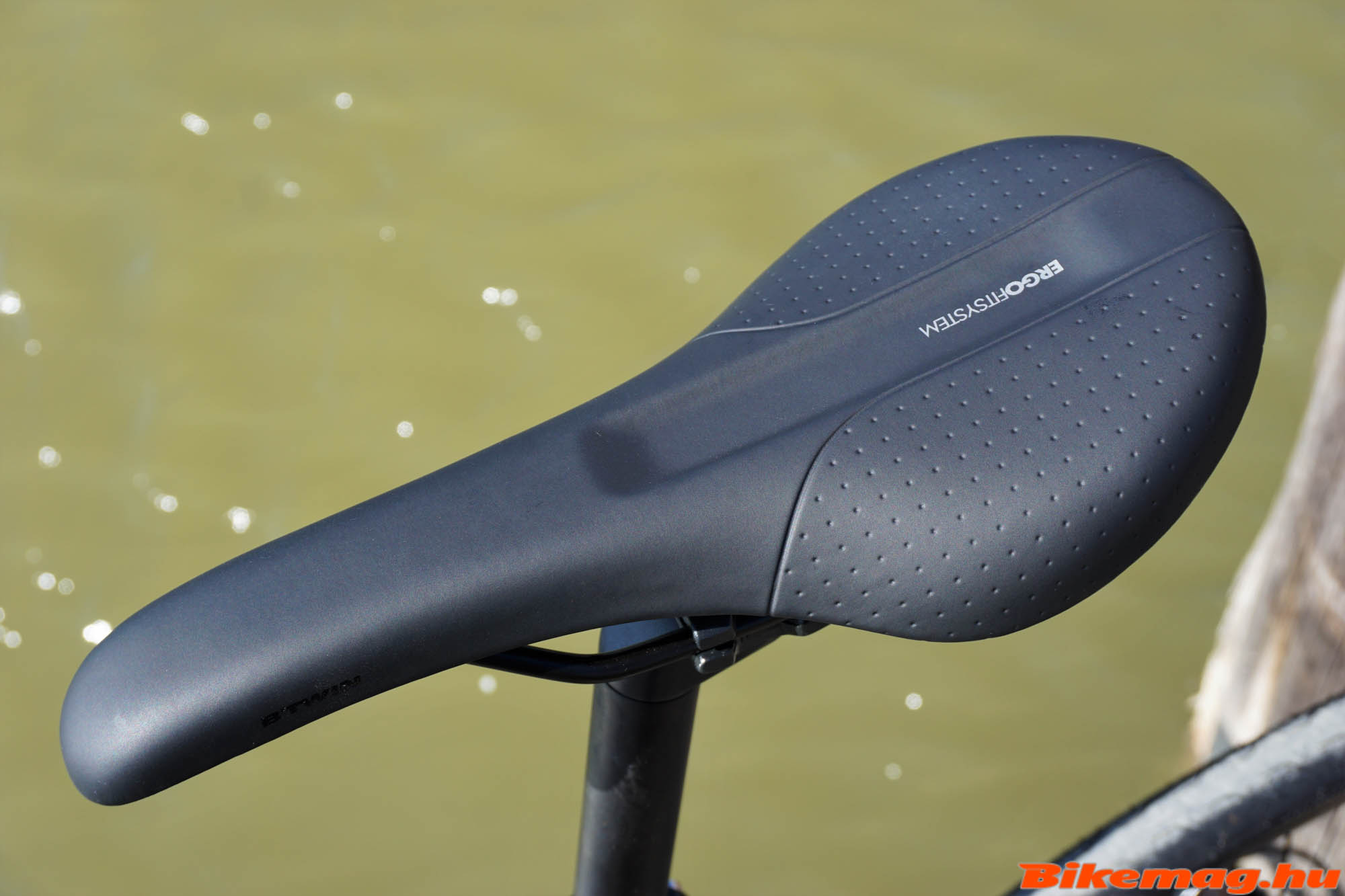 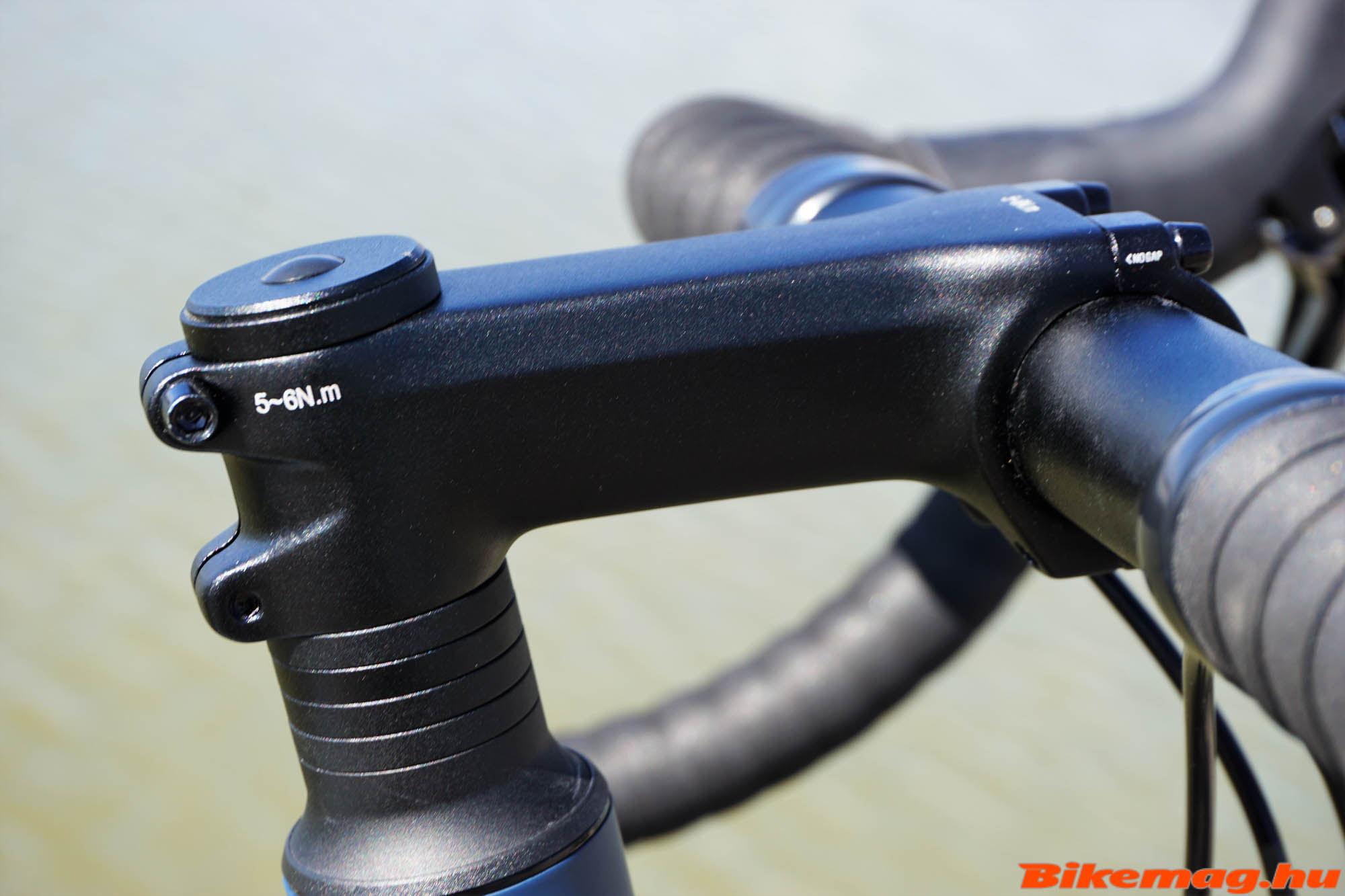 The accessory parts on the Triban RC520 are generally in-house branded pieces, selected from the premium level. I think the saddle is originally a Selle Royal model made especially for Decathlon, and the stem is also reminiscent of a model I have seen on many other test bikes previously. I’m certain that it’s the same one found on a bike that costs four times the price of this RC520.

I must disclose that I’ve actually tested this Triban model twice. I rode this exact model in France in January, and recently I have received the one you see in this review in early summer. The peculiarity of the first test ride was that I also had a chance to ask questions from the engineers responsible for the development of the Triban range. As this same frame is available in a gravel bike version, I was curious to know about the logic behind this concept. I was told that for 2020 Decathlon will have a dedicated gravel bike, for the time being the road touring bike frame fills a void in the Triban range. Essentially the frame has plenty of space to fit wider tires than what is customary on a touring bike, it also has long chain stays and relatively slack head tube angle, so most riders are utterly satisfied on how it performs in off-road environment. Yet this design will continue as the dedicated road-only version. 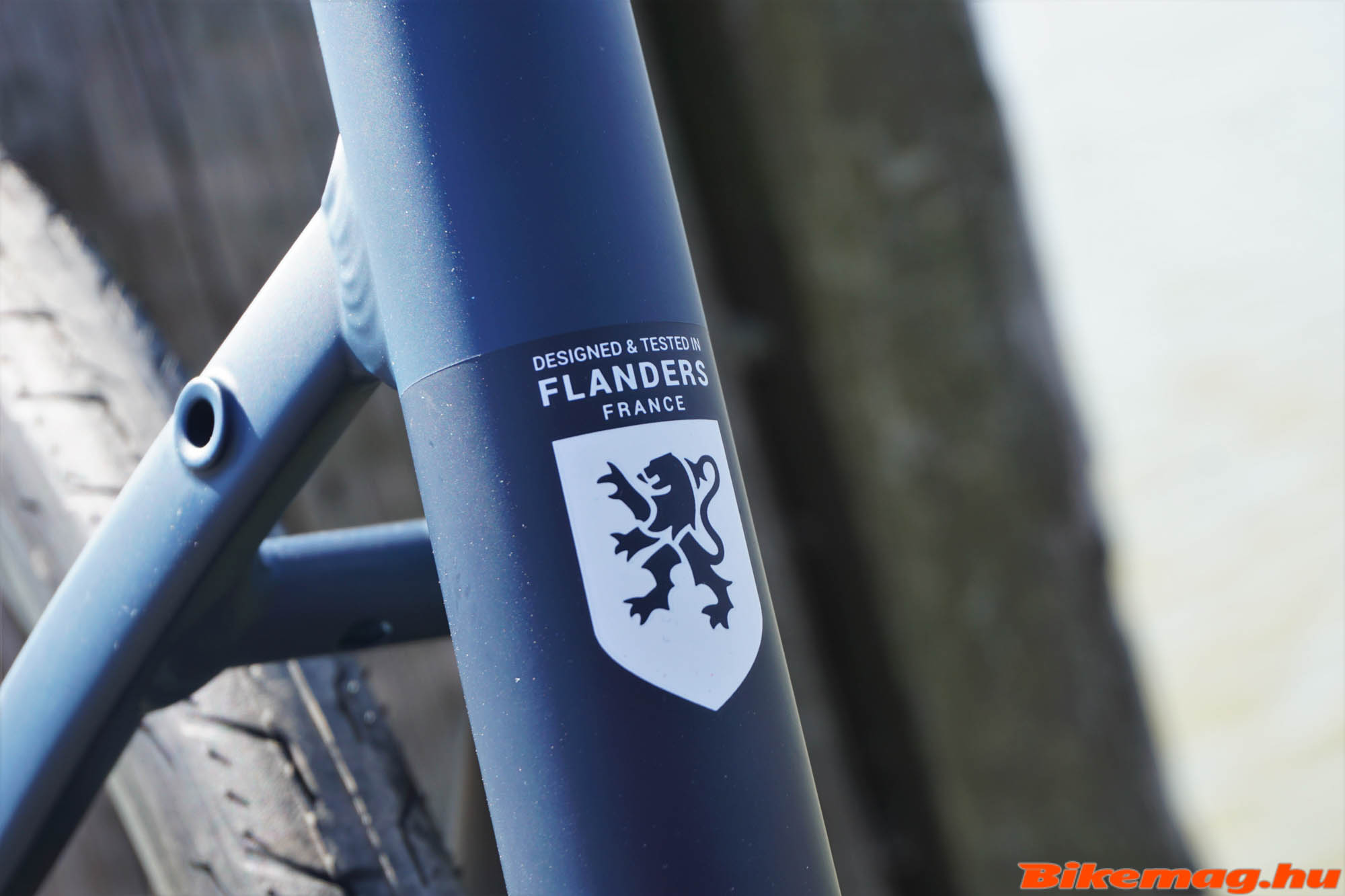 During the winter rides on the RC520, I was transitioning from my road training bike, while for this review I was swapping my light performance road bike for the Triban. This make quite a bit of difference in the ride experience. Previously I haven’t noticed the extra mass of the Triban RC520, but now it’s evident that it’s no lightweight. It’s actually somewhat sluggish when compared to a nimble carbon road bike, and it was certainly not designed to be ridden over a 40km/h tempo. It’s a genuine touring bike, offering stable but at the same time relatively slow handling, with emphasis on sturdiness as opposed to agility. 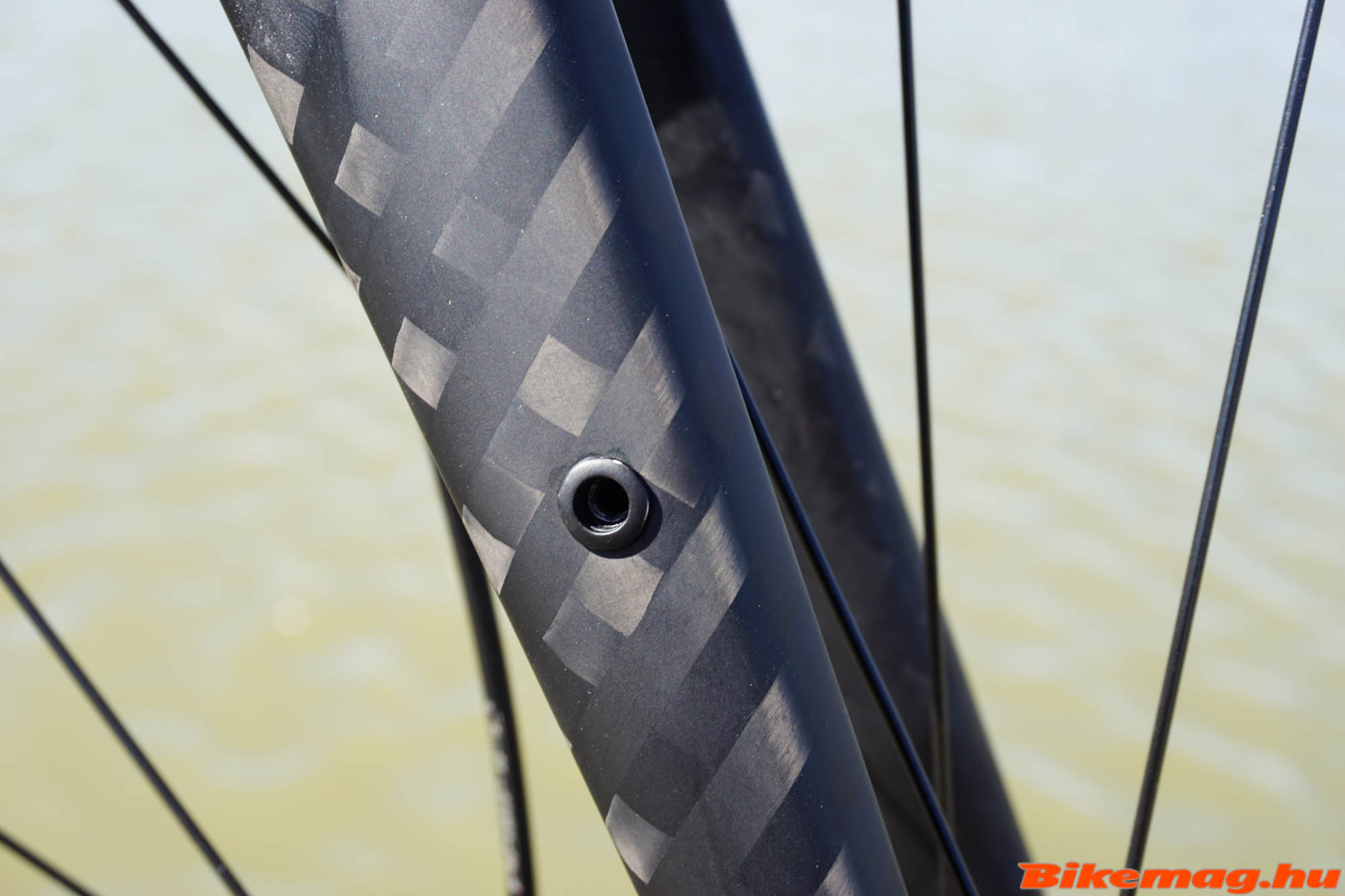 Eyelets to mount bags on the front fork as well as the back!

Despite all the reservations above, the Triban RC520 is a bike that I became very attached to. I know it’s “only” a Decathlon bike, but it sets an example the way it’s been designed and assembled. The design is also up to date, it offers good comfort and handling, and it’s sturdy enough to take to the end of the world and back. Best of all, it’s accessible to most bike riders, with the greatest appeal to those who’d like to see more than just the familiar street in the neighborhood. This bike is an enjoyable partner both out on the main roads, on busy streets in the city, and does not disappoint when venturing off-road on built gravel and dirt roads. In Hungary, where the typical bike lane consists of broken asphalt slashed by tree roots and random potholes, a rugged bike like the Triban RC520 is a real blessing. It offers much better control and safety. Of course there are some aspects of this bike that could be improved upon, but at the price, the present configuration is probably the most one can reasonably expect. Undoubtedly it represents the best value for the money by a country mile. Yet if it was mine, I would change the tires for something more supple and light for sure, which would bring about major improvements in ride quality. 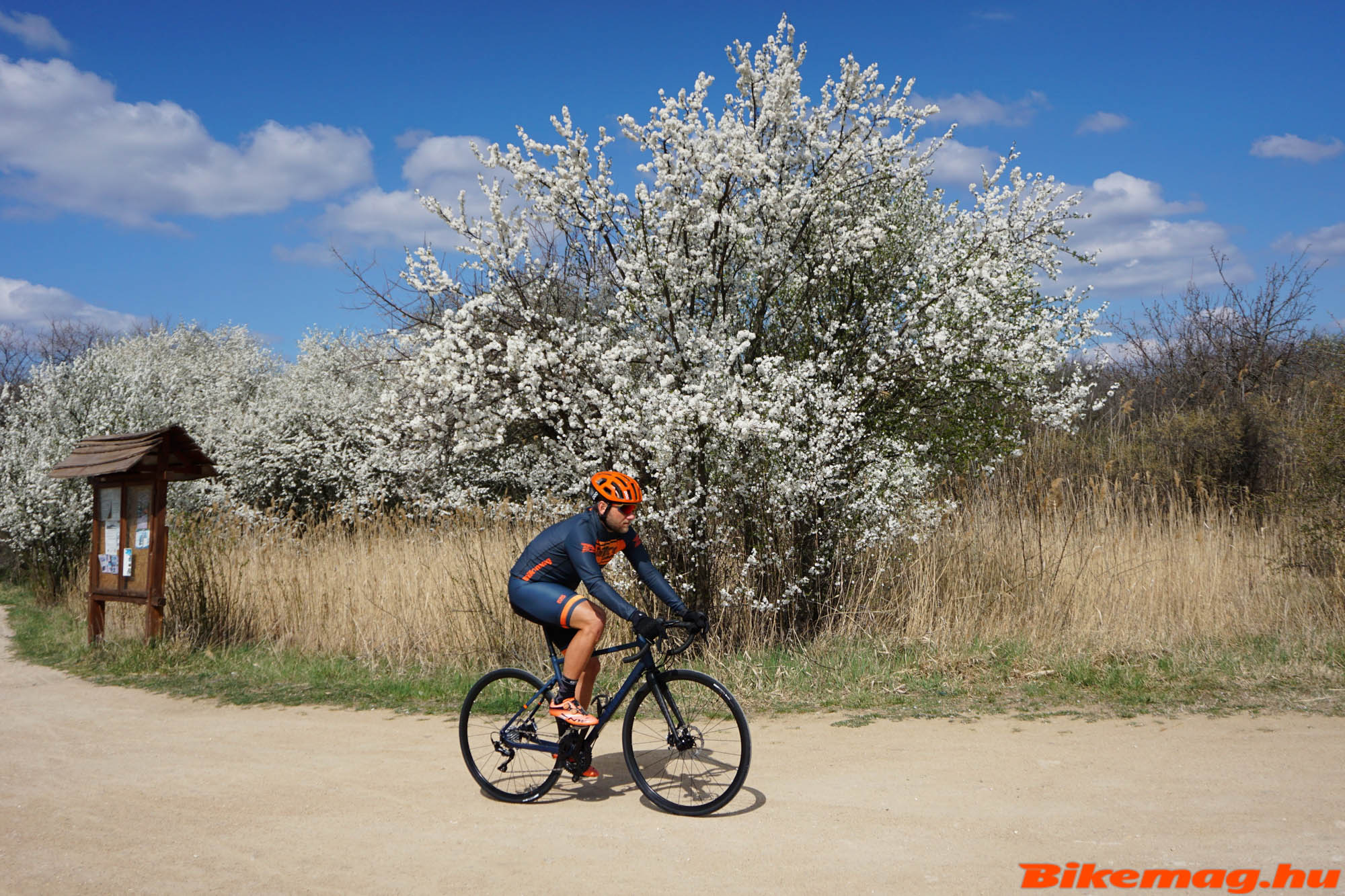 The Triban RC520 is much more than a road touring bike. This year it can be purchased both in the setup seen here and in a more gravel-oriented version. For those seeking the latter, I’d suggest to wait until next year when the dedicated gravel bike will be introduced to the Triban range. The present version can easily handle most maintained gravel roads, but the head angle might be a bit too steep to offer the needed comfort for longer off-road rides – especially on uneven surfaces and hiking trails.

On the other hand, the Triban RC520 is a great choice as a commuter, since it can carry a lot of things, even the complete shopping on the way home. While in Great Britain the drop handlebar tourer is frequent sight on the city streets, not my people Hungary ride this type of touring bike to commute in the cities. Even though it’s much quicker than a flat bar city or trekking bike, offering similar comfort and handling. You can easily ride 50-60 km on poorly maintained roads aboard the Triban RC520, it’ll not let you down and can carry a lot of stuff. No wonder the RC520 is a huge success in England! 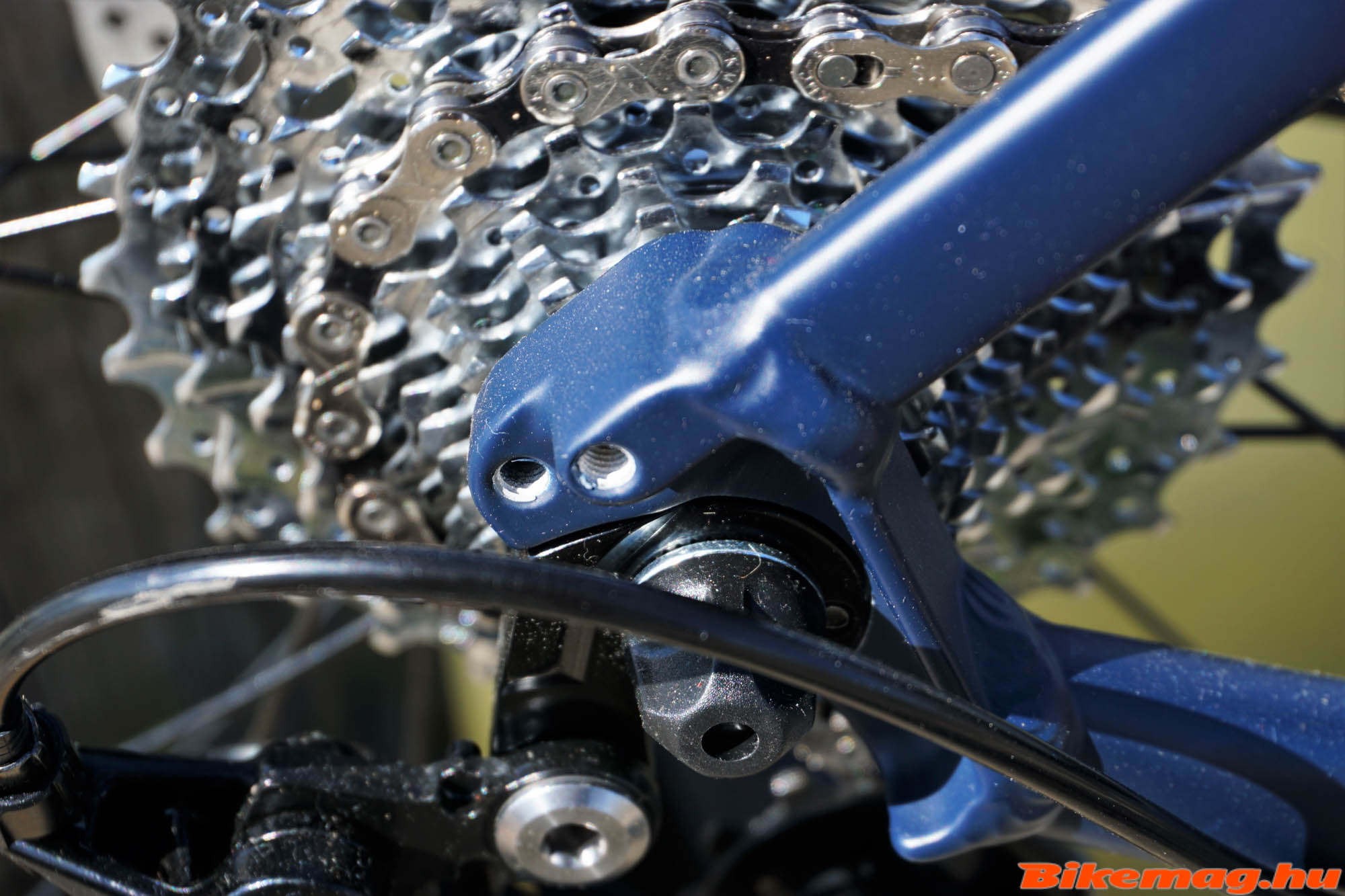 Eyelets to attach a rack and mudguards.

All in all, the Triban RC520 represent an excellent value and offers a different take on the usual trekking tourer we’re accustomed to here in Eastern Europe. It’s available in several build, some much less expensive than the present one on test. For example the RC500 shares this fine frameset with some lower-ties components, in case your budget cannot stretch over HUF 200,000.

More information can be found on the Decathlon website.